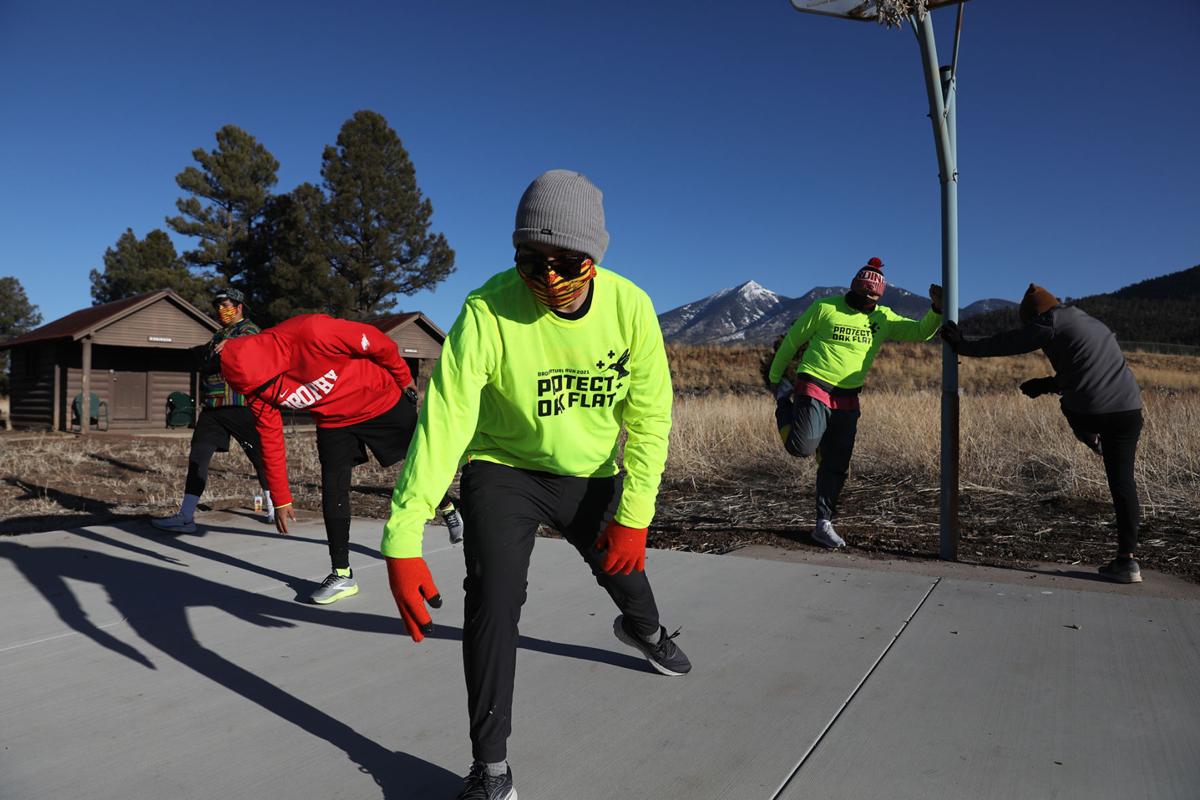 Andrew Reed, 15, center, warms up with fellow runners from Brophy Academy early Thursday morning before taking part in a protest run to Oak Flats in order to protest mining operations there. 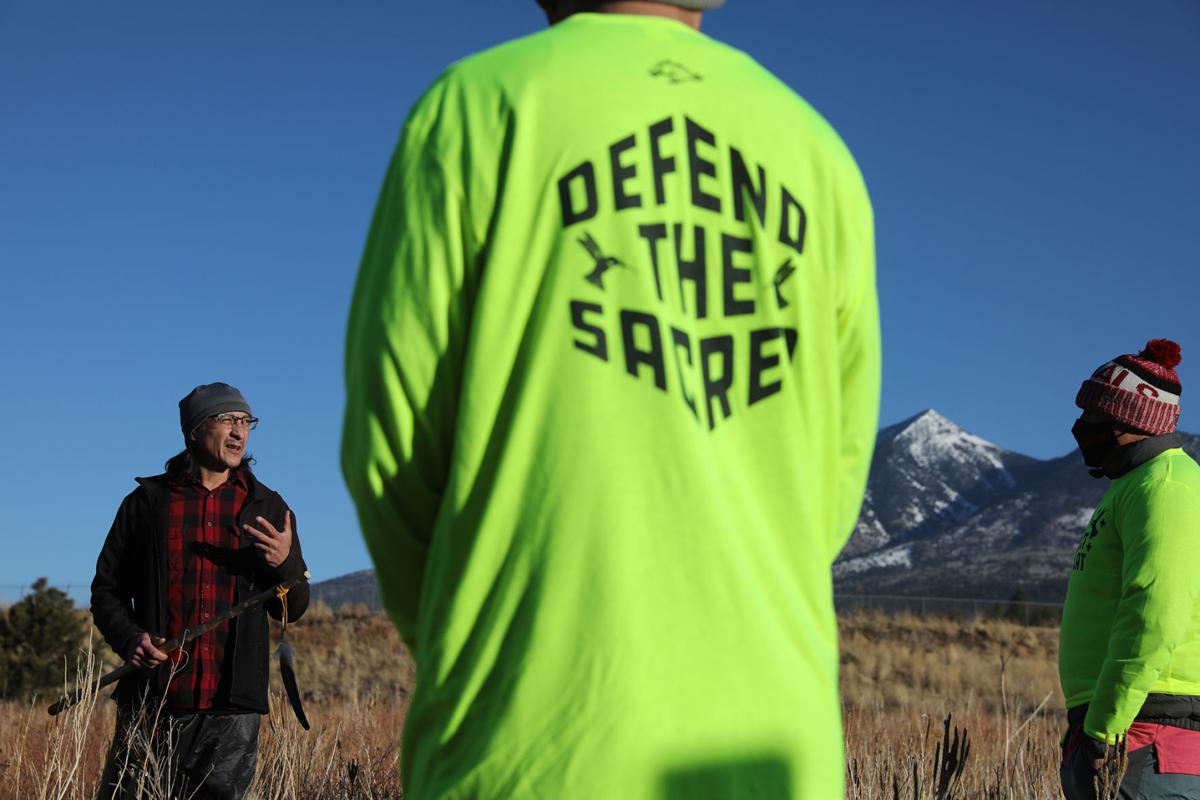 Ed Kabotie talks with runners from Brophy Academy before the start of a run to Oak Flat in protest of the mining of the area. Kabotie ran the first portion in Flagstaff. 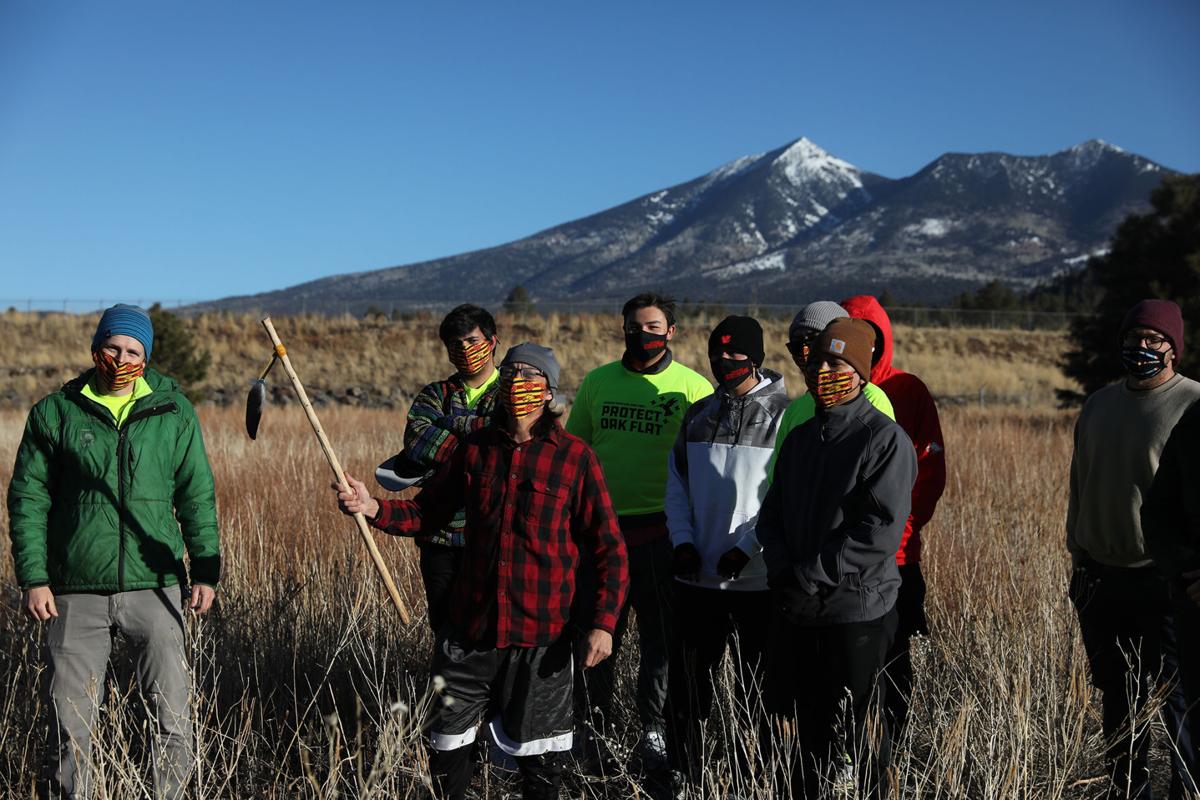 Ed Kabotie stands with runners from Brophy Academy before the start of a run to Oak Flat in protest of the mining of the area. Kabotie ran the first section in Flagstaff. 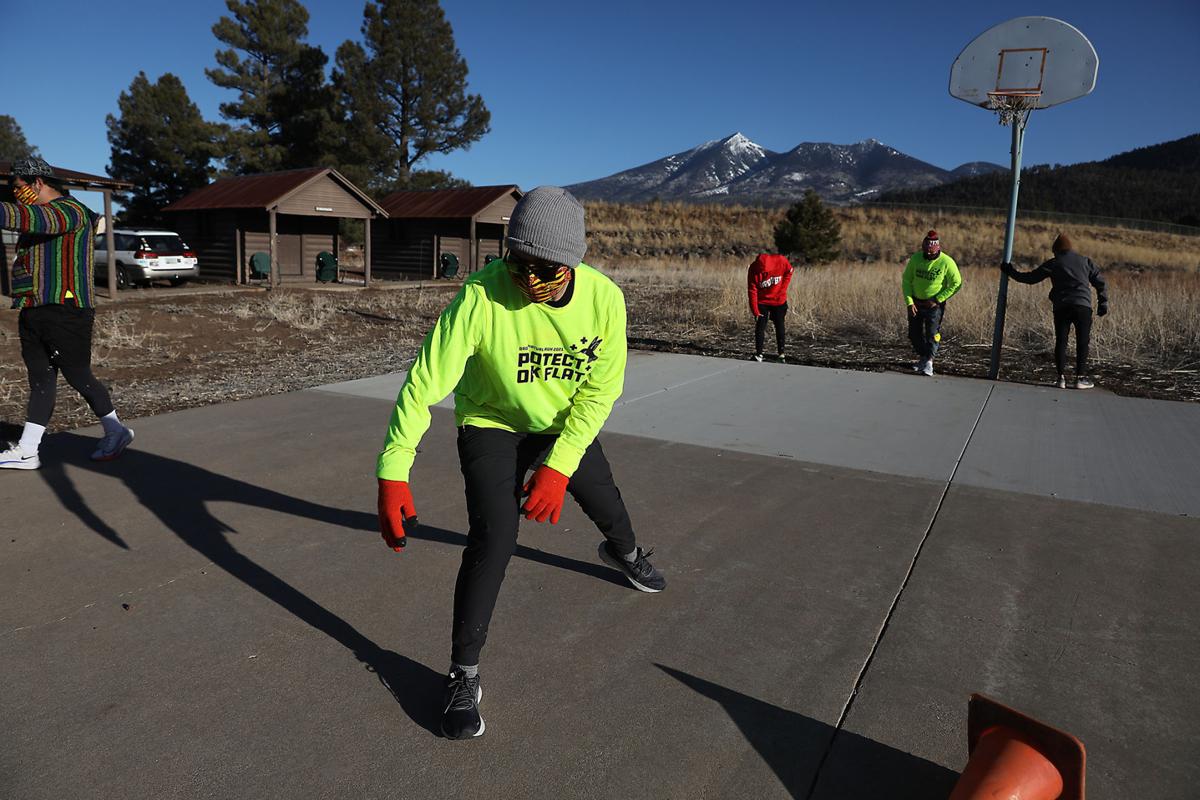 Andrew Reed, 15, center warms up with fellow runners from Brophy Academy early Thursday morning before taking part in a protest run to Oak Flat in protest of mining operations there.

In the half-light of morning on Thursday, with the snow-capped San Francisco Peaks beaming at their backs and the sun peeking over the horizon in front of them, Native American students from Brophy College Preparatory gathered in a field for a blessing before embarking on a journey to try to preserve sacred land under threat.

These seven students, members of the high school’s Native American club, all wore T-shirts emblazoned with the message “Protect Oak Flat” on the front and “Defend the Sacred” on the back. They stood in a line staring off into the distance, their breath making thought-clouds in the 20-degree chill.

In a few minutes, they would begin running, not fast and not for competition, but for a purpose: to draw attention to what many Indigenous leaders believe will be the desecration of land sacred to the San Carlos Apache if a government plan to allow copper mining at Oak Flat, east of Phoenix, moves forward.

Over two and a half days, these boys — activists, not athletes — will run, walk or stagger 188 miles to the site in question, joining three other Native youth running groups organized by the Apache Tribe.

But before they set off, the runners took part in a blessing ceremony near the foot of another sacred site, the Peaks. Leading the service was Steve Darden, commissioner of the Navajo Nation Human Rights Commission and a longtime advocate for tribal rights.

“Along the way,” Darden told them, “you’ll run through places where the clan offerings will guide you, and you’ll make offerings, too. You are going to be using your body. But, most important, you’re going to use your spirit.”

The Brophy boys, who will take turns carrying a sacred staff with an eagle feather given them by Apache elders, then spread ceremonial corn pollen onto the earth and bowed heads as Darden gave a blessing and sang a “journey” song. At last, before a socially distanced crowd of supporters, the runners made their first steps, joined for the first 3 miles by noted Hopi and Tewa musician Ed Kabotie.

Cooper Davis, an advisor at the Jesuit school, said Brophy’s Native American club jumped at the chance to be one of four schools running to Oak Flat from different sectors of the state, all converging on Oak Flat Saturday for a night of prayer and education. When representatives from Flagstaff could not participate, Brophy stepped in to fill the gap.

“Most of our runners are Navajo, and a lot of them have roots in Flagstaff, plus (Brophy) had connections with the Museum (of Northern Arizona) and with Steve Darden,” Davis said. “We’re really excited that we can be the ones to come to Oak Flat from Flagstaff.”

Brophy students have studied the controversy and hosted Zoom meetings with representatives from Apache Stronghold, the native organization that has been trying to years to block the sale of land the U.S. government has decided can be used to mine copper. When the transfer happens, burial sites, petroglyphs and ceremonial grounds will become private property of mining concerns.

Oak Flat’s exposure to mining came via a land swap engineered in late 2014 by then-Sen. John McCain, who tacked on a rider to the National Defense Authorization Act that opened 2,500 acres to mining, much of it at Oak Flat, just west of the San Carlos Apache Indian Reservation. Litigation to block the move has failed, and now the way appears clear for Resolution Copper, owned by international mining giant Rio Tinto, to begin the process of starting a mine. The company reports that further permitting and a feasibility study remain to be done and that campground access at Oak Flat will remain open.

This will be the seventh year that the Apache Stronghold organization has staged the spirit run to draw attention to the efforts to overturn the order. But, barring an unexpected legal reversal, it might be the last before heavy equipment begins work.

None of the Brophy students participating in the run has visited Oak Flat, yet. But they said the issue resonates with them, given the long history of Native lands being lost or used for the purposes of mining natural resources.

Jaymz Wallen, a Brophy senior who was born in Chinle and lived in Flagstaff before moving to the Valley, decried what he calls the shortsightedness of copper mining, in addition to the cultural desecration of doing it on ground the Apache considered sacred.

“It’s corporations getting greedy for their money and resources,” Wallen said. “There’s actually not that much copper in the ground and the amount they are taking out of the land is less than 10%. But it’s the way they’re extracting it. It’s efficient for them, but it’s devastating to the land. The waste they create could possibly contaminate water sources or nearby cities.”

“You know, there’s only so much copper in the ground so, of course, they’ll go right out once they’re finished and just leave all their equipment and leave a huge hole, a big scar,” Wilson said. “It is kind of a desecration, I think.”

In addition to the staff and eagle feather bestowed upon them by the Apache, the Brophy runners will each carry a sacred object personal to them. For Wallen, it’s a necklace passed down from three generations of his family on his mother’s side.

Wilson? Well, he was still searching for an object of his own.

He was more concerned with enduring the 188-mile journey.

But, as Wallen noted, “it’s all about the journey and the symbolism of it.”

Andrew Reed, 15, center, warms up with fellow runners from Brophy Academy early Thursday morning before taking part in a protest run to Oak Flats in order to protest mining operations there.

Ed Kabotie talks with runners from Brophy Academy before the start of a run to Oak Flat in protest of the mining of the area. Kabotie ran the first portion in Flagstaff.

Ed Kabotie stands with runners from Brophy Academy before the start of a run to Oak Flat in protest of the mining of the area. Kabotie ran the first section in Flagstaff.

Andrew Reed, 15, center warms up with fellow runners from Brophy Academy early Thursday morning before taking part in a protest run to Oak Flat in protest of mining operations there.