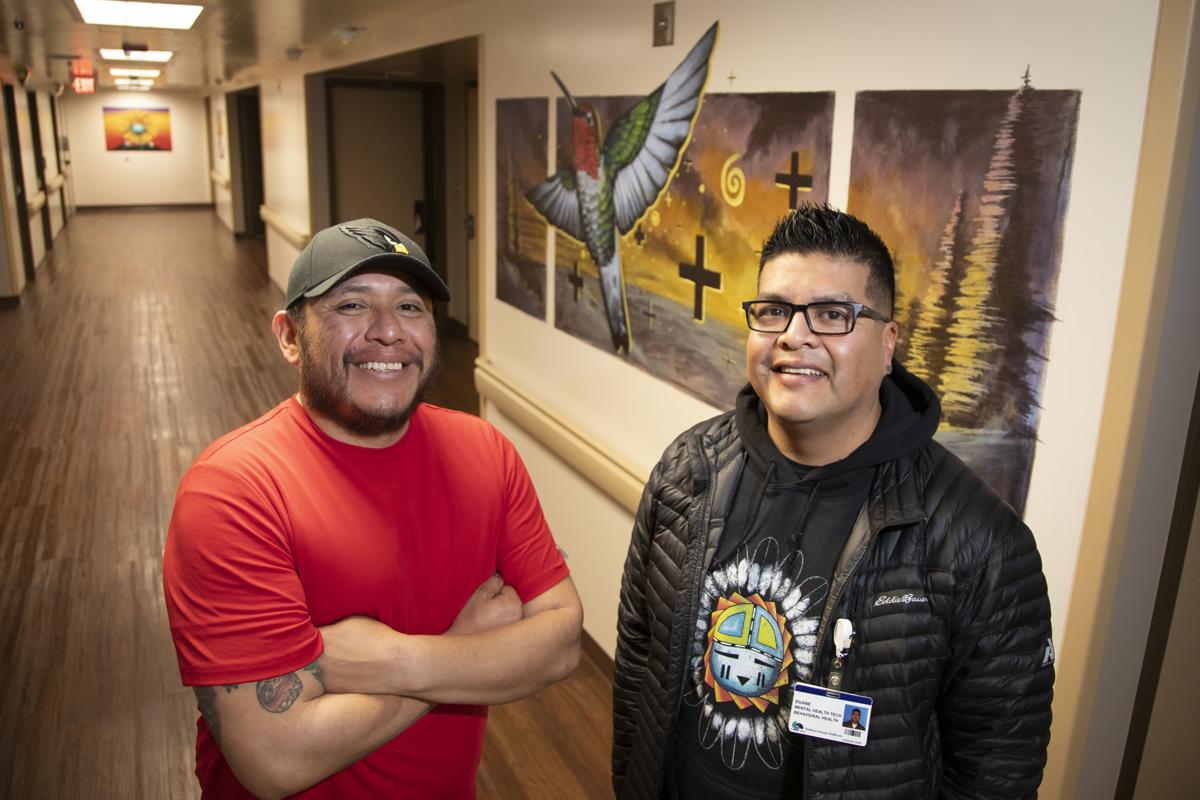 Landis Bahe (left) and Duane Koyawena stand in front of their mural in the Flagstaff Medical Center's Behavioral Health Services inpatient unit. Bahe, Koyawena and other artists painted several pieces in the unit's hallways in an effort to help patients through trying times. 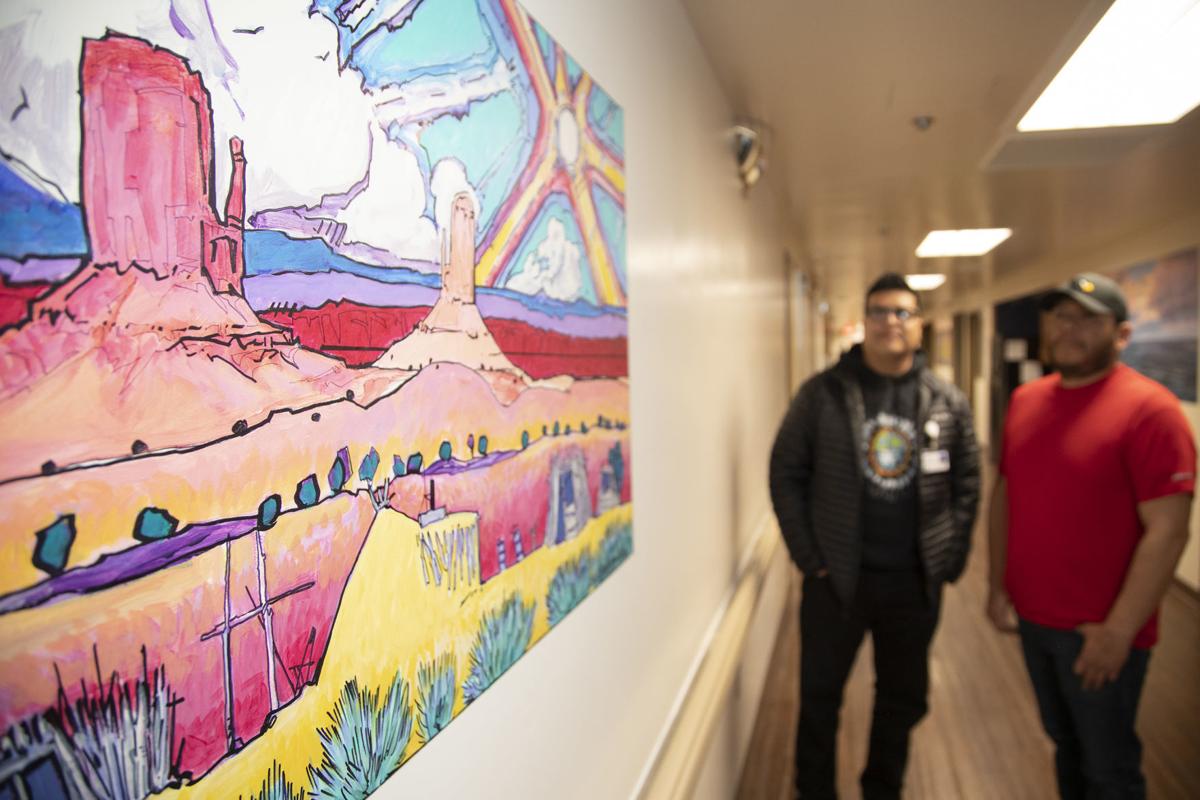 One of several new murals in FMC's Behavioral Health Services unit provides a pop of color in otherwise nondescript hallways.

Yellows, reds, blues and greens meet to form mountains, buttes, sky, stars and trees. Clouds and water remind the viewer of open spaces, of life. You can almost smell the pines, perhaps wood smoke drifting on a breeze.

The scenes are serene, warming—healing.

Artist Duane Koyawena, who is a NAH staff member on the inpatient unit and painted two of the murals on the hall, said the space has specific criteria for the placement of art—primarily, there can be no hanging pictures that can be removed by the patients. He reflected on the space and wanted to carry it beyond the clinical, the antiseptic.

“I was thinking, ‘Wouldn’t it be neat for local artists to paint on the walls?’” Koyawena said. He added that he was all for approaching the project alone, but believed other styles and talents would give the project more of an eclectic view for patients.

His boss was on board, so he contacted fellow artists Landis Bahe, “Mural Joe” Cornelius and Baje Whitethorne Sr. They all agreed to share their time and magic, and offer an original wall mural after Koyawena explained who would be seeing—and who would be helped by—the art.

“Initially, I went in there to help and trusted Duane’s vision on that,” Bahe said. “But as I was there and saw the impact it would have on the patients and the staff, working side by side… I made the right decision to come out here to do this. It was really rewarding.”

Kim Alexander, NAH director of Behavioral Health, said that after the renovation, the walls came off as sterile and institutional, so, for the sake of healing for the patients and to create a comfortable space for both patients and staff, the artists were invited onto the unit.

“And we’re very pleased with the results,” Alexander said. “Art is very important for the healing of our patients.”

Alexander added that many of the staff, like Koyawena, are artists, and they regularly share their talents with the patients. The unit also has an art therapist on staff to help with the healing process.

Amy Minter, NAH Behavioral Health clinical manager, said the patients, with psychiatric conditions like anxiety and depression, will walk the hall and stop to gaze at the artwork.

“It’s very relaxing for them and helps them take their mind off their problems for the moment,” Minter said.

Koyawena is this year’s Best of Flagstaff winner in the category of local artist. He himself battled substance addiction and knows first-hand some of the challenges faced by the patients in the unit. He said that art, for him, while he was recovering, reminded that there was more to life. The art helped rescue him from the darkness.

“The images remind us of beauty,” Koyawena said “It is real. It is there, and you don’t have to be stuck in that darkness anymore. Life is out there.”

Bahe’s mural is a forested scene of night turning into sunrise, complete with a hummingbird flying toward the heavens, toward freedom. He titled it, “The Center is the Start – From There is Only Growth.”

Bahe appreciates the fact that he was asked to join the mural project and said he had no plan going into the process “because in life, you don’t know what it’s going to throw at you.” He let his creativity do the heavy lifting, and over a three-day period, about nine hours total, the mural emerged. For him, art heals. It healed him, and, with hope, it offers that healing element to the patients.

“It’s beautiful to be a part of that,” Bahe said.

Cami Scott, a mental health technician in the unit, said, “I think there’s a lightness to the unit.”

She added, “It makes me proud to work in a place that allows artists into the unit and share their work with our patients.”

Koyawena said plans are in the works to do the same thing for the juvenile section of the unit after it finishes undergoing renovation.

“I know some people,” he said, and smiled.

One mother to another: Donor breastmilk supports FMC infants

Landis Bahe (left) and Duane Koyawena stand in front of their mural in the Flagstaff Medical Center's Behavioral Health Services inpatient unit. Bahe, Koyawena and other artists painted several pieces in the unit's hallways in an effort to help patients through trying times.

One of several new murals in FMC's Behavioral Health Services unit provides a pop of color in otherwise nondescript hallways.