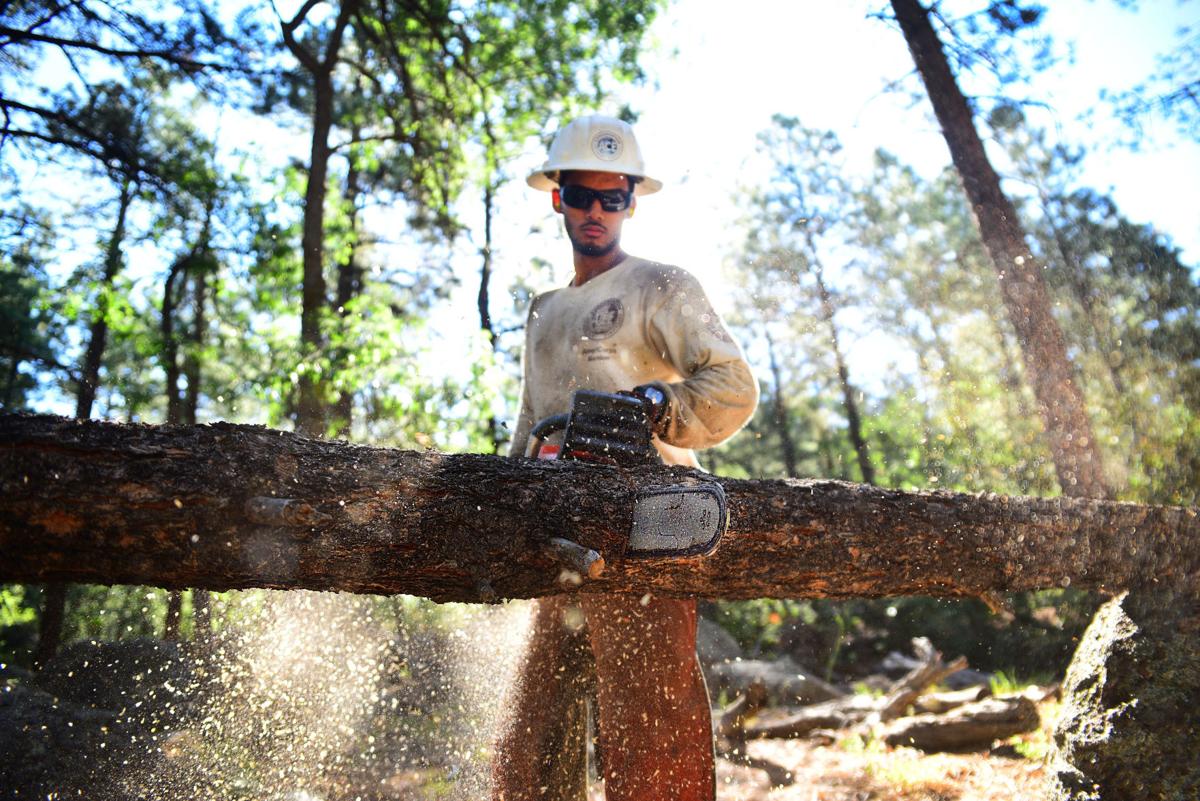 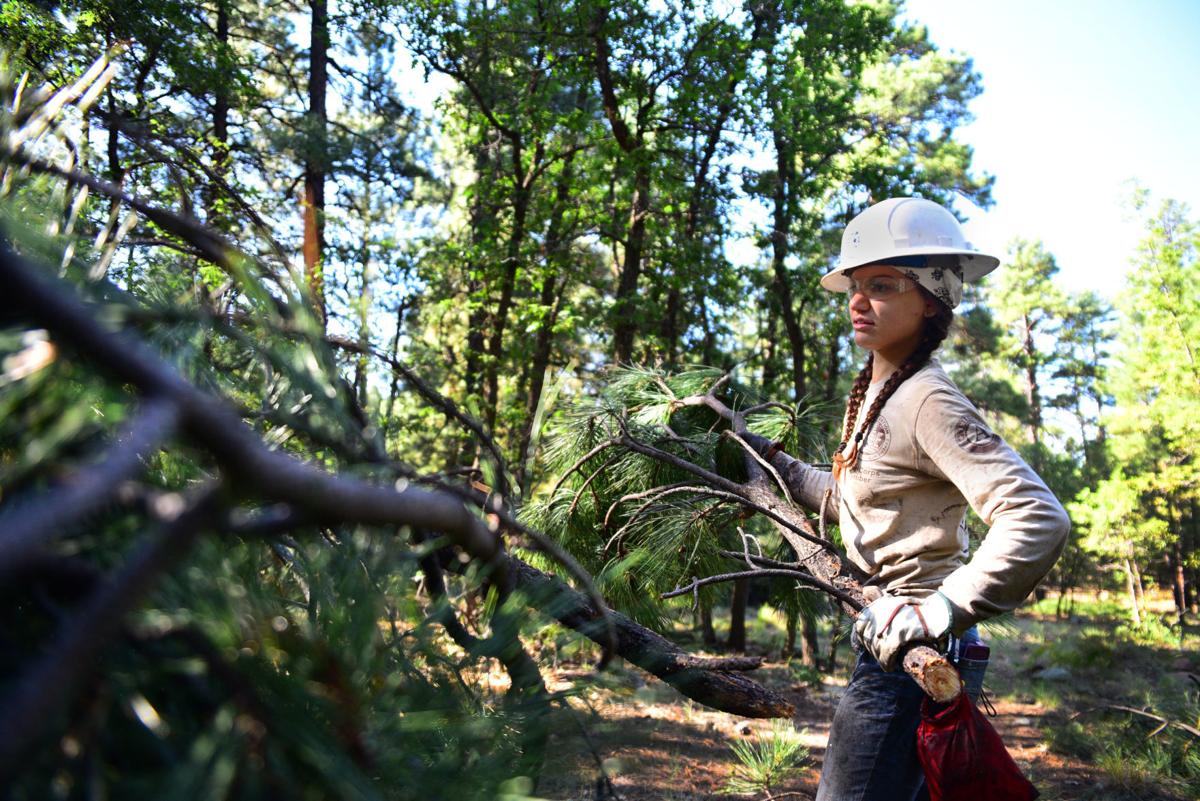 A member with an American Conservation Experience crew works in the forest around Flagstaff. 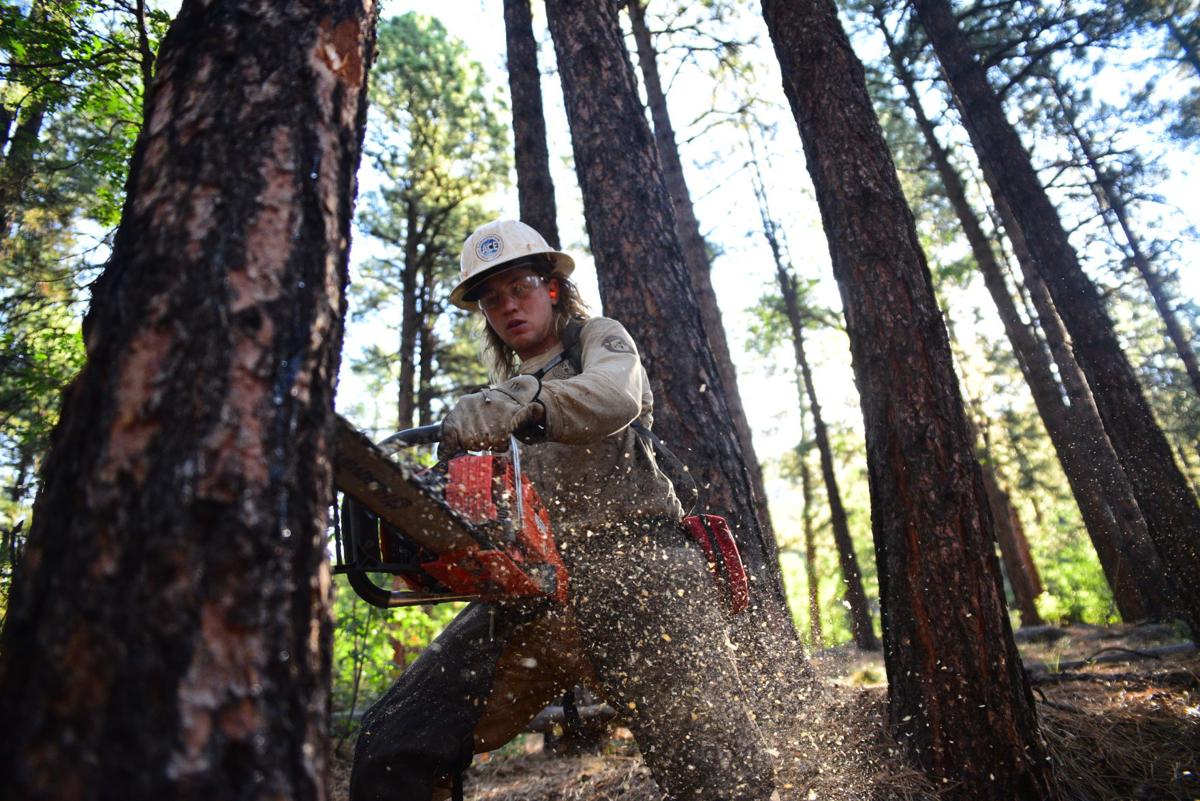 This fall, loggers with feller bunchers, log processors and lumber trucks won’t be the only people at work thinning acres of forest in the Dry Lake Hills as part of the Flagstaff Watershed Protection Project.

Crews of young adults from the nonprofit American Conservation Experience, or ACE, will also be in those woods using chainsaws to thin upwards of 200 densely treed acres on slopes above town.

These workers have become an important part of completing the forest health and watershed protection project as costs have ballooned beyond initial expectations.

In February, the city estimated that the $10 million bond approved by voters in 2012 will pay for about 65 percent of the total project. That leaves a shortfall of $4.5 million to finish thinning in the Rio de Flag and Lake Mary watersheds.

In the face of that funding reality, Jeff Bousson, American Conservation Experience’s national development director, and Matthew Millar, FWPP operation specialist for the City of Flagstaff, are working to multiply the purchasing power of the voter-approved bond dollars to tackle some of the trickiest areas of forest to treat.

"As a nonprofit organization, ACE can apply for a wide range of grants that the city municipal government is not eligible for," Bousson explained. "We want to utilize our resources in order to help them leverage additional dollars and labor."

The result of that cooperation is playing out this fall in the form of three ACE crews that will work on two fuels reduction projects in the Dry Lake Hills and Brookbank Meadow.

The Dry Lake Hills crew started work at the beginning of this week.

The work is funded by grants from the National Forest Foundation, the Arizona Department of Forestry and Fire Management and a dollar-for-dollar match from the City of Flagstaff FWPP.

"ACE's ability to apply for and manage grants on behalf of FWPP makes them an incredibly valuable partner," Millar said. "This allows us to get 200 acres of treatment done at half the cost, in areas too steep and rugged for ground-based equipment."

"The small, steep areas are like untreated gaps between the larger mechanically-thinned tracts," he said. "Hand thinning those places creates more continuous treatment over the landscape, which can reduce wildfire intensity."

High intensity wildfires and the potential for subsequent post-fire flooding pose a huge threat to the city’s core infrastructure and its water supplies. A 2014 FWPP Cost Avoidance Study by the Northern Arizona University’s College of Business and the Alliance Bank Business Outreach Center predicts damages from wildfire and flooding in the Dry Lake Hills would range from $489 to $986 million.

Next generation of forest stewards

After several weeks of training, ACE crew members ages 18 to 35 hike in to the project sites carrying their own gear and camping supplies. They sleep in the forest and practice low-impact camping.

Crews typically work eight-day shifts, felling and segmenting trees that measure up to 10 inches in diameter, then stacking them into slash piles. The piles are burned six to 12 months later by city or Forest Service personnel, conditions permitting.

Crew members receive minimal compensation — a biweekly living stipend between $280 and $512, free meals and housing and an education award — but the hands-on experience becomes a career pathway for some.

"ACE is serving as the minor leagues for land management agencies and the City of Flagstaff," Bousson said.

"Getting the ACE crewmembers experience on the ground -- that's the next generation of forest health professionals," he said.

Of the 4,000 acres still to be treated in Dry Lake Hills, roughly 800 will require hand-thinning, according to Paul Summerfelt, City of Flagstaff wildland fire management officer.

The second project, Brookbank Meadow, is located in the Dry Lake Hills area of the Coconino National Forest but is owned by the Navajo Nation. Private property status makes the parcel eligible for forest health treatment funding from the Arizona Department of Forestry and Fire Management, so state dollars will match bond funding dollar-for-dollar.

Two eight-person crews plan to hand-thin 100 acres at the Brookbank Meadow parcel from September through November of this year.

"Without (ACE) doing that kind of work, it's not going to get done," Smith said. "They can get the funding and they're stepping up to the plate to do the work that nobody else is willing to do at this time."

A member with an American Conservation Experience crew works in the forest around Flagstaff.