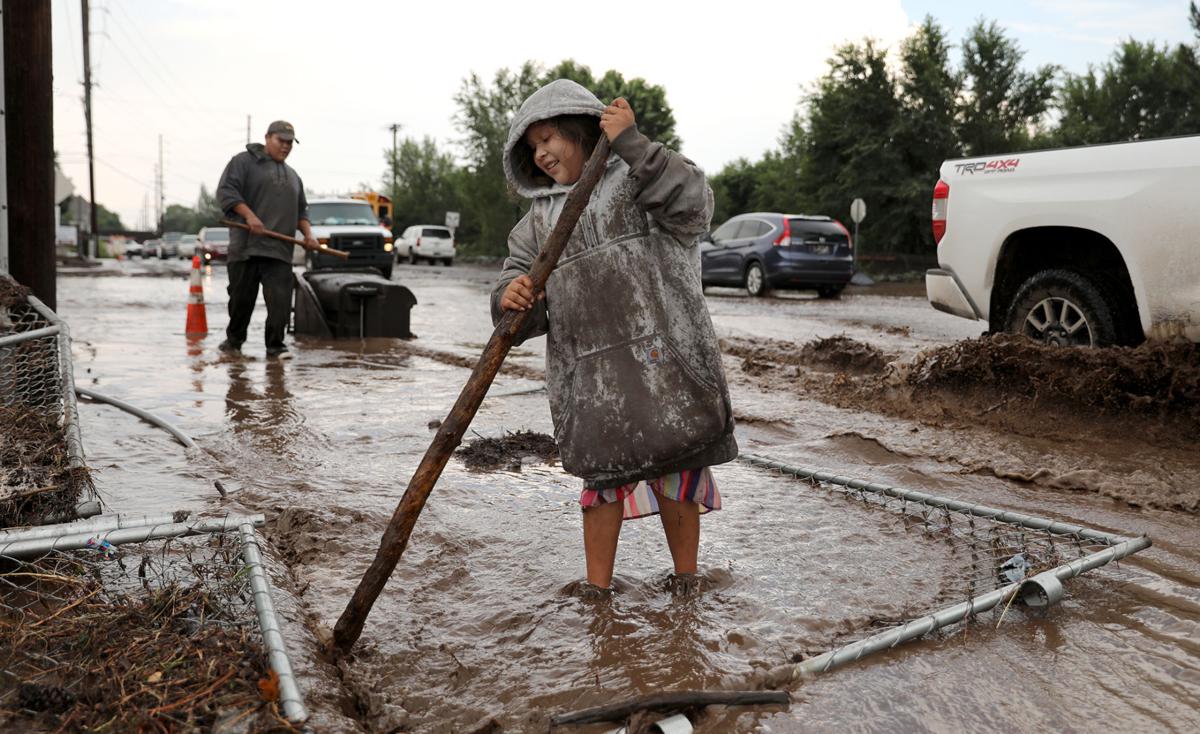 Jazmine Gonzalez, 8, uses a stick to clear debris from a drain Tuesday afternoon as she and her cousin Terence Bahe, 16, worked to clear a sidewalk on Sixth Ave. 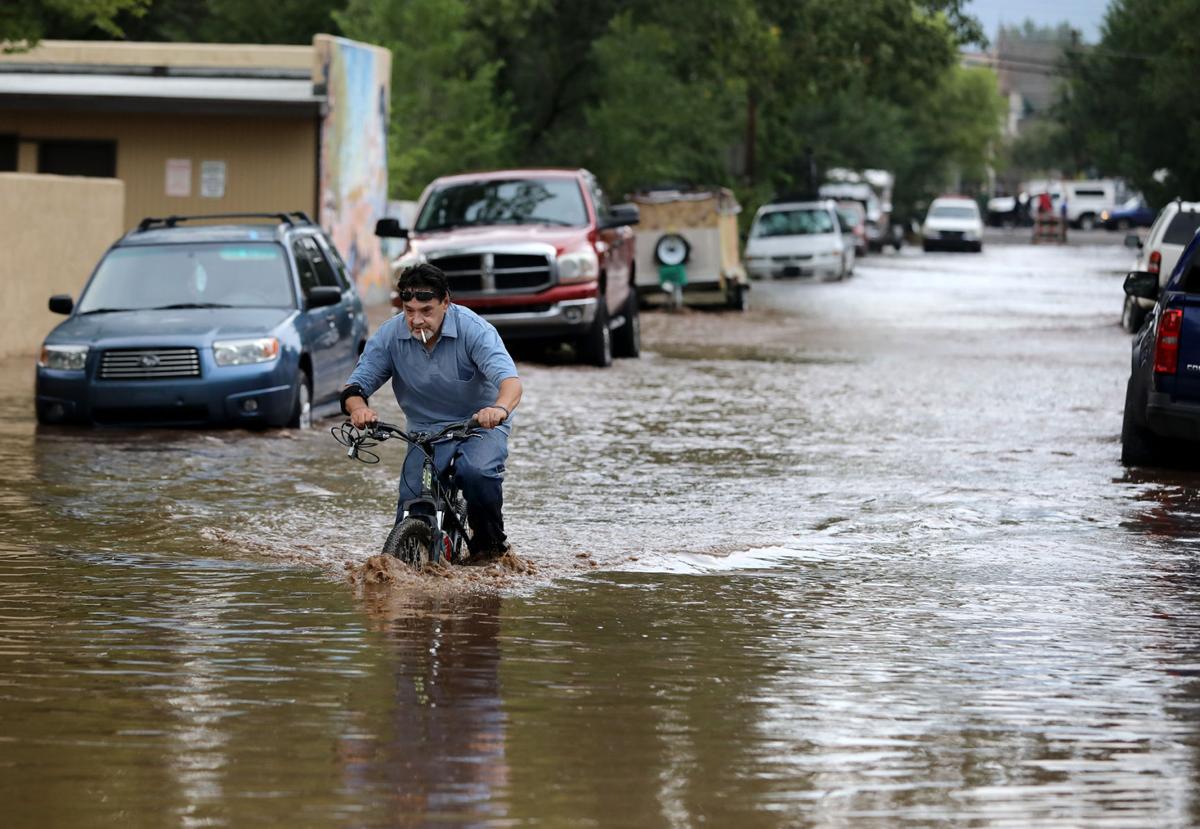 A cyclist makes his way through flood waters on his bike Monday afternoon as traffic in Flagstaff’s Southside was rerouted around flooded streets following the Rio de Flag bursting its banks.

After an active storm week and the largest flooding event on the 2019 Museum Fire burn scar that the county has seen this year, local leaders and storm water engineers say they plan to hold a brainstorming summit to discuss what more can be done to help mitigate debris flows in the future.

And Andreani said the summit will provide an opportunity for officials to bring up any possible mitigation strategies, regardless of viability.

“Really beginning to take some of the brainstorming and discussions that we've had and move that forward to identify area by area, what potential projects are there? What information do we need? We're not going to get into feasibility,” Andreani said. “And I think we finally gotten the ear of a number of the federal agencies. FEMA will be participating in this meeting as well, hopefully Natural Resources Conservation Service, the Army Corps of Engineers, and others.”

The summit will be held next week and will be followed by a virtual report back to the public to discuss conclusions from the summit on Aug. 27. That public meeting will be held via Zoom.

But Andreani warned that, with a limited area between the burn scar on the mountains above and the city, the issue is a difficult one to address.

“As we've said all along, there is no silver bullet. There is no one quick fix,” Andreani said. “This will begin a process of hopefully working with [federal partners] to secure resources and funding for some longer term mitigation.”

The move comes after an estimated 300-year storm event -- one that happens statistically just once every 300 years -- dumped rain onto the Museum Fire burn scar Tuesday, closing roads, overwhelming drainage systems and flooding some homes as well as Killip Elementary School.

The same afternoon, a 400-year storm event caused additional flooding through the Rio de Flag watershed, destroying at least one home and damaging the interiors of others.

And even before flooding occurred Tuesday, communities along Lake Mary Road saw damage from a hail storm that peppered the area with balls of ice that were 1 to 2 inches in diameter.

That storm damaged as many as 80 structures, according to the county.

But given the level of storms that occurred, and the huge amount of water that made its way through the city, Andreani said the flood mitigation infrastructure stood up fairly well.

“I will say overall that the mitigation in the flood area, given the level of event we had, it held up remarkably well,” Andreani said.

During a meeting with the Board of Supervisors on Wednesday, Coconino County Emergency Management Director Wes Dison said they are also in talks with the state to see if an emergency declaration can be made by the governor’s office in response to Tuesday's flooding, as well as a federal declaration of emergency on flooding that occurred last month.

Coconino County declared an emergency last month due to flooding, but that declaration is still applicable to this most recent flooding, Dison said.

Those new declarations from the state would open up pots of money and reimbursement for city and county efforts to counter flooding, and potentially bring additional assistance from some agencies.

Those declarations are expected to come early next week, Dison said.

Dison said United Way of Northern Arizona is also working with the city and county to create a more sustained volunteer effort to assist those in impacted areas.

There is already a large volunteer event planned for Saturday to assist residents in cleaning up mud and debris left by the flooding, as well as potentially repairing sandbag walls.

But Dison said United Way is also hoping to start an effort that may have volunteers working throughout the week on a more regular basis, as opposed to mainly focusing on large, one-off events.

But beyond the flooding itself, during the same meeting Andreani said the recent events highlight the importance of additional forest treatment projects that need to occur around Flagstaff and across Coconino County.

The storm event that flooded the Rio dumped more than 2 to 3 inches over the area of Fort Valley.

But if that same area had seen a significant burn, Andreani said the flooding that storm created would have been far more devastating.

The city has been long been working with the Army Corps of Engineers on a flood control project to manage larger flows coming down the Rio de Flag. But Andreani said even once that project is complete, it would be unlikely to stand up to a post-fire flooding event.

“I want to plant the seed that this event shows us why we need to focus on forest restoration on the west side of the Peaks. It is just a time bomb, a ticking time bomb,” Andreani said. “If that burns and we have an event like we did [Tuesday] downtown, irrespective of the Army Corps project, it will be just a horrible event.”

At the moment, the forested slopes on Bill Williams Mountain, just south of Williams, are still the highest priority for forest restoration. Phase two of a forest restoration project in that area is starting later this month.

But Andreani said the flooding highlights that there is still a lot of forest that needs to be treated to help prevent catastrophic wildfire and post-fire floods.

Some of those areas include areas above Oak Creek and additional acres near Mormon Mountain, Andreani said.

“We can’t stop investing in forest restoration or we're never going to get in front of this,” Andreani said.

No quarantine required in Sydney for vaccinated international travelers

No quarantine required in Sydney for vaccinated international travelers

In an effort to help the cleanup effort at Killip Elementary School, after Tuesday's flooding that forced its evacuation, Fratelli Pizza will …

Killip Elementary School has canceled classes for the rest of the week due to damage from flooding Tuesday afternoon.

As flooding dragged traffic to a halt across the city and forced classrooms to evacuate at Killip Elementary School on Tuesday, JoAnna Ignace,…

Jazmine Gonzalez, 8, uses a stick to clear debris from a drain Tuesday afternoon as she and her cousin Terence Bahe, 16, worked to clear a sidewalk on Sixth Ave.

A cyclist makes his way through flood waters on his bike Monday afternoon as traffic in Flagstaff’s Southside was rerouted around flooded streets following the Rio de Flag bursting its banks.