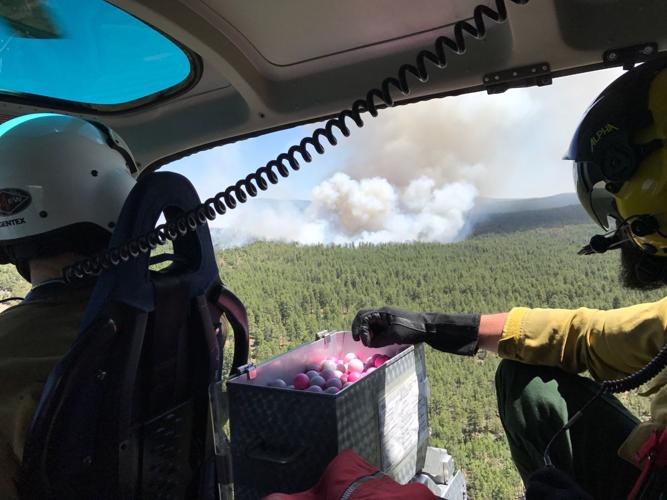 A Helitack crew conducts air ignition operations on the Snake Ridge Fire northwest of Clints Well on the Coconino National Forest. The lightning caused wildfire was reported May 19 and has burned about 8,200 acres. 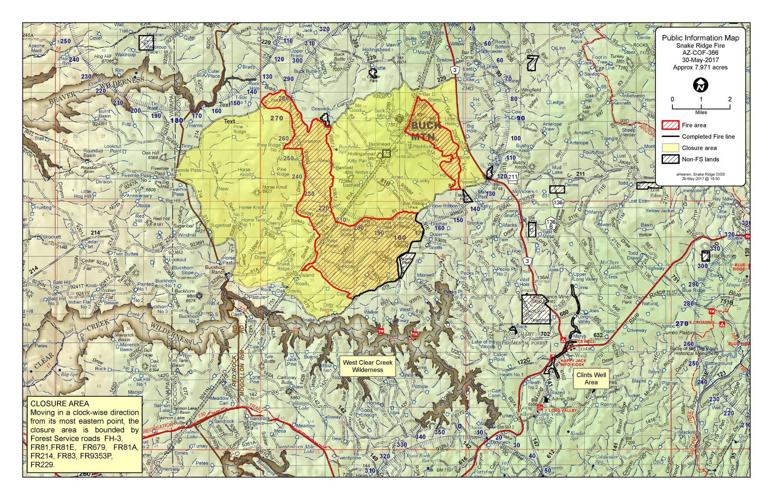 Map of the Snake Ridge Fire

A lightning-caused wildfire that Forest Service crews are allowing to burn across an area near Clints Well in far southeastern Coconino County is expected to grow from a current size of 8,200 acres to about 12,000 acres before it will be contained, said Kaitlyn Webb, the public information officer on the Snake Ridge Fire.

Along with natural growth, fire managers are nudging along the fire's progression with aerial ignition tactics that use helicopters to launch what look like combustible ping pong balls onto the burn area.

The agency is managing the fire, which has burned at low to moderate severity, to benefit the forest in ways that include reducing the buildup of trees and other fuels and replenishing nutrients in the soil, Webb said. Crews expect the fire will have “run its course” by early next week, she said.

The fire was reported on May 19 about nine miles northwest of Clints Well and is now 15 percent contained. So far, it has cost the Forest Service $450,000, which breaks down to about $56 an acre — below the $70 per acre that Coconino National Forest officials said was the average for managed fires two years ago.

On Tuesday, fire crews had help from a Helitack crew down from Grand Canyon that completed aerial ignitions by flying over a predetermined area of the fire and releasing golf ball-sized spheres with ignitable material inside of them, Webb said. The spheres are punctured before they are shot out of the helicopter. Once they hit the ground, they burn in a small circle outward, eventually merging into each other, she said.

The aerial tactic is good for steep or rough terrain that is difficult for on-the-ground crews to access and also quickly covers a lot of ground, which speeds up the fire’s progression and shortens the duration of smoke impacts, she said.

The fire is burning about 12 miles from the edge of the Tonto National Forest, which has implemented Stage 1 fire restrictions. But that proximity hasn’t specifically impacted how the Snake Ridge Fire is being managed, though fire managers constantly evaluate current fuel and fire conditions, Webb said.

“Down there they have different fuel moistures and the vegetation is at a different level when it comes to how dry they are,” she said.

While there are about 100 personnel assigned to the Snake Ridge Fire, Webb said there are “a lot” of other firefighting resources available, in case another wildfire pops up in the area.

Over Memorial Day weekend, the Forest Service increased the number of patrols in the area of the fire who monitored smoke and made sure the public knew what was happening with the blaze. Smoke from the fire was visible to many recreationists in the forests south of Flagstaff over the weekend and continues to affect the Camp Verde, Sedona and Oak Creek Canyon areas.

If crews need to immediately suppress the fire, Webb said the incident team has already identified features like roads and previously burned areas that could be used to help contain the fire and made sure it has a variety of firefighting resources ready to be deployed.

Attempted home invasions and intrusions around Flagstaff have residents concerned

Flagstaff residents are unsettled by attempted break-ins and suspicious activity in their neighborhoods.

Found: Search is called off for missing Flagstaff couple, located unharmed in Utah

A Flagstaff couple, missing since August 12, are located unharmed in Utah during a traffic stop.

Tad Moore has been a realtor in northern Arizona for the past 16 years and has lived in the city his whole life. The market is “volatile,” he …

Monica and her husband moved to Flagstaff this spring, and though they had planned to live here for the long term, they are already planning a…

Housing in Flagstaff: Short-term rentals putting the clamps on some would-be buyers

Julia Wright and her family recently purchased a house in Flagstaff after nearly a year of searching.

The opening of a new multi-use trail near Flagstaff marks a new wave of progress in the Mount Elden/Dry Lake Hills (MEDL) trail project, a Coc…

Blue Montana and his family just moved into their first apartment in Flagstaff at the beginning of June after arriving in the city in August of 2021.

A Saturday morning crash meant one lane was closed on Lake Mary Road for more than 4 hours. Here's what CCSO said happened, and what they're investigating now.

In a recent closed-door meeting of the Payson Tea Party, Arizona State Sen. Wendy Rogers encouraged her supporters to attempt disruption of ma…

Housing Solutions of Northern Arizona CEO Devonna McLaughlin said it has been harder to find housing in Flagstaff lately -- even more than usual.

NASA successfully crashes a spacecraft into an asteroid

A Helitack crew conducts air ignition operations on the Snake Ridge Fire northwest of Clints Well on the Coconino National Forest. The lightning caused wildfire was reported May 19 and has burned about 8,200 acres.

Map of the Snake Ridge Fire