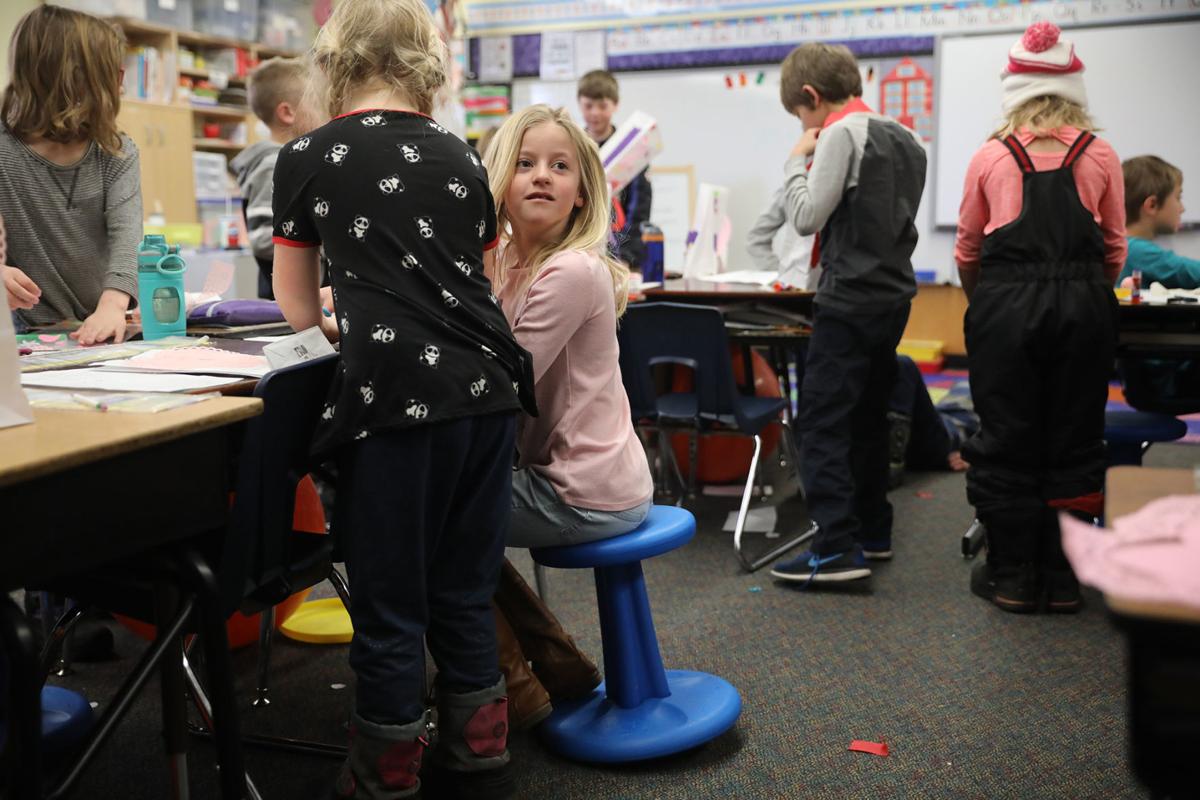 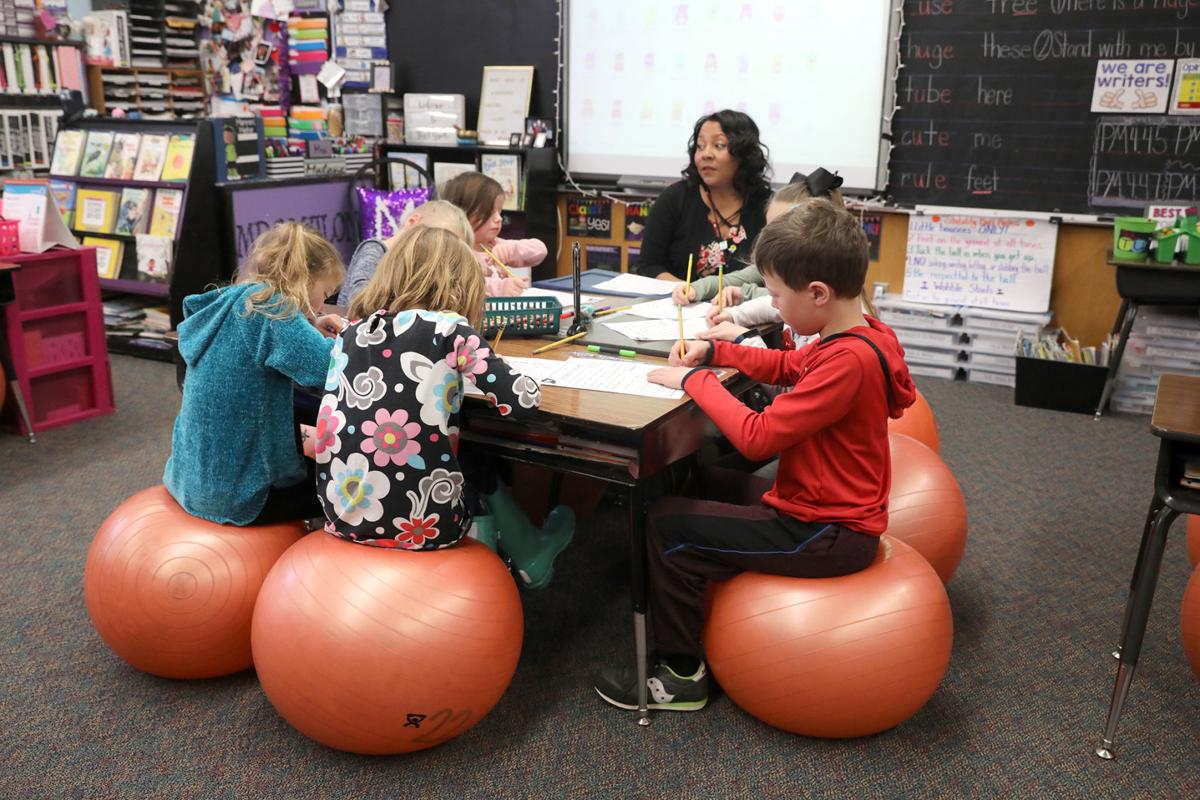 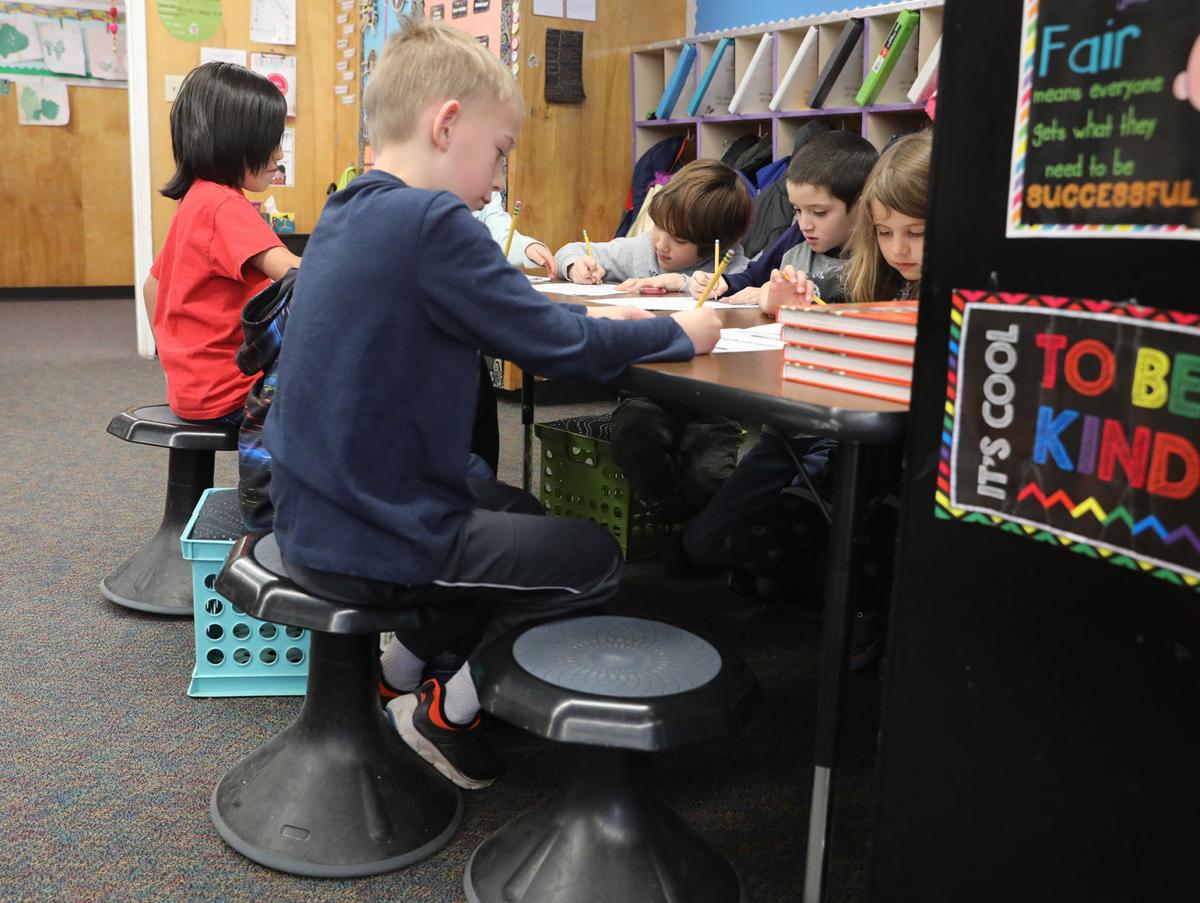 Sechrist Elementary now offers flexible seating in all its classrooms. But that doesn’t mean students are learning to touch their toes. It means young learners can now choose how – and where – they learn best.

Throughout the school, the options are overwhelming: recently installed KORE chairs as well as stability balls, wobble stools, cushion seats, scoop seats and alternative office furniture exist in various different sizes and colors to serve students and teachers of all types.

The amount, type and uses of these seats vary by class. Some teachers have a full class set, while others have only a handful of seats that they distribute among existing classroom chairs or assign to activity centers within the room.

“The thing I love is that, because it’s flexible seating, there’s a lot of different kinds," kindergarten teacher Stefani Whitcomb said. "It’s not just all wobble seats, all balls or all chairs. The flexible part comes in that a student gets to choose.”

Like other flexible seating, KORE chairs, a type of wobble stool with a rounded bottom, exercise students’ bodies while increasing their focus by serving as an outlet for restlessness.

These wobble stools, which are designed not to tip over, are second only to the stability balls that have had a regular presence in Sechrist classrooms for years.

“They help you focus and wake up in the morning, sometimes. When you’re tired, if you bounce, they help you wake up,” said fourth-grader Aubrey Hulls, 10, of the balls.

“I was noticing how often students tipped over or leaned in regular chairs and were laying on desks,” she said. “So I would take a little tally mark and it was daunting to see how often kids fell out or were laying down on the desks, so I started research on stability balls.”

Using DonorsChoose.org, a nonprofit allowing the public to donate to public school classrooms, Malone raised funds for stability balls for her own classroom. About three years later, she was able to purchase three stability balls for every other Sechrist classroom using a grant from Running Strong for American Indian Youth, a nonprofit co-founded by 1964 Olympic gold medalist Billy Mills.

“Students are using core muscles that they may not have used before, they’re sitting up straighter, their handwriting has gotten better, and they can move and wobble as they need,” Malone said.

She said the various actions of students using alternative seats has never been a distraction because they only move when they need to, not constantly.

Traditional classroom chairs remain an option, too, which students often choose if they become too distracted by the stability balls or wobble stools, or if they violate the rules.

Each classroom has a similar set of rules for these unconventional seats. For the wobble stools, both feet must be on the ground at all times. Stability balls are more difficult to control and thus require extra rules: Students must keep their feet on the ground at all times, only do little bounces, tuck the balls under their desk or table when they stand up, and respect the balls by not poking, writing, hitting or stabbing them.

Fourth-grade teacher Jamie Mimran said she has her students and their parents sign a contract at the beginning of the year for use of the full set of 30 stability balls in her classroom. Her students then get to choose a ball that will be assigned to them for the year. Her new KORE chairs are being used in a classroom work station.

“For at least the fourth-graders, in my experience, I think they like the mobility. They know their boundaries. They know it’s not a toy, it’s an actual seating position where they get to balance and move,” Mimran said.

Though even adults struggle at times with controlling stability balls, teachers noted that students are less likely to be hurt with these new round-bottomed seating options than when using traditional classroom chairs.

“We’ve had more kids fall off the chairs than anything else because when they lean back in the chairs, they don’t have an ability to balance themselves, so they just fall back. When you’re on the balls or the stools, you’re going to catch yourself. It makes them have to focus,” said Dina Bangle, second grade teacher.

Bangle spearheaded the efforts for the KORE chairs after seeing the benefits of flexible seating in her classroom. In January, she approached the Sechrist Parent Teacher Organization about using some of the funds from the school’s annual Trojan Trot sponsor-by-mile fundraiser to purchase these wobble chairs for teachers who wanted them.

As she found out, they all did.

Teachers of every grade level and program, including those in Behavioral Support and Counseling, requested the chairs for their students and were in a frenzy earlier this week as they flocked to assemble and claim their share of hundreds of KORE chairs when the shipment arrived at the school, Bangle said.

The teachers agreed that there is no obvious disadvantage of offering flexible seating to their students, except the price. KORE chairs, when purchased in bulk, cost about $50 each.

The benefits have been so significant, regardless of price, teachers are doing all they can to introduce new seating options in their classroom, including paying out of pocket and collecting donations for materials to craft their own.

Alternative seating is one component in a slow but ongoing process to improve local learning environments in a way that not only benefits each unique learner but also is enjoyable for students.

“They’re actually a tool to help kids learn, but they all want it. And that’s what’s really cool about it,” Bangle said.

"Only One You:" Thomas Elementary students create art based on local children's book

In 2006, Linda Kranz, a local children’s book author and illustrator, released her book "Only One You"; in September of this year, students at…