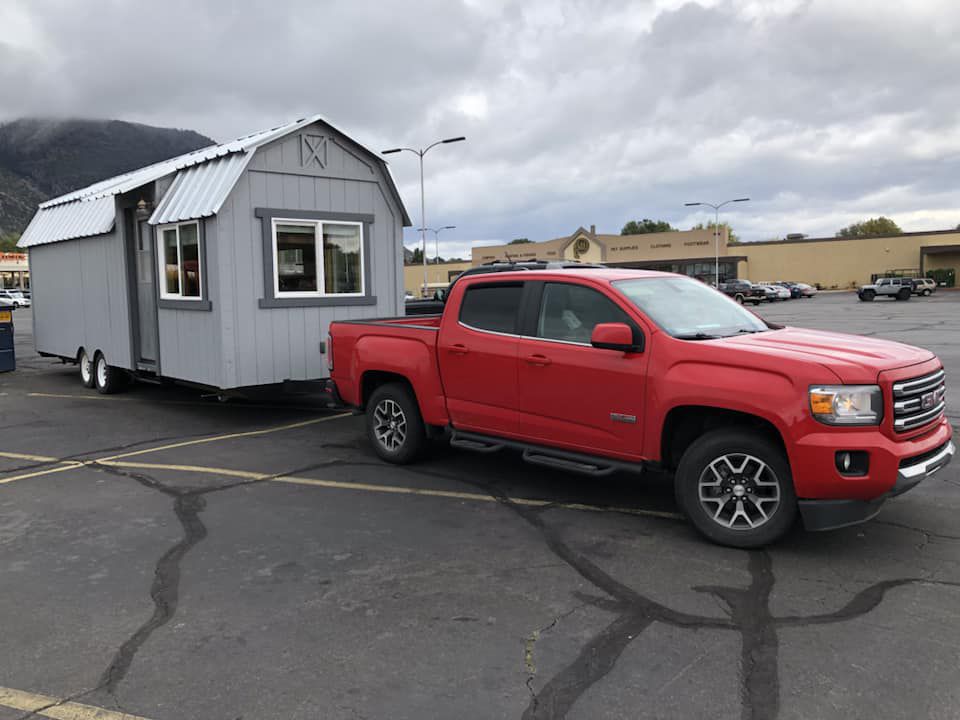 Helen Cody and Jefferson Clauschee use their truck to tow away the tiny home they won in a raffle. 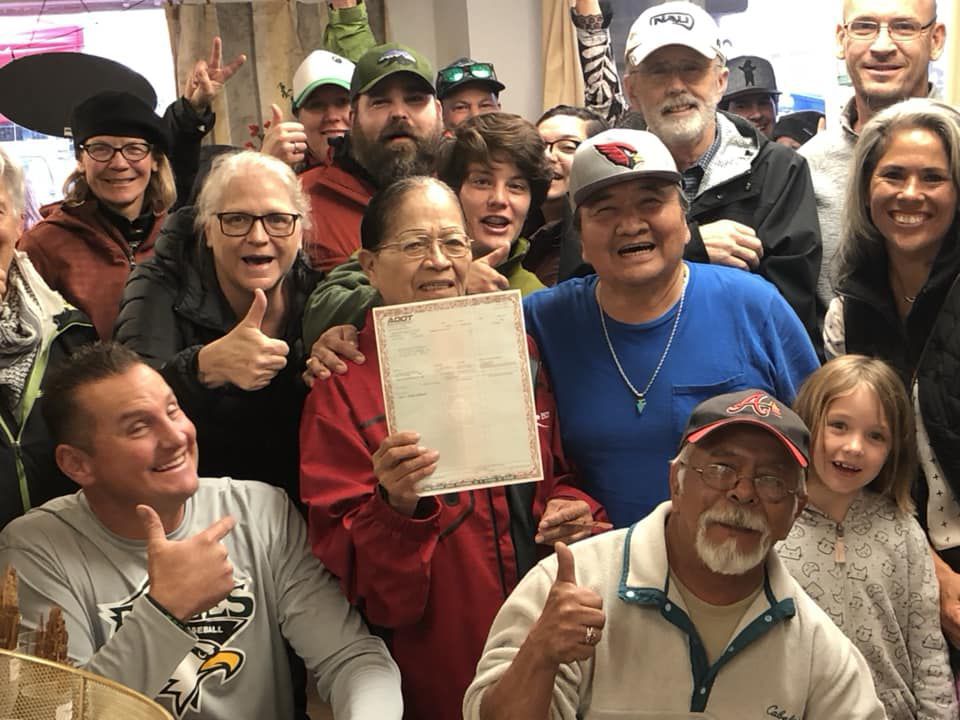 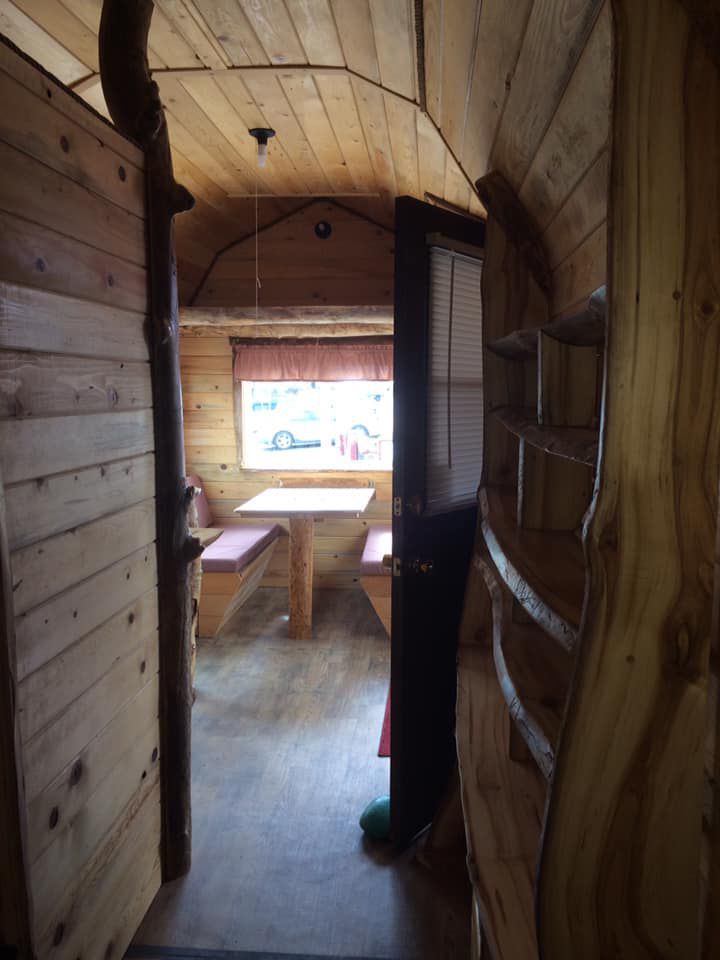 View of the hallway leading to the living space in the Market of Dreams tiny home. 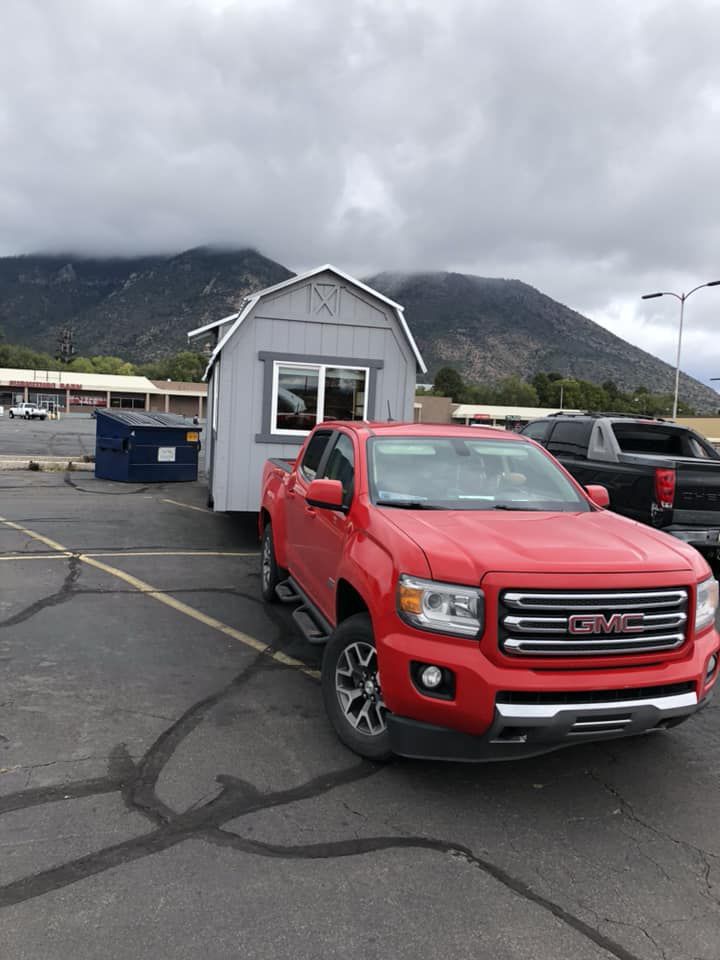 Helen Cody and Jefferson Claucshee tow away the tiny home they won with their truck.

Jefferson Clauschee could have sworn he locked the doors of his red truck that day in mid-April. But sure enough, he found letters, bills and tools missing out of the truck’s glove compartment. Also missing was his wife’s $100 ticket that she had recently bought for the tiny home raffle at the Market of Dreams.

Helen Cody had decided to purchase a raffle ticket after she and Clauschee spotted the tiny home while on one of their trips to Cal Ranch. Every once in a while the couple makes a two-and-a-half-hour drive from where they live on the Navajo Reservation in Kayenta to go shopping in Flagstaff.

The Market of Dreams, or Mercado de los Sueños, shares a parking lot with Cal Ranch. They were displaying the home on wheels in the parking lot to get people interested in buying raffle tickets as part of a giant fundraiser for the nonprofit community market.

When Clauschee and Cody saw the tiny home’s blue paneled exterior and then toured the interior, they fell in love with the intricate wooden features. Clauschee said they were really into the home’s structure, color, and the fact that it was portable.

Clauschee was shocked to find out that it was the first tiny home built by the Doney Park contractor. The contractor, who is friends with the Market of Dreams owner, donated the house to help with fundraising.

“The tiny house just kind of fell into our lap,” Market of Dreams Manager Dennis Chavez said of the donation.

The Market of Dreams’ tiny home drawing was originally supposed to be held March 17 on St. Patrick’s Day, but the goal of selling 250 tickets and raising $25,000 in funds was not met, and the drawing date was extended to June. When the goal was still not met by then, a drawing date was set for October, and Chavez decided not to delay the raffle any longer.

By October, the Market of Dreams had sold 114 tickets, making $11,400 in profits that will go to continuing the market's entrepreneurship programs, technology for its community computer lab and other supplies. A portion of the funds earned from the Sunnyside Neighborhood Association program will also go to Radio Sunnyside, a volunteer-run radio station located within the market.

Clauschee never heard back from the police department when he reported the ticket and personal items that were stolen out of the truck. But a week later a friend of the couple came to them with a muddy plastic bag. In it were letters and bills addressed to the couple that their friend had found discarded and scattered across an apartment complex floor. She recognized the names on the documents, rounded them up and gave them back to Clauschee and Cody. However, the ticket was not included in the pile.

On Oct. 5, the day before the drawing, Cody and Clauschee drove to the Market of Dreams and told Chavez the story about her stolen ticket. Chavez gave Cody a replacement ticket, and she wrote her name on it before dropping it inside an old drum of Chavez's which held the 113 other tickets.

Out of the 114 tickets purchased, Chavez said it was “unbelievable how many people of different social statuses” purchased one. Some people bought tickets hoping that they would win a home for their children; some bought tickets hoping that they would find a way to live cheaply in Flagstaff. One woman even spent $600 on six tickets in the hopes she could retire in the tiny home.

But if their ticket was pulled for the tiny home, local winners would have faced a dilemma.

“There is not a tiny home community in Flagstaff,” Chavez said. “The tiny home was really set up for a mobile or trailer park.”

The winners would have had 72 hours to tow the home to its new spot, not leaving a whole lot of time to find housing options in town.

For people living on the reservation, however, more land was available. “There are not a lot of restrictions out there regarding tiny homes,” Chavez said, adding that for this reason, many of the people who bought raffle tickets came from the reservation.

The day of the drawing was a rainy and windy Saturday. But Clauschee didn’t see the weather as dreary. “We were blessed with wind,” he said. In Navajo culture, this means a new beginning and good luck to come.

For the couple, it was good luck indeed.

When Cody’s name was drawn from the drum by SNA board member Daniel Williamson and read aloud to the packed market, it took Cody a second to register that she had won.

“She didn’t believe her name was called,” Clauschee said. “She had to hear it twice. I told her ‘that’s you, you won!’”

Cody then made her way through the cheering crowd, passing Mayor Coral Evans to receive the keys and the title. Since the tiny house is on wheels, it is technically a vehicle, and a title was transferred in Cody’s name just like a car would be.

Despite the fact that “the home was bigger than the truck,” Clauschee said there were no problems when they towed it back to Kayenta two days later.

Right now, the tiny home is in the couple’s yard. Clauschee, who teaches Diné to kindergarten through eighth grade at Kayenta Boarding School, said the couple sometimes goes in it "just to sit and look." They have received many compliments from the neighbors, with others asking if they could buy or rent the tiny home from them. But Clauschee and Cody have bigger plans.

They are waiting to get clearance from electric and water companies to put the home on Cody’s mother’s land near Black Mesa. Cody and Clauschee will use it as a country home and help with the livestock there. But Cody and Clauschee are most excited to be closer to relatives, including their eight children and 20 grandchildren.

Economic development, Northern Arizona University and the city’s noise ordinance were all subjects of discussion as this year’s candidates for…

With costs of owning and renting property in Flagstaff at sky-high rates, more and more residents are turning to four-wheeled living.

In August, 16-year-old Amari Jones approached a former teacher with a request. Amari, who lives 200 miles northeast of Flagstaff on the Navajo…

Northern Arizona University senior Baylie Heaps was walking to her car after class like any average day. It was Dec. 3, 2018. She was graduati…

For the first time, Flagstaff residents may have a legal way to live in a tiny house -- that is, after the completion of a new tiny house vill…

Helen Cody and Jefferson Clauschee use their truck to tow away the tiny home they won in a raffle. 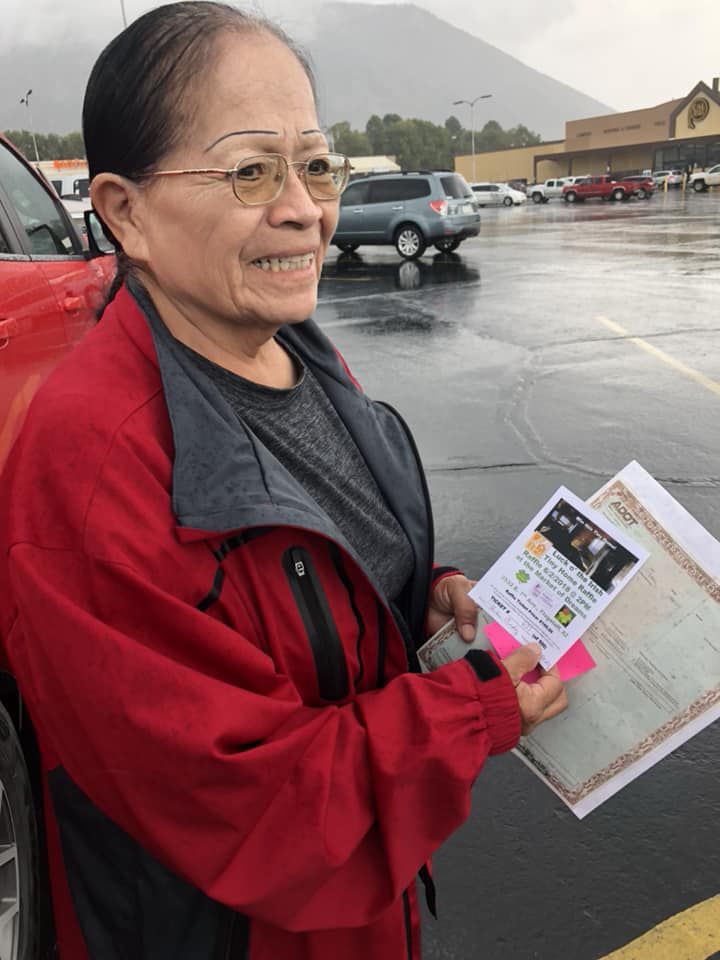 Helen Cody holds her winning ticket after receiving the title for her new tiny home. 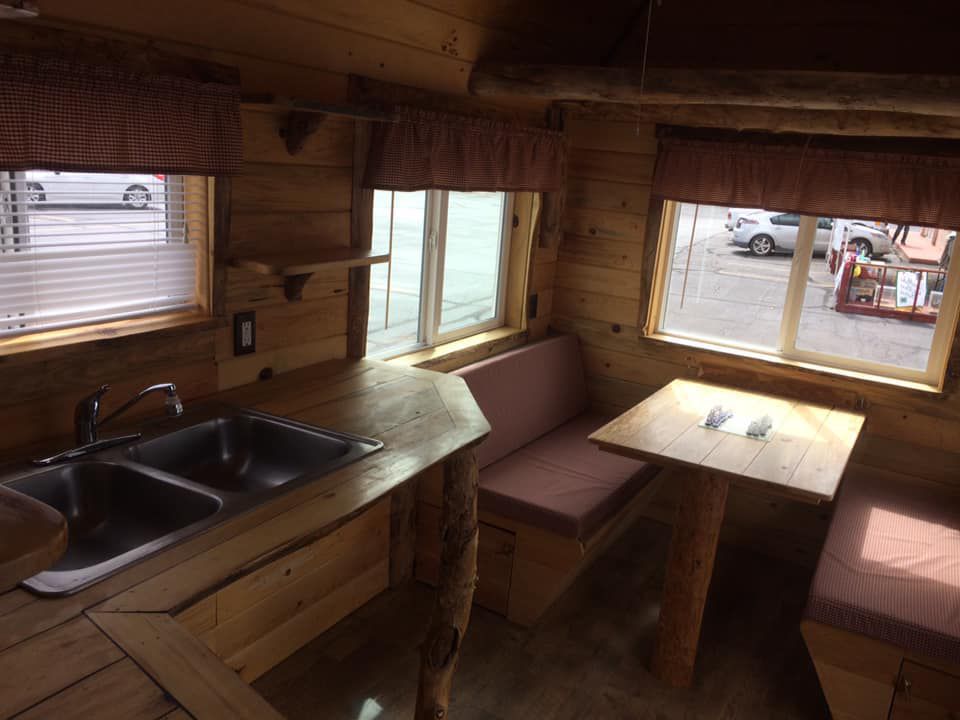 Kitchen in the Market of Dreams tiny home. 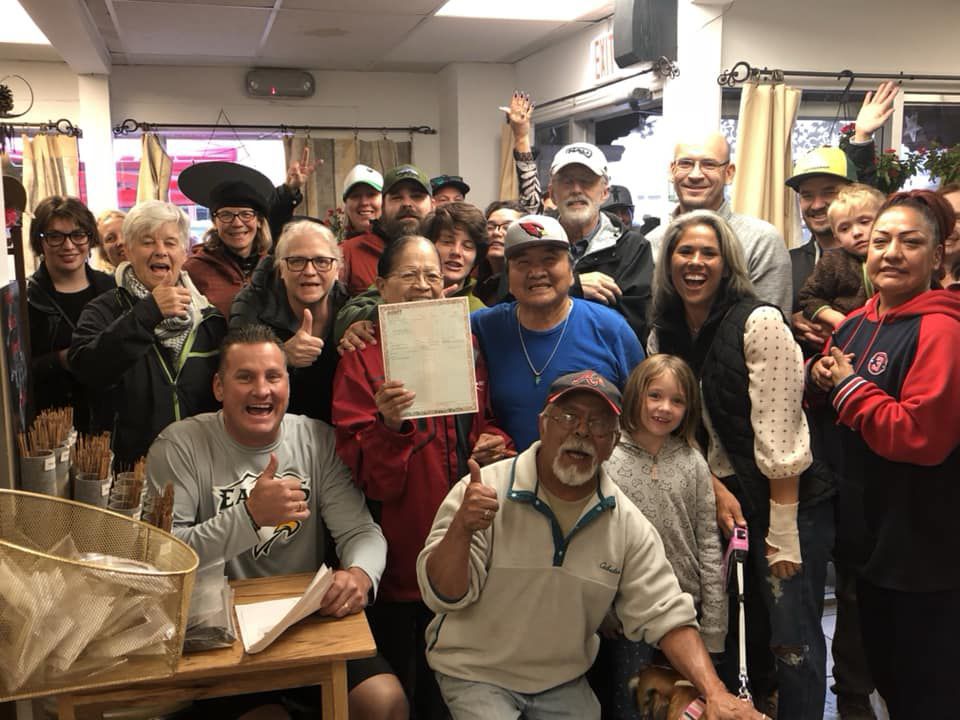 View of the hallway leading to the living space in the Market of Dreams tiny home.

Helen Cody and Jefferson Claucshee tow away the tiny home they won with their truck.