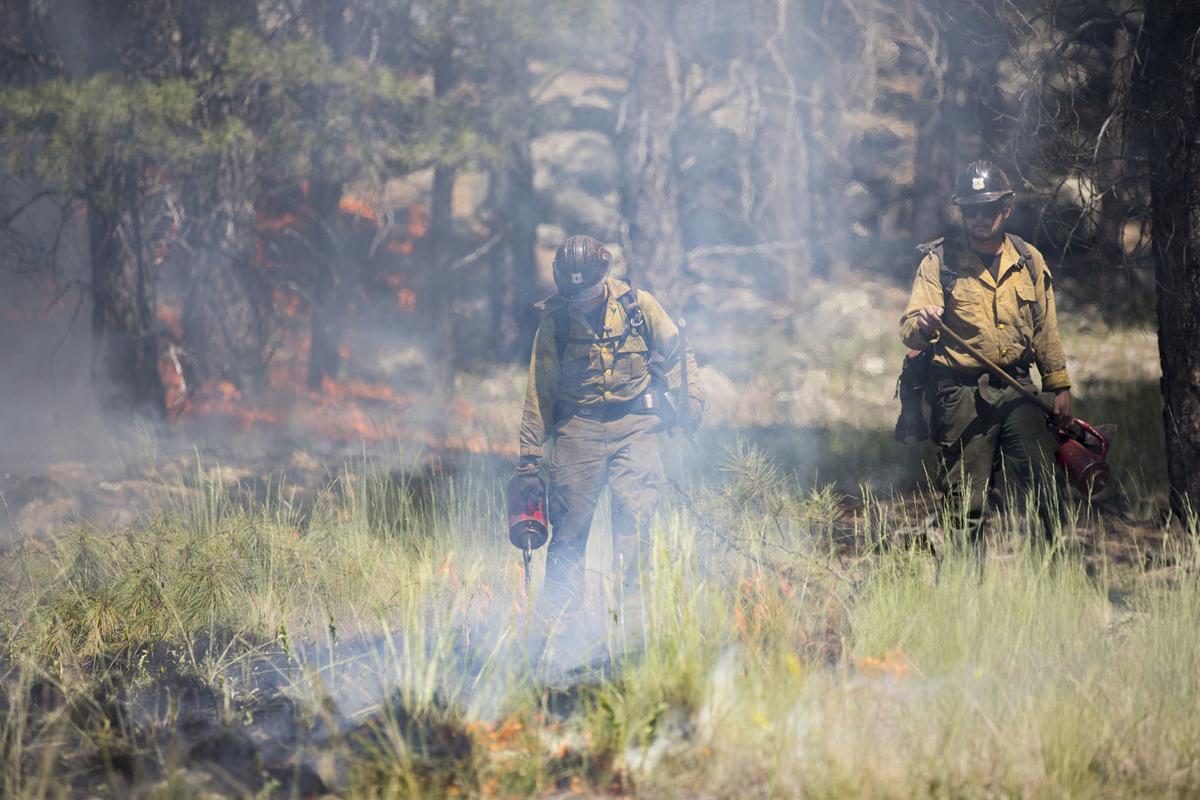 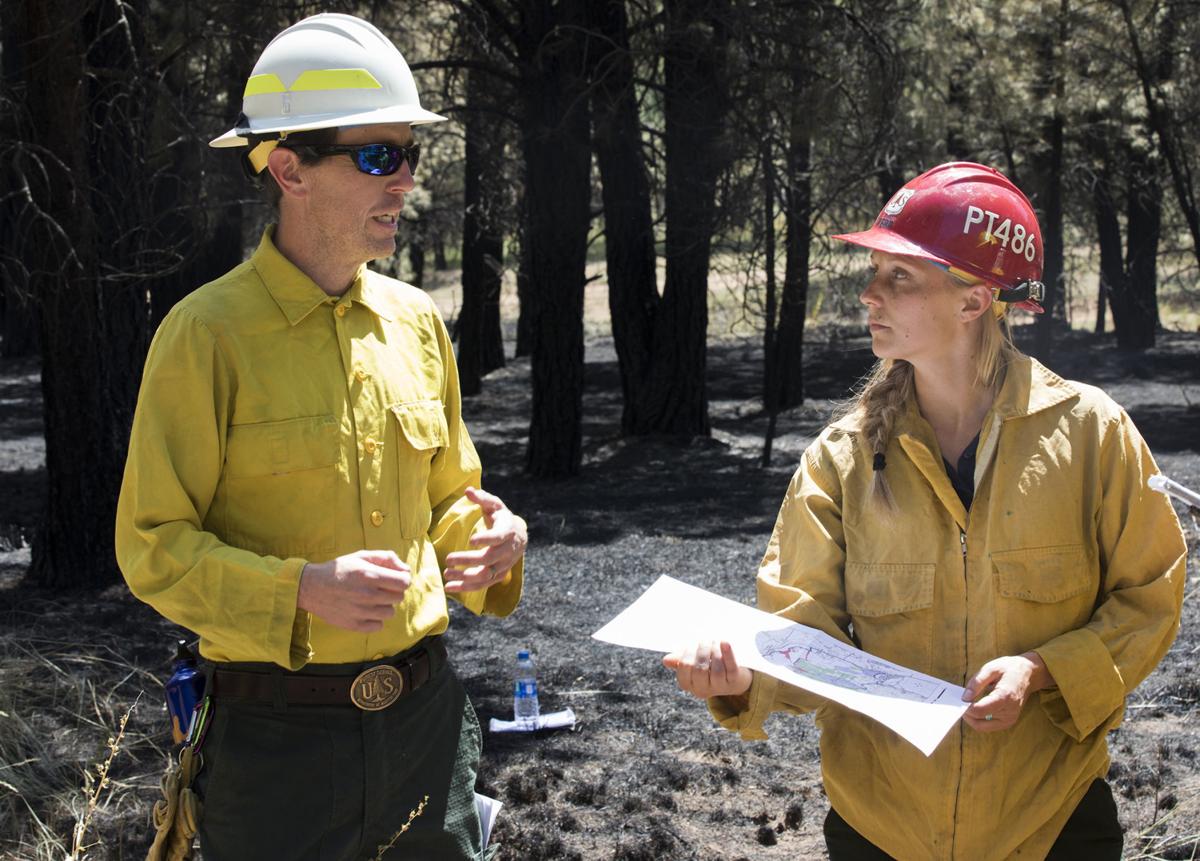 Matt McGrath (left), the district ranger for the Flagstaff Ranger District looks over a map of the Newman Fire alongside Kait Webb the public information officer for the Newman Fire Wednesday afternoon near Upper Lake Mary. 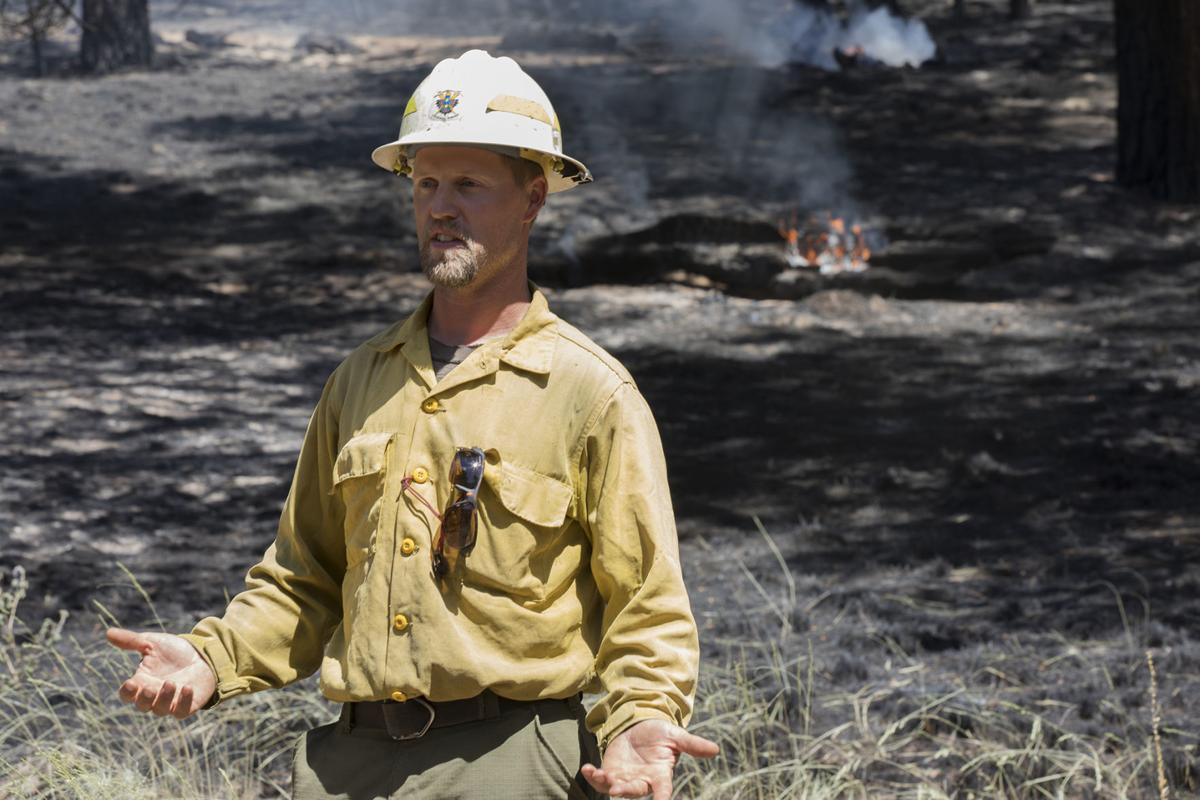 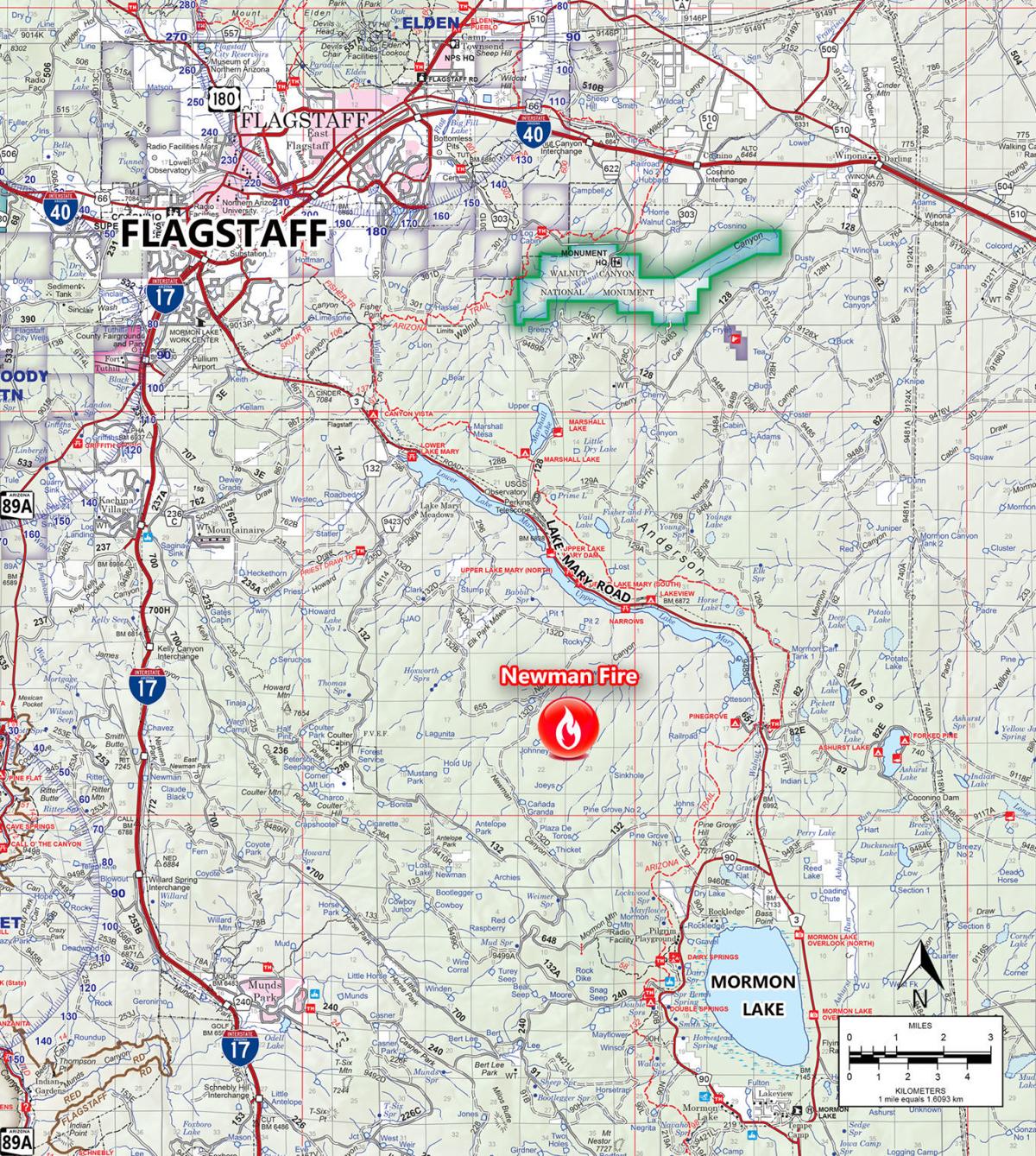 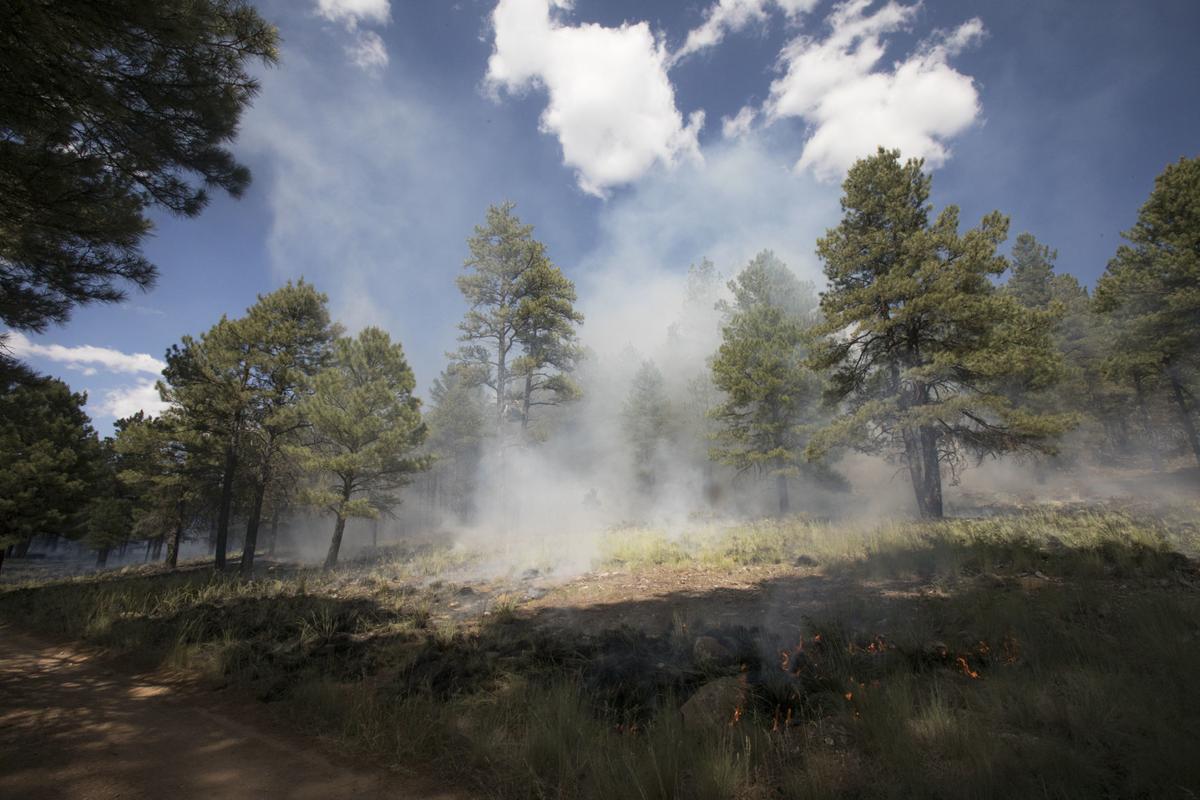 Smoke emanating from the Newman Fire near Upper Lake Mary rises through the trees Wednesday afternoon.

When the call went out through the U.S. Forest Service channels that lightning had struck a single ponderosa pine tree near Upper Lake Mary in the early morning hours of July 11, Nick Castro, Fuels Battalion Chief from the Coconino National Forest, was one of the first at the scene.

Castro's job that morning was to suppress the fire as needed, but also to make an on-the-ground risk assessment for the fire’s potential. He spent time looking over and figuring out preliminary information such as where the burn is, whether the fire is burning near any structures or campsites and if it could endanger animals or forest thinning plots.

As Castro assessed the fire, it was decided the then-wildfire could be managed by fire professionals to meet multiple forest goals. Now known as the Newman Fire, it has been allowed to burn more than 888 acres near Flagstaff’s Upper Lake Mary as of Wednesday. Its planning area is currently more than 22,000 acres 10 miles south of Flagstaff and 2 miles west of Lake Mary.

Smoke can be seen in areas like highways, Kachina Village, Munds Park, and Flagstaff. The Narrows day-use area and Lakeview Campground have been closed in addition to areas around the burn area. Forest officials are considering using helicopters to burn out some areas deep in the planning area if weather allows.

Smoke emanating from the Newman Fire near Upper Lake Mary rises through the trees Wednesday afternoon.

Low intensity wildfires are used to help protect Coconino’s ponderosa pine forests from more severe damage by clearing dried shrubs, pine needles and grasses on the forest floor, ensuring that too much fuel does not accumulate and allow fires to reach the canopy of the trees. The fire can also help fertilize soils to help fresher grasses and shrubs grow from the soil after the fire has passed.

Forest fire officials stay vigilant during managed wildfires, watching the fires during these managed burns to ensure it does not allow the fire to burn through the world’s largest ponderosa pine forest unchecked, and possibly damage critical resources. The Newman Fire currently has 122 personnel working on the scene.

Making the decision of whether to manage a wildfire or suppress a wildfire goes beyond Castro’s job description, he said.

Looking Over The Map

Matt McGrath (left), the district ranger for the Flagstaff Ranger District looks over a map of the Newman Fire alongside Kait Webb the public …

Matt McGrath, Flagstaff District Ranger, said the very next day, miles away from the fire, there were 15 people in a conference room getting further details on the Newman Fire planning area to determine if this fire could be managed to safely burn through the forest. He said the meetings took place over several days and included biologists, archeologists, range specialists who are making calls to verify their understanding of the area in preparation for a decision.

Fire historically moved through the ponderosa pine forest in three to five year intervals before the forest service responded by suppressing all fires, but the specific acreage in Upper Lake Mary hadn’t seen fire since before 2011.

First, the weather needed to be right to allow the fire to burn at a good pace, but not get too hot. The forecast had said there was a chance of rain around July 11, but it ended up staying dry. When the fire kept burning, one of their conditions for a managed fire had been met.

Those trees had been purchased for forest thinning and removal, so if forest officials allowed the trees to burn, they would be contractually liable for the lost wood.

However, the initial suppression ensured that no fire would spark in a timber sale, so a second condition had been met.

The region where the Newman Fire was burning was known to allow grazing rights to 550 cattle in the area, McGarth said.

“550 cows don’t just turn on a dime,” McGrath said. If the cattle were near the fire and in danger, the fire would have needed to be suppressed.

In their meetings, they put out a call to confirm where the cattle were last spotted. When the cows were confirmed to have been grazing away from the burn area, they checked off that condition.

After assessing the concerns for public and firefighter safety, they also assessed the impact on wildlife. Castro said they worked to identify the locations of the Mexican spotted owls, bald eagles, osprey and northern goshawk that migrate, live and feed around Lake Mary to ensure they were not in their breeding seasons and could be protected.

Forest officials believed they had the personnel and tools to make that happen.

After clearing through the different hurdles, they made the decision that the wildfire could be managed at a low intensity.

Gabe Hale, crew boss with the Wildland Fire Module Unit, explained that the fire has been going smoothly during his crew’s work on the fire line. He compared the management tactics as very similar to those used for a prescribed fire, but said the Newman Fire continues to be classified as a wildfire.

“This pine type is very fire adapted, and getting that fire back into the ecosystem is just going to benefit the existing stand, increase the health in the forest,” Hale said. “It’s a great place to reintroduce fire.”

Officials with the Coconino National Forest are continuing to manage a fire started by a lightning strike and discovered late last week, accor…

The truth is that when there are no fires, they will either create one (prescribed burn) or let a natural one burn to get the fire pay. The USFS management has been noted to state that they don't want to loose the fiscal year funding, therefore they will spin it so it looks like they are interested in so called clearing the fuels to prevent future fires. It's all about the money for them. They will fight every time to let a contractor clear the forest which is more cost effective and does not create the pollution.

What wildfire? If the benefits are so clear, why does the forest service have to wait for a lightning strike? Answer: there's virtually unlimited federal money for "fighting a wildfire". But they aren't fighting it, they're lighting it! This article needed a lot more candor. Next time talk about the "fire dropping drones" they use for widespread ignitions...and the so-called "planning area" is the acreage they'd like to burn. Not arguing the need to do the burns, rather the timing and the media coverage (this article didn’t quite get to the truth.) The problem with this method is the FS doesn't get to choose the optimum place and time so they can manage smoke impacts. And the media continues to worship the so-called fire “fighters”. This is hardly the way for an “advanced society” to behave.

I wish they would take into consideration the fact that most people in Flagstaff do not have air conditioning. We rely on the cool evenings to lower the temps in our houses. When the smoke rolls into town you cannot open your windows. I'd like to send the bills for all the hotel rooms we've had to rent due to their "managed" fires during the hot months of the year.

Hmmmm, while our "modern" world is based on money, using the sources of it advantageously to accomplish good things is not a fault. Having worked with Forest Service personnel doing trail maintenance I know many or most truly care about the forest and those who enjoy/use/profit from it, and will take advantage of resources to further those goals.

Arizona was once known as a health mecca, and the air is our greatest natural resource. That is being ruined by these massive, intentionally grown burns.

The number of large air tankers on USFS contracts ha fallen from 24 to 21, the lowest in decades. If you were having an epidemic of house fires and you lowered the number of engines available to you, would that look like you actually wanted to put these fires out?

What the USFS fails to mention is that managed wildfires are not regulated by ADEQ. The USFS can legally expand just one burning snag into 10's of thousands of acres without any restrictions for air quality to downwind populations. Prescribed burns are permitted by a small group of meteorologist at ADEQ who attempt to determine if the conditions will likely allow the smoke to rise and move away from communities next to the fire. Unfortunately, the communities further downwind and often at lower elevation are vulnerable to inversions and air stagnation. So, when you gasp a sigh of relief that the smoke is not blowing your way, think of where the smoke is going to those citizens that will suffer this time. The only way to stop this deadly practice which shortens the lives of people with heart, lung, stroke, diabetes, cancer and autoimmune diseases is to put pressure on the FS and ultimately, our Federal elected officials.

When the FS says that fire is natures's way of thinning the forests, remember that cholera is nature's way of thinning human populations. There are other effective, constructive and air quality saving strategies that the FS could select, but rejects. One is to change our out dated log export laws that would allow us to have a market for the small diameter, low market value trees that are choking our forests and fueling massive wildfires See Senator McSally's Farm Bill that introduces such a proposal. The orient needs wood fiber for strand board, cardboard, etc. Do we really need more burning with the Amazon on fire.