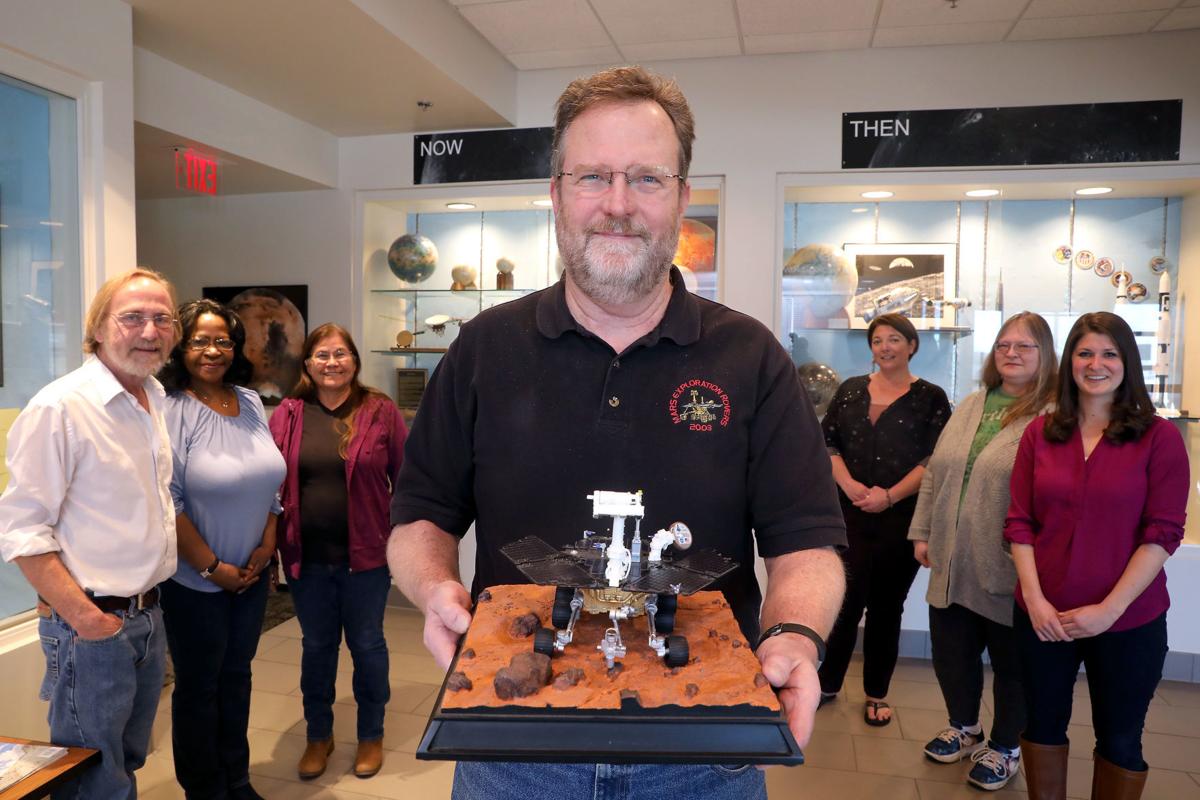 Ken Herkenhoff holds a scale model of the Mars Opportunity Rover as he is surrounded by fellow scientists who worked on the rover program. Pictured from left to right are Paul Geissler, Janet Richie, Ella Mae Lee, Annette Sunda, Bonnie Redding, and Lauren Edgar.

A photograph of Opportunity's landing site, named Eagle Crater, captured by the rover.

Or so it did nearly 16 years ago, when it sent not one, but two rovers to explore the red planet.

Fifteen years into a 90-day mission, Opportunity (“Oppy”) joined her twin, Spirit, in the unresponsive state after her solar panels were obscured by one of the most severe dust storms ever recorded on Mars. Similar to naval ships of exploration, both Spirit and Oppy were often referred to by team members as female characters.

Oppy was declared dead by NASA’s Jet Propulsion Laboratory (JPL) Feb. 13, ending the Mars Exploration Rovers (MER) mission that not only determined the historical presence of water on Mars, but also helped launch an era of continuous planetary exploration.

Oppy was not a distant machine, but rather considered a colleague of numerous local scientists.

Ken Herkenhoff with the U. S. Geological Survey (USGS) Astrogeology Science Center was the principal investigator for one of the cameras onboard the rovers. The end of the mission also served as the end of 20 years of hard work.

“It was a sad day. It wouldn’t be fair to my kids to say it was like losing a child, but I put so much time and effort into this spacecraft that it did feel like the loss of a family member when we didn’t hear from them again,” Herkenhoff said.

Research geologist Lauren Edgar, though she spent less time with the rover than Herkenhoff, said she was still closely connected with her.

Edgar started work with the MER rovers when she was a graduate student, and continued to do so for about 11 years though the USGS. She said, though team members knew Oppy would not recover after the storm, she still shed tears during the final meeting.

It seemed challenging not to be fond of the rover that lived up to her name.

When problems arose prior to the landing in 2004, Spirit was launched before her sister, contrary to the initial plan, Herkenhoff said, putting Oppy in a position for prime discoveries.

Cornell University’s Steve Squyres, MER’s Principal Investigator, famously called the landing an “interplanetary hole in one” because the rover landed in a small impact crater easy to maneuver out of and where she discovered hematite, a mineral typically formed in water.

Like Herkenhoff and Squyres, Alicia Vaughan was also involved in the mission at the beginning. She worked at JPL and the USGS for years before teaching the lessons she learned at BASIS Flagstaff, where she now serves as director of student affairs.

“We always said Opportunity was the lucky one, blessed from the beginning,” Vaughan said. “We could spend a whole day driving and travel a long way and we could never do that with Spirit because it was much more challenging terrain with boulders and hills to climb.”

The work of the two rovers together helped reveal the diverse terrain on the planet, said Jennifer Hanley, an astronomer at Lowell Observatory who researches the stability of water on Mars.

She said the twin rovers helped scientists differentiate areas on the surface of the planet as close, but as diverse as Flagstaff and Phoenix.

Flagstaff scientists had a continued presence in the daily operations of Oppy from the beginning, assisting with both downlink and uplink operations for the various tools carried by the rover. Some even lived on Mars time to do so.

For the first 90 days of the mission, the team worked out of JPL in Pasadena, California. Each day, conference rooms were packed with scientists and engineers eager to make the most of the rovers’ limited time.

Martian days are about 40 minutes longer than Earth days, so scientists working at JPL would have to continually adjust their shifts to match the different cycle, relying on blackout curtains to get sleep when it was light outside.

In a story about her time on the mission, Vaughan wrote she and her dog both struggled with Mars time.

“He did not understand why… I would come home and sleep all day while he barked at the world outside,” she wrote.

Herkenhoff said the team willingly fought against the nine-to-five schedules of Californians to get to and from the lab for each Martian day.

“A colleague and I figured we were working about 100 hours a week and just loving it. We were living on MER,” Herkenhoff said.

When the team realized the mission would be lasting longer than expected, they transitioned to remote work. Many downlink and uplink duties were performed from Flagstaff from that point forward.

Downlink included assessing all data collected by the rover the previous day, the rover’s health and ability to perform commands the next day.

Ryan Anderson, a physical scientist at the USGS, joined the mission in 2007 and helped with downlink by assembling and preparing photographs captured by the rover’s panoramic camera (“PanCam”) for analysis.

“It was so cool to know I was one of the first few people to see a picture from another planet,” Anderson said.

Uplink occurred when the team built a package of engineering and science commands for the rover to perform the following day, depending on how much dust was on the solar panel and, therefore, how much power was available.

By the end of the mission, the team had hundreds of prebuilt commands to choose from, including even those needed to free the rover from sand traps.

The commands were applicable to all of the rover’s tools and cameras like PanCam and the Microscopic Imager (MI), Herkenhoff’s specialty, which captured magnified photographs of rocks.

Each day, the team learned how to better angle the cameras and maneuver the rovers – backwards like a rolling suitcase was often preferred to reduce strain on the rovers. The team also marked milestones along the way, like the completion of the first marathon on Mars in 2015, and shared them with the public.

Though the MER mission ended, Spirit and Opportunity inspired a legacy of Mars research that will continue far into the future.

Edgar, Anderson and Hanley said they both were inspired to dive deeper into interplanetary science because of the rovers. Those who worked on the MER mission were also involved with the Curiosity rover launched in 2011 and Mars 2020, the next rover mission.

“Now, for the foreseeable future, we have rovers that are going to Mars and going to be active,” Anderson said. “That attitude is thanks to MER and the fact that Opportunity lived so long that we’re used to this continued presence on the surface.”

This presence allows researchers to gather information about both the long-term history and seasonal storms, information that will be essential to future missions.

"Understating these dust storms is important," Hanley said. "If we want to have human habitations and landings at some point in the future, we need that long record of ups and downs in seasonal dust storms.”

Unlike the newest rovers, which run on nuclear power that will eventually run out, if the solar panels of the MER rovers were to receive enough power, a revival – though unlikely – could be possible.

Janet Richie, a cartographic technician at the USGS, wrote in an email, "The inability to communicate with Opportunity due to Mars' extreme weather does not mean that human explorers will not someday resuscitate or retrofit one or all salvageable Martian rovers. The beauty of it could be the rovers' second life of exploration along with their human companions, and our good-byes may not be eternal."

NYC to pay unvaccinated $100 to get jab

NYC to pay unvaccinated $100 to get jab

NY to require state employees to get vaccines

NY to require state employees to get vaccines

There are New Year’s parties, and then there was the bash in Laurel, Maryland, that celebrated the exploration of the most distant celestial o…

The final part in a three-part series on NAU research.

A lunar eclipse hung above the starlit sky on Sunday night from 8:30 p.m. to midnight. Also known as the as the super blood wolf moon, this as…

New outer space object is far, far away from the sun

There’s a new distance champion in the cosmic race around the sun.

Nearly 100 of Flagstaff’s leaders in science, education and local government gathered Tuesday to share recent advancements in the biosciences …

Planetary mapping connects past and future

After months-long journeys through space, both the Hope Probe and Perseverance rover will be arriving at the Red Planet this month, marking mo…

Ken Herkenhoff holds a scale model of the Mars Opportunity Rover as he is surrounded by fellow scientists who worked on the rover program. Pictured from left to right are Paul Geissler, Janet Richie, Ella Mae Lee, Annette Sunda, Bonnie Redding, and Lauren Edgar.

A photograph of Opportunity's landing site, named Eagle Crater, captured by the rover.