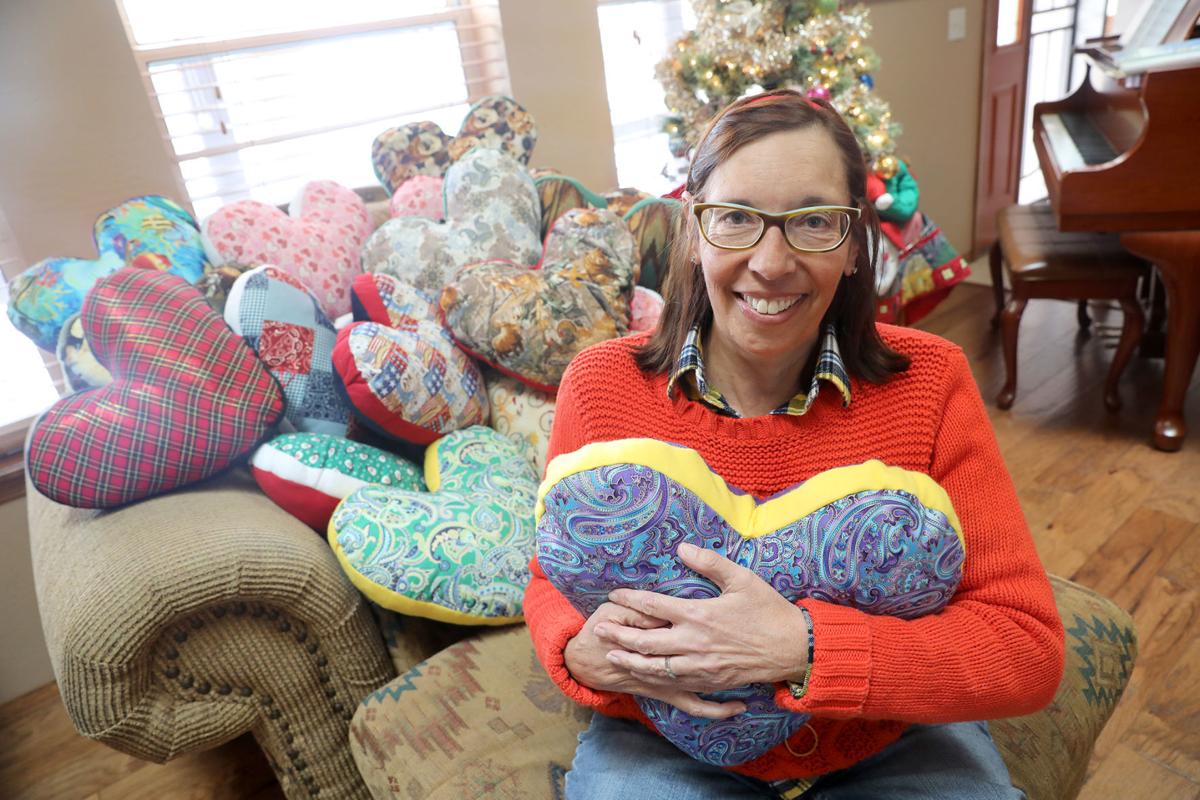 Jill Austin sits hugging one of the heart pillows that she sewed as a chair behind her is filled with similar pillows. Austin, who is a physician assistant at Flagstaff Medical Center, works in the operating room where patients are having heart surgery. The post-operative heart pillows are tools used by the patients to hug while taking deep breaths and coughing during their recovery from surgery. 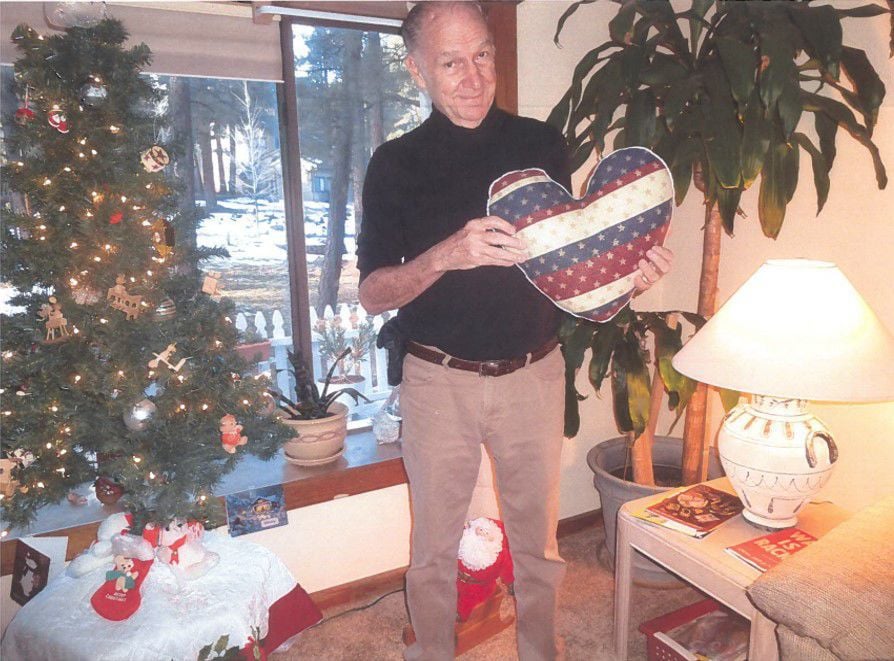 Kurt Brydenthal poses with his heart pillow just before Christmas.

In April 2017, Flagstaff Medical Center patients were in need of heart help, and not just the surgical kind.

When the shipment of heart pillows to the hospital was placed on backorder, members of the cardiovascular surgery unit (CVSU) frantically sought an alternative to this longtime tool.

Days stretched into weeks without any pillows arriving, but patients remained in constant need.

“The nurses were doing the best they could, wrapping up blankets with tape while these pillows were on backorder,” said Jill Austin, a certified physician assistant who has worked in Flagstaff since 2015.

Weighing more than five pounds each, though, these bundles were heavy and cumbersome for older patients. When one man coughed so hard he actually ripped his sternum back open, Austin knew the time for waiting was over.

So she made the pillows herself.

Using free online templates, she sewed and stuffed various pillow prototypes, allowing hospital staff to choose the one that would be most useful for patients. Once they did, she started making as many pillows needed to cover that month’s patients.

With their diverse designs and personal touch, the pillows were an instant hit, so Austin continued to make them – and has ever since. Donations from her coworkers to a “pillow fund” have helped her do so.

Since she started, Austin has created and donated more than 450 unique pillows for FMC patients.

“I have a lot of patients that make comments about them and they bring them back to the clinic to show they are still using them and that they appreciate them,” she said.

As in hospitals across the country, for years, FMC has provided heart and lung surgery patients with a heart-shaped pillow following their procedures. When a patient is going to cough, sneeze or breathe deeply, they simply squeeze the pillow to their chest – or under their armpit, for lung surgery patients – to prevent their incision from reopening. The pillows can also be used when the patient leaves the hospital, to prevent a car seatbelt from rubbing against their chest.

FMC had ordered simple red heart pillows common to many hospitals – featuring a depiction of the cardiac anatomy and the hospital’s logo – until Austin’s dedicated handiwork made them obsolete.

Austin’s pillows are made of four parts: three pieces of fabric and a loop to hang the pillow from a patient’s IV pole for easy access. The distinctive front fabric can vary from simple patterns to holiday or seasonal themes and hobbies. If the nurses know something about the patient, they can choose a design specific to that individual.

The design is paired with a matching solid color for the backside of the pillow, to allow space for cardiac anatomy drawings that explain the procedure to patients or for the signatures of the individuals who helped with the procedure.

To gather necessary materials, Austin visits craft stores in Flagstaff, Phoenix and online to purchase specific designs and other materials like stuffing and thread. She makes batches of up to 20 pillows at a time, but said if she were to make just one from start to finish, it would take about an hour. Although she uses coupons and often buys in bulk, she expects each pillow costs about $2.25 to $2.50 to make. She said they are not a financial burden to her, though, because she enjoys creating them. It has become one of her hobbies, she explained.

Sydow said the pillows are like a badge of honor for many patients – proof that they made it through the surgery. It also shows the high level of care in the CVSU.

“It exemplifies our team and our commitment to our patients. Jill saw a need and knew she could make it better, so she did,” Sydow said. “Despite everything else she does, she still finds time to make our pillows.”

Kurt Brydenthal was one recipient of Austin’s pillows. He said it was essential to his recovery after heart valve surgery in August. For the three months he used the pillow, it was both functional and comforting.

“I don’t know what I would’ve done without it. I can’t imagine not having a pillow, especially right after the operation," he said. "The first month would have been really horrible without it."

His wife, Barbara, said her mom received a standard manufactured heart pillow over 25 years ago following surgery in South Carolina; however, it lacked the personality and meaning of Austin’s pillows.

Kurt reached out to the hospital to find out who had created the pillow that made such a difference to his recovery, so he could thank her and contribute to her pillow fund. Expecting an organization to be responsible, he was surprised when he learned Austin was behind it all.

“I never felt so appreciated by somebody who doesn’t even know me. I wanted to donate so Jill could buy the materials to make someone like me feel great again,” he said.

Through these simple but meaningful creations, which she intends to continue producing, Austin provides patients with a piece of her heart in their journeys to heal their own.

“Do good, be good,” says local business owner Sharon Tewksbury-Bloom, who both named her organizational development work using this motto and …

Coconino Community College recently appointed a new nursing director and is using the opportunity to rework the program.

Flagstaff organizations based on giving thrive during the holidays

The Christmas season reflects the spirit of giving, with a spotlight on two of the biggest organizations in northern Arizona: Arizona Communit…

Flagstaff City Council passed an ordinance that treats e-cigarettes and vaping in the same way as commercial cigarettes, much to the chagrin o…

In a 30-second glimpse into the life of cancer patients, one woman shaves her head, while another bandages her chest and a third attempts to a…

Jill Austin sits hugging one of the heart pillows that she sewed as a chair behind her is filled with similar pillows. Austin, who is a physician assistant at Flagstaff Medical Center, works in the operating room where patients are having heart surgery. The post-operative heart pillows are tools used by the patients to hug while taking deep breaths and coughing during their recovery from surgery.

Kurt Brydenthal poses with his heart pillow just before Christmas.