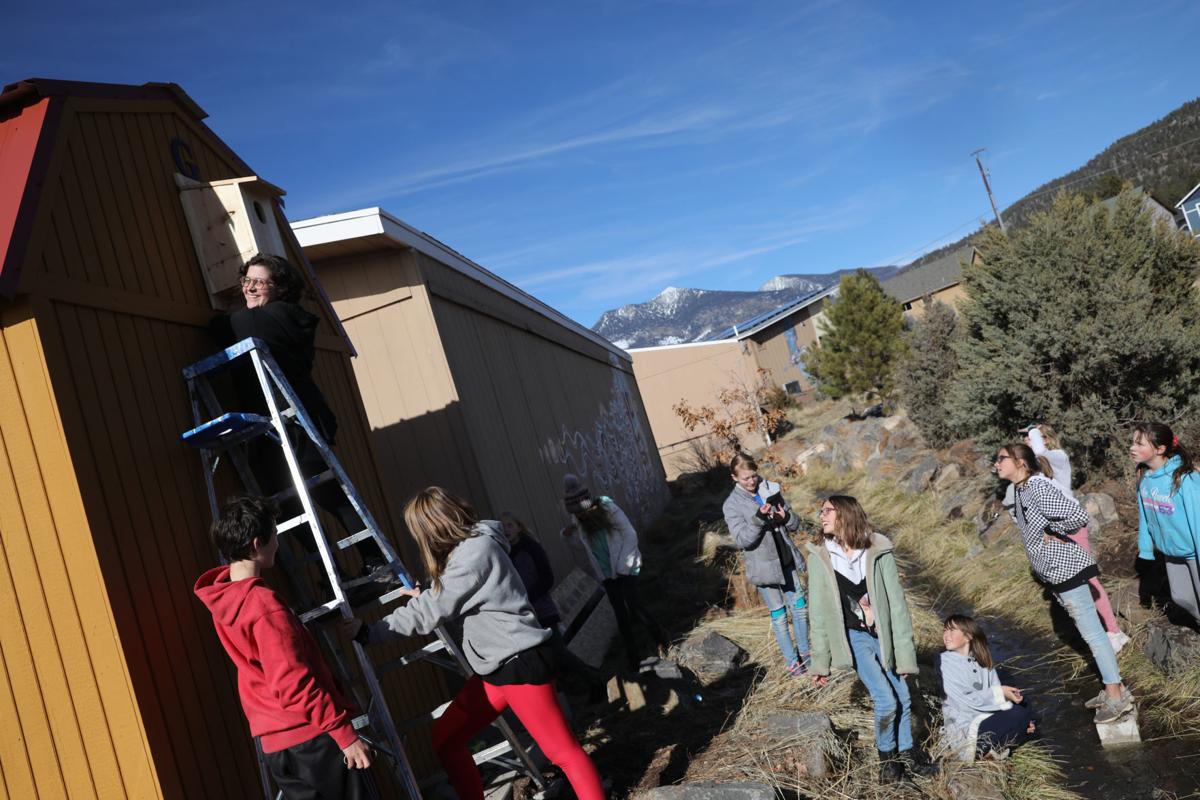 Maya Rappaport installs a kestrel nesting box on the back of a building at Flagstaff Arts & Leadership Academy on the edge of an open meadow. 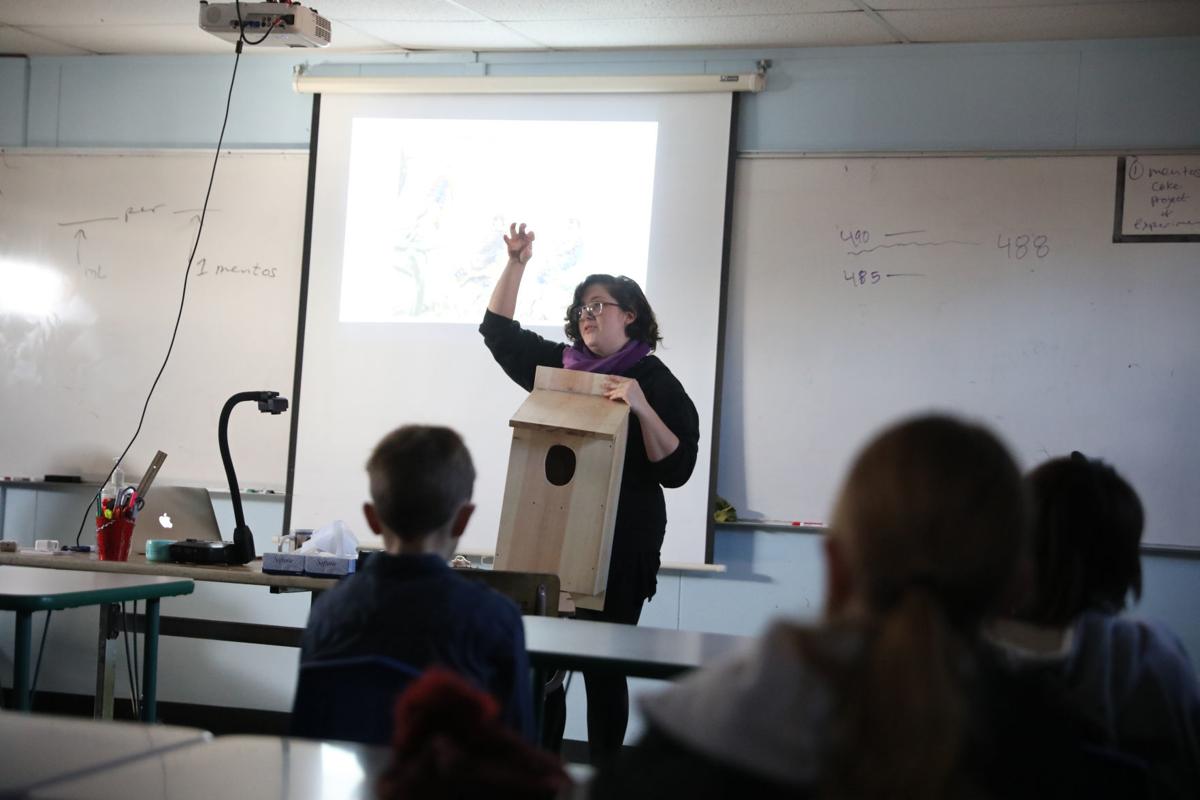 Maya Rappaport talks to a class of students at Flagstaff Arts & Leadership Academy about kestrels while holding a nesting box that she was about to install on one of the school buildings on the edge of an open meadow. 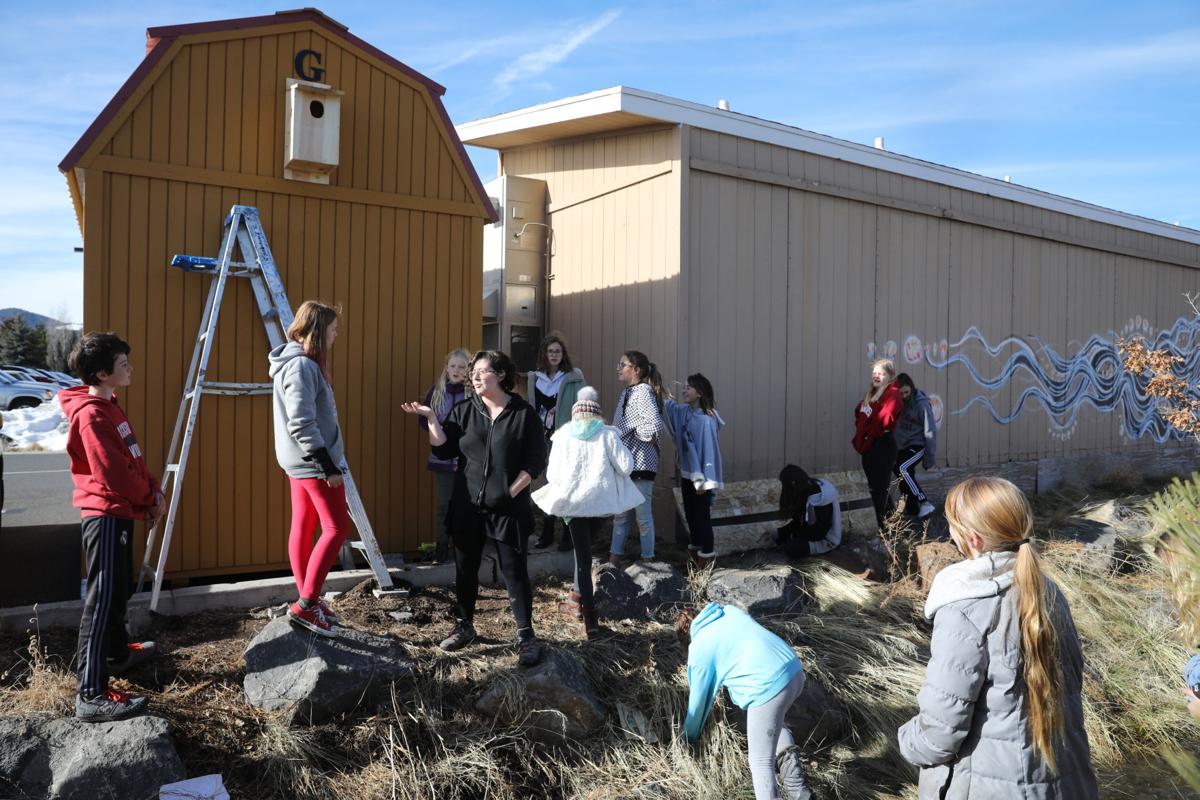 Maya Rappaport talks with Flagstaff Arts & Leadership Academy students  after installing a kestrel nesting box on the back of a school building on the edge of an open meadow.

Maya Rappaport installs a kestrel nesting box on the back of a building at Flagstaff Arts & Leadership Academy on the edge of an open meadow.

Maya Rappaport talks to a class of students at Flagstaff Arts & Leadership Academy about kestrels while holding a nesting box that she was about to install on one of the school buildings on the edge of an open meadow.

Maya Rappaport talks with Flagstaff Arts & Leadership Academy students  after installing a kestrel nesting box on the back of a school building on the edge of an open meadow.

A master's student at NAU is studying how to save two species threatened by the side effects of changing habitat: a bird of prey called the American kestrel and an odd species known as “humans.”

Maya Rappaport’s Flagstaff Kestrel Project focuses on creating a community of citizen scientists that will help provide suitable nests for the kestrel, whose populations have been in decline locally and nationally. Through her project, she will study how to make conservation citizen science more fun and open to everyone in light of rapidly shifting climates. She hopes others could use her study to help create similar conservation projects to help ecosystems threatened by climate change.

“It’s like this come one, come all attitude,” Rappaport said. “I want you to be involved in this project if you have been a conservationist, or know you’re going to be a conservationist, and I also want you to be involved in this work if you’ve never thought about it before and don’t have much interest for the time being. I think it’s meaningful in both ways.”

Like many other species, kestrel populations have been in decline across the country. Their decline is largely associated with decreasing grassland, food sources and an increase in human disturbances. It is not on the list of federally protected species, but Rappaport has found the kestrel has declined about 60% nationally, and 51% over the past 60 years on the Colorado Plateau.

Rappaport described the kestrel and her project to students at Flagstaff’s Arts and Leadership Academy. After, they helped her install a nestbox — a large nesting box made by project volunteers — on the back of a shed at the academy.

Rappaport has planned her volunteer groups to create a diverse mix of experience and age group populations in the hopes of providing new perspectives for her volunteers. Then she’ll survey the volunteers about their experiences and what they liked and didn’t like.

“We have to focus on the buy-in,” Rappaport said. “It needs to be fun, interesting and exciting, or else it’s not self-sustaining.”

Ynara Halaverda, a FALA student, said she thinks the kestrels will like the nestbox she helped put up at FALA, because she knows there are tons of grasshoppers in the grassy area near her school.

“I think it’s really cool and helps FALA be a part of the community,” Halaverda said.

Rappaport is an avid birder, and said the kestrel was an easy choice for her project, calling it a “charismatic” bird of prey.

The kestrel likes to perch in prominent places like telephone wires and fences, she said, and its bird call is loud and distinct. Additionally, the kestrel is one of a few birds who can hover in the air, similar to a hummingbird, and can be spotted hovering above grasslands before it attacks its prey.

The kestrel is a rare species that can sometimes lay eggs twice in one season. A normal litter can reach up to six or seven quarter-sized eggs.

“When they’re little, they can really fit into that space really, really well,” Rappaport said to the FALA students. “They’re mostly fluff.”

Kestrels are known as cavity nesters, meaning they nest in holes and enclosed spaces in trees or the project’s nestbox. Kestrels prefer to nest around 10 feet in the air, adjacent to a flat grassland. But Arizona’s grasslands are becoming scarcer, only covering 31% of their historic range in Arizona, Rappaport said.

“If all insects in an area are gone, kestrels are going to suffer and they’ll starve," Rappaport explained to a student who asked about why kestrels are declining. "We’ve also done a good job of applying pesticides pretty broadly across our country without thinking about the different consequences.”

Rappaport said even if the nestbox stays empty this mating season, it’s still valuable data on where are bad places to put nestboxes. She said she wouldn’t be surprised if other animals that like to nest in similar areas took to one of the nestboxes.

Mya Winfree, another student at FALA, said she was already interested in helping endangered animals, especially bigger cats. For this project, she liked how close the box was to her school so she can continue to check on it.

“I’d like to know, if one family moves out, will another move in?” Winfree said.

In light of a changing climate, Rappaport feels her research is asking a question that social science needs to be more concerned with: what is the best way to involve people in climate action?

“It really is looking at points of connection between these raptors that live on the outskirts of Flagstaff and the human community that is in their midst,” Friederici said.

Friederici said Rappaport has spent a lot of time looking at other community-level conservation projects and modeling the best way to entice people to create citizen science.

Rappaport said kestrels are a great way to enter into conservation work, because they are what scientists call an indicator species. Researchers have found that an increase or decline of certain bird populations often says something about the health of an ecosystem, like whether prey is increasing or habitat is declining.

Rappaport is one of many who have seen the patterns of this decline. As grasslands decline, kestrels lose their space for foraging. As humans build homes, kestrels are left without a place to nest.

For Rappaport, she believes that the same theories that have fueled social movements and created radical social change in the past need to be applied to the environment.

“We need to think about environment in the same terms,” Rappaport said. “How are we going to confront the monstrous issues of climate change and species loss without people power?”

As an osprey emerges from a pond and flicks water off its feathers, Thomas Hedwell points to the gold color sticking from its talons.