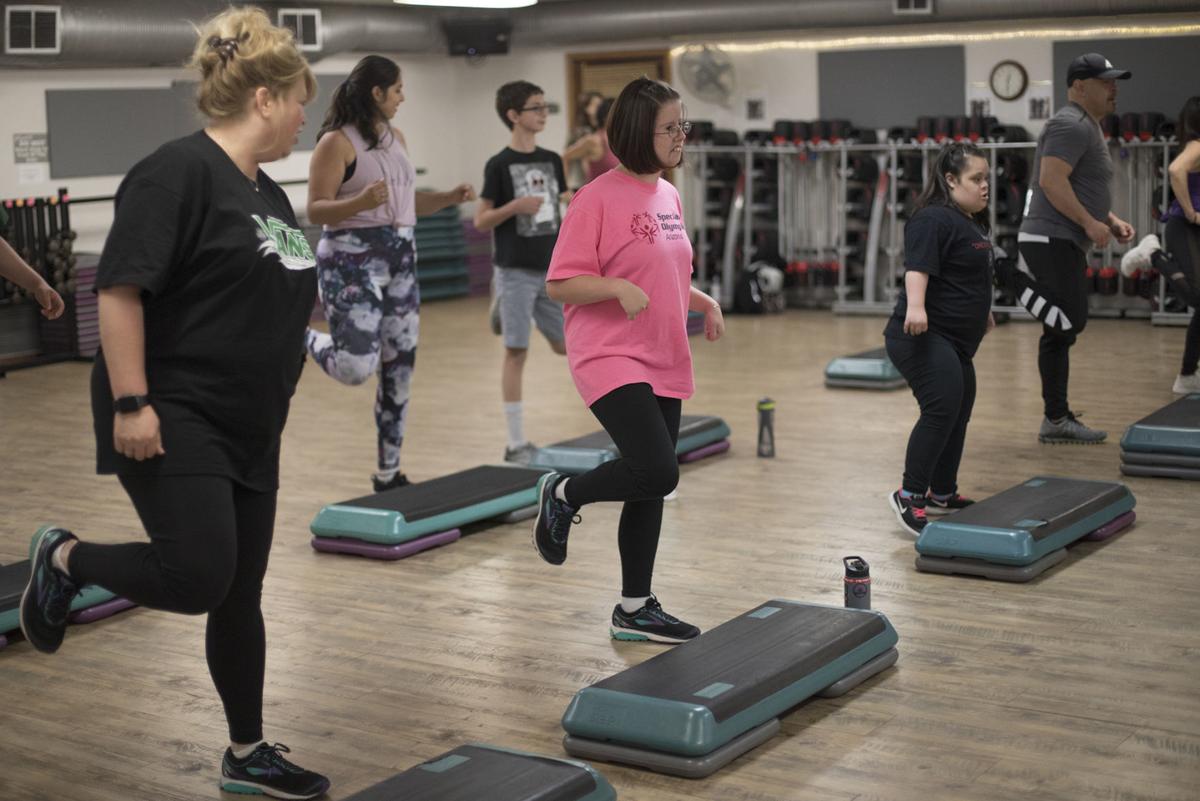 Celeste Harris (center) works on her balance Saturday afternoon during a special fitness class at the Flagstaff Athletic Club. 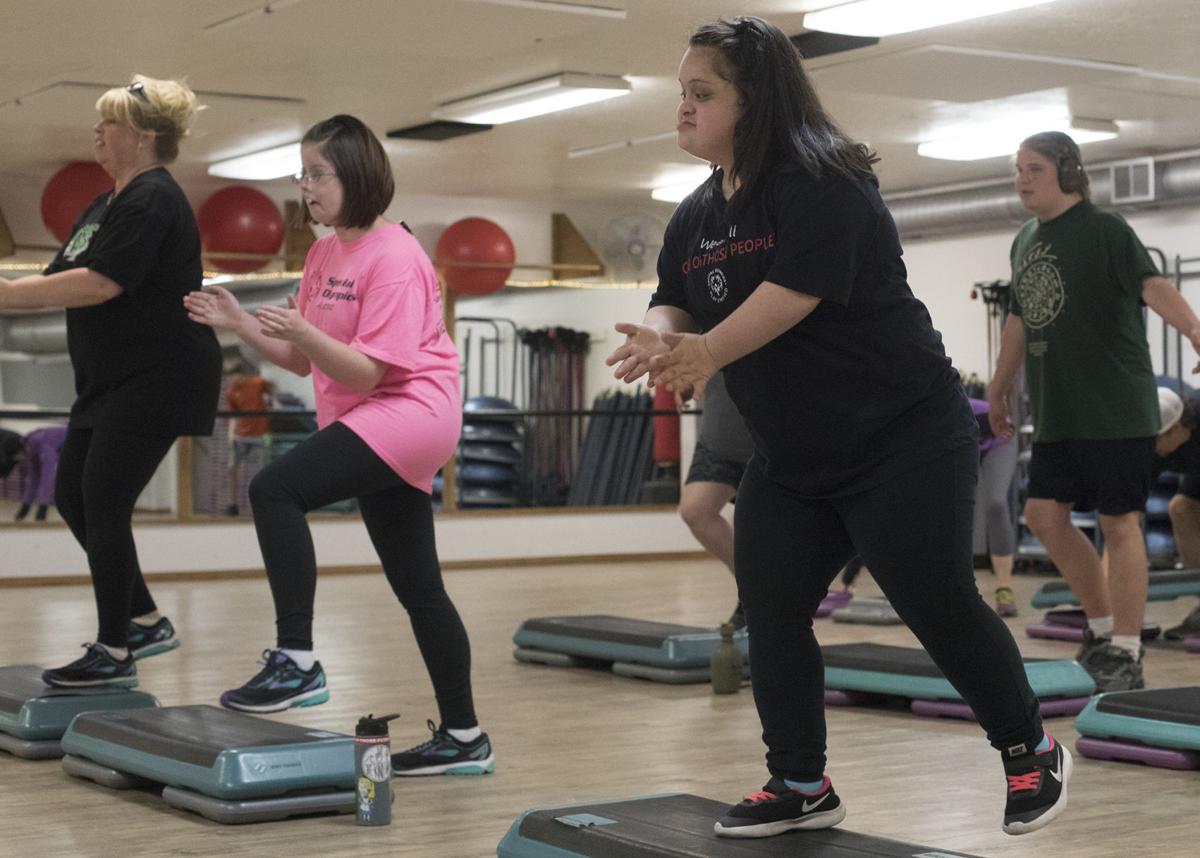 Zoe Strain (right) works on her form Saturday afternoon during a special fitness class at the Flagstaff Athletic Club. 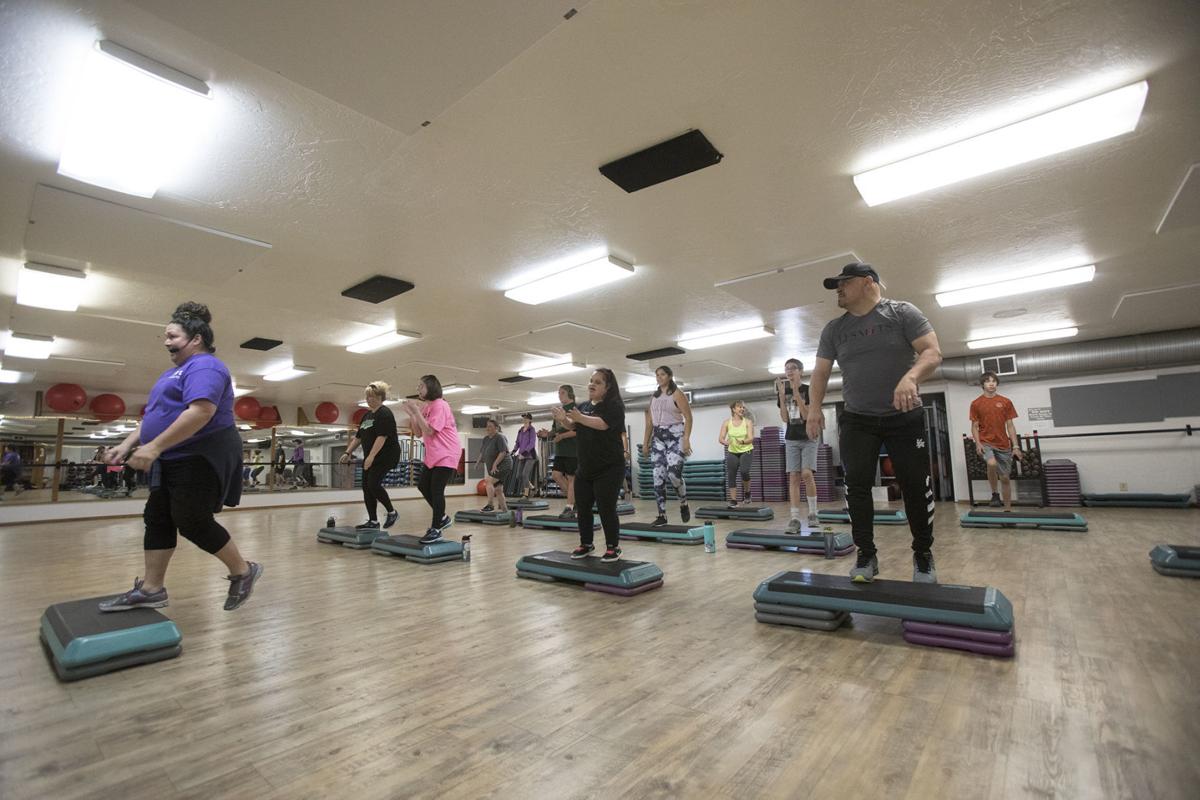 Laurie Cortez leads a fitness class that welcomes individuals and families with special needs Saturday afternoon at the Flagstaff Athletic Club. For more, see a story later this week in the Arizona Daily Sun.

Celeste Harris smiles and claps her hands to the beat as she follows along with step instructor Laurie Cortez at a Special Athletes Group Fitness class at Flagstaff Athletic Club’s West Route 66 location.

Celeste mimics her mother, Kristen, and tests her balance by putting her left leg up in the air behind her. Celeste and Kristen are both wearing black leggings and identical black, purple and green tennis shoes. Celeste also sports a bright pink Special Olympics Arizona T-shirt.

Kristen says Celeste loves sports and everything to do with the Special Olympics. Out of all the activities she participates in, including track, cheer and bocce ball, floor hockey is her favorite.

“She’s very social and goes to the capital every year to explain how Special Olympics has changed her life,” Kristen said.

However, when Coconino High School is on summer break and her adapted P.E. class where she does her Special Olympics training is on hold, physical activity for Celeste can hit a lull.

With FAC’s new Special Athletes Group Fitness classes, the goal is to create a fun environment for those with special needs to work out with their family and friends.

Like Celeste, FAC employee Janelle Strain’s 17-year-old daughter Zoe has Down syndrome and is “very heavily involved with the Special Olympics.”

Earlier in the year, Janelle approached FAC management with the idea of utilizing their facilities as a way to continue training Special Olympians outside of school. The owners approved, and in March the first class began – a modified Zumba dance class, followed in April by a weightlifting class.

All classes are run by volunteer fitness instructors and are completely free for the special athletes and their families, whether FAC members or not.

“We encourage family members to stay and work out and enjoy group fitness together,” Janelle said, adding that it creates a bonding time for the athlete and their family.

Janelle usually teaches high-intensity, high-cardio workout classes like Les Mills’ BodyPump and BodyCombat, but makes sure the special fitness classes are properly suited to meet the specific needs of the attendees.

Since people with Down syndrome can get exhausted more quickly, the classes never go past 45 minutes and there are plenty of stretch breaks and water breaks. The instructors adjust each class based on the participants’ physicality and further modify it as the class continues.

“For kids that have autism, [we make sure to] modify the environment of the room and how loud the music is,” Janelle said.

According to the National Center on Health, Physical Activity and Disability, children with Down syndrome have higher rates of obesity and become more inactive as they grow older, with adolescents 15 years or older the most sedentary.

Zoe had a regular FAC membership in the past, but Janelle found that Zoe was not particularly enthusiastic about independent activity like running on a treadmill.

“Now Zoe absolutely loves coming to the club and looking forward to a class with an instructor and music,” Janelle said.

Kristen is also the Life Skills coach at Flagstaff High School and helps train her students for the Mountain Area Special Olympics.

“It seems like [Celeste] enjoys seeing her peers in a different environment outside of school,” Kristen said, adding that it has also helped her daughter open up the doors to new friendships.

One program feature that Kristen said her students love is Unified Partners, which pairs Special Olympians with peers without disabilities in team sports. The group fitness classes are another way for those with disabilities to be included in a fun activity with community members, which isn’t always the case.

Carol Sharp, who teaches Life Skills classes at Sinagua Middle School, said she thinks the new classes are a fantastic idea and makes sure her students’ parents are aware of them.

“For the [special athletes], like anyone else, it is more motivating when [one] works out with a partner or group,” Sharp said.

Flagstaff Athletic Club's next Special Athletes Group Fitness Class will be an R.P.M. cycling and dance party Saturday, June 29 at 12:30 p.m. at 1200 West Route 66. Anyone with special needs ages 12+ and their family is able to join; check in with the front desk.

Early Thursday morning, Jesse McGirl sat at a table in Flagstaff's High Country Conference Center, a bundle of medals around his neck. McGirl …

Before the 2018 election, non-profits providing care for those with disabilities found themselves in the middle of the fight over Flagstaff’s …

In a brightly lit studio connected to Hozhoni Art Gallery, Miranda Delgai works meticulously with a needle and thread to embroider an alligato…

Evolve Flagstaff’s co-owners Brian Kinslow and Abby Chan may be getting married at the end of the month, but their physical therapy and nutrit…

Celeste Harris (center) works on her balance Saturday afternoon during a special fitness class at the Flagstaff Athletic Club.

Zoe Strain (right) works on her form Saturday afternoon during a special fitness class at the Flagstaff Athletic Club.

Laurie Cortez leads a fitness class that welcomes individuals and families with special needs Saturday afternoon at the Flagstaff Athletic Club. For more, see a story later this week in the Arizona Daily Sun.