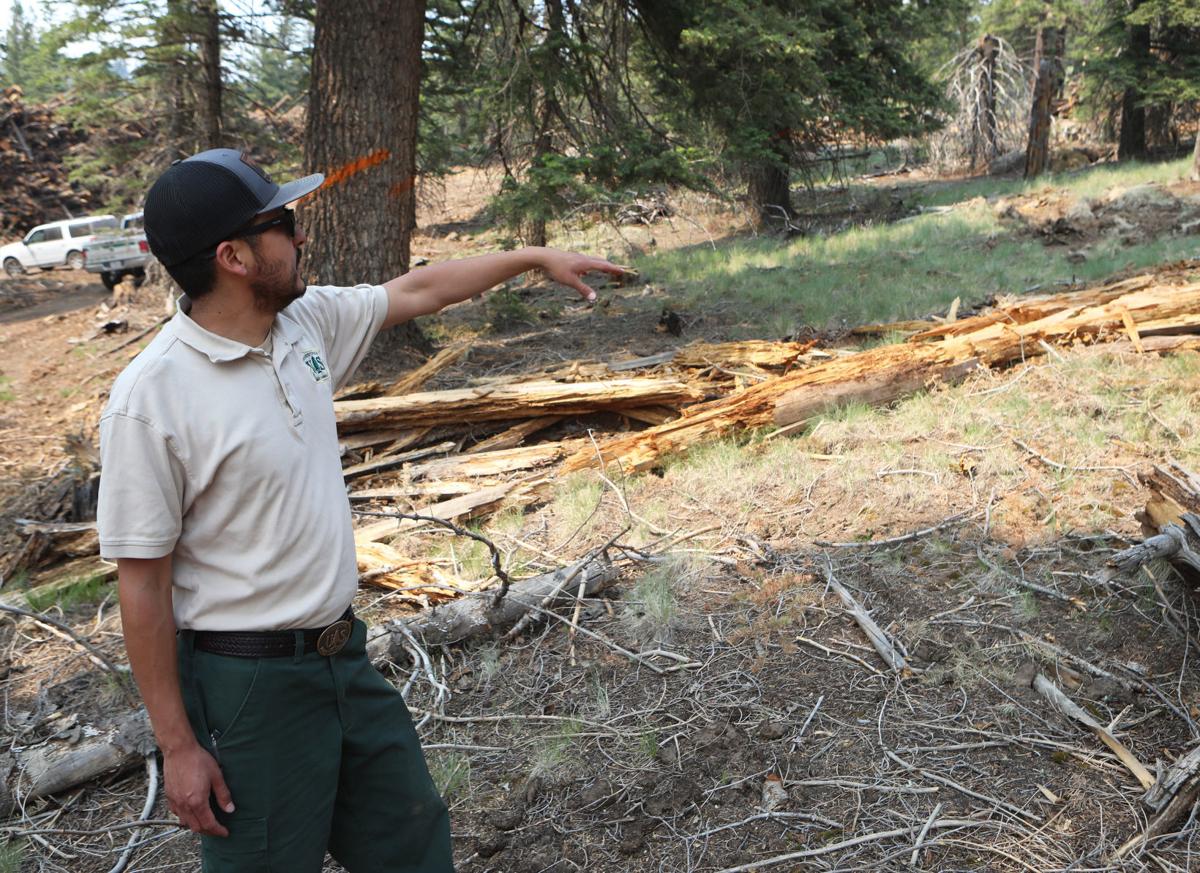 Jacob Lopez, the contracting officer representative overseeing a large portion of the thinning procedures taking place near the Schultz Creek Trail, addresses why the area needs to be thinned. 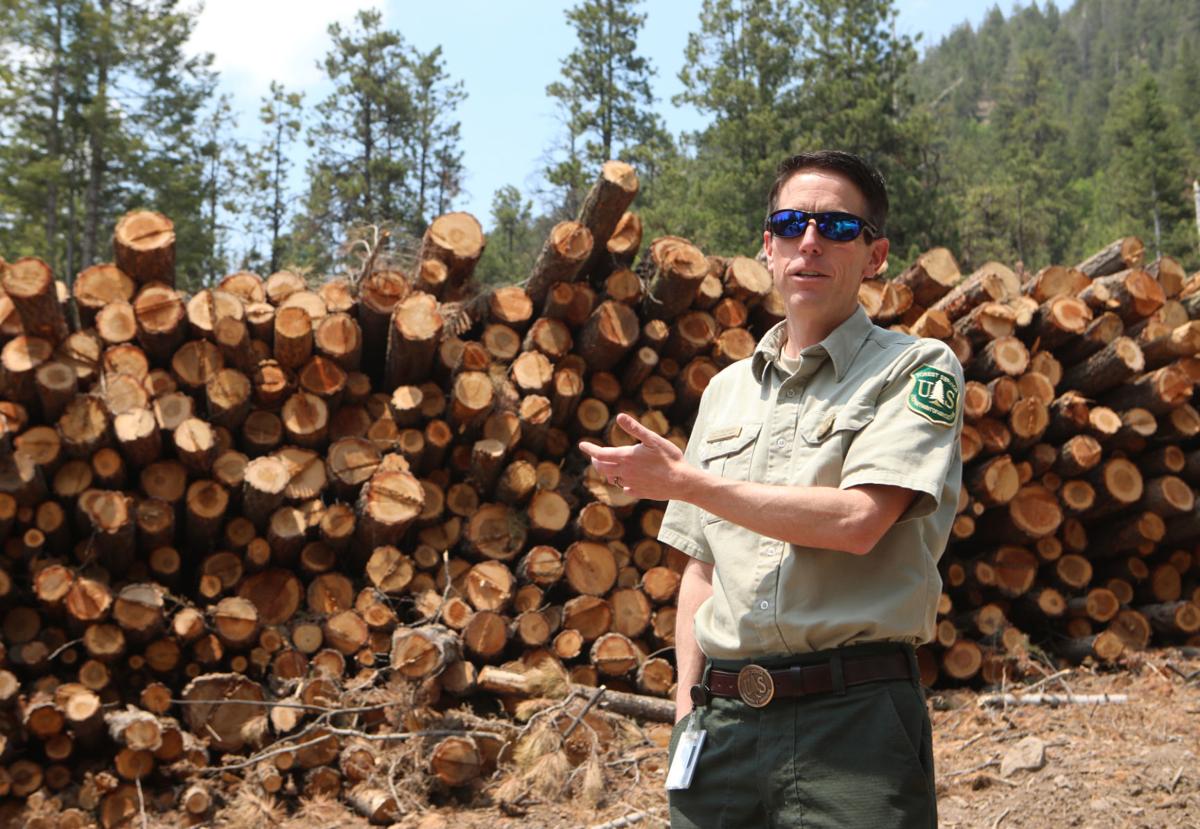 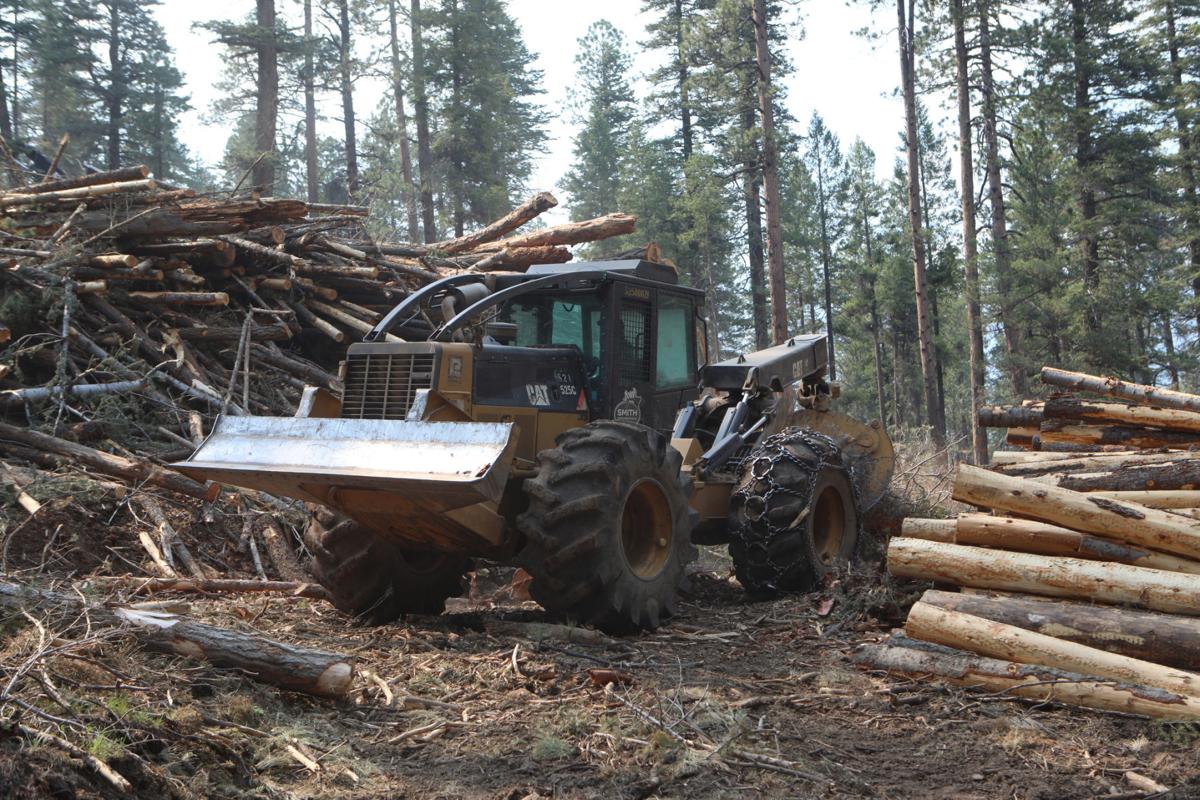 A log skidder clears trees from a steep slope thinning site near the Schultz Creek Trail in an effort to better prevent the risk of wildfires Tuesday evening.

As Flagstaff District Ranger Matt McGrath drove an SUV down Schultz Pass Road within the Dry Lake Hills thinning closure area, the tires churned up dirt and dust into the air.

Kevin Lehto, a U.S. Forest Service recreation specialist sitting in the back seat, pointed to a lone, out-of-place ponderosa pine lying on the side of the road in front of the SUV’s path. The tree was easily taller than any person, detached from its original roots and marked by a saw.

“That tree dropped out of a helicopter, right there,” Lehto said. “Little branches would hurt and can knock you out cold. But that?”

“That would be the end of you,” McGrath said.

Trees like that pine, which can fall like a dart into the ground from the helicopter logger’s clamp, are much of the reason Forest Service officials closed access to the Coconino National Forest for the Flagstaff Watershed Protection Project in January. But, after several months of work, McGrath said they will be opening a large portion of the forest sometime next week. McGrath said they would modify their closure area on Wednesday, June 26.

Schultz Creek, Upper Brookbank and Forest Road 789 will remain closed to all use, while Forest Roads 420 and 557 will open to non-motorized vehicles. The rest of the Dry Lake Hills area will be open for anyone to enjoy.

On Tuesday, June 25, Forest Service officials announced that Upper Oldham Trail would be opened, despite a fallen tree that has blocked the trail. Authorities said they will release an updated forest closure map on Wednesday.

Fire Management Officer Paul Summerfelt said as people return to the mountain, the City of Flagstaff and the Forest Service wanted people to be conscious about the dangers of log decks, logging vehicles on the roads and the continued risk for fires. Summerfelt said the forest debris and logs can look jarring to people who return to the mountain, but the city and Forest Service will be working over the next one to two years to remove the forest debris in the area.

“As grasses begin to come in, and slash piles are burned or moved, and log decks go away, the visual appearance is going to improve dramatically over the next couple of years,” Summerfelt said. “It just takes a little time.”

The areas that remain closed are either closed because they are inaccessible trails, covered with logs and slash, or too dangerous for motor vehicles. They expect the areas will remain closed for an undetermined amount of months into the future.

Loggers will still be conducting hand and mechanical thinning even after the closure area is modified. Summerfelt said the mechanical, steep slope operations are two-thirds of the way completed, with 25 percent of the logs stacked, while there are 250 acres of hand thinning that will be occurring on Mount Elden this summer.

The log decks that have been stacked after helicopter and mechanical logging processes stand several layers of trees tall and in some cases hundreds of trees wide, and could easily crush any vehicle in their way.

There are six decks located throughout the thinning areas as a result of helicopter logging. The size and weight of the decks are measured in tons as opposed to pounds and can be only be moved by the truck load.

The largest deck with trees that came off the mountain is about 4,500 tons and will require 300 truckloads to move. However, despite the amount of weight these log decks have amassed, the decks are not supported by any other force besides gravity and inertia.

One forest official described the difficulties and dangers of the stacking process as “Jenga with chopsticks.” Forest Service officials want people to keep from climbing the decks or standing too close to the areas for fear of shifting logs.

Come next week, the helicopters will have cut the trees, but log and forest debris removal is another step entirely.

As people return to parts of the forest, they will likely see branches and needles, referred to as biomass, across the forest floor and some of their favorite trails. McGrath pointed out that some closed trails aren’t even visible or recognizable as trees and thinning debris has covered them.

Forest Service officials said cutting the trees gives the ground more access to sunlight and wind, and the coming snow and winter weather will also help the grasses grow in these areas. Adding grasses gives more access to wildlife in the area.

Some of the biomass is waiting to be piled and burned, or moved off the mountain. But while the biomass is lying on the ground, it can protect the soil and breakdown over time to provide nutrients for the soil, Forest Service officials said.

And in the meantime, the high amount of red biomass and logs on the forest floor will cause a heightened risk of fire. While the risk of fire will be high, the potential severity will be low. The biomass could possibly sit for an additional year or two in some areas.

The next step of debris removal will also cause more traffic on forest roads near and around the mountain, as some trucks will be taking logs to Phoenix to be made into pallets. They will also have vehicles to remove the biomass from the mountain frequently.

McGrath asked people and bikers on the roads closed to motorized traffic to yield to these vehicles, because the logging and biomass trucks cannot stop easily with the weight they’re carrying. He added that smaller trees, branches and biomass can additionally be sticking out of the truck or fall off the truck.

“Hopefully they’ll ride uphill on the road and go downhill on a trail, as opposed to the reverse, because that would be much safer,” McGrath said. “So in general, just stay out of the way.”

This article has been updated with new closure information on Tuesday, June 25.

Forest Service officials suspect a person is at fault for the Chimney Springs Fire near the Arizona Scenic Trail on Wednesday.

Jacob Lopez, the contracting officer representative overseeing a large portion of the thinning procedures taking place near the Schultz Creek Trail, addresses why the area needs to be thinned. 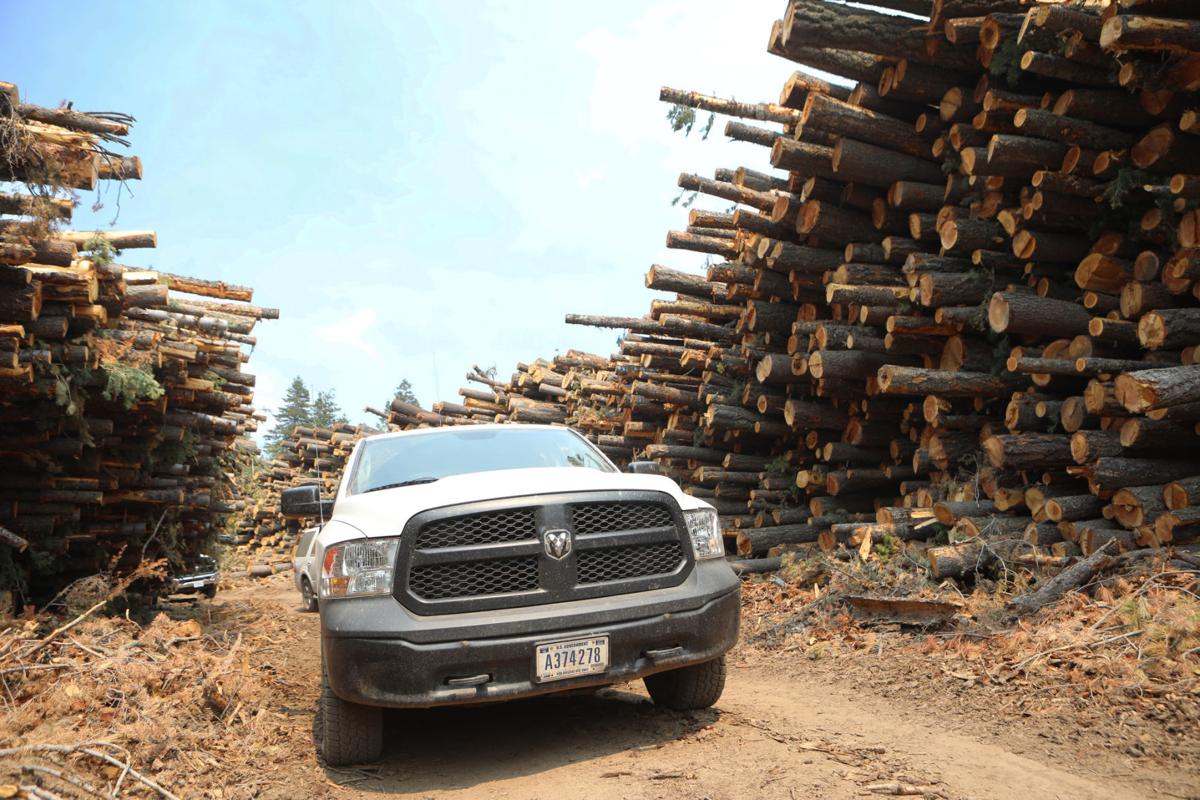 Forest Service vehicles drive past the largest log deck Tuesday afternoon in the thinning area near the Schultz Creek Trail. This log deck weighs about 4,500 tons and will require approximately 300 truckloads to move. 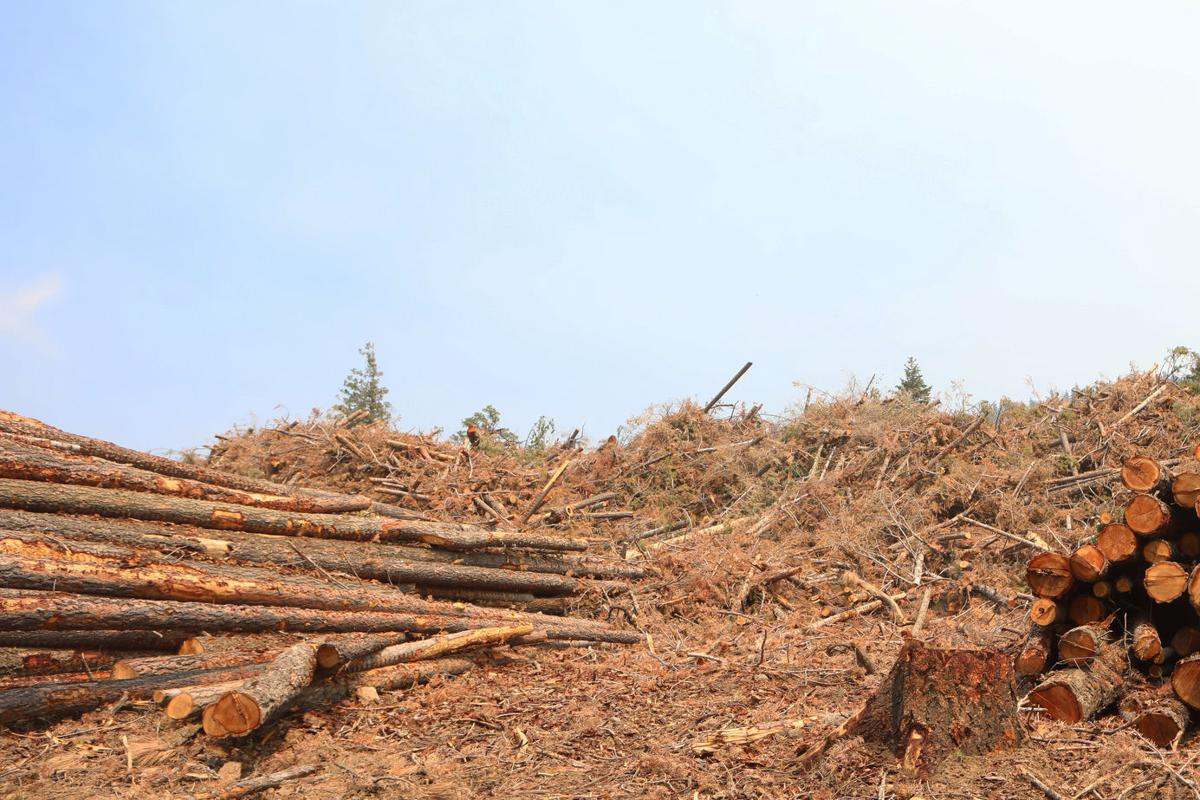 A large collection of pine-needles and bark commonly, called biomass, gathered within the thinning area of the Dry Lake Hills. 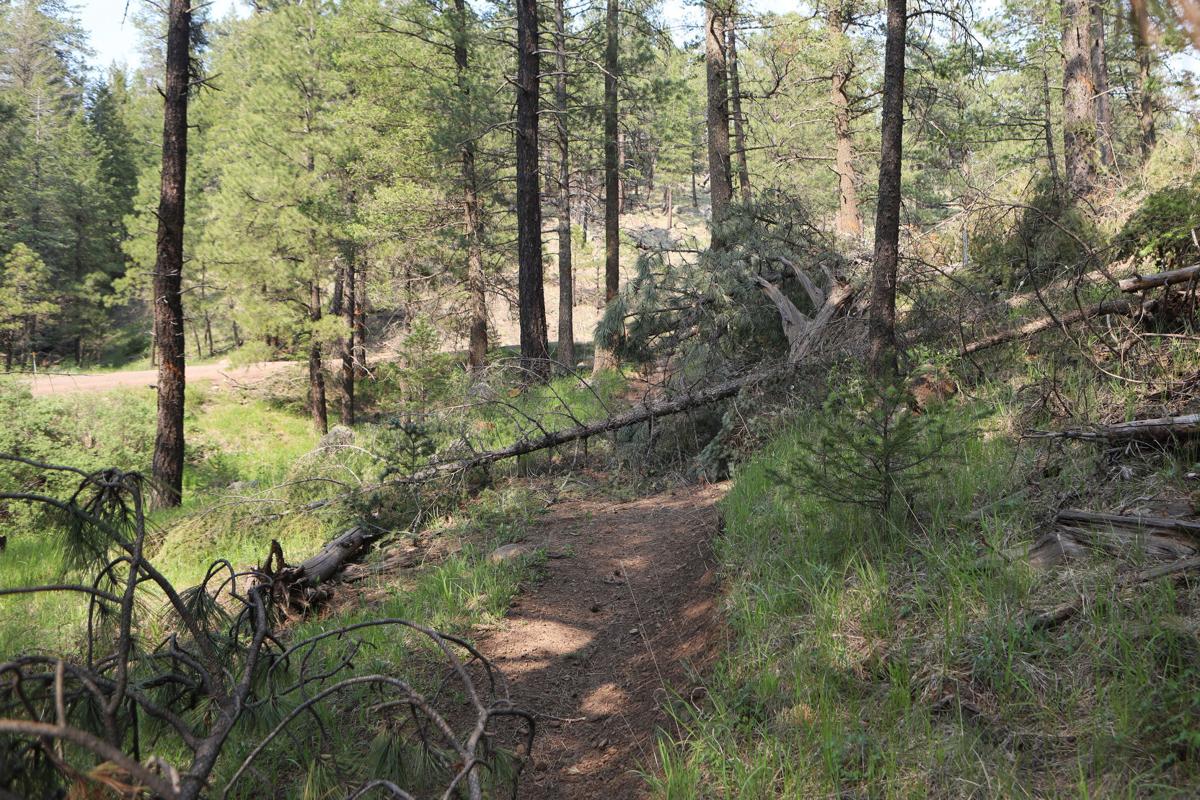 Portions of the Schultz Creek Trail are blocked due to thinning along the trail, and have been closed until they can be cleared. The Brookbank and Upper Oldham Trail will remain closed to all use until it can be cleared in the coming months. 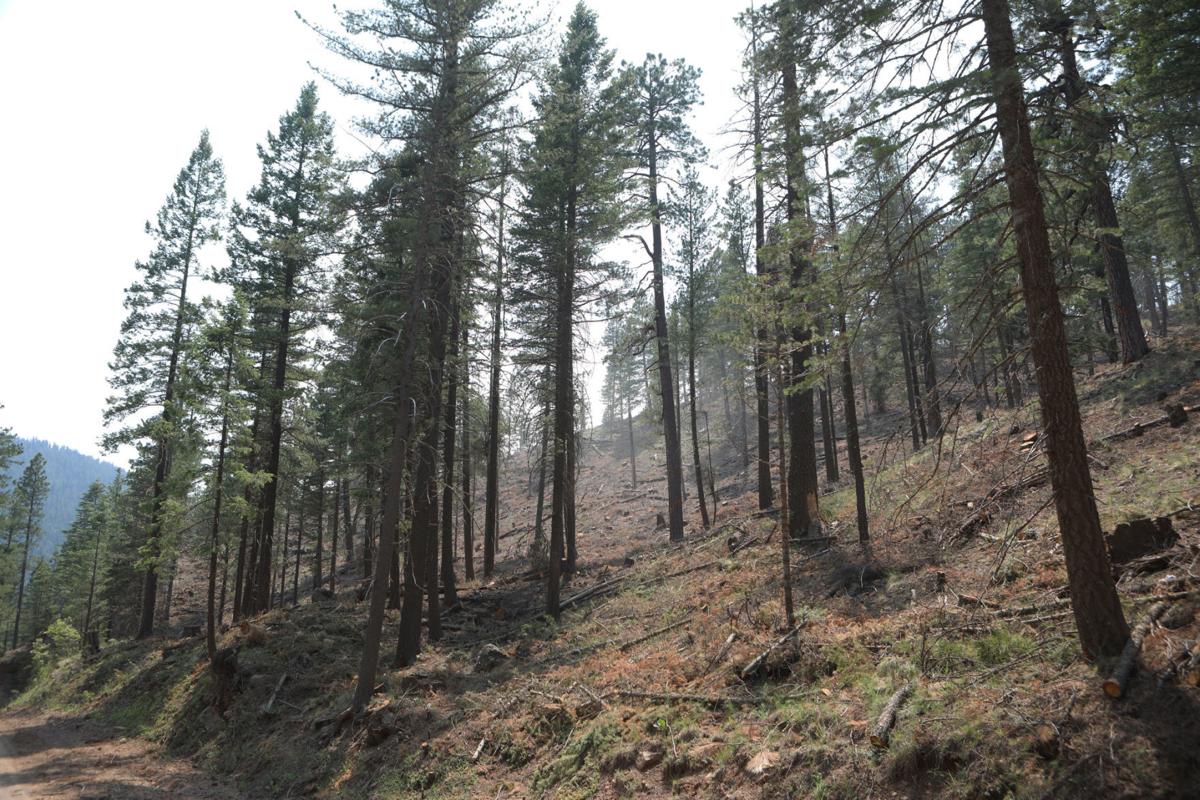 Areas of the Coconino National Forest have undergone large thinning procedures in an effort to reduce the chance of large forest fires.

A log skidder clears trees from a steep slope thinning site near the Schultz Creek Trail in an effort to better prevent the risk of wildfires Tuesday evening.