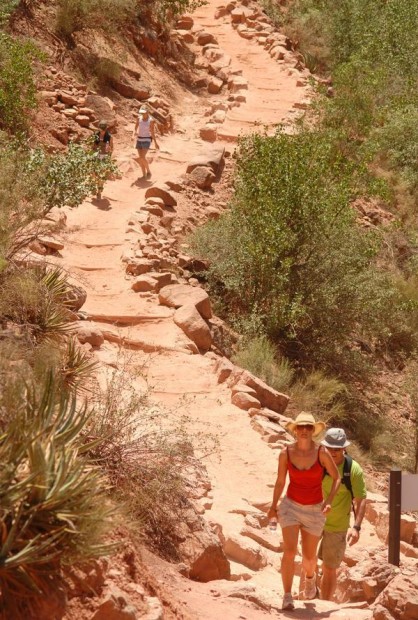 Hikers hike in the heat of the day on the Bright Angel Trail in the Grand Canyon. (Josh Biggs/Arizona Daily Sun) 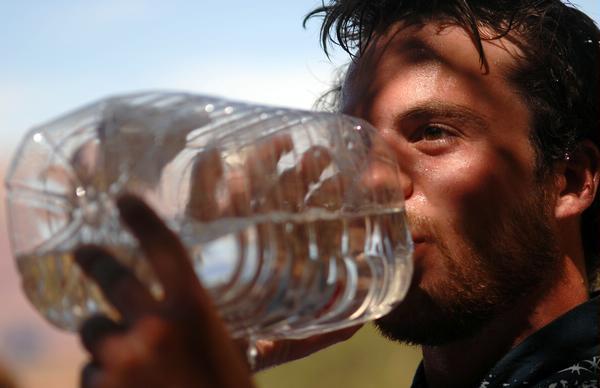 After finding shade a hiker guzzles down water while hiking in the heat of the Grand Canyon in July. (Josh Biggs/Arizona Daily Sun/Order this photo at http://photos.azdailysun.com) 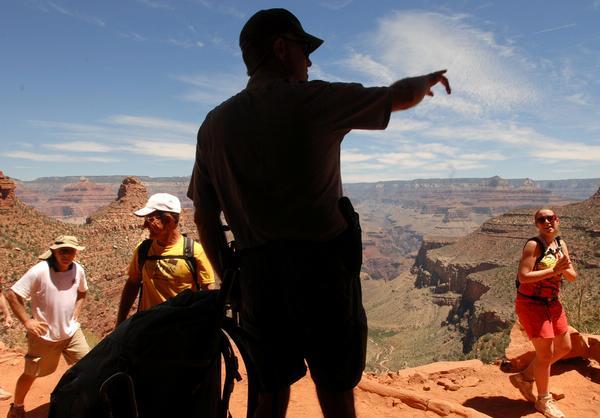 Grand Canyon ranger John Evans gives advice to hikers on how and where to avoid the heat in the Grand Canyon during hot, sunny days below the rim. (Josh Biggs/Arizona Daily Sun) 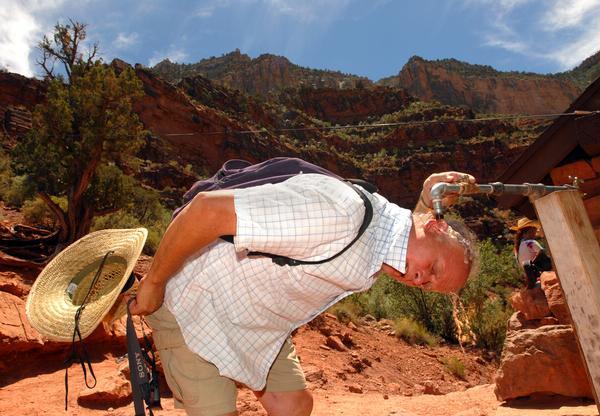 Jimmy Philp of Arlington, Texas, cools off under the water of the three-mile rest stop on the Bright Angel Trail on the South Rim of the Grand Canyon. Despite triple-digit temperatures below the rim, summer is a busy season for canyon hikers. (Josh Biggs/Arizona Daily Sun)
By CYNDY COLE
Sun Staff Reporter

GRAND CANYON NATIONAL PARK — It was about 2:45 a.m. when Colorado River boater Michael Golden, 71, set out from Phantom Ranch for the top of the Grand Canyon, 9.6 miles away.

More than 10 hours later he is still a couple miles from the top as the thermometer hits 96 degrees in the shade.

A ranger checks his vital signs and finds him to be all right, then recommends rest.

Three miles from the Bright Angel trailhead, a German visitor is nauseated.

Another ranger asks downhill hikers where they were headed, and whether they have food and water enough to make it out.

It's a typical summer at the Grand Canyon, when visitors get spanked by the heat and elevation, and the Park Service posts rangers hoping to keep them from needing rescue.

This is part of a larger effort since the 1990s to triple-warn hikers about the sometimes-deadly canyon, and the allure of heading down to the river and walking the equivalent of about 400 stories uphill in an inferno.

Tourists get handouts as they drive in and signs warning of those who have died as they descend.

Dale Dalbey, manager of a credit union in Alabama, was thoroughly warned about hiking the canyon in the summer before he launched on a Colorado River rafting trip.

"Canyoneers sends you this thing that says 'If you hike out, you're an idiot and you're going to die,'" he says.

Dalbey jokingly says he considered trying to hop on an out-bound mule.

"Once you get about 400 feet above sea level, you feel like you're having oxygen deprivation," he says.

Every summer night, people who planned to be out by nightfall are sleeping on the foot and mule freeway that is the Bright Angel Trail, unprepared.

Canyon District Ranger John Evans asks passing hikers whether they're eating and drinking and how far they're going. He has a friendly and joking demeanor as he dispenses advice and answers questions in English, French and Spanish.

"A plum? A whole plum?" he asks one struggling hiker with incredulity and a smile. "If you're not eating, it's very hard to get to the top."

On other days, for those who feel they just can't make it the last couple miles but aren't having a medical emergency, he tells them he'll request a mule, it will cost about $850, and it will arrive in three days.

Those people always make it out rather than wait.

And people stop him.

One says he doesn't like the number of mules.

Another thinks the Park Service should ban the use of cell phones on the trail for chatting, as is common near the top.

Another says her husband had survived cancer twice and hiking the Grand Canyon has been his lifelong goal.

The hikers are segmented like the rock layers of the canyon, Evans ponders, with the cleanest and most cautious near the top, and all manner of others down below.

Hikers here on Wednesday came because it was near home, or it was a dream, or because they were on vacation from somewhere in Europe (with a strong Euro against the dollar).

"It's all just nature here," says Alena Kraehenbuehl, 19. "In Switzerland, we have houses."

Lur and Heiko, of Germany, could travel more inexpensively in the United States than at home, they say.

Lur is wearing dress shoes, and the two university instructors planned to wait out the heat for a couple hours in a rest stop. They live in a town flat enough, they joked, that if someone was visiting Saturday you would see them en route on Wednesday.

"We're looking for the elevator here, but no one can tell us where it is," Lur says.

San Antonio motorcycle rider David Volitis and friends are hiking down into the canyon in the midday heat on a whim, with bottles of water, T-shirts and blue jeans, and nothing else.

"You know, when I see this, I see the very handprint of God," Volitis says of the canyon.

They aren't sure how far they were going, as the lower terrain grew hotter.

"I just heard this Baptist preacher the other day preaching on hell," Volitis says. "I'm beginning to feel it."

Visitors come in lightweight hiking clothes, and carrying designer purses, and sometimes in stilettos or barefoot.

Those in trouble sometimes seems spaced-out, unaware of what's going on around them.

"We call it the 100-yard stare," says ranger Christy Gluck.

And there's no way, says Evans, to judge by glancing who is prepared and who is not.

An 18-year-old with little knowledge or experience, but great gear and physical fitness, sometimes fares poorly.

Wednesday is fairly placid through the afternoon.

Most of those Evans advises to eat or sit seem willing to abide.

But it gets excruciating down here sometimes.

Up until 1989, Phantom Ranch had a mercury thermometer in the shade, next to a creek, and in several summers the temperatures on it exceeded the 120 degrees the thermometer could measure.

In years since, measurements of 119 in the shady creek-side have also been recorded.

In some cases, the individuals were a few hundred feet from the Colorado River or other water, and they sometimes included children.

In others, they were testosterone-driven young men raring to set incredible records, sometimes in incredible heat, state the authors.

So the Park Service started sending rangers down the trails to chat up hikers and warn them of the summer dangers, called preventative search and rescue staff.

There was one fewer death per year, on average, at the park in the following years.

The Park Service responded to 1,394 emergencies in and at the rim of the Grand Canyon year, with 13 fatalities, which is average for the past decade.

These include deaths from natural causes above the rim, along with suicide, which was the suspected cause of three deaths last year.

The staff at Indian Gardens has started a small library in the hope of persuading hikers to take a book and sit in a shady creek rather than head uphill midday.

The rangers, sometimes, get dehydrated and overheated, too, says Evans, and are trained to bow out of a hike or a rescue if it means potentially making themselves the subject of a rescue operation.

But even they are not immune.

"No matter what you do," he says, "every once in a while the canyon will smack you."

Don't be a statistic at the Grand Canyon

Here's how to avoid becoming a statistic at the Grand Canyon:

Insider tips: About half of the rangers carry umbrellas as portable shade. And while "cotton kills" is the motto in winter, in summer a light-colored cotton shirt can become a great swamp cooler if soaked in a stream or under a faucet. To avoid a dangerous imbalance of water to salt in the body, eat fatty, salty, caloric foods rather than healthier picks like dried fruits. Jerky, nuts and chips all count.

Drink one-half to one quart per hour while in the heat, alternating between water and a drink with electrolytes.

Pick a spot to turn around in advance.

Wait until you're hungry or thirsty to eat or drink.

Leave members of your party behind.

Hikers hike in the heat of the day on the Bright Angel Trail in the Grand Canyon. (Josh Biggs/Arizona Daily Sun)

After finding shade a hiker guzzles down water while hiking in the heat of the Grand Canyon in July. (Josh Biggs/Arizona Daily Sun/Order this photo at http://photos.azdailysun.com)

Grand Canyon ranger John Evans gives advice to hikers on how and where to avoid the heat in the Grand Canyon during hot, sunny days below the rim. (Josh Biggs/Arizona Daily Sun)

Jimmy Philp of Arlington, Texas, cools off under the water of the three-mile rest stop on the Bright Angel Trail on the South Rim of the Grand Canyon. Despite triple-digit temperatures below the rim, summer is a busy season for canyon hikers. (Josh Biggs/Arizona Daily Sun)
© Copyright 2021 Arizona Daily Sun, 1751 S. Thompson Flagstaff, AZ | Terms of Use | Privacy Policy
Powered by BLOX Content Management System from TownNews.com.
You don't have any notifications.