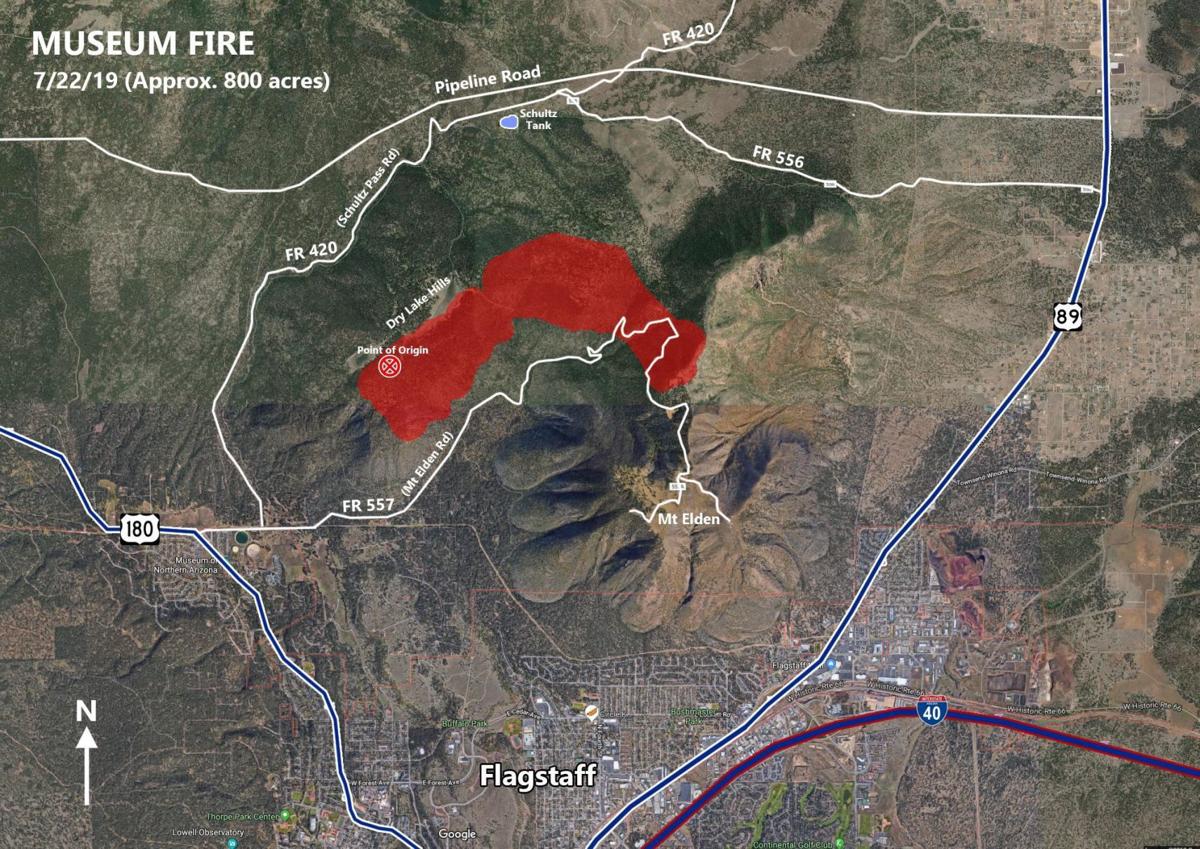 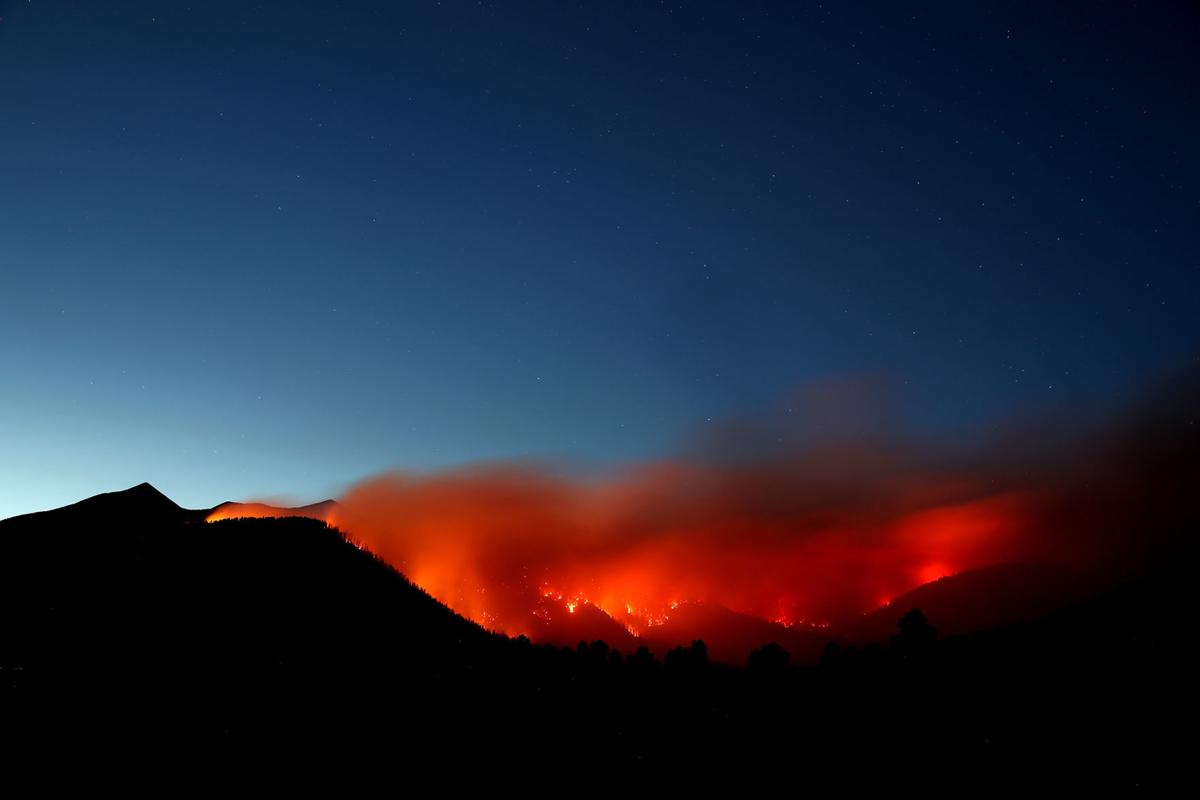 The Latest information from Tuesday will be included in our updating article that can be found by clicking here.

The Museum Fire burning in the mountains north of Flagstaff reached more than 1,000 acres after lighting up the San Francisco Peaks Sunday night.

"Wildland firefighters are using every available aerial platform in the southwest region on a wildfire in the Dry Lake Hills area north of Flagstaff today," according to U.S. Forest Service's most recent release.

While the Coconino National Forest expected to conduct burnout operations last night, officials say they were unable to do so due to the fire's behavior. The active fire was sending embers forward and starting smaller fires ahead of itself, commonly called spotting, meaning officials were only able to use indirect suppression tactics where they could.

Spotting occurred toward the east as hand crews worked to create a fire line to move toward containment. Simultaneously, planes and helicopters are attempting to suppress the fire by air.

The goal for the fire is to keep it east and south of Forest Road 420 or Schultz Pass Road, west of Highway 89, and north of Pipeline Road and those communities.

"The fire was flanked with retardant and water from more than a dozen aircraft Sunday in an effort to keep it in the Schultz Pass area and limit its spread north and south," according to the release.

Three hours after the fire had begun, it shot up to 400 acres. Now, as of 7:45 a.m. the fire has burned approximately 1,000 acres. While people have flocked to social media to document the fire from the streets with photos and comments, forest officials are reminding people that drones of any kind are prohibited from flying over the area. If a drone is spotted, forest officials ask you to call 911.

"When an unidentified aircraft, manned or unmanned, is sighted in the fire area, all air operations must shut down immediately," according to the release.

Heavy smoke will be visible from Flagstaff and other local communities. The public should use extreme caution when driving on U.S. Highways 180 and 89 north of Flagstaff and stay out of the fire area, according to the release.

Additionally, the county suggested that all of Flagstaff enter the "Ready" or "prepare now" stage.

The Coconino County Sheriff's Office determined the new communities needed to be added to the "Set" and "Ready" stages after utilizing a U.S. Forest Service aerial assessment of the fire. The Sheriff's Office and law enforcement personnel will be going through these neighborhoods to let people know of the "Set" stage and to be ready for future evacuation orders.

As 200 fire personnel battle the Museum Fire on the forests of the San Francisco Peaks, weather forecasters are concerned with how their Monday forecast will impact wildfire conditions.

George Jozens, spokesperson for the Coconino National Forest, said their main tactics for the Museum Fire burning through the forests on top of the Flagstaff peaks was fire suppression on the flanks and fire lines on the east side of the blaze.

“We’re trying to keep the fire east and south of Schultz Pass Road, to the north of Mt. Elden Lookout Road and west of Brookbank trail,” Jozens said. He added that they are using more than a dozen aircraft to put down retardant and water today, which have been effective on the flanks of the fire.

Meteorologist Darren McCollum with the National Weather Service forecast warmer temperatures throughout the day, and said any possibility of thunderstorms today would likely be small systems that bring wind and lightning, but little to no rain.

For that reason, the weather service’s main concern at this time is the personnel on the ground fighting the fire.

“The people out in the field, they have other things they’re working on and they may not be paying close attention to what’s going on above them,” McCollum said. “These storms can build up in a hurry and produce a quick lightning strike. We want to keep people safe out there.”

McCollum said at 10 p.m. that their most recent data forecasts smoke to continue to impact areas far east of Flagstaff including Doney Park, Winona, Cosnino and areas to the north and east of downtown Flagstaff.

However, satellite imagery the weather service posted on social media from 11 p.m. to 11:30 p.m. showed a different picture, with the smoke moving north and northwest.

According to the National Weather Service, the monsoon season so far -- June 15 through July 20 -- has been the fourth driest on record, with just 0.14 inches of precipitation. Flagstaff received 2.14 inches of rain in the same span last year, and averages 1.60 inches in NWS records dating back to the 1800s.

Tomorrow, the weather service forecasts a 60% chance of rain, including showers and thunderstorms mainly after 11 a.m. They forecast a 40% chance of rainfall continuing into the night.

Meteorologists also expect rain on Wednesday, with a 60% chance of precipitation.

Coconino County has added the following communities to the pre-evacuation notice, marking them in the "Set" stage on Monday, July 22.

Other areas already in the "Set" or pre-evacuation stage are areas of Mt. Elden Lookout Estates, north and west of Highway 89 and Silver Saddle, Hutcheson Acres, McCann Estates all of the Timberline communities including, Little Elden Springs, Black Bill Park, Wupatki Trails and Pine Mountain Estates, West of Highway 89 from Railhead north to Townsend-Winona, including the KOA Campground, Christmas Tree Estates and the U.S. Forest Service Peaks Ranger Station Office.

The remainder of the city has been placed in the "Ready" stage.

People are also encouraged to sign-up for emergency notifications for evacuations and other notices at coconino.az.gov/ready.

Drones of any kind are prohibited from flying over the area. When an unidentified aircraft, manned or unmanned, is sighted in the fire area, all air operations must shut down immediately. This poses significant risk to fire personnel and suspends crucial air suppression tactics.

Coconino County has issued an evacuation notice for communities along Schultz Pass and Elden Lookout Road as of 3:20 p.m. Monday, placing these neighborhoods in the “Go” stage.

Residents have until 6 p.m. to evacuate.

The declaration paves the way for Governor Doug Ducey to provide additional emergency state funding to help manage and fight the fire.

A similar state of emergency was declared last year in response to record rainfall that caused substantial flooding in parts of Coconino County.

According to local officials, Ducey is being kept informed of the situation and is looking to make additional money available as soon as a state of emergency is declared.

In a statement posted to social media, Mayor Evans also asked that Flagstaff residents remain calm as they listen and follow the directions of emergency personnel.

The Museum Fire has been downgraded from 1,000 acres to 800 acres, according to the most recent incident overview on Inciweb.

The news comes as the National Weather Service has issued a flash flood warning for parts of Coconino County. The warning will last from 5 p.m. until 7:45 p.m. The thunderstorm is producing heavy rain across the highline fire scar. and up to one inch of rain has already fallen. Flash flooding is expected to begin shortly.

Some locations that may experience flooding include Mead Ranch, Whispering Pines and Water Wheel Burn at Houston Mesa Road north.

According to the Inciweb's Museum Fire page, the total acres burned is now at 1,800. The earlier reduction from 1,000 to 800 acres was due to a typo posted on the official fire website at 5:25 p.m.

Joel Barnett, the spokesperson for the Southwest Incident Management Team Two, said the fire was at 1,000 acres as of last evening. The fire grew about 800 acres in roughly 24 hours and now has 600 personnel working on the blaze.

No flights will be made during the night; they will resume at daybreak tomorrow. Overnight, the team's plan will be indirect suppression on ground.

“This is going to be a 100% suppression effort. The team has come in and we are getting up to speed. Community and public firefighter safety are our No. 1 priority," Barnett said.

Coconino County reported late Monday night scam calls were being made to residents to evacuate their homes. The Coconino County Sheriff's Office confirmed they are not calling anyone to evacuate, other than Monday's previous evacuation for Elden Lookout Road and Schultz Pass. Please report these scam calls to 774-4523, the sheriff's non-emergency phone number.

The Latest information from Tuesday will be included on our updating article that can be found here.

Museum Fire Collection: A compilation of links to all Daily Sun's fire coverage

Gallery: Photos of the Museum Fire

The Museum Fire started just north of Flagstaff around 11 a.m. Sunday and quickly expanded to 400 acres as of 4:30 p.m.

Coconino County has issued several pre-evacuation notices in response to the Museum Fire that has burned over 400 acres in Flagstaff's Dry Lake Hills area on Sunday, July 21.

Updated July 30: The park is now reopened, however the trails behind the park are still closed.

Coconino County and fire emergency officials have been using the terms "Ready," "Set," "Go" to indicate how prepared communities should be ahe…

As fire personnel battle the Museum Fire on the forests of the San Francisco Peaks, weather forecasters are concerned with how their forecast …

How the public can respond to the Museum Fire

Though the Coconino National Forest last reported 600 total personnel working to control the Museum Fire, the public can still chip in to help…

The Southwest Area Incident Management Team #2, led by Incident Commander Rich Nieto, will be taking over management of the Museum Fire near F…

The Latest post will be updated throughout the day as more information becomes available. Please refer to the bottom of the article for the mo… 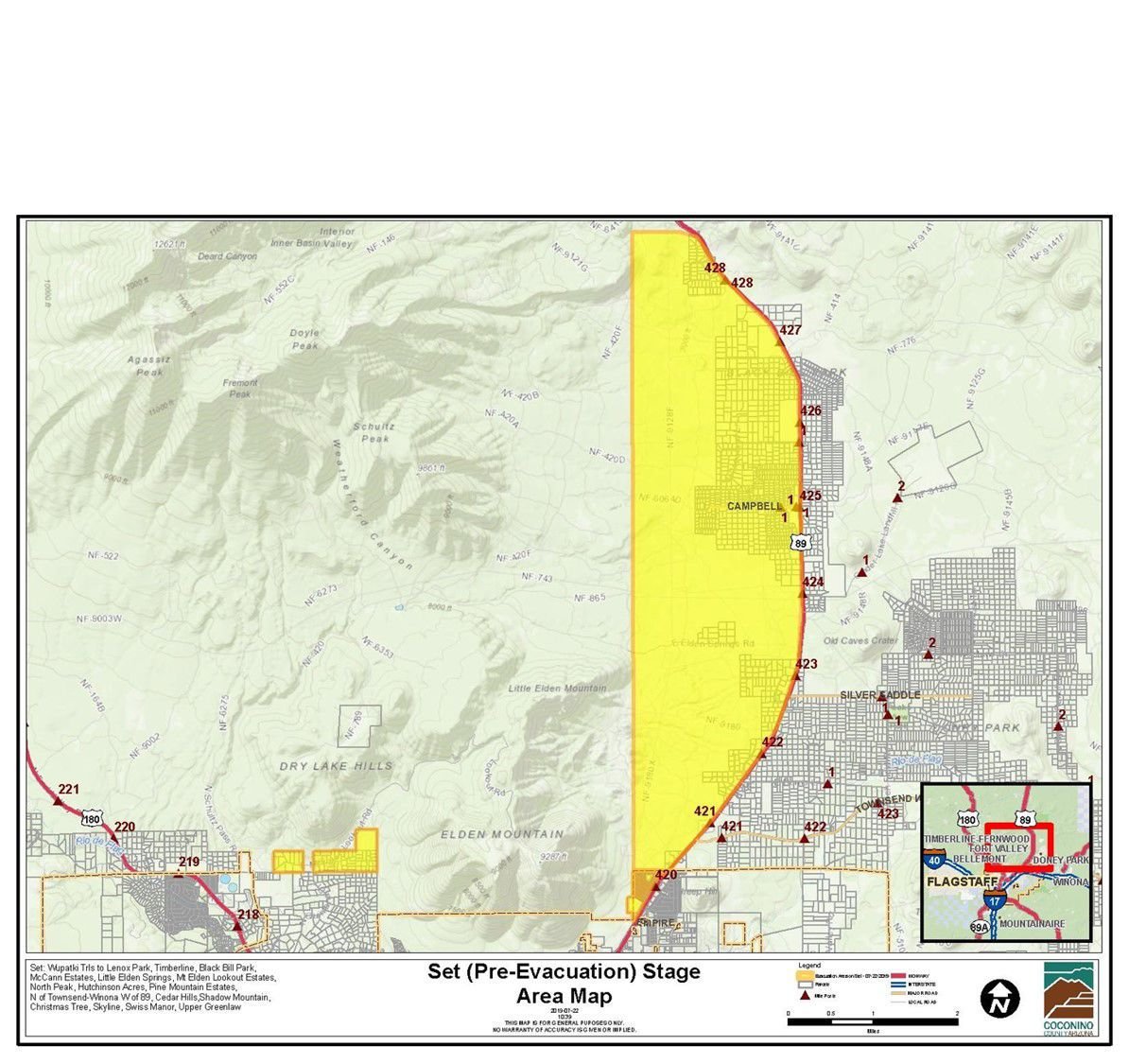 As of late Monday morning, the following areas and neighborhoods have been added to the “Set” stage: W of Hwy of 89 from Railhead north to Townsend-Winona, including the KOA, Christmas Tree Estates and the U.S. Forest Service Peaks Ranger Station Office.