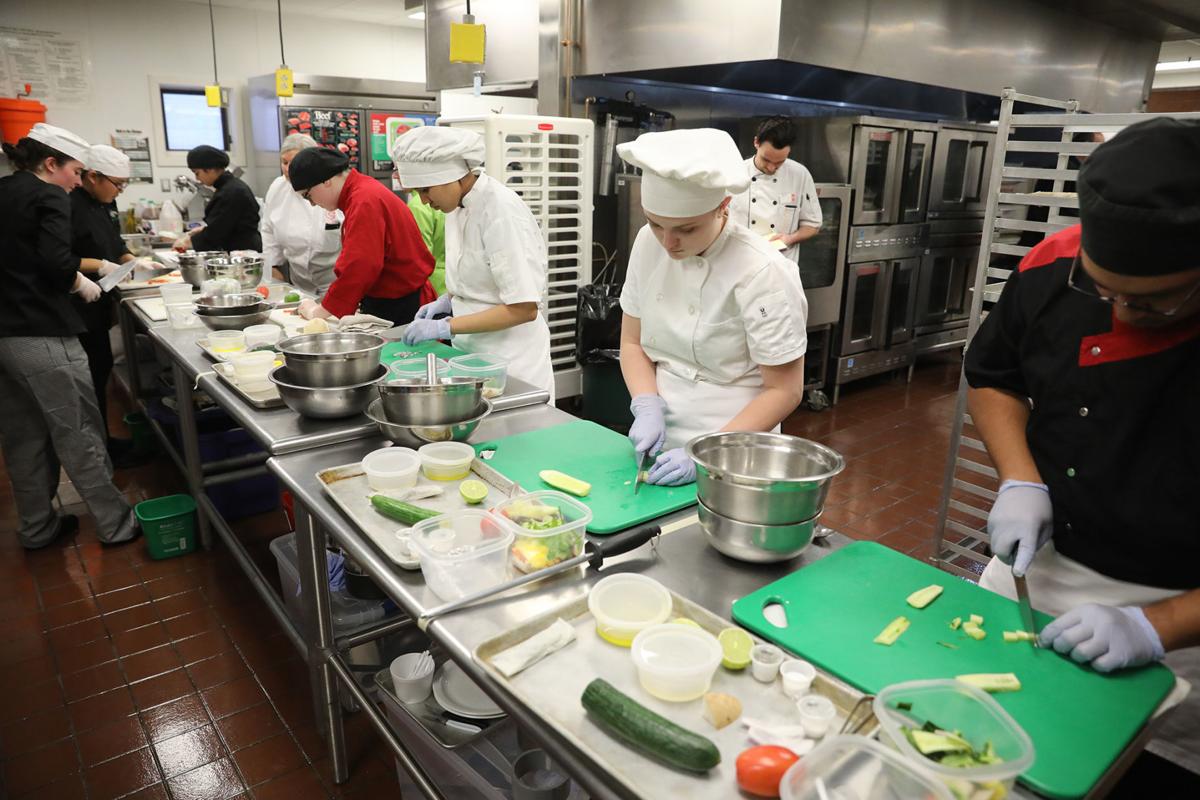 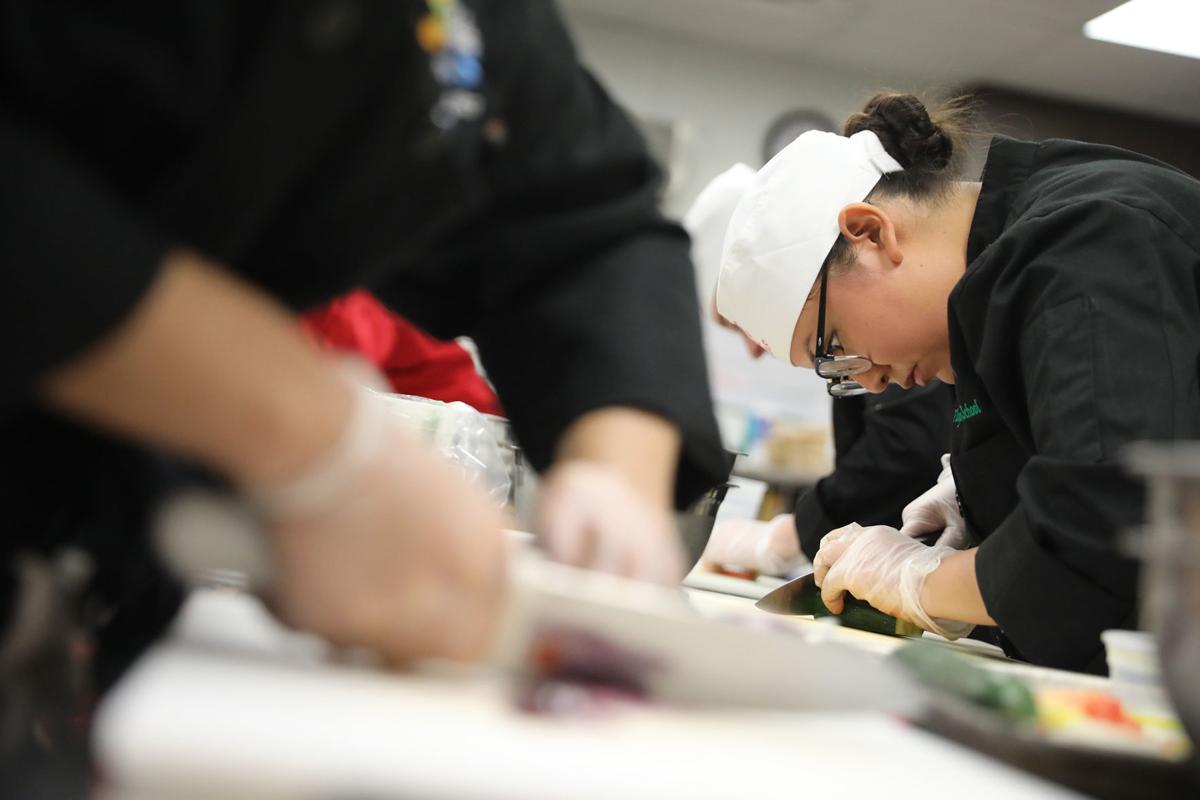 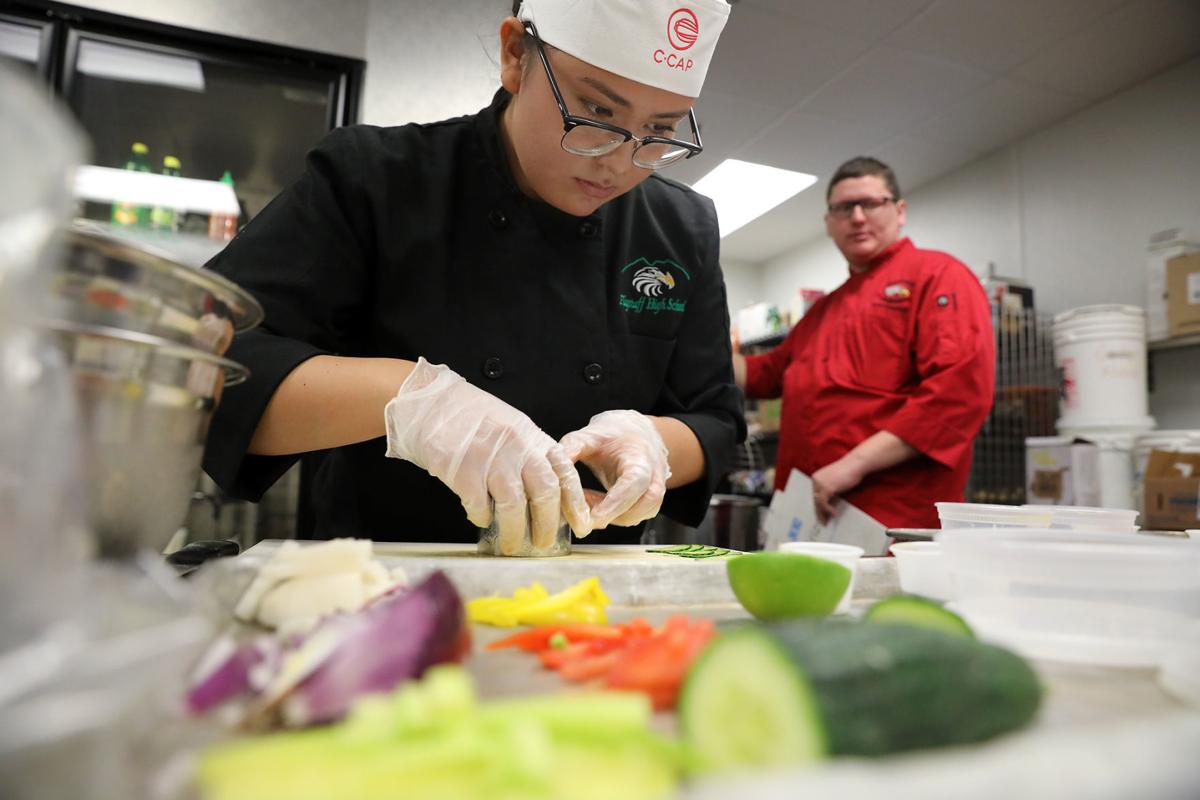 Aurora Smith, 17, focuses on the steps needed to assemble a standing C-CAP salad Monday morning as one of the judges watches. 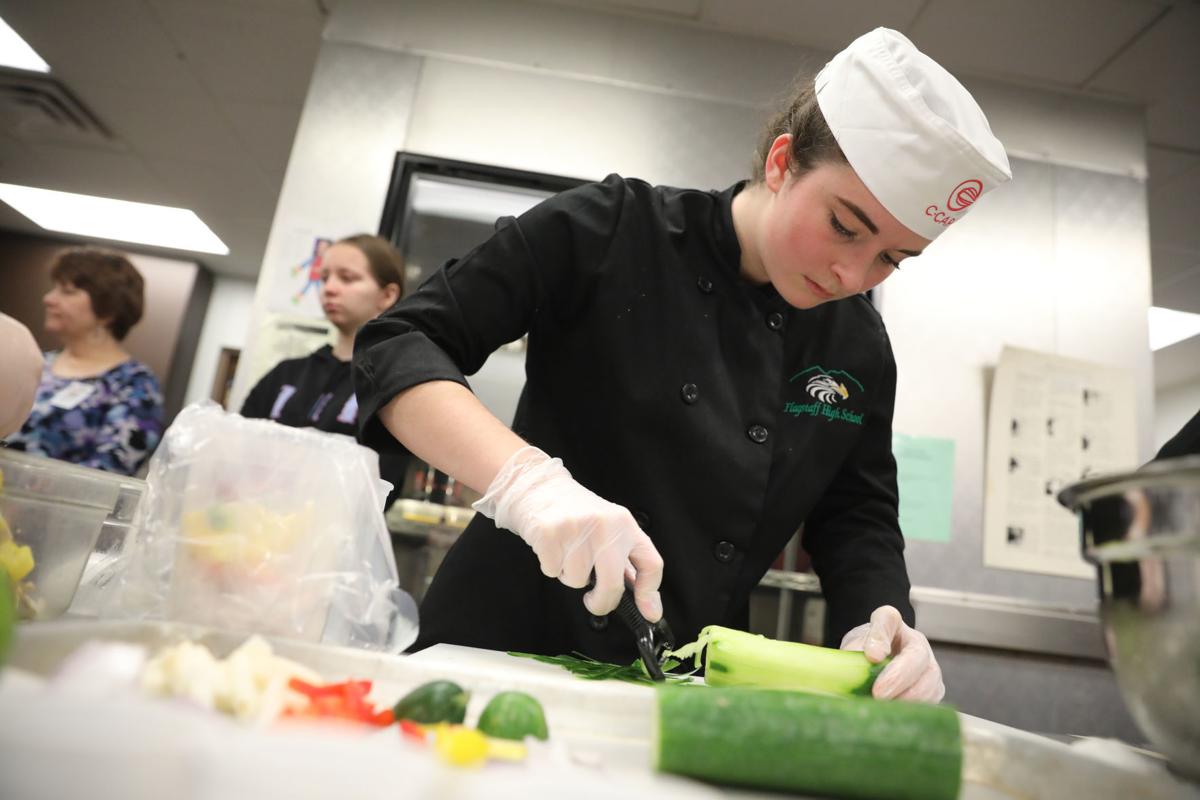 Haley Marlow, 17, takes the skin off a cucumber Monday morning during a mock culinary competition at Flagstaff High School. 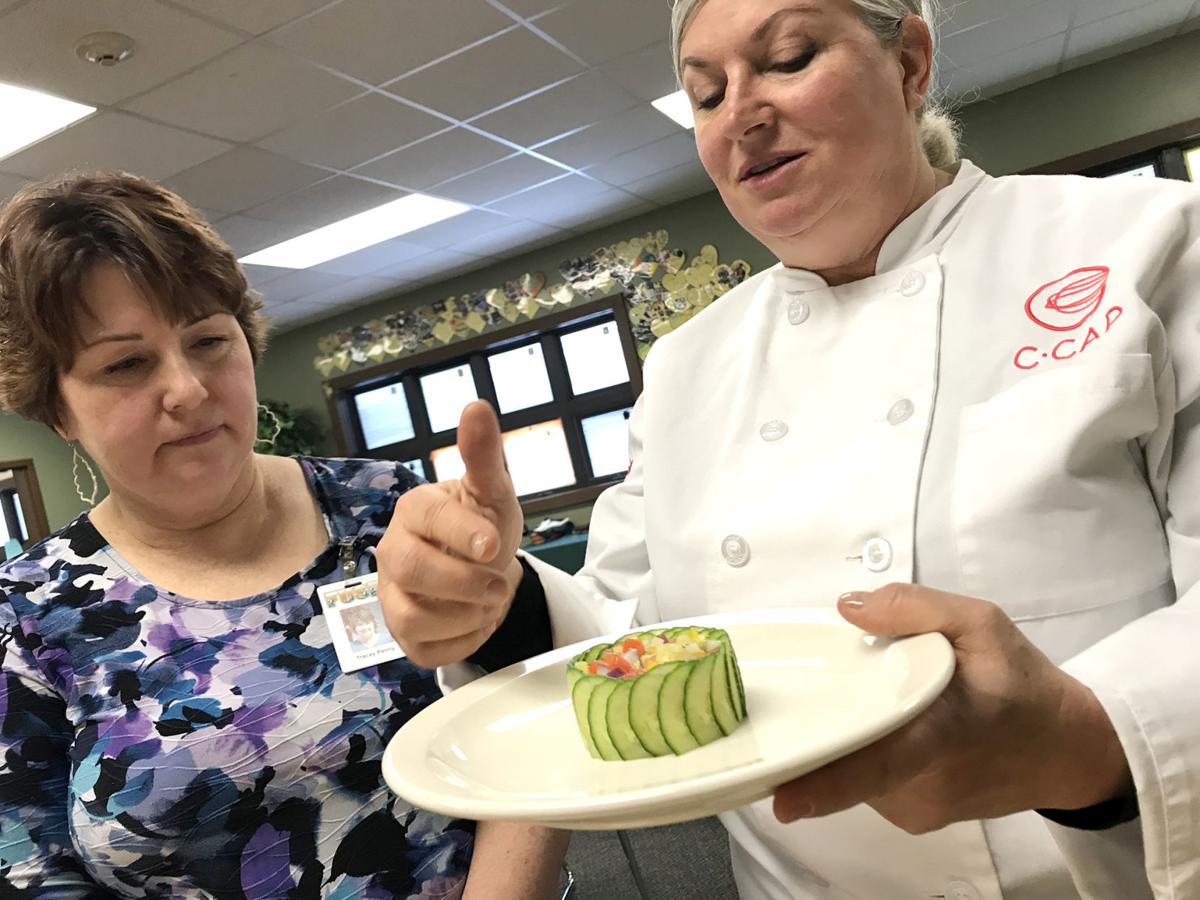 Jill Smith, program director for the Careers through Culinary Arts Program Arizona, right, explains to Tracey Penney, left, what she is looking for in a perfect C-CAP standing salad Monday morning during a mock culinary contest at Flagstaff High School. 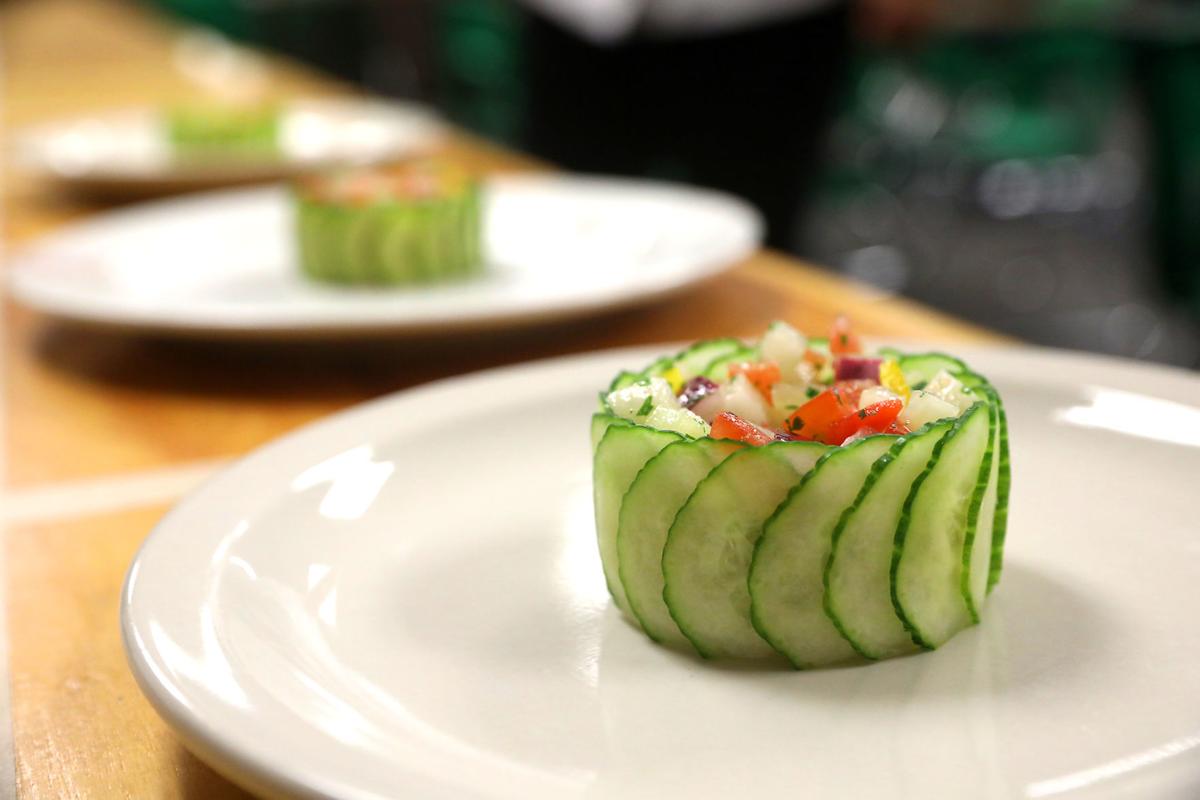 A finished standing C-CAP salad sits on a plate to be judged Monday morning during a culinary arts program competition for students from across Northern Arizona at Flagstaff High School. 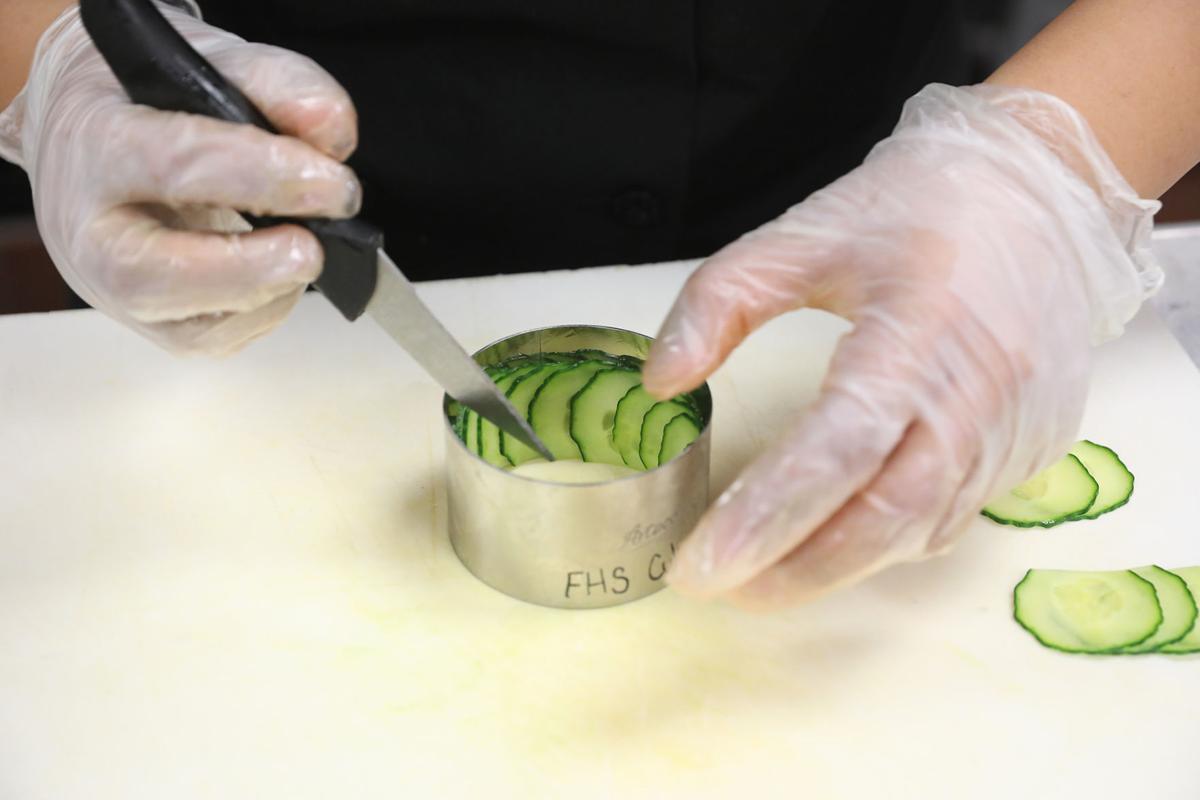 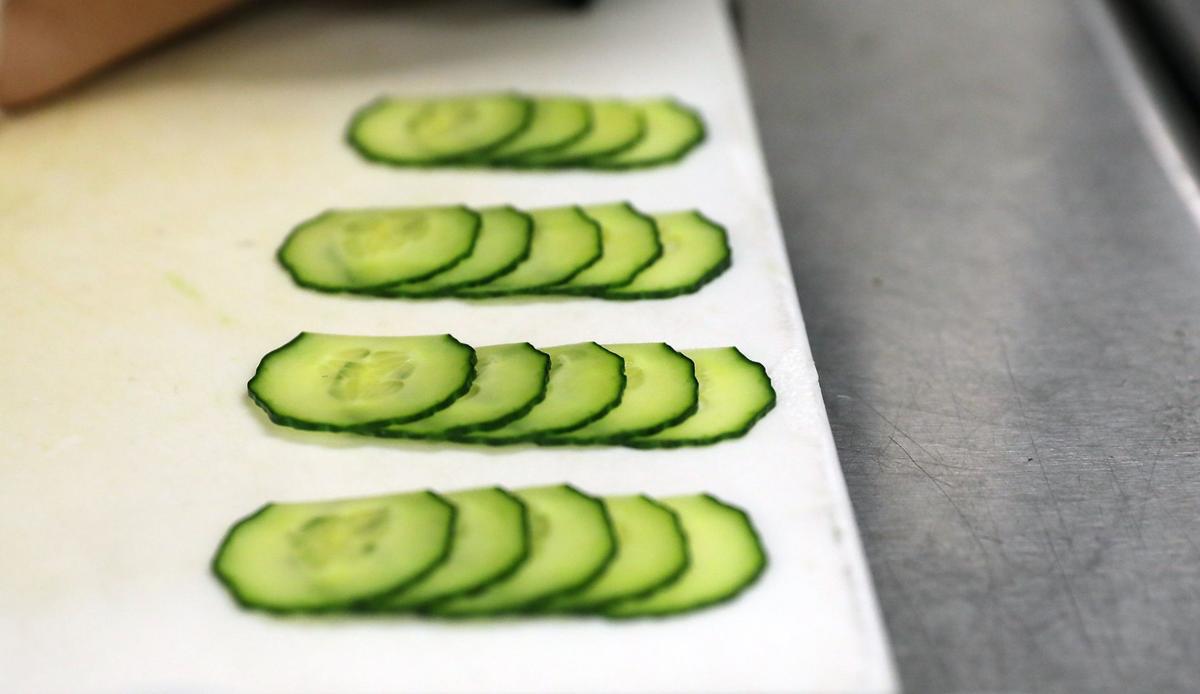 Slices of precisely cut cucumber wait to be assembled to hold together a C-CAP standing salad Monday morning during a mock culinary competition at Flagstaff High School.

That is the motto Chinle High School’s Rex Sherry recited to his culinary students before they began a mock competition at Flagstaff High School Monday morning.

High school students from Chinle, Coconino, FHS, Ganado and Ironwood gathered in the FHS kitchen to test their culinary skills prior to the Careers Through Culinary Arts Program (C-CAP) competition next month. The competition awards postsecondary scholarships valued from $1,000 to $120,000 to high school seniors based on their holistic culinary skills, including set up, cleanliness, product knowledge, time management and uniform, as well as an essay submitted in early December.

The funds can be applied to any postsecondary program in the food and hospitality industry, including hotel and restaurant management as well as nutrition.

Jill Smith, program director for C-CAP in Arizona, said the competition accounts for more than the results of a single taste test.

“There are more points in the kitchen than on the final plate,” she said. “It’s not just about skills at the moment. In a kitchen, no matter your skill level, there’s a job for you.”

Next month, three heats of approximately 40 students from more than 100 schools will compete in the preliminaries, where 14 judges will evaluate students from the time they walk in the room to the tasting, taking note even of their ability to hold a conversation while working. Thirty seniors will progress to the finals in March to compete for scholarships that vary based on skill, grade point average and a student’s preferred postsecondary institution. Juniors are able to compete for recognition; however, they are ineligible for the scholarships until next year.

For the mock competition, students had two hours and three feet of usable counter space to create the C-CAP salad – a molded cucumber salad with an emulsified dressing – and two French omelets, one for presentation and a second for local chefs to taste.

Although the students chatted happily as they set up their workstations, the moment the timer started, only the hollow sound of knives hitting cutting boards could be heard.

It was clear the students understood the value of this trial run as an opportunity for instant feedback from real chefs and a C-CAP official, Smith, who reminded them of the importance of bringing all needed equipment to the real competition, having a clean presentation plate, changing gloves frequently to prevent cross-contamination and categorizing discarded materials as composts, plastics or usable scraps. She also provided helpful tips for the young chefs.

“If you have a six-inch omelet pan, measured from rim to rim, then you should be using two eggs. It gives a nice, fatter, fluffier, better looking omelet. If you just put two eggs in [an eight-inch pan], you still might make a great omelet, but it’s going to look flatter and not as appealing,” she told students just before starting the timer.

Students from Ironwood High School made the two-hour trip to Flagstaff just to receive such feedback.

Matthew Langenbach, a graduate of NAU’s HRM program, has been teaching at Ironwood for two years. He said C-CAP is a valuable means to combat the severe shortage of chefs in Arizona because it provides students the experience and connections needed to succeed in the restaurant industry.

“The more work you do now, the easier the journey’s going to be,” he said.

Arizona C-CAP, a 27-year-old program, is the only statewide C-CAP region, Smith said. Other programs are limited to urban areas like Washington D.C., Chicago and Los Angeles. Although students from all over the state compete for these scholarships, northern Arizona never fails to have its students qualify for the finals – and receive scholarships.

Patti Pastor, culinary arts teacher at FHS and former co-owner of Roma Pizza, said in the 13 years she has been teaching, her students have received more than $400,000 in scholarships through C-CAP, an expanding network she describes as a family.

Smith explained that high school graduates entering the industry will be mentored by professional chefs throughout the state, who often ask for C-CAP students specifically. Today, former C-CAP students are working at some of the most notable companies and restaurants throughout the world, she said. In Flagstaff, this includes SoSoBa, Brix, Tinderbox Kitchen and the Cottage.

To prepare for these hospitality careers, culinary students at FHS meet in class every day and often prepare full meals – including an entrée, drink and dessert – which are then sold to faculty members for lunch. Preparing for the C-CAP competition takes months of additional after-school practices.

Aurora Smith, 17, is one of Pastor’s Culinary III students and the only FHS senior to compete this year, for her first time. She said she enjoys the tradition of her family’s cooking as much as she does learning how to prepare new things in class, which is challenging, but worth it.

Her advice for other students is not to take critiques too seriously because of the freedom cooking provides.

“Don’t let their words hurt you. Learn from your mistakes,” she said. “Things aren’t always done the same way.”

Aurora said her plans for next year are to attend either Northern Arizona University or New Mexico State University for their Hotel and Restaurant Management (HRM) programs. Later, she hopes to be accepted to the Navajo Technical University for its culinary arts program.

Kevin Vargas, 17, a senior at Coconino, will also be competing for the first time this year. While he chopped vegetables for his salad, he said his favorite part of cooking has been learning how to salvage older ingredients to make something new.

For Chloe Yoe, a 16-year-old junior at Chinle, the most useful part of her culinary class has been learning how to hold a knife properly, she said. She also mentioned she loves cooking for its smells.

Although competing can be nerve-wracking, students who may be interested in any aspect of the industry are encouraged to not only join their school’s culinary program, but also to participate in competitions like these – no matter their skill level – because of the opportunities they can provide for students with diverse postsecondary plans.

After all, the culinary arts are about more than just properly wielding kitchen utensils.

“You need to love people and be disciplined and organized, as well has have communication and listening skills,” Pastor said. “Anything else you can learn.”

Even second- and third-graders can help others in their times of need.

"Only One You:" Thomas Elementary students create art based on local children's book

In 2006, Linda Kranz, a local children’s book author and illustrator, released her book "Only One You"; in September of this year, students at…

“My father always taught his children you can do anything for one year,” said Patti Pastor, culinary teacher at Flagstaff High School.

Aurora Smith, 17, focuses on the steps needed to assemble a standing C-CAP salad Monday morning as one of the judges watches.

Haley Marlow, 17, takes the skin off a cucumber Monday morning during a mock culinary competition at Flagstaff High School.

Jill Smith, program director for the Careers through Culinary Arts Program Arizona, right, explains to Tracey Penney, left, what she is looking for in a perfect C-CAP standing salad Monday morning during a mock culinary contest at Flagstaff High School.

A finished standing C-CAP salad sits on a plate to be judged Monday morning during a culinary arts program competition for students from across Northern Arizona at Flagstaff High School.

Slices of precisely cut cucumber wait to be assembled to hold together a C-CAP standing salad Monday morning during a mock culinary competition at Flagstaff High School.