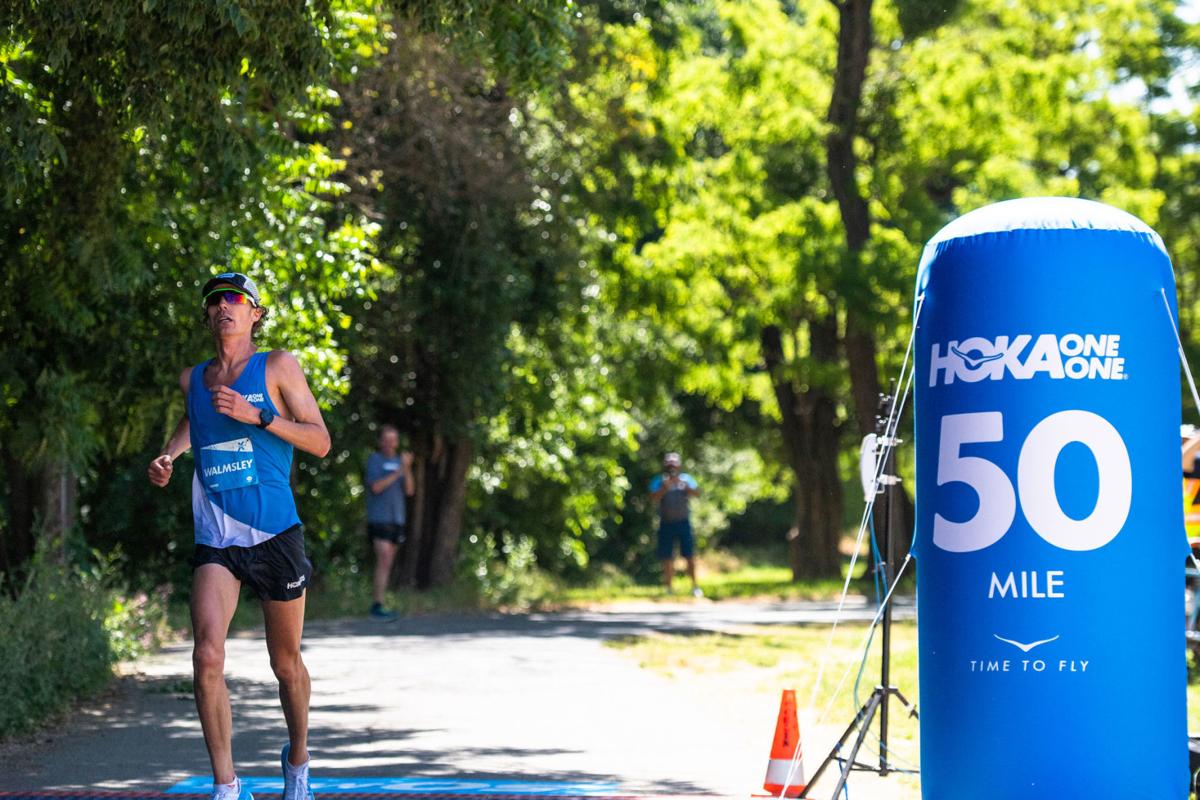 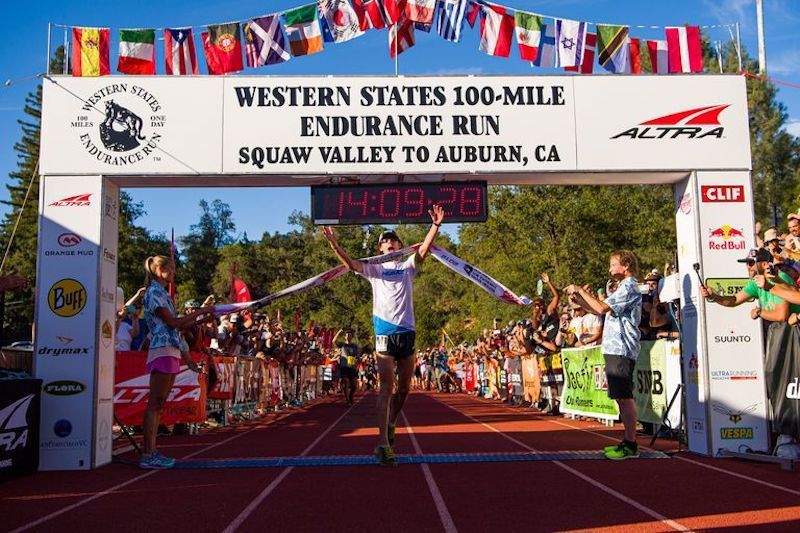 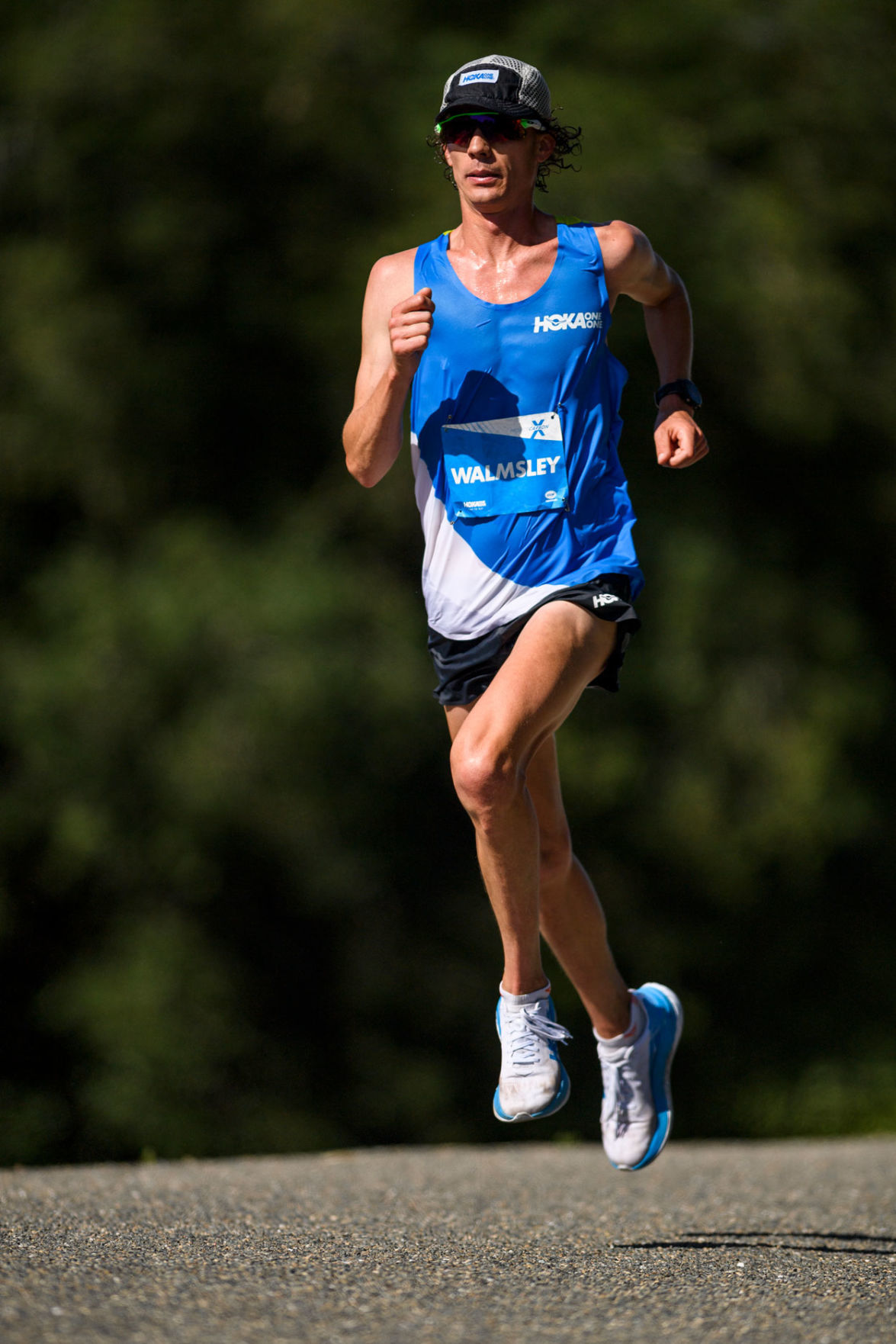 Ultrarunner Jim Walmsley has started training on the roads for the U.S. Olympic Marathon Trials. 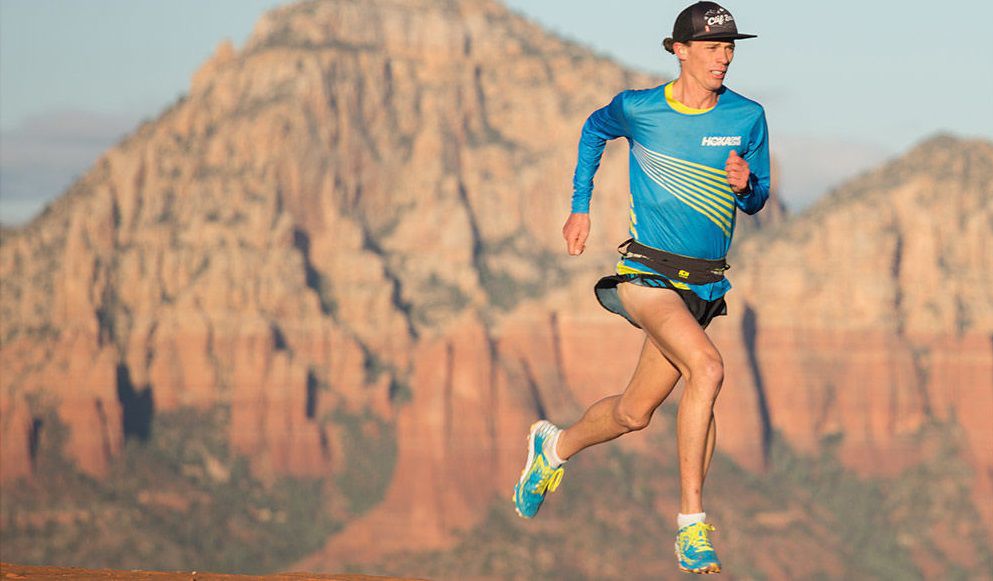 Champion ultrarunner Jim Walmsley is most at home on the trails, particularly the Grand Canyon, but he's been training on the roads for next month's U.S. Olympic Marathon Trials. 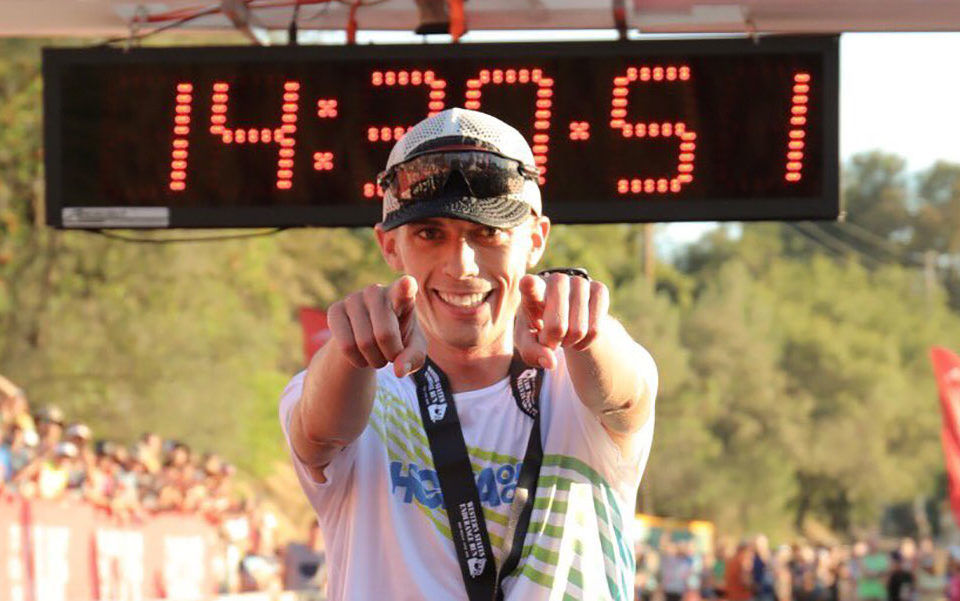 In 2018, Jim Walmsley won the first of two straight Western States 100 titles. He now is training for the U.S. Olympic Marathon Trails.

He never broke eye contact, not once. The look in his brown eyes was almost bovine in its earnestness, nary a trace of guile in his mien, an absence of posturing and nothing close to the arrogance that others have assigned to him.

No, Jim Walmsley, hands warming on a coffee cup at the Kickstand Kafe near his Flagstaff home, was nothing if not honest and sincere about his chances in next month’s U.S. Olympic Marathon Trials.

“I’d say I’m not in contention for the top three,” he said. “The goal, more or less, is to be competitive and try to hold my own. … At the end of the day, I still have ultrarunning. I still have my day job.”

Then he averted his gaze and smiled.

“But you never know,” he added. “I bring something to this race, a toolbox, others don’t. The race could turn out like, ‘Well, I’m the only one who brought this wrench. I can do that.’ You never know.”

Walmsley, one of the world’s top ultrarunners who has won many prestigious races and set the course record, twice, at the Western States 100, is attempting something that many think near-impossible, or at least foolhardy. He is going down in distance, off the mountain and onto the roads, to challenge the country’s best marathoners on Feb. 29 in Atlanta.

Some call it an act of hubris by the “ultra guy,” the interloper from the trails who thinks that he can just jump into the Olympic Trials on something of a whim. He does not need to be told that his chances of qualifying for the Tokyo Olympics are remote. Online haters, of which there are legion on websites such as Letsrun.com, are not shy in their scornful dismissal of the attempt as not just quixotic but an affront to the so-called purity of the marathon by this ultrarunning outsider.

And yet, there are equally as many out there who are just as passionate about pulling for Walmsley, reveling in Walmsley’s persona as the blue-collar ultrarunner and iconoclast who breaks all the norms of elite marathon running — insanely high mileage (up to 175 miles per week); minimal speed work and tapering — and just might throw down a breakout performance in what, incredibly, will be his first marathon ever.

For an athlete who thinks nothing of pounding out 30-mile training runs in the Grand Canyon, and who last spring set the world 50-mile record at 4 hours, 50 minutes, 8 seconds (5:48 per mile), the marathon distance is hardly daunting. The competition, and the sub-5-minute mile splits, is another matter altogether.

But Walmsley is just the kind of free spirit who is willing to give it a whirl – and do it on his terms. He did have to qualify for the trials, of course, and did so last year with a time of 1:04 in the Houston Half Marathon. That was Walmsley’s first half marathon since his school days in Phoenix, and after barely meeting the standard, he went back to his ultra dominance and only recently started mixing in some marathon speed training into his monster volume of miles.

Today, he’ll compete in the Arizona Rock 'n’ Roll Half Marathon in Phoenix against other trials hopefuls, including NAZ Elite’s Scott Fauble and Sid Vaughn. It should be a good barometer of Walmsley’s speed and fitness seven weeks out from Atlanta, and he hopes to dip into 63-minute territory in what he calls a “workout,” not an all-out goal race.

Ask Walmsley his motivation for his Olympic Trials quest, and he gives that same intense, unblinking stare. The stare is even more disarming because Walmsley's angular face and razor-high cheekbones give him a lean, hungry look.

Turning 30 this week, could this be considered a mid-career crisis for him? Hardly. Rather, Walmsley says he’s always up for a challenge — whether it be setting a Grand Canyon Rim-to-Rim-to-Rim record, which he did in 2016, or in winning the World Mountain Running title last November in Argentina — the harder the better.

And if it tweaks the running establishment, so much the better.

“For an ultrarunner, (the marathon trails) challenges the status quo for how we are stereotyped,” he said. “Just challenging that and putting up a good fight, that sort of thing, is more or less the bigger story that I’m after by doing this.”

Among elite road racers, there is a perception of ultrarunners as somehow a lesser species, because their times are slower due to the massive amount of climbing they do and because they believe the level of competition is inferior. They look at Walmsley’s high mileage, late start to speed intervals (early January) and the fact he does not have a coach writing workouts for him as proving they he is a mere marathon dilettante.

“Yeah, I read some of the remarks,” Walmsley said, “People are either 100 against me or 100 percent for me. A lot dismiss ultra (runners) as not having any leg speed. And when I’m training for ultras, they’re right. Yeah, I just can’t hop in a workout with a marathon group or shorter (distance runners) because I’ll get dusted.”

This isn’t some whim, though. Walmsley is purposeful in his approach. He concedes he’s “cramming” in speed work, but he also has embraced the Japanese marathon-training approach of high mileage volume with speed intervals added, as well as the Norwegian approach of doing twice-daily workouts.

Walmsley posts all of it for anyone to see on the social media running site Strava. In the five weeks leading up to the Arizona Rock n Roll Half, Walmsley averaged 161 miles a week, including two weeks logging 175 miles each. That’s a jaw-dropping amount of volume. But observers were equally aghast when they saw that, once he started speed work, he did a set of 200-meter repeats in the morning, then 12-by-400 meters with a minute’s rest in the afternoon. On another recent day in Sedona, he did six mile repeats starting at 4:49 and finishing at 4:39.

“There’s just an unknown about it, whether the strength from running trails and the high volume I do now will translate to something that’s maybe closer to my top potential for the marathon,” Walmsley said. “With the hills in Atlanta, there’s no certain time that’s going to get you there to the top three. People aren’t sure what it’s going to take, so why not put your nose in that?”

Walmsley revels in “putting his nose” into races. He’s done that ever since moving to Flagstaff in 2015 to dedicate himself to trail running and jump-start his life. His never-back-down ethos has resulted in several major triumphs – and also a few spectacular failures. But it just shows he’s unafraid to put himself out there.

At 30, life seems settled now. He recently bought a home in Flagstaff after renting for four years. He has a steady girlfriend and a lucrative sponsorship portfolio from HOKA ONE ONE and Clif Bar, among others. He’s proven himself at Western States, and other big races, and after the Trials will compete at South Africa’s storied Comrades ultra marathon and try once more to win the Ultra du Mont Blanc in France, which has twice eluded him.

It’s a far cry from the Walmsley who showed up in Flagstaff sort of at loose ends. He had been given a general discharge from the Air Force — he was stationed at a missile silo facility in Montana — in the wake of a DUI and being caught up in a base-wide test cheating scandal. He admitted to being depressed and out of sorts.

Running became his therapy, his way forward. As the former captain of the Air Force track and cross country teams, who logged impressive times but won no NCAA titles, Walmsley knew he had talent, and he enjoyed his forays running the trails in Montana.

So, like many post-collegiate runners, he migrated to Flagstaff’s high-elevation peaks to live and train. But he also had living expenses, so he worked at Absolute Bikes and started to build the mileage base that eventually would result in winning ultras and gaining that coveted HOKA contract.

Looking back at his early days in Flagstaff, Walmsley runs a hand through his wavy shoulder-length hair and laughs at how he knew little about mountain biking despite working at the store. He also speaks warmly about the connections he’s made in town with fellow ultrarunners, the self-dubbed Coconino Cowboys, which includes Western States runner-up Jared Hazen.

“The original plan was that I wanted to commit 5 years, until I was 30, work at the bike shop and use my spare time and spare money to just do trail running,” he said. “When I was not having a mentally good time in Montana, I found running was the best thing for me. I needed to make this priority in my life before I put my adult pants on and put a resume together or go back to school.”

Turns out, Walmsley’s career took off faster —and farther — than he expected. Now, he hopes to continue elite ultrarunning for perhaps another 10 years, with Flagstaff as his home base.

“I love Flagstaff,” he said. “I’ve even switched my phone over to a 928 number. I’ve always had a 480 number, and it it’s awkward in Flagstaff, a dead giveaway — that you’re from Phoenix, not just an outsider.”

In the Olympic Marathon Trials, however, Walmsley remains the outsider, the unknown quantity. He seems to like it that way.

Meet Walmsley and the Coconino Cowboys

Ultrarunner Jim Walmsley has started training on the roads for the U.S. Olympic Marathon Trials.

Champion ultrarunner Jim Walmsley is most at home on the trails, particularly the Grand Canyon, but he's been training on the roads for next month's U.S. Olympic Marathon Trials.

In 2018, Jim Walmsley won the first of two straight Western States 100 titles. He now is training for the U.S. Olympic Marathon Trails.