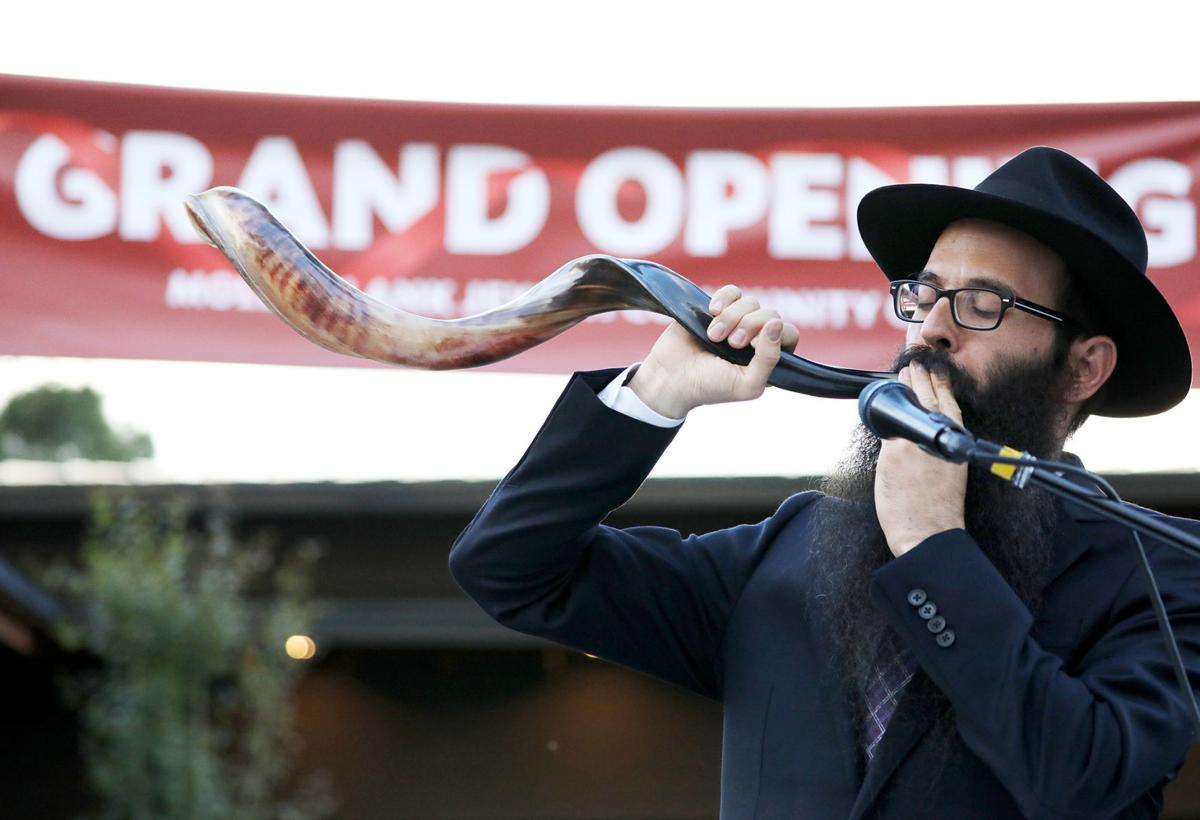 Rabbi Dovie Shapiro, co-director of the Chabad of Flagstaff, blows the Shofar Thursday night during the grand opening of the Molly Blank Jewish Community Center. 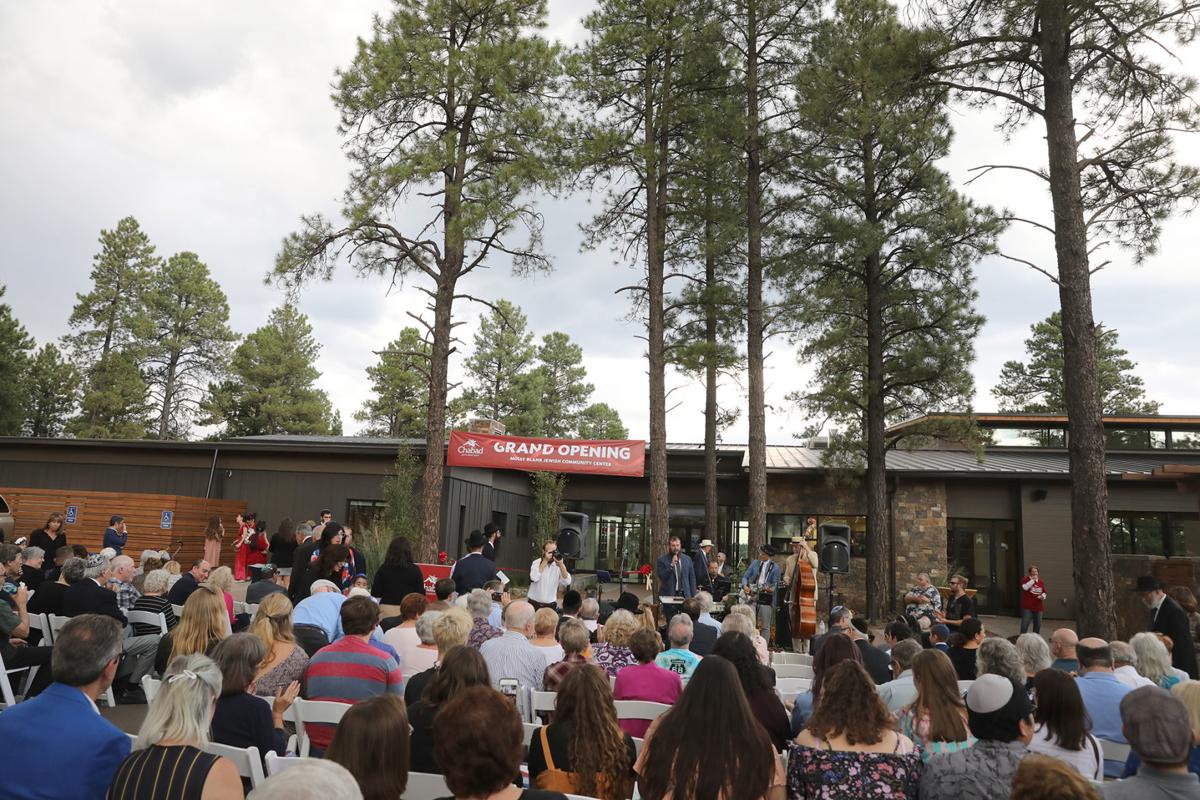 More than 100 people attended the ceremony as food and drinks were served to the smiling people of Flagstaff and the Jewish faith at 1254 W. University Ave. Chabad of Flagstaff has operated in the community since 2006 and broke ground on the property in 2017.

Scattered storm clouds crawled overhead as a few drops fell from the sky, but there were not enough to stall the celebration. Before its opening, children laughed and ran around the parking lot and in front of the podium as rabbis and public figures spoke of their dreams for the new center and the power of strong community. The red ribbon was tied behind the white podium between two Ponderosa Pine trees, and was later cut by Chabad leaders, family and financiers as onlookers watched and cheered.

When the ribbon fell, Chabad’s Rabbi Shmulik Moscowitz began singing and invited the community to enter as a four-piece band played in celebration. This marks the 20th synagogue for Chabad of Arizona with a congregation of more than 33 rabbis, according to Rabbi Zalman Levertov, regional director of Chabad of Arizona.

Chaya Shapiro, co-director of Chabad of Flagstaff, shared a story with the crowd of a snowy Flagstaff night, where a car accident helped her realize the importance of her future work at the center and through Chabad of Flagstaff. She described a goal to greet Jewish children, teens, students and community members to experience the joy of their Jewish heritage.

“We haven’t made enough of a difference, enough of an impact,” Chaya Shapiro said of her perspective at the time. “There’s still so much more to do and so many more lives to touch. I’m not done here yet. That is our bucket list. That is the purpose of the beautiful, new Molly Blank Jewish Community Center.”

The center was built to have as many different uses for the community as it has rooms. The two-story building with over 15 rooms is complete with a synagogue, mikvah, greeting room, children and university learning rooms, three overnight bunkrooms, a kitchen, and much more still expected for the future.

Chabad of Flagstaff hopes to continue to take advantage of opportunities for growth, including adding playground equipment, a sanctuary, gourmet kitchen and another bunkroom.

Rabbi Dovie Shapiro, co-director of Chabad of Flagstaff, also thanked the community for supporting them when the walls and windows of the under construction center were defaced with swastikas and other hate symbols in March. After the hate crime was discovered, Flagstaff citizens adorned the gates of the under-construction center with foil-covered hearts with words of compassion and support for Chabad of Flagstaff.

The Flagstaff Police Department has been investigating the hate crime and gained a lead based on evidence left at the scene in June, according to police records. However, the evidence did not lead to charges.

The case remains open and there have been no official suspects named.

Meanwhile, the walls and windows where the symbols were etched and painted were cleaned or built over. Now the center's doors are open and the hallways are lit. Dovie Shapiro had high praise for Flagstaff and its residents. He even likened Flagstaff to the city where the Chabad movement began in Russia.

“Flagstaff reminds me of the city of Lubavitch, a city of true love and respect for diversity,” Dovie Shapiro said. “We are blessed to be part of such a welcoming and special community.”

Arthur Blank was honored for being a large financier for the building, which was named in the memory of his mother Molly Blank. Arthur’s brother Michael Blank lives in Flagstaff, and the two brought their family to enjoy the grand opening of the center they named after their mother.

“Seeing her name on the building after all these years have been a real blessing for us, the whole family,” Michael Blank said.

Arthur Blank, a co-founder of The Home Depot and lives in Georgia where he is the owner of the Atlanta Falcons. The Arthur M. Blank Family Foundation donated more than $2 million to Chabad of Flagstaff in 2015, near the time of his mother’s death, according to the foundation’s website. Molly Blank died at the age of 99, but her impact spread beyond her family, now including Flagstaff.

A large picture of Molly Blank has been placed in the greeting room above a hearth and fireplace in her honor.

Arthur said his mother would have been happy, smiling and speaking with the people in the community if she were able to see the opening of the center for herself.

“The building itself is magnificent,” Arthur said to the Arizona Daily Sun. “It becomes truly magnificent when it’s people come here to learn, to get connected to each other — emotionally, spiritually, and regardless of what religion they may be — and learn what service means to others and how important that is in life.”

On Sunday, March 26 the Flagstaff Jewish community gathered for the groundbreaking of the Molly Blank Jewish Community Center and Chabad of Fl…

Designed to offer a light in the community, Chabad of Flagstaff’s Molly Blank Jewish Community Center suffered an attack against its mission t…

Chabad of Flagstaff is a communal organization that has been serving the needs of Flagstaff’s Jewish community, NAU students, tourists and oth…

Watch beluga whales return to sea after years of captivity

Watch beluga whales return to sea after years of captivity

Astronaut left his family photo on the moon

Astronaut left his family photo on the moon

Rabbi Dovie Shapiro, co-director of the Chabad of Flagstaff, blows the Shofar Thursday night during the grand opening of the Molly Blank Jewish Community Center. 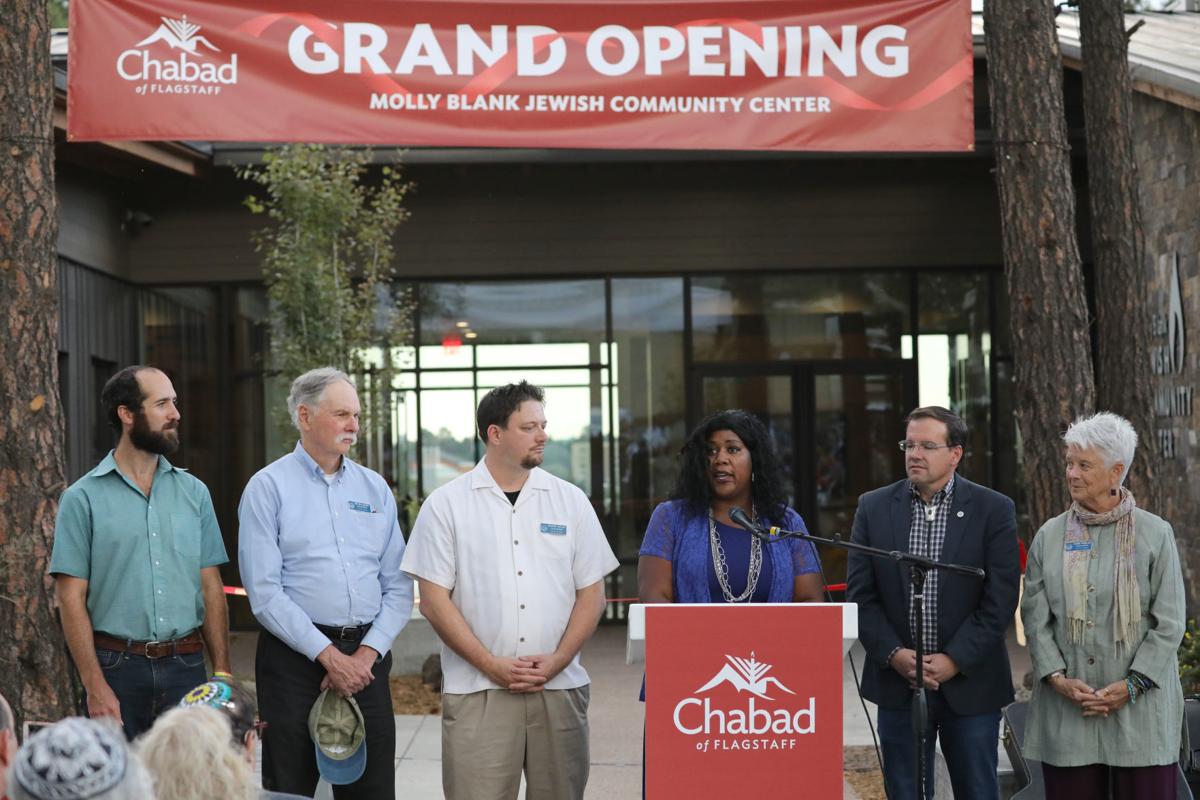 Flagstaff Mayor Coral Evans, surrounded by members of the city council, speaks during the grand opening of the Molly Blank Jewish Community Center Thursday night about the community support for the center. 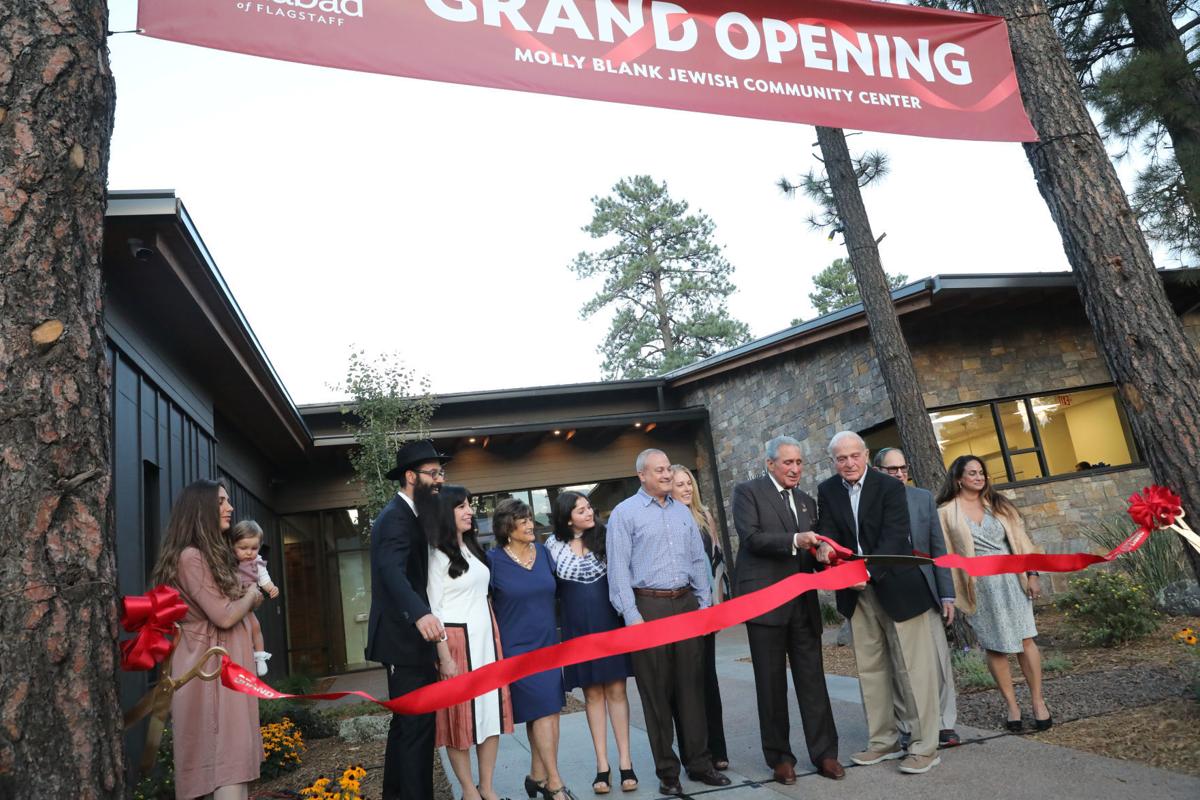 Arthur Blank, left, and his brother, Michael Blank, right, both hold a giant pair of scissors Thursday evening as they cut the ribbon to open the Molly Blank Jewish Community Center named in honor of their mother. 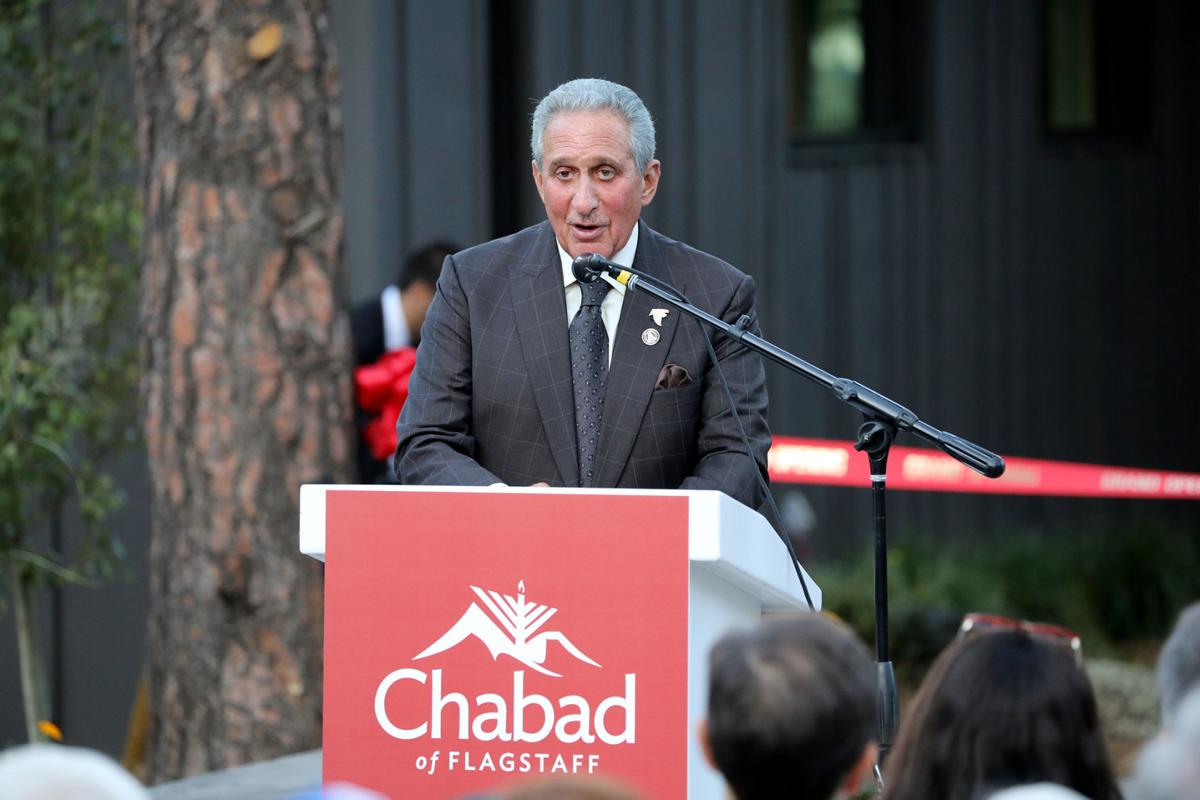 Arthur Blank, co-founder of The Home Depot and owner of the Atlanta Falcons football team, speaks Thursday night during the grand opening of the Molly Blank Jewish Community Center. 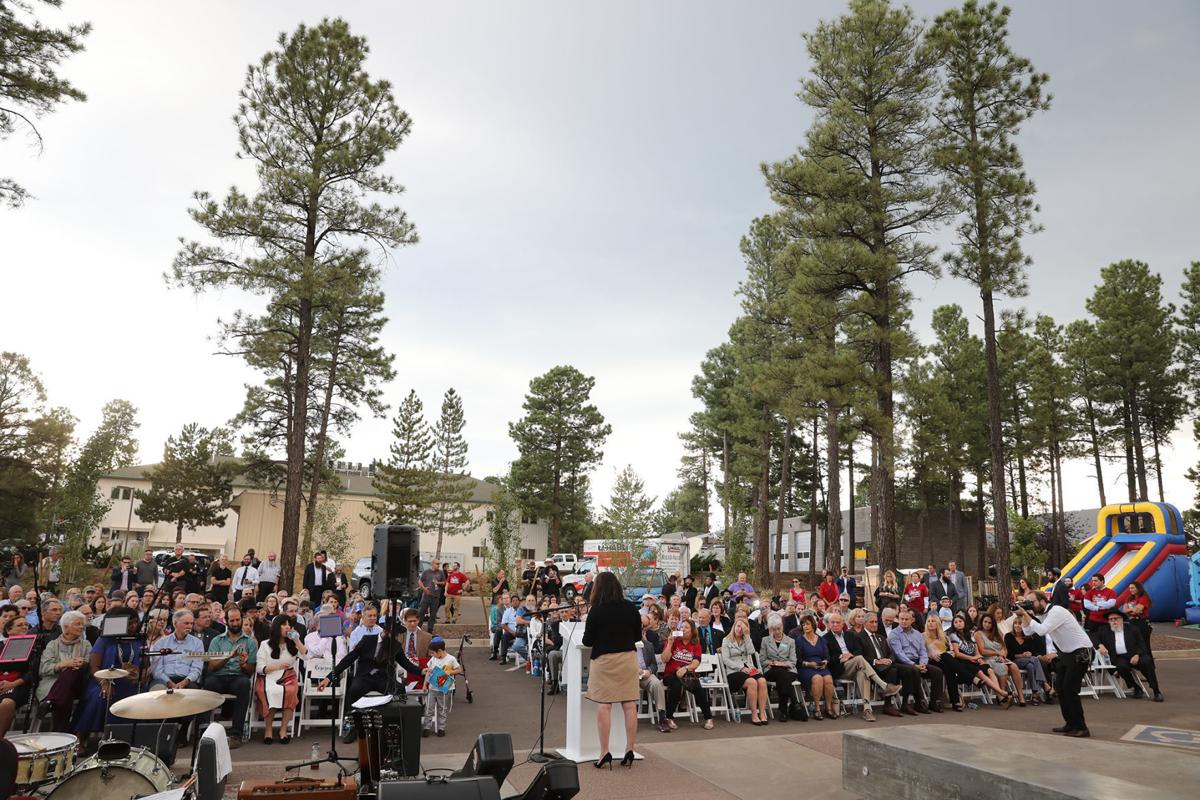 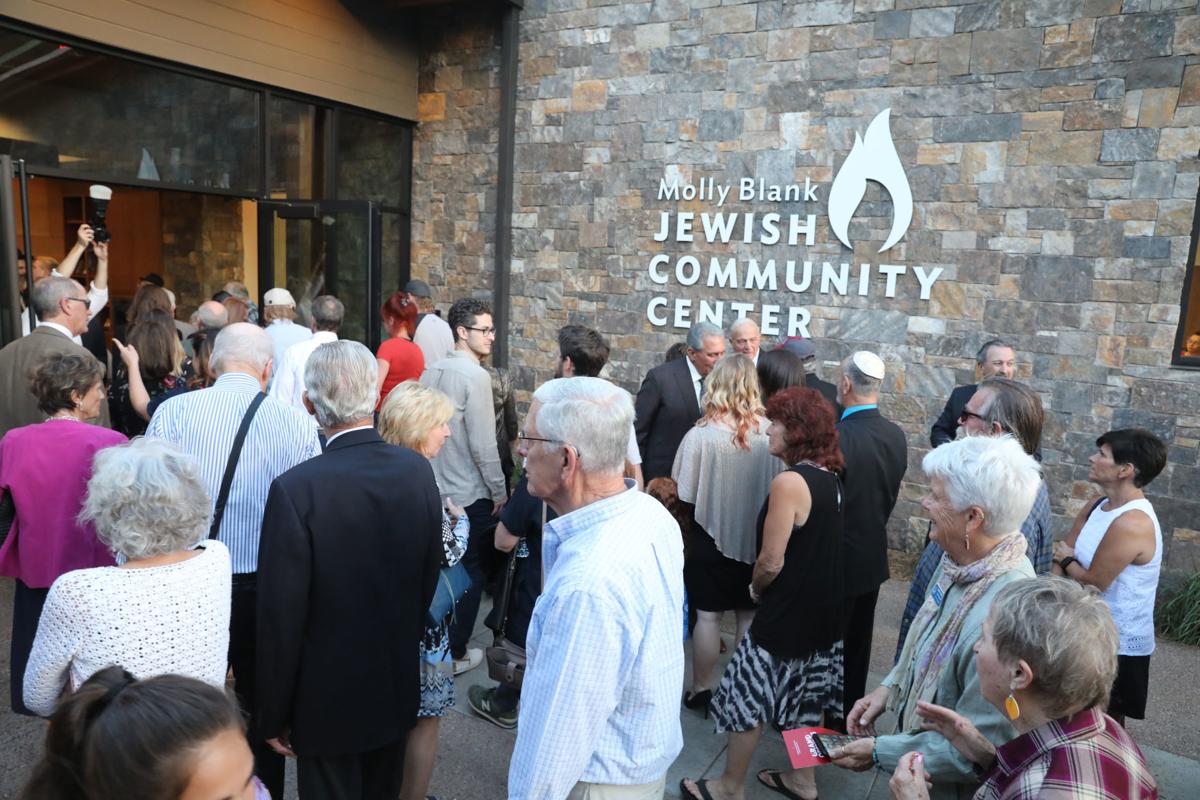