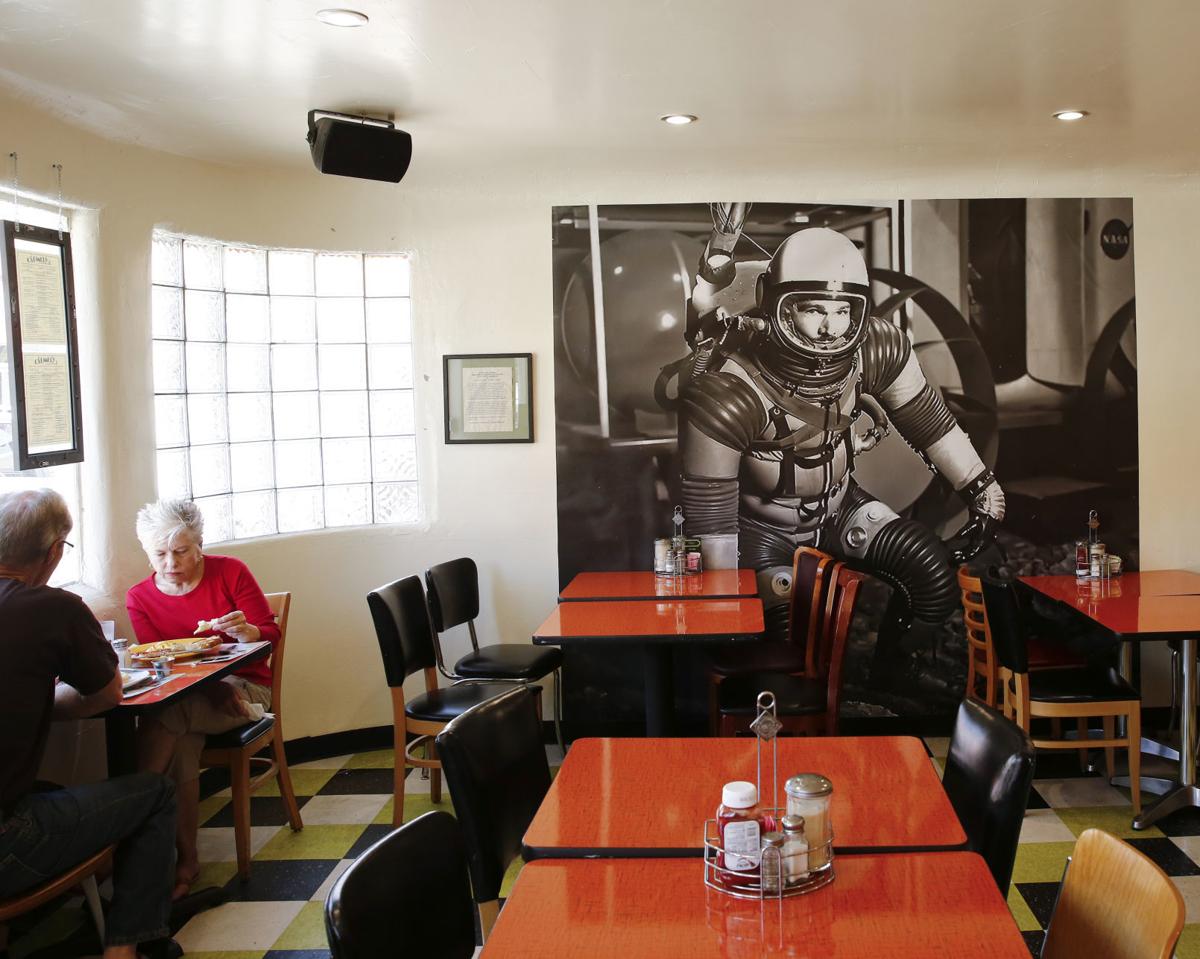 A large photograph of geologist Eugene Shoemaker in a test spacesuit hangs over the dining area at Carmels Flagstaff, a breakfast and lunch spot south of downtown. 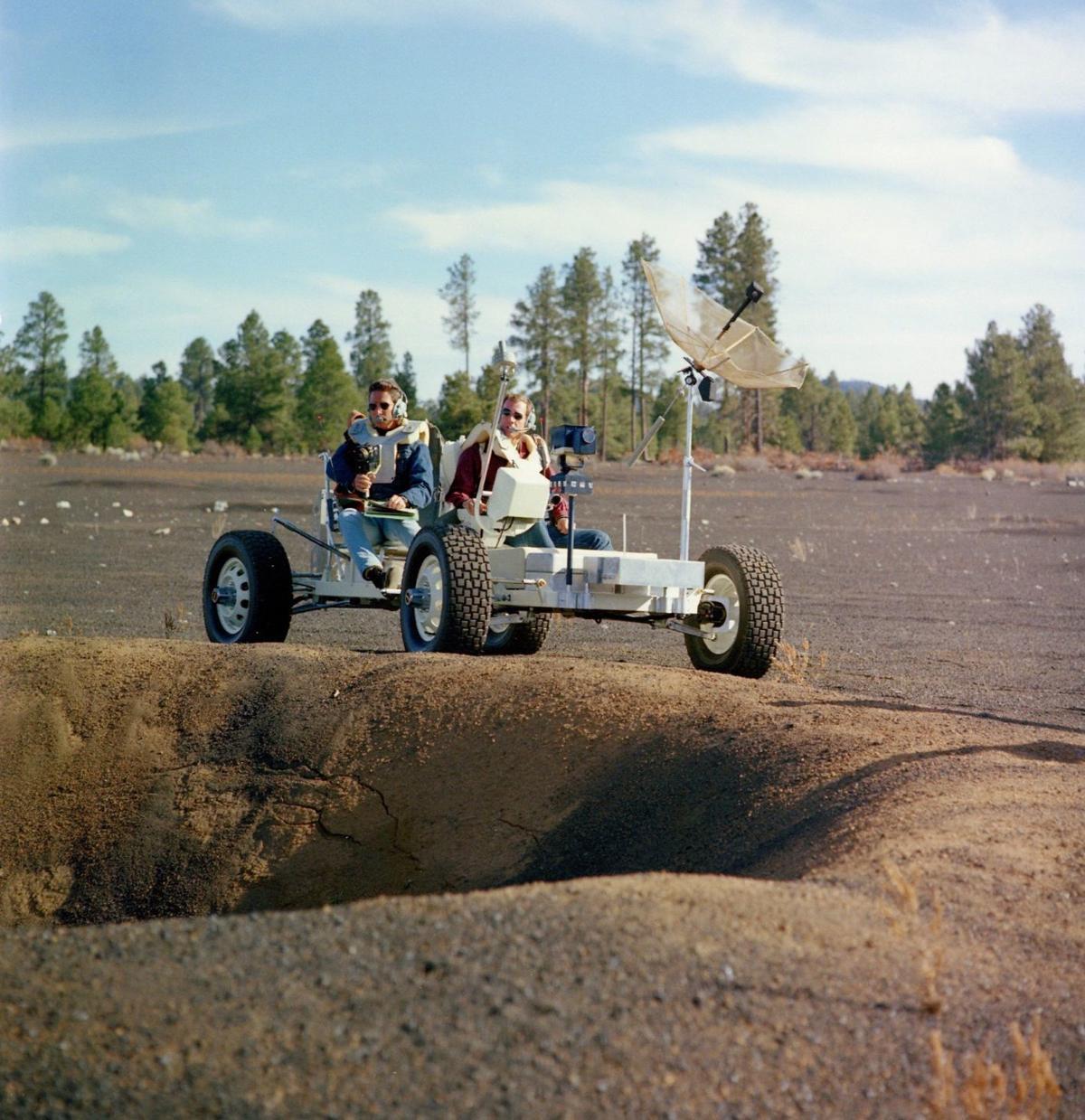 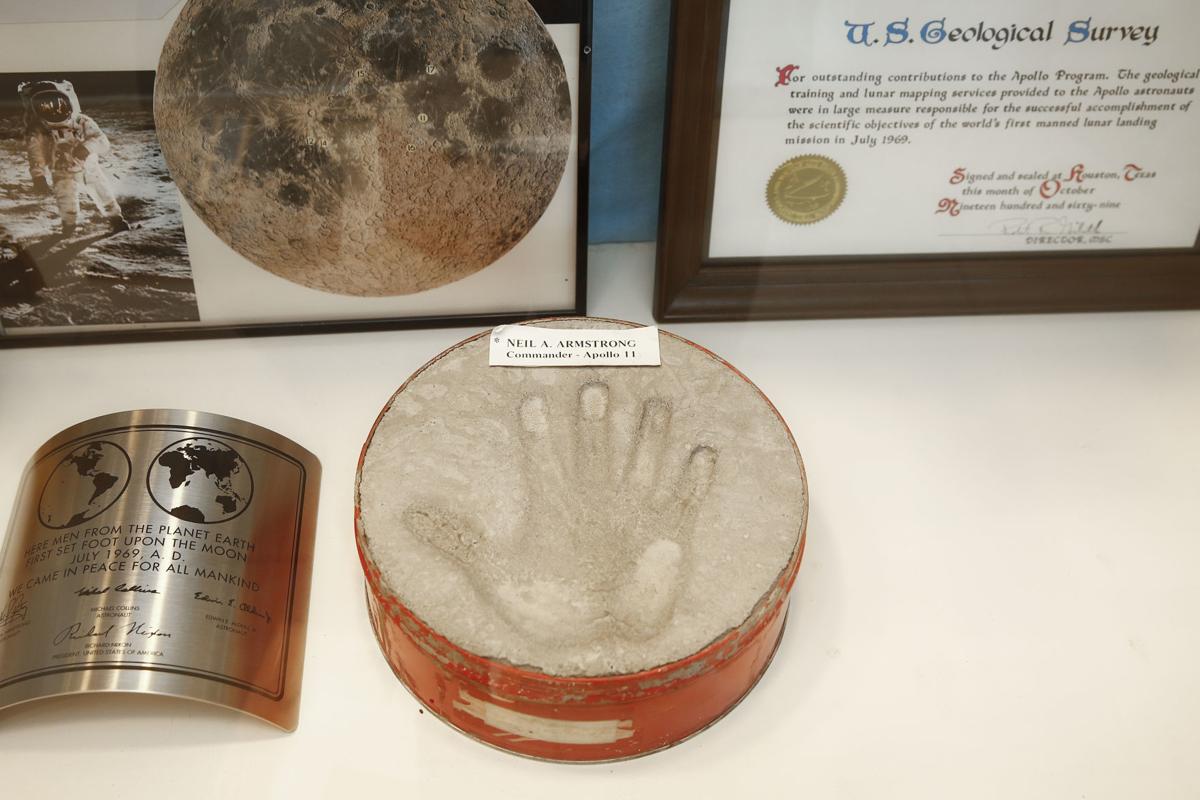 The right handprint of astronaut Neil Armstrong is displayed with other space memorabilia in the lobby of the Shoemaker building at USGS in Flagstaff. 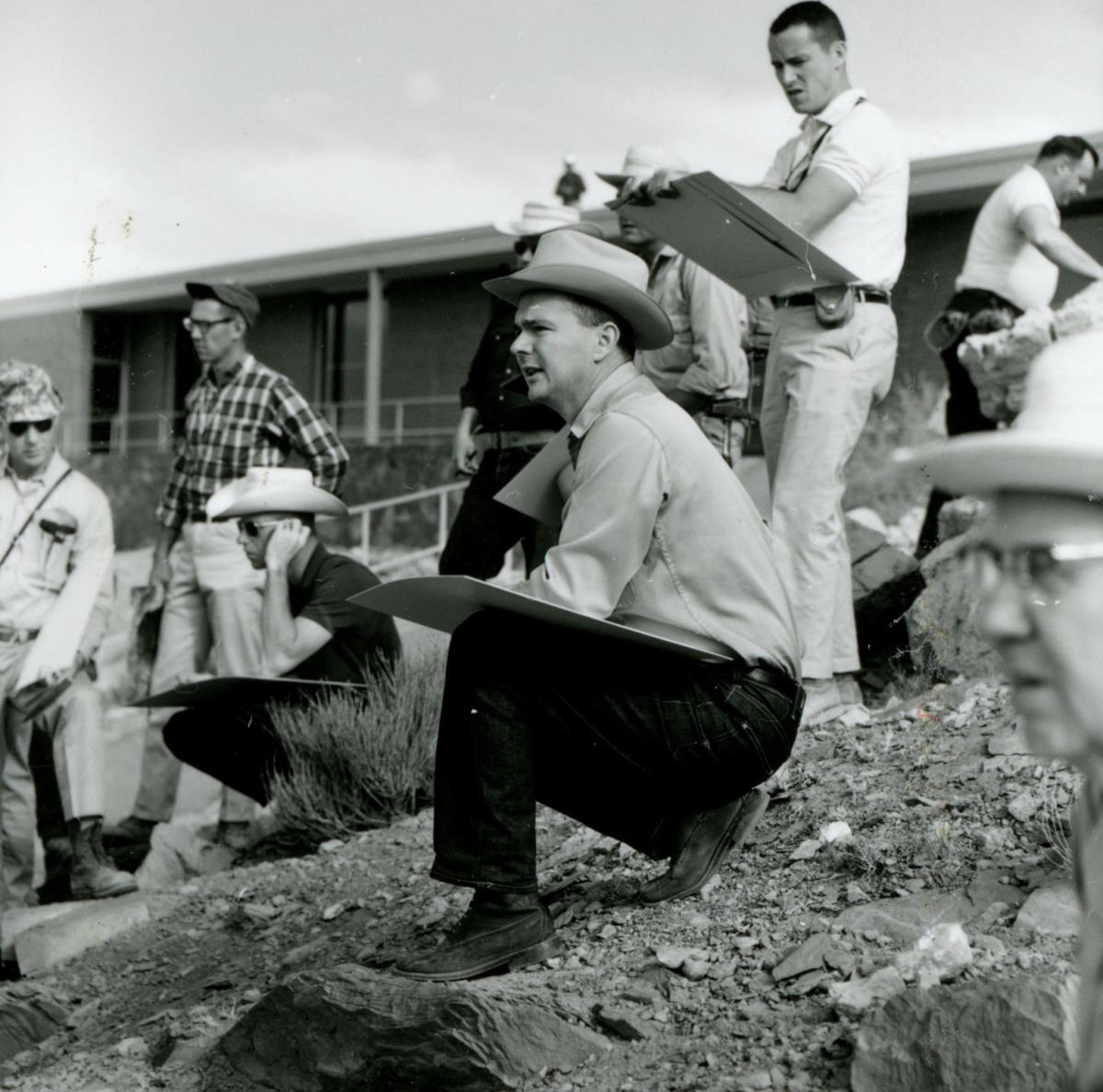 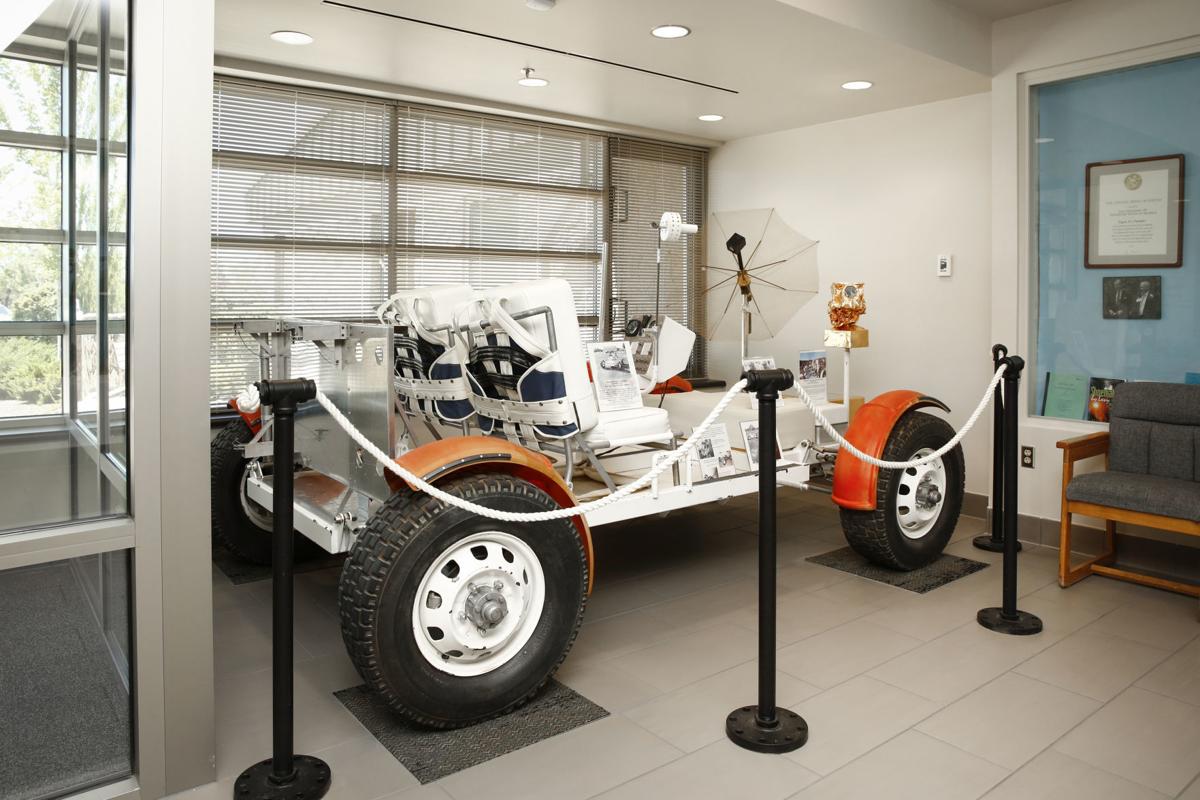 This geologic rover, or grover, was constructed in the Sunnyside area of Flagstaff in 1970. Astronauts used it for field exercises in northern Arizona during the rest of the Apollo Program. The grover is housed in the lobby of the Shoemaker building at USGS in Flagstaff. 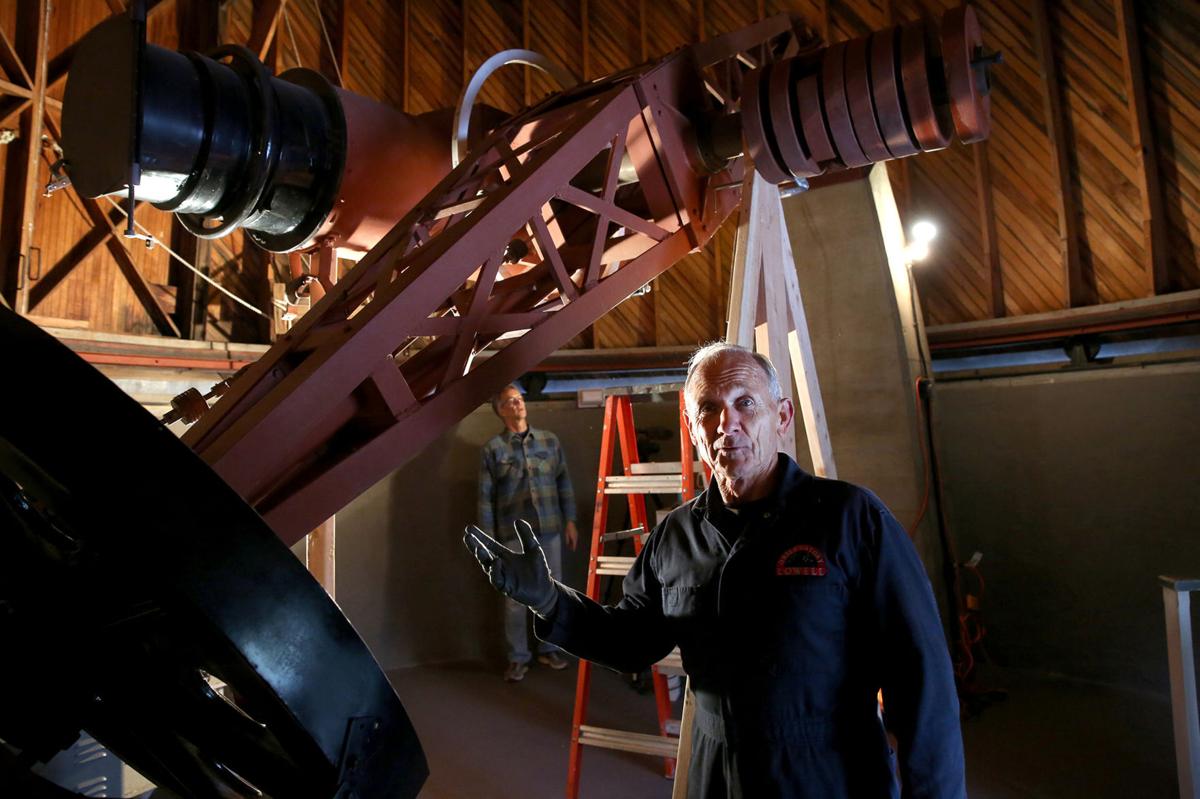 Ralph Nye led the restoration project of the 24-inch Clark Telescope that Percival Lowell used to map the surface of Mars. The telescope was also used to make maps of the moon for Apollo astronauts.

Every astronaut who walked on the moon, from Neil Armstrong to Eugene Cernan, prepared for their journey in northern Arizona. From the rocky depths of the Grand Canyon to cosmic views from Flagstaff's dark skies, the area proved to be an ideal place for lunar buggy testing, geology training, mission simulations and moon mapping.

This year and next, Flagstaff will pay tribute to its part in America’s achievements in moon exploration by marking the 50th anniversary of the Apollo 11 mission, which put humans on the moon for the first time July 20, 1969.

The celebration starts Friday, July 20, with a free Lunar Legacy Launch at the historic Orpheum Theater downtown. Doors open at 5 p.m. with festivities beginning at 5:30 p.m. The night kicks off with presentations by Flagstaff Mayor Coral Evans and space historians, and includes the showing of vintage footage of the 1967 explosion of a cinder field near Sunset Crater. Starting at 8 p.m., hear music by local groups Planet Sandwich and Lucky Lenny.

Headlines in the Arizona Daily Sun the summer of ’69 reveal the great extent to which Flagstaff was part of the nation’s space program.

“Lowell maps guide Apollo,” “Scientists here play key Apollo role,” and “Flag gets Apollo TV role,” were among the front-page headers. During its live coverage of Apollo 11 from liftoff to splashdown, CBS News did cutaways from the Astrogeology Branch of the U.S. Geological Survey in Flagstaff. Walter Cronkite visited the city in early July as part of his preparations for the broadcasts.

It was the second time Flagstaff was cast into the spotlight with a role in making space history. The first being astronomer Clyde Tombaugh’s discovery of Pluto at Lowell Observatory in 1930.

Flagstaff’s participation in the Apollo Program lasted as long as the U.S. manned moon missions, from 1961 to 1972. Lowell Observatory, the Naval Observatory, Meteor Crater, Sunset Crater, Hopi Buttes, the Cinder Lake crater fields and the Grand Canyon all played a role in preparing Apollo astronauts. The new Flagstaff-based USGS Astrogeology Branch, led by Eugene M. Shoemaker, made a significant contribution with lunar geologic mapping and training for work on the moon.

In an elaborate effort to model the moon surface, the branch worked with NASA to blast hundreds of different-sized craters in the earth to form the Cinder Lake crater fields. They served as a comparable moon surface to test astronaut skills and instruments. NASA and the USGS also put three potential lunar rover vehicles to the test near Sunset Crater, Miriam Crater and surrounding volcanic features. One rover built in Flagstaff remains on display at the USGS Astrogeology Science Center.

The story of astrogeology, the geologic study of solid bodies in the solar system, began with Shoemaker, the geologist who coined the term. It was a new area of science and he was its leading proponent. Certain that geologic study would soon extend into space, he established the astrogeology study unit in 1961 at the U.S. Geological Survey campus in Menlo Park, California. Two years later, the group moved to Flagstaff, a place Shoemaker considered ideal for such work because of its terrain, established observatories and nearby Meteor Crater, the Earth’s best-preserved meteorite impact site.

Along with the work of Shoemaker and his team, contributions to Flagstaff’s lunar legacy include:

•    Artists working with scientists at Lowell Observatory to create detailed lunar topographic maps. They did this partly by observing the moon through Lowell telescopes, including the historic 24-inch Clark refractor, which remains in use today for public education.

Shoemaker’s fascination with the moon arose from an experience he had on his 20th birthday while working on a uranium study on the Colorado Plateau. He looked up to see a beautiful nearly-full moon that night.

“That first evening of Gene’s focus on the moon, and its then uncertain geologic nature, led that spring to Gene’s admitted ‘epiphany’ about going the moon himself, and exploring its geology,” read a 2005 report outlining the activities of the USGS Astrogeology Branch in the Apollo Program.

A health issue prevented Shoemaker from becoming the first astronaut-geologist, but he helped train many Apollo astronauts, and he sat with newsman Cronkite giving commentary during the Apollo moonwalks. In 1992, President George H. W. Bush presented Shoemaker with the National Medal of Science, the highest scientific honor bestowed by the president of the United States.

Shoemaker died in an auto accident in 1997 while working in Australia. As a tribute to the planetary geologist who never was able to fulfill his desire to go to the moon, NASA sent Shoemaker’s ashes to the moon aboard the Lunar Prospector probe in January 1998.

"I don't think Gene ever dreamed his ashes would go to the moon," said his wife Carolyn at the time of the probe’s launch. "He would be thrilled."

Lunar maps for NASA’s manned moon missions were created at Lowell. See the 24-inch Clark Telescope, which was used to help make the maps. First put into use in 1896, the Clark is one of the most famous telescopes in the world and a national treasure. It is open for daytime tours and evening viewing.

Take the short but significant self-guided tour of the lobby of the Shoemaker building on the USGS campus. The displays, which include a lunar rover that was tested in Flagstaff, pay tribute to the work of founder Eugene Shoemaker and his team. The handprint of Neil Armstrong, taken when he visited Flagstaff in 1963, is behind glass along with patches from the Apollo missions and other space travel memorabilia.

Located about 40 miles east of Flagstaff, this meteorite impact site is the best preserved on Earth. Shoemaker took astronauts to the crater, teaching them about its formation and how they might recognize craters on the moon.

Northern Arizona is a landscape shaped by volcanic activity, one of the most recent being the eruption at Sunset Crater less than 1,000 years ago. Like they did at Meteor Crater, geologists took astronaut recruits here to help them understand and identify topographical features.

Millions of visitors a year can attest to the wonder of the Grand Canyon’s geological strata. In March of 1964, USGS geologists took 28 astronaut recruits into the canyon. The goal was to interest them in geology so they would have the skills to study geological features in space.

Take a selfie with geologist Shoemaker. A large photo of him in a test spacesuit fills a wall at this breakfast and lunch spot in Flagstaff’s southside. The café celebrates the 1960s, when the town was an astronauts training center.

When it comes to issues of outer space, there’s no question that Flagstaff is a Pluto town, through and through. But for the next year or so, …

Flagstaff Festival of Science: Accelerating into the future

Every September, the Flagstaff Festival of Science celebrates all aspects of science. Northern Arizona University, local organizations and gov…

A large photograph of geologist Eugene Shoemaker in a test spacesuit hangs over the dining area at Carmels Flagstaff, a breakfast and lunch spot south of downtown.

The right handprint of astronaut Neil Armstrong is displayed with other space memorabilia in the lobby of the Shoemaker building at USGS in Flagstaff.

This geologic rover, or grover, was constructed in the Sunnyside area of Flagstaff in 1970. Astronauts used it for field exercises in northern Arizona during the rest of the Apollo Program. The grover is housed in the lobby of the Shoemaker building at USGS in Flagstaff.

Ralph Nye led the restoration project of the 24-inch Clark Telescope that Percival Lowell used to map the surface of Mars. The telescope was also used to make maps of the moon for Apollo astronauts.