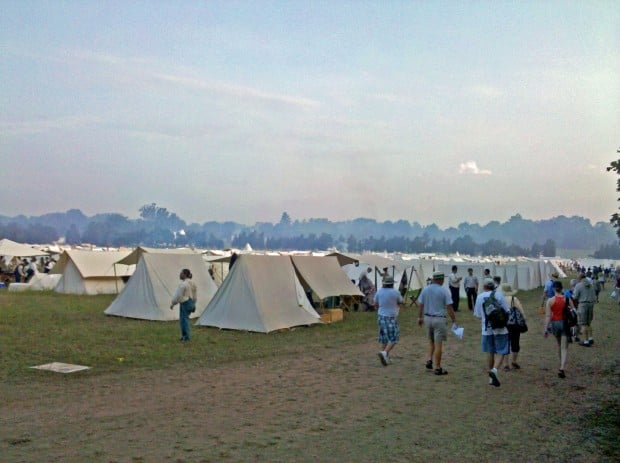 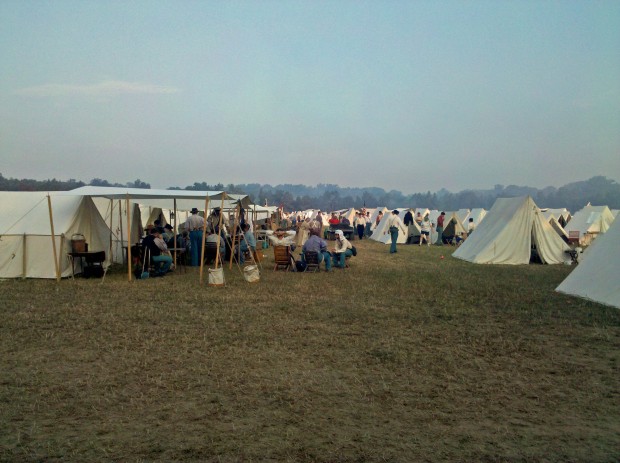 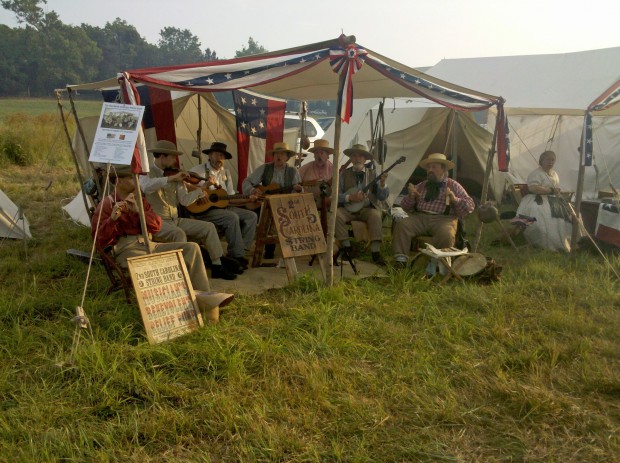 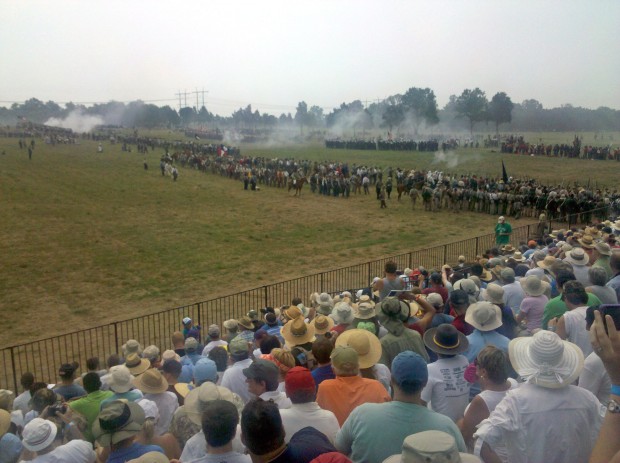 Confederate divisions push federal troops and begin to turn their flank in the closing actions of the Battle of First Manassas. (Courtesy photo by Dennis Foster) 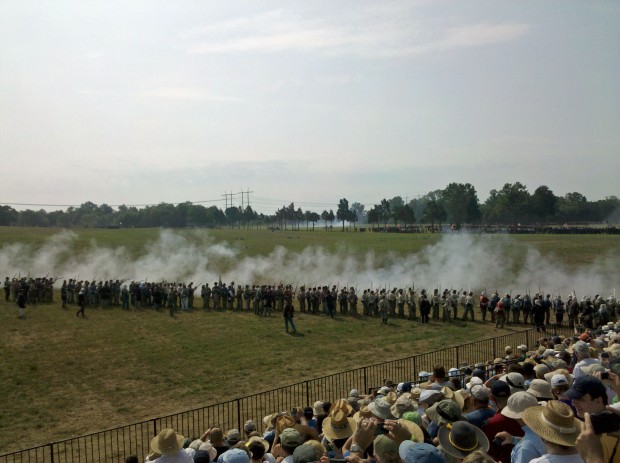 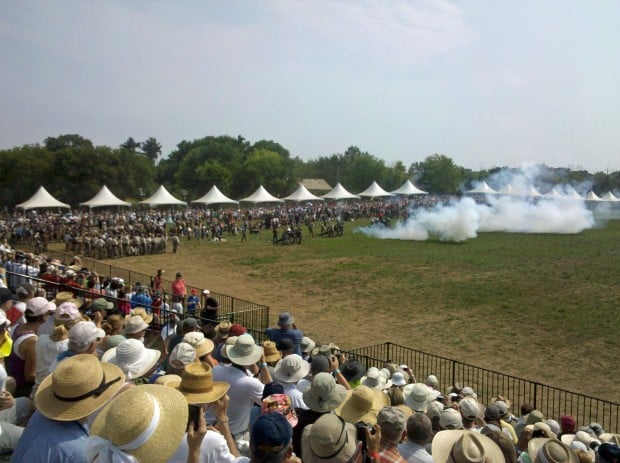 In the early afternoon of July 21, 1861, Captains Ricketts and Griffin marshal their artillery batteries into position to attack the unsupported flank of Col. Thomas Jackson's brigade.

The thunderous roar of the federal cannon fills the air. The Confederate cannon responds in kind. Smoke covers the field as the first major battle of the Civil War rages on over the plains of Manassas.

During a scorching week this past July, more than 8,000 participants have come to a small town in Virginia to help commemorate the 150th anniversary of the Battle of Manassas, the first large-scale conflict of the Civil War.

They have come to re-enact the battle, wearing period clothing, armed with period weapons and giving the tens of thousands who have come to catch a brief glimpse of life during that turbulent time. They are living in camps on the grounds and spend time practicing battle formations. As we walk around the encampments in the early morning hours, we can half close our eyes and feel as if we have been transported back in time. Some soldiers are starting to get up, while others stoke small fires. Others are practicing drills, while a blacksmith is already hard at work.

We marvel at the bravery and courage of men thrust into war. We know that there are no bullets, and that the cannon fires blanks, but still we feel some of the realism of the actual event. We follow the successes and failures of both sides, as this is a war among ourselves. We can extol the virtue of men fighting for what they believe in, for a cause that unites them, even if the reasons for war, as is so often the case, are flawed.

Earlier in the day federal forces, commanded by Col. Burnside, marched around the Confederate left and crossed the Bull Run nearly undetected. They were slowed down when Generals Bee and Bartow rallied their men to make a stand on Matthews Hill. With the entry of Col. Sherman's brigade, the Confederate lines crumbled and they retreated to nearby Henry Hill, where Col. Jackson had just deployed his men. Jackson's Virginians stopped the federal forces, earning him the famous nickname of "Stonewall" Jackson.

Of course, the issue of slavery is unrelentingly entwined into the birth of the Civil War. Clearly, it was the driving force for secession in the seven states of the deep South that left the Union before President Lincoln even assumed office. However, this motivation becomes more complicated for four other slave states that refused to secede until hostilities broke out and President Lincoln called for the raising of an army to quell the rebellion by force. And, even with one-third of the states in secession, there still remained four other slave states that remained with the Union.

Likewise, when it comes to the personalities involved, the issue of slavery was convoluted in a way that today we can hardly understand. The sitting vice president under Lincoln owned slaves at the outset of the war. General Grant had owned at least one slave in the late 1850s. Confederate General Longstreet owned no slaves. General Pickett, who led a futile charge at Gettysburg, not only didn't own slaves, but was vocal in his opposition to this execrable institution.

Indeed, if the Civil War had ended with a federal victory that day near Manassas, it isn't clear that slavery wouldn't have persisted for years, or decades, to come, as Lincoln had no initial intention of challenging slavery in the existing slave states. It wasn't until the fall of 1862, with the issuance of the Emancipation Proclamation, that abolishing slavery became a formal goal of Union efforts in winning the war.

Today, we have the luxury of knowing how the Civil War turned out and that the terrible price, paid in blood, bought an end to slavery. Consequently, we can be more detached and relive the battles, immerse ourselves in the tactics and strategies of the two opposing armies, while acknowledging Robert E. Lee's famous words, "It is well that war is so terrible lest we should grow too fond of it."

The battle seesawed throughout the afternoon, but the arrival of fresh Confederate troops tipped the balance and broke the federal attack. As their lines came apart, the retreat turned chaotic and Major Stuart led his cavalry in pursuit. This attack was met by Major Sykes' U.S. Regular Infantry, which formed an "infantry square," a defensive formation that ended the attack and allowed the federal forces to withdraw.

The events commemorating the 150th anniversary of the Civil War will continue for the next four years. They will offer innumerable opportunities for us to study and contemplate this period of our history. And, at the end of the day, we can recall these words from President Lincoln's second inaugural address, "With malice toward none, and charity for all ... let us strive on ... to bind up the nation's wounds."

Dennis Foster has lived in Flagstaff for more than 20 years, but was born in Washington, D.C. He has maintained a strong interest in the Civil War and has visited many of its battlefields.

The National Park Service maintains most of the Civil War battlefields and will be offering many commemorative events. Find out more on their web page:

You can find a more comprehensive listing of Civil War activities here:

Perhaps the most notable re-enactment will occur at Gettysburg, in 2013. Keep up with this event through their Visitors' Bureau:

To read more on the Civil War, James McPherson's "Battle Cry of Freedom" is an excellent place to start.

To learn about the individual battles of the Civil War, "The Civil War Battlefield Guide," published by The Conservation Fund is an indispensable resource.

Combat your fitness fears and start enjoying a sustainable workout

Combat your fitness fears and start enjoying a sustainable workout

These dog breeds are gaining popularity in the US

These 37 dog breeds have gained in popularity over the past 20 years in the United States.

Half-sister is obsessed over newfound brother

Family and friends have doubts about widower's younger woman

DEAR ABBY: I am a widower. I lost my wonderful wife of 35 years to heart disease eight years ago. I have had no relationships with women since then.

DEAR ABBY: While shopping with a friend recently, I was put in an awkward situation in regard to a store discount. Having served in the milita…

Bandanas in home decor? Here's a twist on interior design

Bandana prints have gravitated from the wardrobe to the rest of the home. Here are some ideas of how to incorporate the bandana motif in your home.

Guest looking for a sneaky goodbye

DEAR ABBY: After a bad breakup, a good friend and her husband offered me a room in their home. They have two wonderful teenagers. Then the pan…

Do you really need to drink 8 glasses of water a day? A scientist explains why your kidneys say 'no'

Should you drink eight glasses of water a day? An exercise physiologist says that in rare cases people can actually die from drinking too much water.

Mother’s Day is a special occasion to celebrate, and the following wines will enhance everybody’s enjoyment. These wines are exceptional and e…

DEAR ABBY: I have been married to my second husband for more than 15 years. My 30+-year-old son from my first marriage, who was born disabled,…

DEAR ABBY: My daughter received her tax refund recently. It amounted to $8,700. Approximately $5,000 is for overpaying on taxes. Approximately…

Confederate divisions push federal troops and begin to turn their flank in the closing actions of the Battle of First Manassas. (Courtesy photo by Dennis Foster)