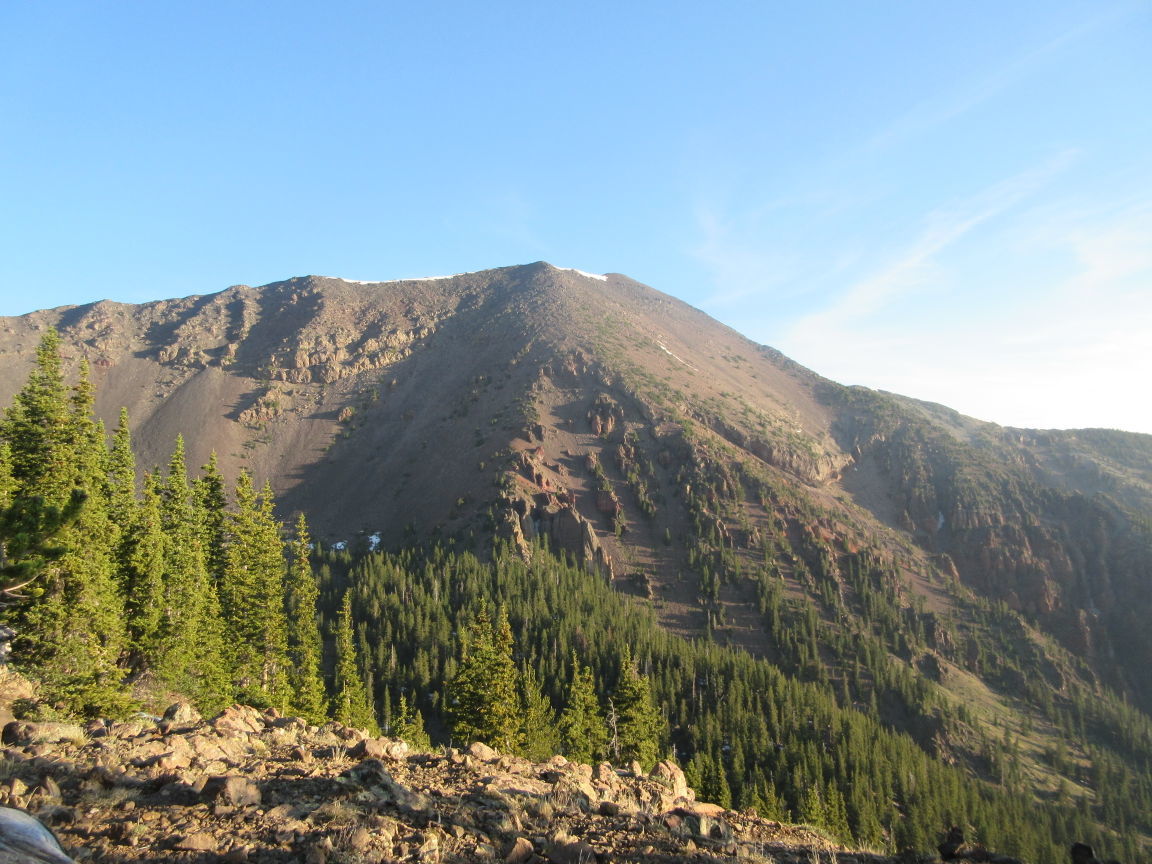 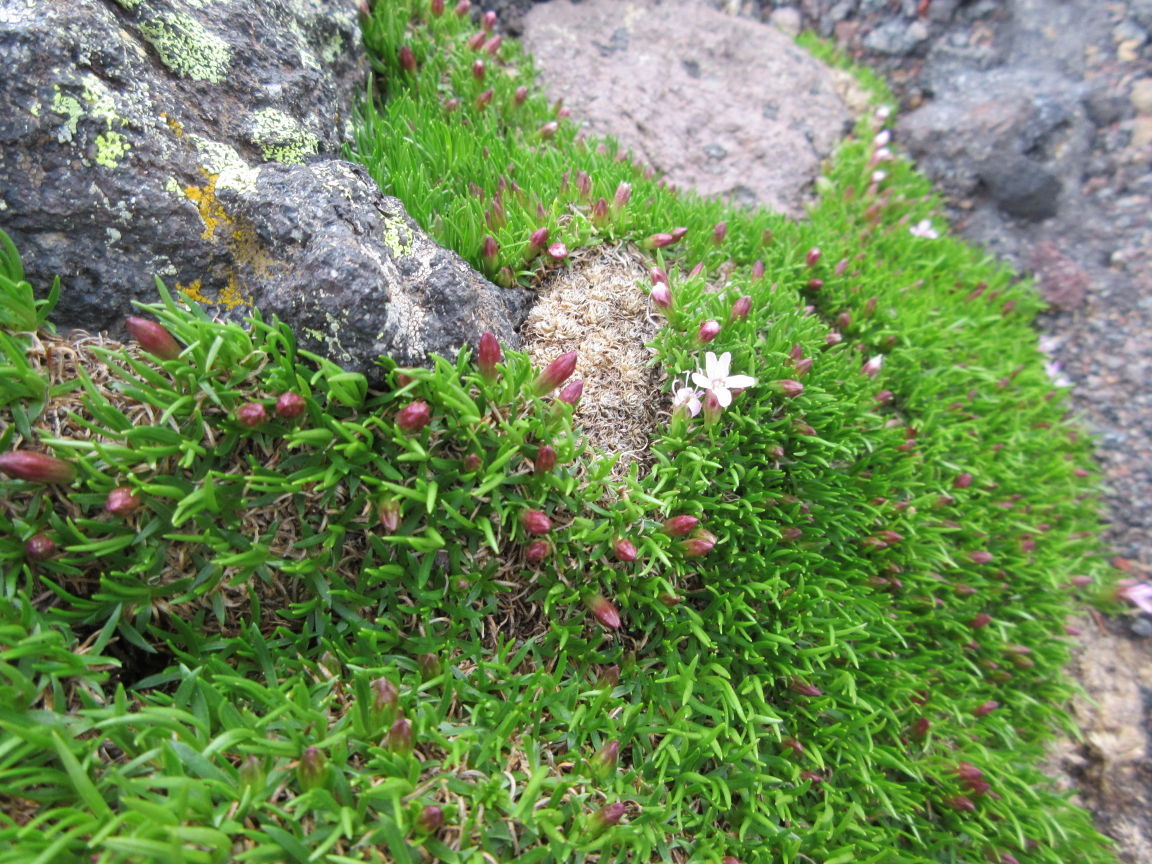 Moss campion starting to bloom above treeline on Agassiz Peak 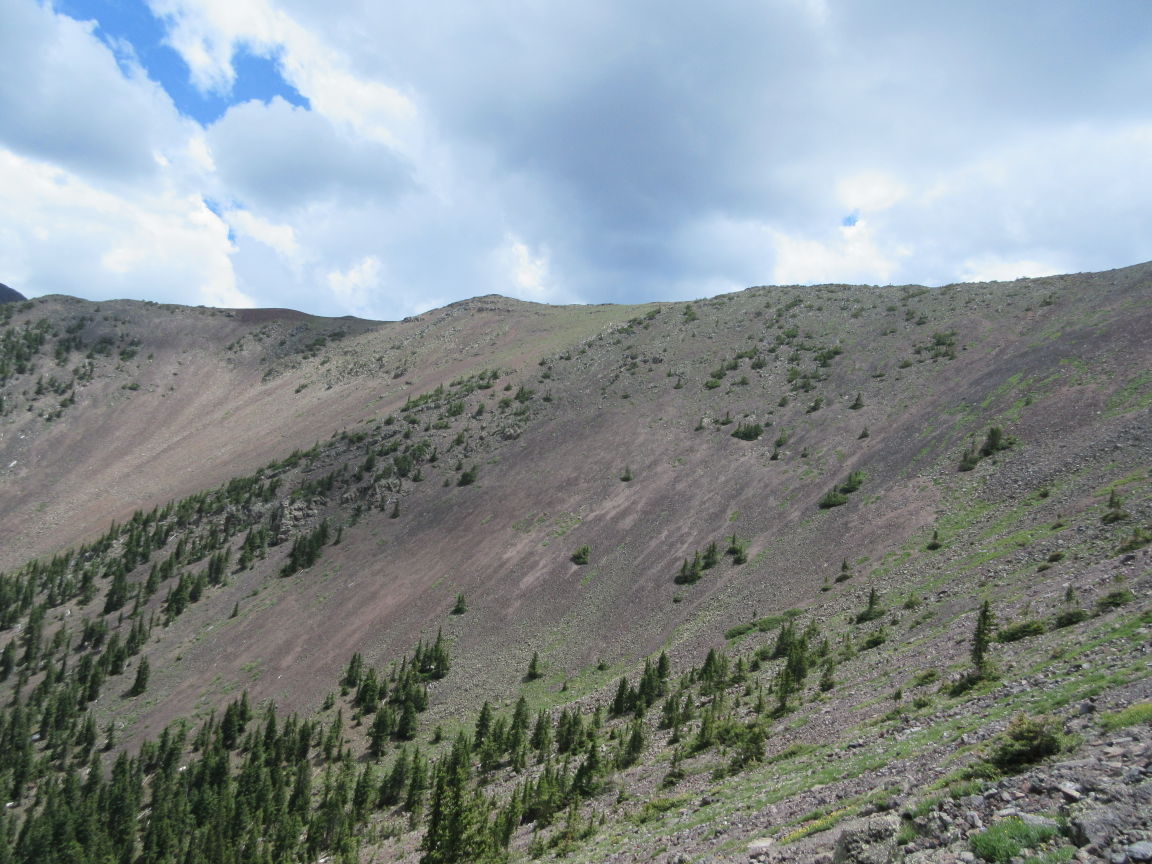 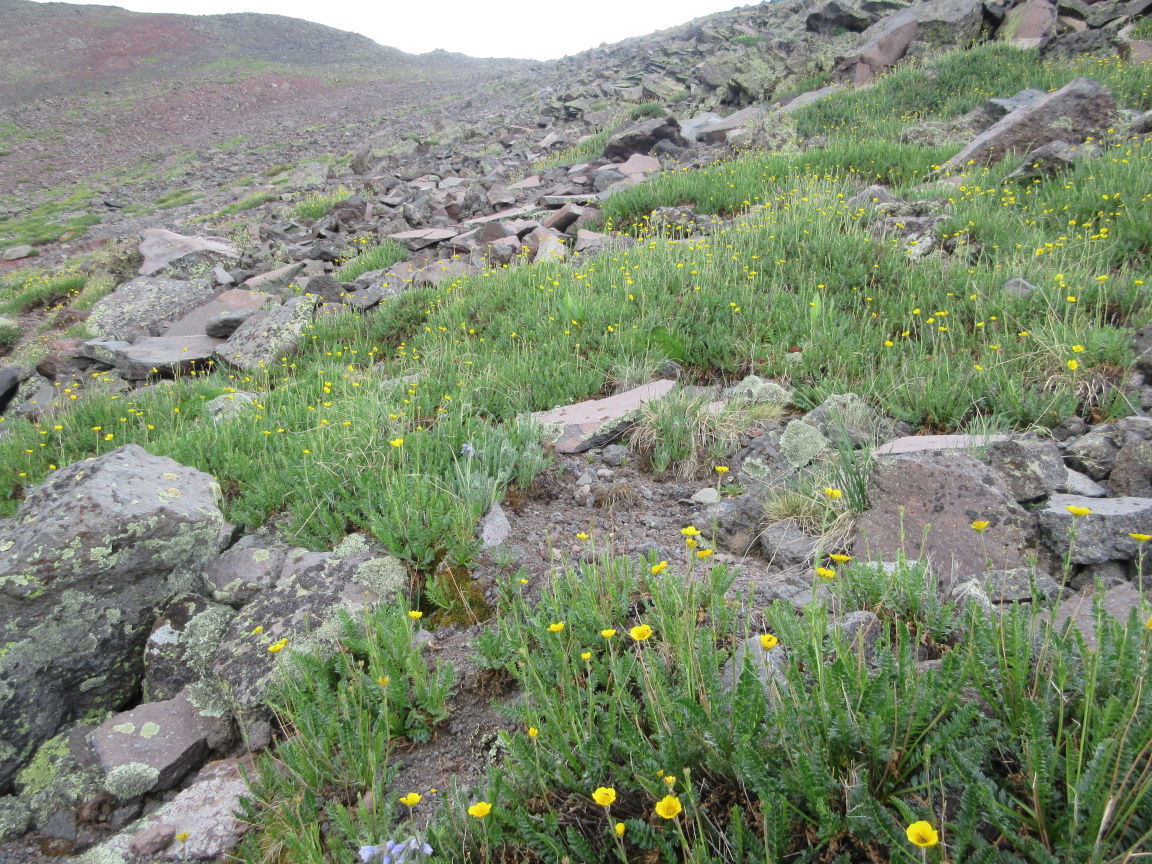 Ross' avens holding things together above treeline on Agassiz Peak 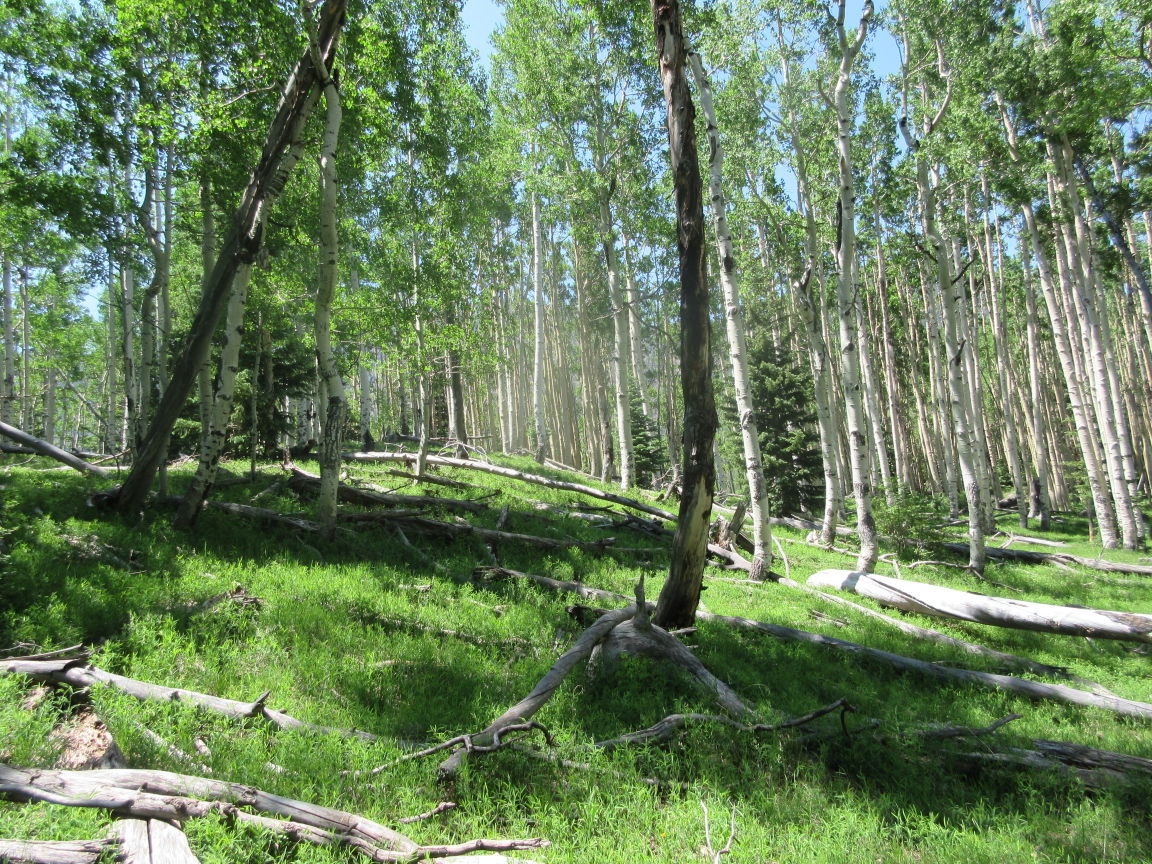 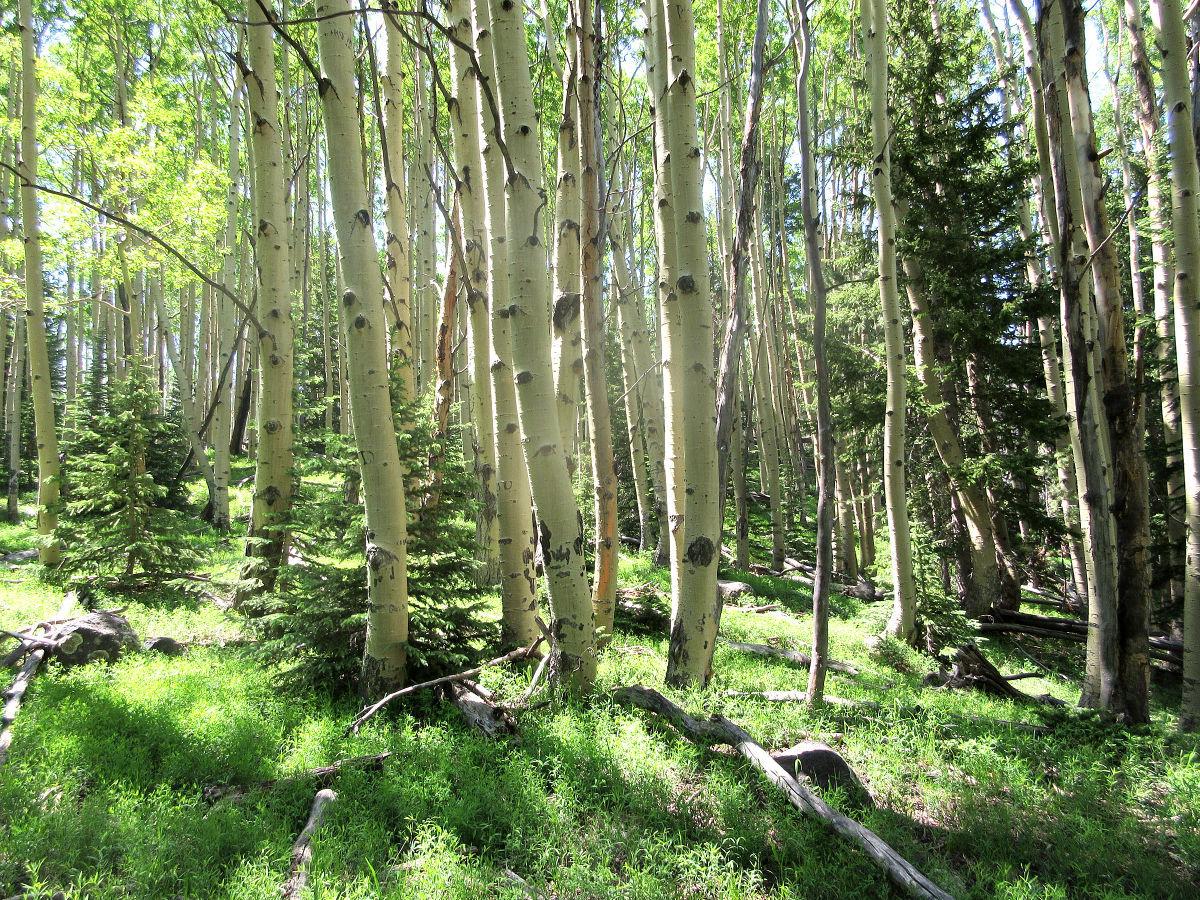 BY GWEN WARING Special to the Daily Sun

I was fortunate to do a backpacking trip around the mountain in late June, and I have concluded that spending that kind of time is a must when writing about any place. Walking along, I got to see so much and wanted to share a few thoughts on the experience.

I joined the trip near Veit Springs, and at a nearby spring we were able to fill our canteens with spring water, which is the best water on the planet. Traveling from there, we went clockwise through the mixed conifer zone, between about 8,000 and 9,000 feet in elevation.

It was beautiful. Even the aspens, which we all worry about, seemed pretty healthy. I was struck by how few invasive plants there were. There were little springs running everywhere, surely from perched aquifers that run for awhile after such a wet spring as we’ve had this year.

As we made our way along the north side of the mountain toward the northeast, things were a little drier, due to a rain shadow that local weatherman Lee Born says is cast more during winter rather than summer storms. This means that this area receives less precipitation, as most of it is captured on the western side of the mountain, as most winter storms come from the Pacific Ocean.

By drier, I mean that the ground cover was thinner, and some of the conifers, particularly Douglas fir, are experiencing some pretty extensive die-offs. The ground cover plants in this area thinned considerably, mostly down to a legume called Nevada pea, which is a common understory plant in many western volcanic mountains. Perhaps its nitrogen-fixing habit, common to legumes, helps contribute nitrogen to otherwise nutrient-poor soils. This species provides ground cover under most of the forests of the Peaks.

On up into the Inner Basin, we really lucked out and saw one of the Peaks’ five orchids — yes, there are orchids on the mountain—the hot pink fairies slipper (Calypso bulbosa). It was tucked in on the edge of Engelmann spruce and corkbark fir along a meadow. Camping in the lower basin, spending the time to see the light change, showed us how vast this sky island mountain really is.

Further up the basin, Snowslide Canyon was still buried in snow, and there clearly had been a recent avalanche: The snow was littered with freshly-shredded pieces of spruce and fir. The snow was melting, roaring like a small river, and we filled our canteens again with the best water there is.

According to local water expert, Don Perry, the water in the Peaks is young in age and pretty free of solutes such as calcium carbonates, as it comes from the sky. It was amazing to hear and walk along this stream, and remember that there was once lots of water flowing down this basin before it was largely captured and diverted for our drinking water here in Flagstaff.

This mountain is fragile and we all have to love it gently. Looking out at the slopes of the Inner Basin peaks from Core Ridge at 11,525 feet, it becomes obvious that a lot of slopes are pure scree, or small, cinder-like pieces that are coming down. We heard a rockslide down the inner slope of Humphreys.

A lot of these slopes are held in place by tundra plants such as the rose, Ross’ avens, and a cushion plant, moss campion. These tigers perform a similar function above treeline through much of the northern hemisphere. And they are beautiful.

This mountain is alive, and vast, and precious.

I will be presenting a slide show of this trip in the fall. Please stay tuned.

Gwendolyn Waring is a mother, writer, ecologist and artist in Flagstaff. She is hoping to raise funds for the book, "The Natural History of the San Francisco Peaks," by encouraging either direct contributions or through purchasing her artwork, which is currently on display at Arizona Handmade Gallery and at Late for the Train on Fort Valley Road. WaringArts.com has info on the project, as does her Facebook page.

Dave Barry's Year in Review: Trying to find humor in a tough 2020

In the past, writing these annual reviews, we have said harsh things about previous years. We owe those years an apology. Compared to 2020, all previous years, even the Disco Era, were the golden age of human existence.

Son with new girlfriend grows more distant from his mother

DEAR ABBY: I'm a mom of three young adults, a daughter and two sons. The oldest recently married. My youngest is finishing his last two years …

Pastor having affair keeps his engagement under wraps

DEAR ABBY: A new single pastor was assigned to my church. He asked if I was single and if I had kids. I told him no, and we began having an affair.

DEAR ABBY: I'm a 24-year-old woman who has been married for four years. My husband, "Jerry," and I have two young boys. Jerry is military. I s…

Couple reaches a stalemate in marriage without intimacy

DEAR ABBY: My husband and I are going on 19 years of marriage and have three teenage girls. We have had multiple rounds of marriage counseling…

Couple's house is not their home with parents next door

DEAR ABBY: My boyfriend and I have been living together for almost five years. His parents bought a house a few doors down. They pop in whenev…

Communication with college friend is a one-way street

DEAR ABBY: A friend of mine from college (I graduated four years ago) is incredibly kind but terrible at keeping in touch. She has never been …

Moss campion starting to bloom above treeline on Agassiz Peak

Ross' avens holding things together above treeline on Agassiz Peak