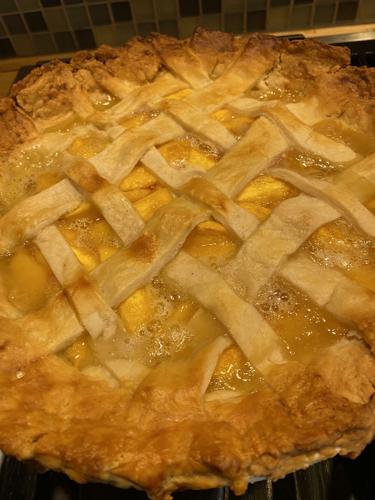 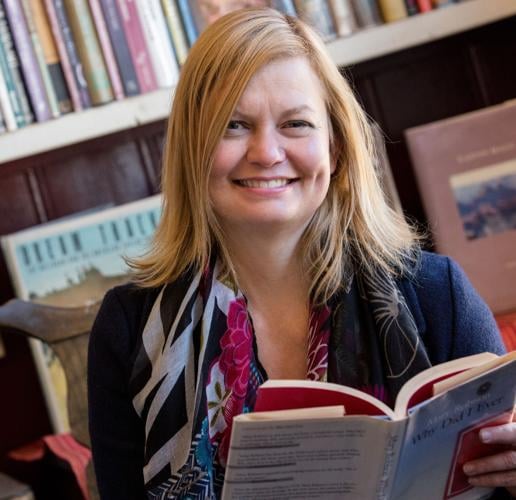 It is spring in the northern hemisphere, and the peaches cost eighty-nine cents with a digital coupon at Fry’s. Sam Sifton, the food guy for the New York Times, wrote in his recipe for peach pie that, “For most of us, a great and truly perfect peach is a rare event. We can expect but one or two a season, for all our trying. Enter the pie. A peach pie can elevate good peaches to excellence and great ones to the sublime.” That is usually true here but I hail from Utah where the peaches, especially Freestone, separate from the pit, etching the flesh red, are usually delicious. But this year, the peaches at Fry’s have been delicious. They come in hard, but you can press them and feel the slightest give. I had peaches that started hard as rocks and ended still like a rock but shriveled. It’s a great peach year.

My friends who grew the only peach tree I know about in Flagstaff are back for a visit. I am worried about them. They have nonstop appointments with everyone in town it seems. I picture them zooming up and down Flagstaff streets, weaving themselves back into the community that misses them. One thread from the fabric doesn’t destroy the fabric and, when they visit, there is room to weft and warp them back into the fold.

In Canyon De Chelly, the Diné planted peach trees and lived off their fruit for decades, even centuries, until Kit Carson came with his soldiers and forced them to walk from their land nearly 400 miles to the Bosque Redono Reservation at Fort Sumner. Carson and his men killed those who couldn’t keep up. The survivors forced to live in the Reservation tried to farm the land, but the land wasn’t arable. People starved, but some also survived. Eventually, the Diné were able to negotiate a return to their own lands where they started again to farm and raise sheep. Most of the peach trees had burned but a few survived. Reagan Wytsalucy grew up near Gallup, New Mexico. Her father, who grew up near Shonto, Arizona, helping his parents herd sheep, went on to own McDonald’s franchises across Navajolands. Wytsalucy transferred from BYU in Provo, Utah to Utah State, in Logan where she could study with agricultural scientists and historians.

Although some of the old trees survived, Wytsalucy wanted to find the remnants of the rest. She, her father and two horticulturists took off across Arizona and New Mexico, hunting down lost seed and orchards. “It took three years for Wytsalucy to receive her first peach seeds, handed to her by an 85-year-old woman in Canyon de Chelly, a lush collection of gorges in northeastern Arizona in the Navajo Nation. Encouraged by that first success, Wytsalucy kept knocking on doors all over the Four Corners area. Eventually, she tracked down eight more orchards.” Now, Wytsalucy works with communities across Navajolands to rediscover and replant these old peach varietals.

Not everything can be repaired. One thread from a fabric doesn’t fray the entire cloth, but if you take enough pieces out, threads fly far across the land. Wytsalucy is pulling the threads of the story of the peach tree back together but it’s not easy, and she has community and university support on her side.

Trees have weird relationships with the soil in which they grow. In the Ponderosa Forest around Flagstaff, there are mycelia, the netting underneath the ground that produces mushrooms when conditions are right, use their tiny hyphae to transform microorganisms from the soil into nutrients for the trees. Mosses, ferns and dead trees all serve a purpose in the forest. If you take out a tree or a chunk of mycelia, it’s like taking chunks from a fabric. You lose the structure of the forest. You end up with not a forest but a stand of trees that are hamstrung by their lack of fellow forest partners.

The State of Arizona’s legislature just approved an expansion of the voucher program. This voucher system has no means test—which means no matter how much money you make, you can use the $7,000 you make to send your kid to a private school. The previous voucher system was dedicated primarily to kids with special needs, but this new voucher system will provide that $7,000 to any school—or home schooler. This, combined with the forced birth laws, means you can make money having kids.

Recently, a parent tried to explain—through social media mind you—how ESAs (Empowerment Scholarship Accounts) are necessary for her kids. She said the public schools could not provide individual instruction for her child. But, her child’s school experience began after charter schools, and ESAs had already begun to decimate public school funding. If ten students stayed in the public schools, that would have afforded a special education teacher. If twenty students stayed, that would have afforded two and so on. But, instead what we have are people who can afford the difference between the $7,000 they get from public school money and the cost of private education and those who can't. Those who can't have fewer and fewer resources in the public school for lack of those special ed teachers.

The current ESA Voucher program had already begun to unravel the fabric. Perhaps it had been just one thread pulled hard. Perhaps we could have recovered from this, but this ESA program intends to burn down the entire forest and take all the trees. It leaves the most vulnerable students who can’t make up the difference between the private school, sometimes upwards of $30,000 in tuition and the $7,000 “rebate” to manage with fewer and fewer resources. It leaves teachers, who have been providing $30,000 per kid worth of education for $7,000 a kid, to try to be the moss, the ferns, the trees and the mycelia. It means schools are not what they were meant to be—our community made from one whole cloth. Sam Sifton said there’s one good peach a year, but then he offers a recipe for all the peaches. I get it. Your kid is the one great and perfect peach. But peaches in a pie, all together mean the peaches are all sublime.