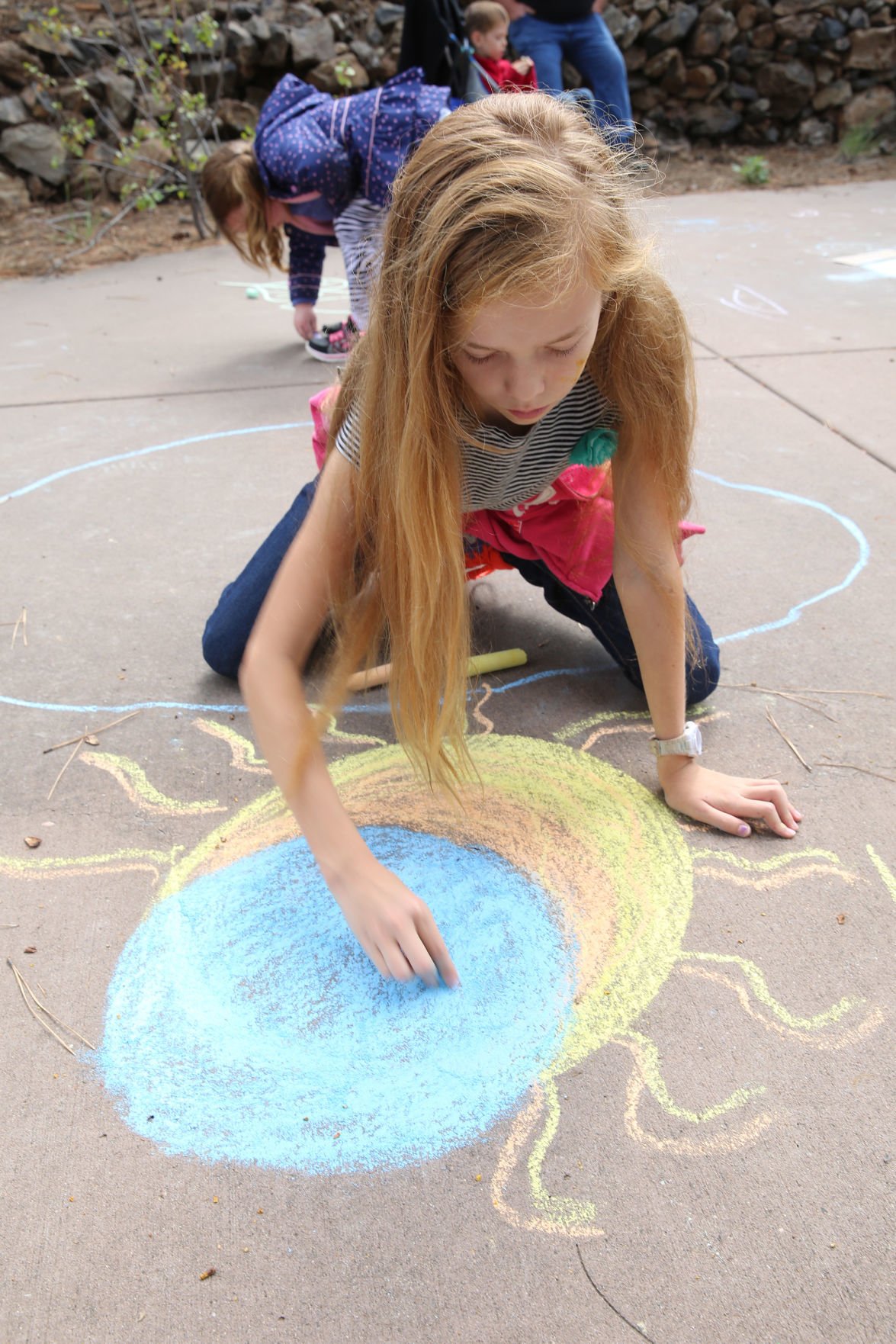 Lyric Olson, 11, draws a chalk eclipse on a concrete patio at Lowell Observatory in this 2017 file photo. 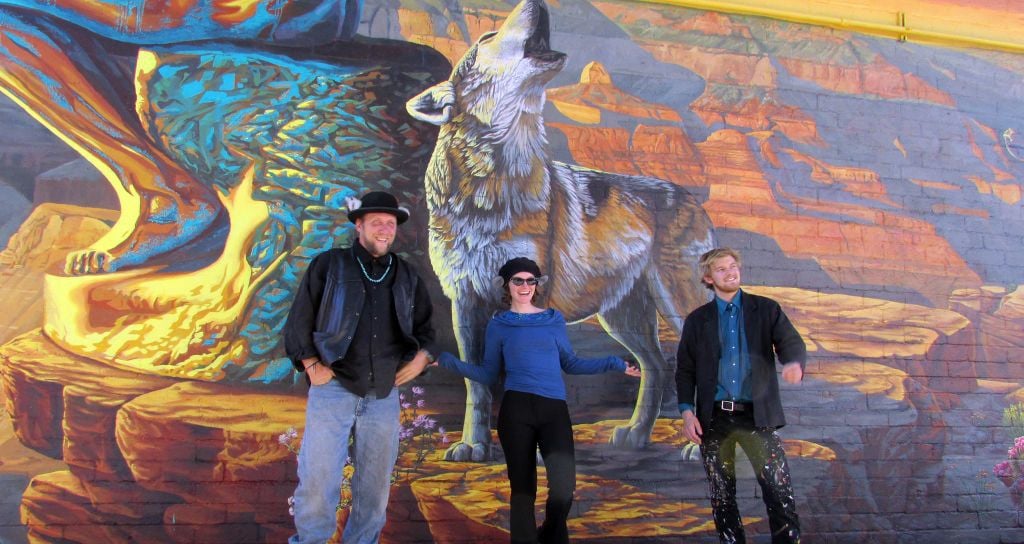 The Mural Mice and Sky Black received a Viola Awards nomination for Excellence in Visual Arts for their 4,500-square-foot mural, "The Sound of Flight."

Summer is coming. The sun is shining brighter, the days are longer and I am taking longer and longer walks—admiring the flowers that have bloomed, the way the sun sets and reflects on the peaks, the sidewalk drawings that appear below my feet.

These chalk drawings catch my attention, in some ways reminiscent of the more permanent works of art that can be found on Flagstaff’s buildings and in its neighborhoods. I am finding them too, as I take more time to explore.

Flagstaff has more than 40 different murals. Just a short walk downtown gives you a glimpse of the variety of work, from the state’s largest mural, "The Sound of Flight," on the side of the Orpheum Theater, painted by Mural Mice and Sky Black, to smaller murals found in neighborhoods south of the tracks downtown. There are seemingly countless installations, mosaics, photography--even the more ephemeral sidewalk chalk—that dot this town.

A copy of Flagstaff’s Public Art map on discoverflagstaff.com will tell you a great deal about Flagstaff’s visual story. While museums remain closed, you can take your own art walk around Flagstaff, learning about its artistic culture while maintaining your designated social distance. Create your own tour and take a walk or bike around your neighborhood and find art that you’ve never seen.

It’s times like these that beg closer exploration and appreciation of art. Even Franklin Delano Roosevelt championed art during difficult times. The 32nd president included money for public art and artists in his 1933-39 New Deal. Public arts have always been important to towns with a burgeoning arts scene, especially in the face of economic upheaval. During the Great Depression, FDR saw to it that the Public Works of Art Project (PWAP) set out to “give work to artists by arranging to have competent representatives of the profession embellish public buildings.”

The PWAP became the Federal Art Project and then inspired many communities to adapt similar beautification outlooks. During and following the Great Depression, the program helped support more than 10,000 artists while beautifying public infrastructure.

You may not have a 20-foot building to paint or the funding to do so, but you can contribute to the living museum that is Flagstaff with chalk art of your own. While the murals are beautiful, I’m finding parts of the ephemeral art that I walk on or come across down the street to be equally as inspirational. Through it I see Flagstaff creating and letting the art go to the natural elements. It reminds me of water calligraphy: poems, names, aphorisms written with water-soaked sponges and sticks only to disappear from the canvas the moment they’re written.

In the words of Thich Nhat Hanh, peace activist and Buddhist monk: “Letting go takes a lot of courage sometimes. But once you let go, happiness comes very quickly. You won’t have to go around searching for it.”

Like many of us in quarantine, I am looking for new outlets to occupy myself amid the crazy of the world. With chalk, everything can become a canvass. On my walks, I find more and more chalk, unsigned and unaccompanied. If I’d walked the same place two days later, would I have missed this fleeting art work?

Chalk drawings date back to the beginning of humankind, with limestone rocks and cave drawings. Sidewalk and street art became extremely popular in 16th century Italy with traveling artists called madonnaris and later in England with the screevers who portrayed current events, religious festivities and political goings-on.

Public art is for the people. As an art form it pushes for social change, seeking to make waves, big or small--whether at home on the driveway or covering a building façade. Even the short-lived chalk artworks can inspire those who come across them. You may not be able to sit in your favorite mountain town museum these days, but learning to leave art where it is may also give you the inspiration to stir up your own (chalk) masterpieces at home.

Margarita Cruz is holds an MFA in Creative Writing from Northern Arizona University. She serves on the Northern Arizona Book Festival board and as editor-in-chief for Thin Air Magazine. Her work has been featured in The Tunnels and Susquehanna Review.

Stories and patterns: The art of weaving

This year’s Flag Wool and Fiber Festival, an annual celebration of fiber arts, wool dying and more, appeared online at the end of May instead …

Stepping into the acting world: The art of the Bard

“If music be the food of love, play on.” If COVID-19 be the test for all performers, devise contingency plans. In the case of Flagstaff’s Shak…

Lyric Olson, 11, draws a chalk eclipse on a concrete patio at Lowell Observatory in this 2017 file photo.

The Mural Mice and Sky Black received a Viola Awards nomination for Excellence in Visual Arts for their 4,500-square-foot mural, "The Sound of Flight."