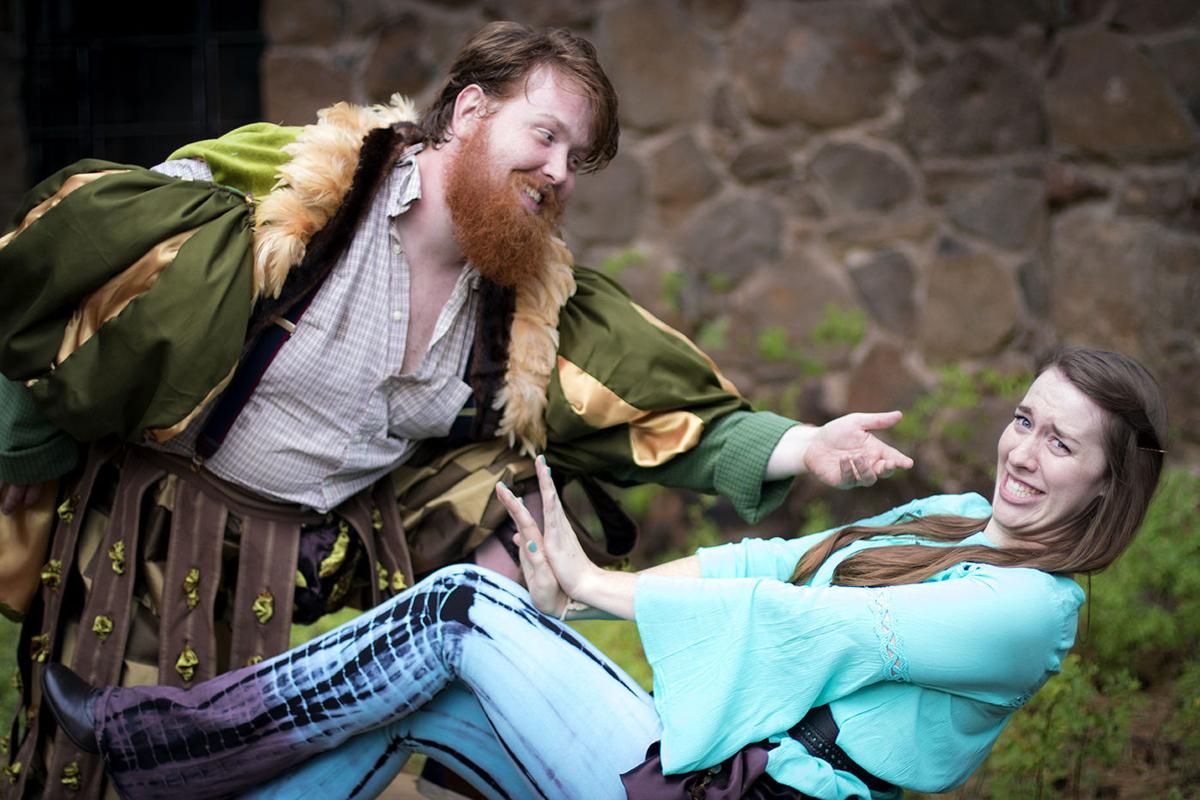 Alex Oliver (as Falstaff) and Cadence Lamb (as Mistress Ford) during rehearsal for the Flagstaff Shakespeare Festival's production of The Merry Wives of Windsor. Photos by Gean Shanks 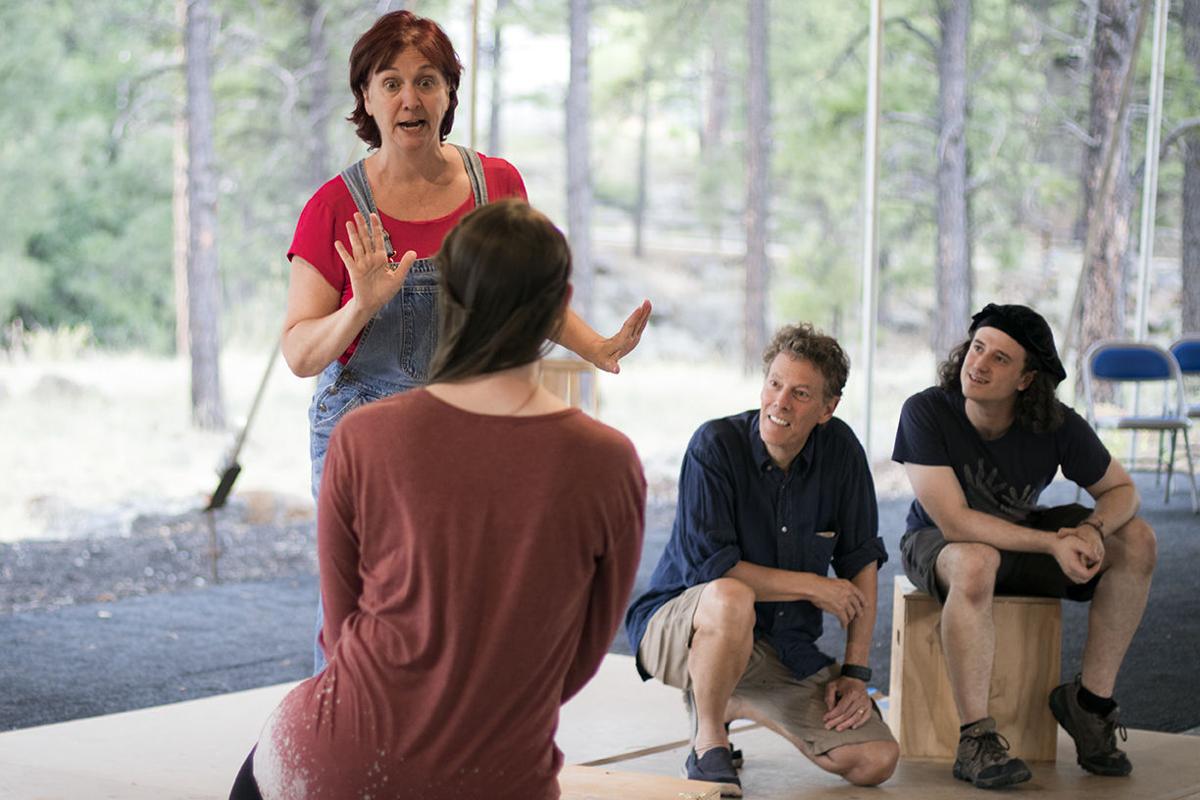 Suze St. John rehearses for her role as Mistress Page in The Merry Wives of Windsor.

Alex Oliver (as Falstaff) and Cadence Lamb (as Mistress Ford) during rehearsal for the Flagstaff Shakespeare Festival's production of The Merry Wives of Windsor. Photos by Gean Shanks

Suze St. John rehearses for her role as Mistress Page in The Merry Wives of Windsor.

The Flagstaff Shakespeare Festival is back for its third straight year, bringing back another season of comedy and tragedy to northern Arizona stages.

This year’s summer and fall productions will feature three female-driven plays and are spearheaded by the theme of strong, funny and clever women within the Shakespeare universe.

“When people think of women in Shakespeare they think of Juliet or Ophelia,” Festival Marketing Manager Nick Rabe says. “Those are famous female leads, but I don’t think they have ever been considered strong women. Our plays this year feature the strong and clever women of Shakespeare.”

Shakespeare’s plays frequently explore the idea of finding and losing love with a light-hearted comedy ending in a wedding, while his tragedies would end in the deaths of the two star-crossed lovers.

However, according to Rabe, female leads such as Juliet in Romeo and Juliet and Ophelia in Hamlet are slaves to love and steered by the men in their lives.

In The Merry Wives of Windsor, the women are the puppet masters, masterfully controlling the lovers and scoundrels that surround them.

The play features the “cheeky women of Windsor” as they cleverly plot to find, reignite, and maintain their romances.

Rabe says The Merry Wives of Windsor features two female leads played by Cadence Lamb and Suze St. John, who take control of their own destinies.

“The women in this play really end up driving the story,” Rabe says. “They are strong women who take action to fulfill their wants and desires.”

This year’s festival will also feature new stage design called “in the round,” meaning the play will be staged in the middle of the venue with the audience around the actors. The venue at the Museum of Northern Arizona will be outside under the museum’s big tent.

“We thought this would be a great way to try something different and create a new experience for theatre goers,” Rabe says. “It gives us a chance to use different angles and blocking.”

An afternoon of laughter will then switch to a night of tears as Macbeth makes its premiere in Flagstaff.

Rabe calls the selection of Macbeth “inspired” due to the fact that Flagstaff’s rendition of the play will feature a more modern version set in the 21st century, as well as give the audience an opportunity to experience the character of Lady Macbeth played by LaToshia Hill.

Rabe says selecting the classic tragedy is a chance to really wow the audience with a cast of complex characters, including Lady Macbeth, a woman who can be simultaneously perceived as evil and cunning or a tragic heroine.

“I think we are really taking some incredible chances with our selection of Macbeth,” Rabe says. “Lady Macbeth is one of Shakespeare’s strongest and most complicated characters. She is not simply a damsel in distress or a sex object.”

Following the two summer plays, the festival continues in mid-September with All’s Well That Ends Well, the story of an orphan daughter, Helena, as she plots to teach her unfaithful husband, Count Bertram, a lesson.

The classic comedy is being directed by Christine Schmidle, Deputy Text Associate at Shakespeare’s historic Globe Theatre in London, England.

The Flagstaff Shakespeare Festival has a close relationship with Schmidle due to her connection with another festival director, Dawn Tucker.

Tucker is also the director for the Merry Wives of Windsor.

“Christine and Dawn give us a direct link to the scholarship and style of Shakespeare,” Rabe says. “They are both friends and both studied Shakespeare. We have a personal connection with Christine and we are excited to work with her again.”

The third annual Flagstaff Shakespeare Festival kicks off with The Merry Wives of Windsor at the Museum of Northern Arizona, 3101 N. Fort Valley Road, from Fri–Sun, July 21–23. Performances are at 7:30 p.m. Friday, 7:30 and 2 p.m. Saturday, and 3 p.m. Sunday. A second round of performances takes place on July 28 and 29. Macbeth runs from July 29–Aug. 6 at MNAZ and the Coconino Center for the Arts, and All’s Well That Ends Well runs from Sept. 15–23 at MNAZ and the Arboretum at Flagstaff. Tickets to all shows are $10-20. For more details and to purchase tickets, visit www.flagshakes.com.