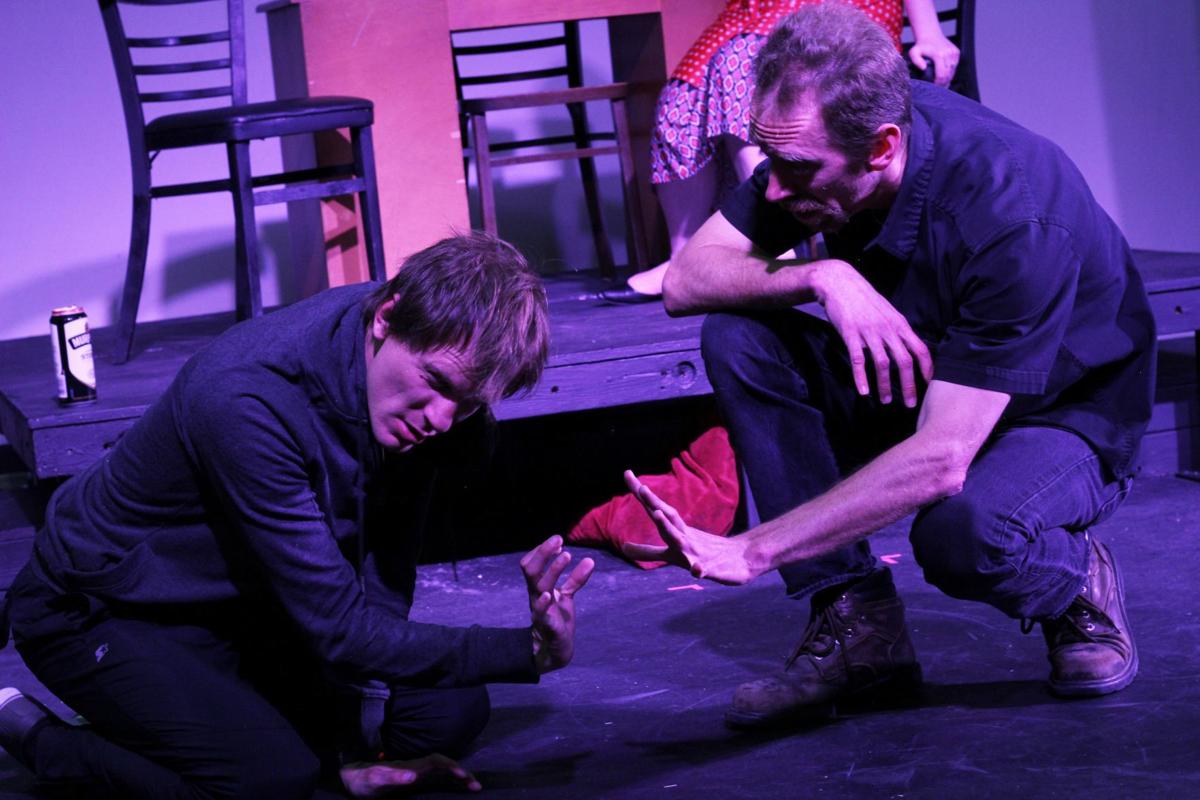 The Curious Incident of the Dog in the Night-Time opens at Theatrikos' Doris Harper-White Community Playhouse on Friday, May 31. Photos by MacKenzie Chase 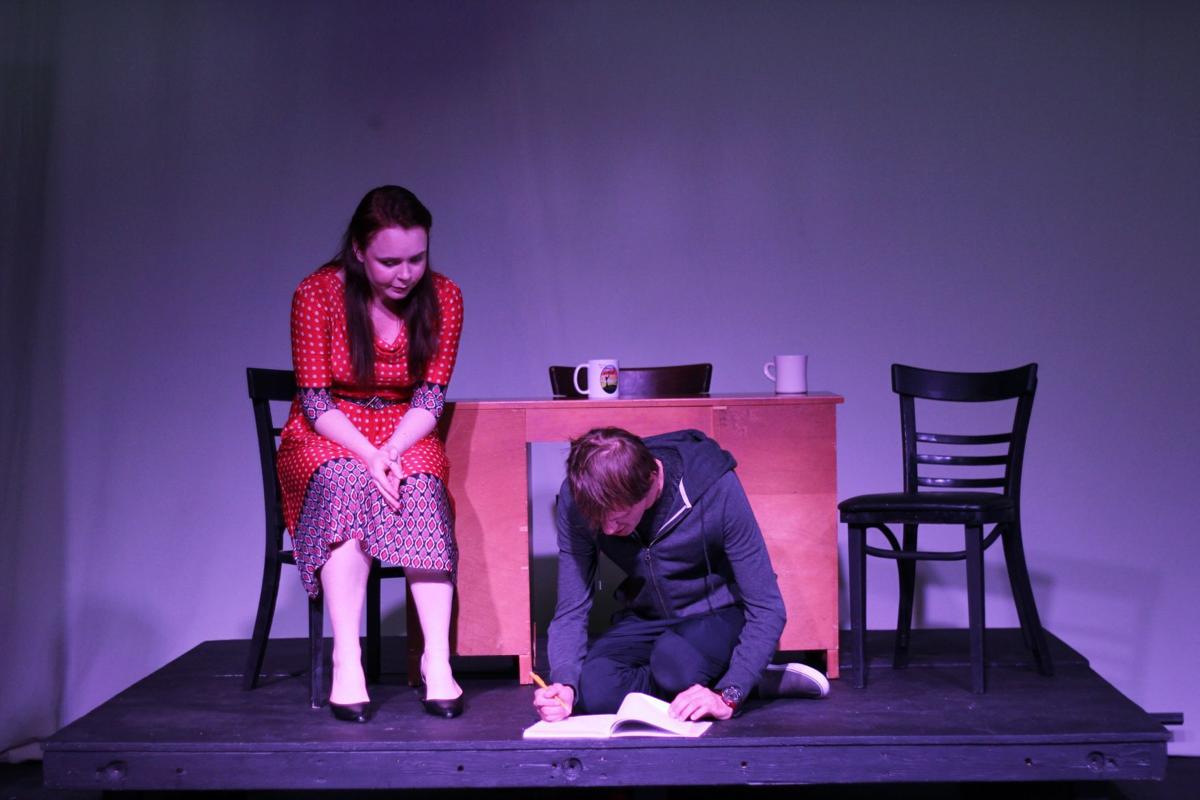 Siobhan, played by Audrey Young, works with Christopher, played by Jason Craig, as a guidance counselor at school and suggests he start writing a book about solving the mystery of Wellington's death. 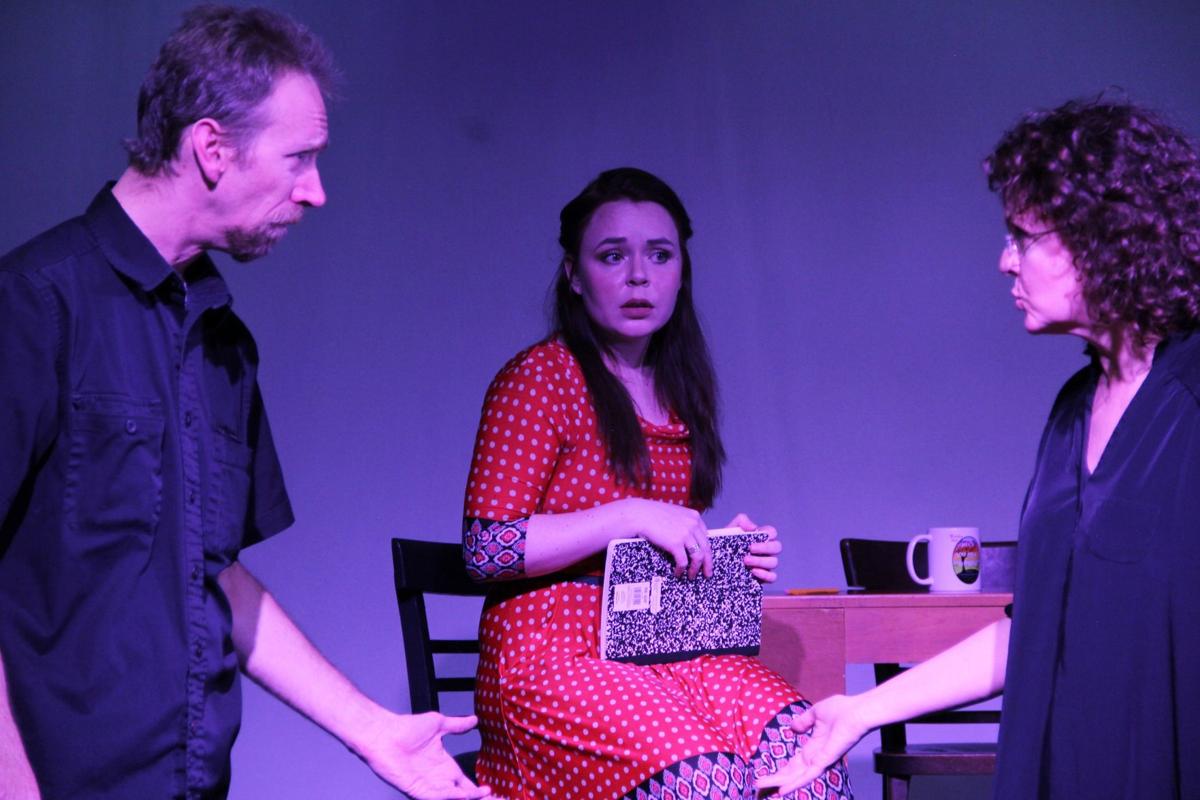 Much of Curious Incident is told in flashbacks describing the events leading up to Wellington's death, such as an argument between Christopher's dad and Mrs. Shears. 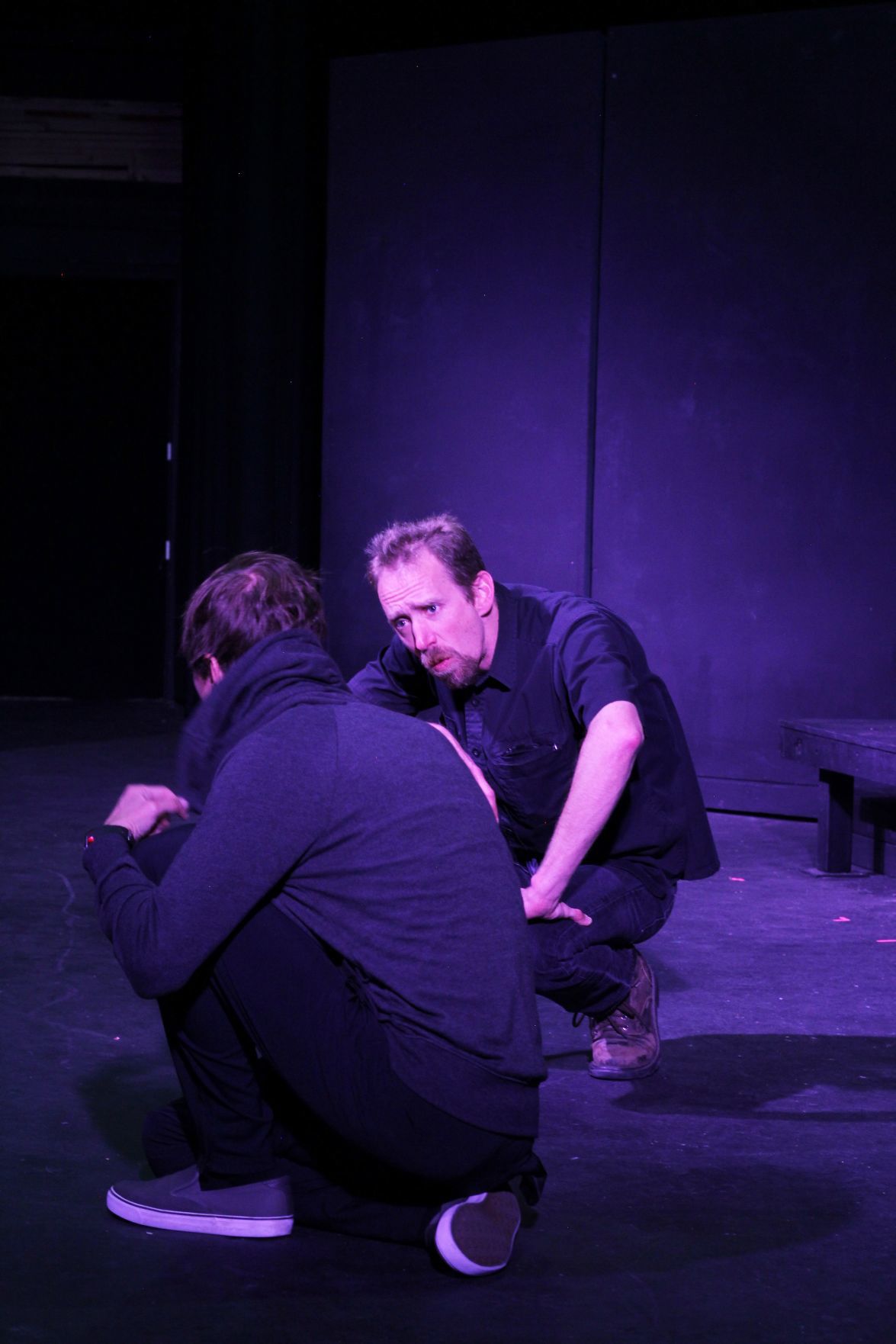 When Wellington, the dog, is murdered, it sets off a chain of reactions in a quiet England neighborhood. Teenager Christopher discovers the body, impaled by a garden fork on a lawn, and falls under suspicion. In order to clear his name, he decides to work the case as Sherlock Holmes might. While searching for clues, however, he stumbles across another mystery that changes the course of his life.

Based on the national best-selling novel by Mark Haddon and adapted by Simon Stephens, The Curious Incident of the Dog in the Night-Time tells the story of Christopher as he faces his fears to figure out who killed Wellington. Although it’s never directly mentioned in either the book or the play, Christopher seems to be on the autism spectrum.

The script provided co-directors Dani Commanda and Scotty Ballou with few blocking and set design notes, giving them instead a blank canvas on which to paint their own iteration of a beloved masterpiece. The result is roughly two hours of theater in which the characters come alive to tell a touching story of family and overcoming obstacles.

“That was our goal, we wanted this play to kind of speak for itself,” Commanda says.

Their version imagines Christopher’s world through moving set pieces as an ever-present narrator describes the thoughts in his head. He has trouble reading facial expressions, strongly dislikes the color yellow and being touched, and has a pet rat named Toby. He explains all of this in a book he’s writing about the mystery of Wellington’s death.

“This script has all of the dialogue and very little else,” Ballou says. “It tells you what has to happen, but, outside of that, it gives you the freedom to make it whatever you want, and the cast has been absolutely fantastic about really just taking these characters and making them their own.”

Theatrikos newcomer Craig takes on the lead role. He saw the Broadway production in New York and then twice more as a traveling show, and says Christopher was a sort of dream role for him.

“When I first saw this show, I went home and wept for like three days because I thought, ‘I will never have the opportunity to play this role,’” he says. “But here it is, and now we’re doing it.”

Craig entered the world of professional acting when he was 14 and performed all over the country before he decided to retire two years ago.

“I knew that I wanted to get more connected with the community,” he says.

He moved to Flagstaff in January to be closer to his family and became involved with Theatrikos as a volunteer before being given his role in The Curious Incident, a decision which was immediately apparent to the directors.

“From the moment he walked into auditions, it was like, ‘Yep, that’s him,’” Commanda says.

In preparing his character and researching cognitive diversity, Craig said he came across a video on YouTube in which someone explained, if you meet one neurodivergent person, you’ve only met one.

“It’s the very same with this show. There are some shows that you can see [produced by different companies], and you’re going to see the same show over and over and over again,” he says. “You see Curious Incident, you’ve only seen it once, you know. That’s how much freedom is in it.”

Commanda mentions a mutual friend of hers and Ballou’s who is producing the same play in Missouri.

“All the pictures that he’s been posting up, it’s so different,” she says. “They took everything in a completely different direction.”

Craig plays Christopher’s nervous ticks with the understanding that this is just who the character is—there’s nothing wrong or worth pitying in his actions, whether Christopher is groaning on the floor when he’s overwhelmed by a new situation or environment or hitting a police officer who touches him without permission.

“I feel like more and more pieces that handle this subject matter, it’s all about the disorder,” Craig says. “To have a piece where it’s not, they don’t even discuss it, they never mention it once, there’s something really powerful about that.”

“I’ve been with Theatrikos for 10 years, and this is easily one of the most unique pieces we’ve presented,” Ballou adds.

“We just hope that everybody walks away from this show thinking about what they’re capable of as their own person after watching Christopher’s transformation,” Commanda says.

Theatrikos’ production of The Curious Incident of the Dog in the Night-Time opens Friday, May 31, at 7:30 p.m. and runs through June 16. Friday and Saturday shows begin at 7:30 p.m., with matinee performances Sundays at 2 p.m. A reception with the cast will follow Friday’s opening performance. The show has also added an extra performance on Thursday, June 13, at 7:30 p.m. Tickets are $22-$24, plus applicable fees. Visit www.theatrikos.com for more information.

The Curious Incident of the Dog in the Night-Time opens at Theatrikos' Doris Harper-White Community Playhouse on Friday, May 31. Photos by MacKenzie Chase

Siobhan, played by Audrey Young, works with Christopher, played by Jason Craig, as a guidance counselor at school and suggests he start writing a book about solving the mystery of Wellington's death.

Much of Curious Incident is told in flashbacks describing the events leading up to Wellington's death, such as an argument between Christopher's dad and Mrs. Shears.