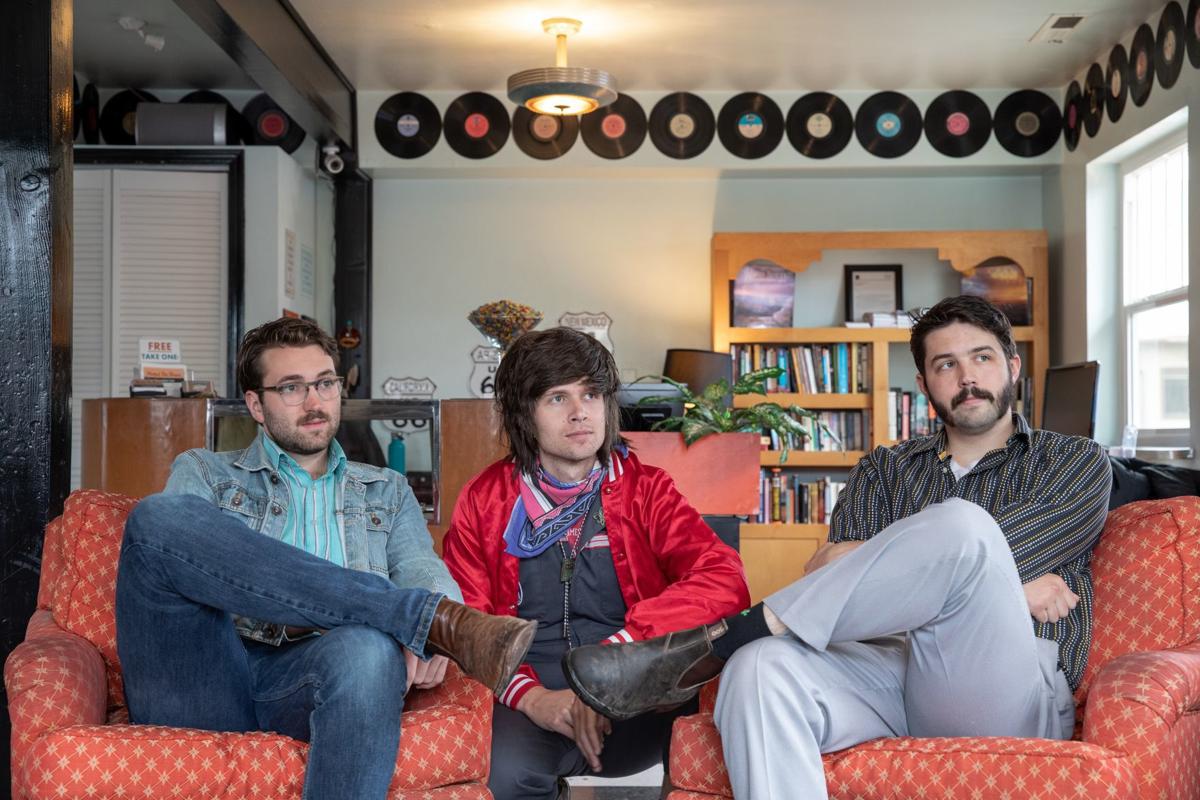 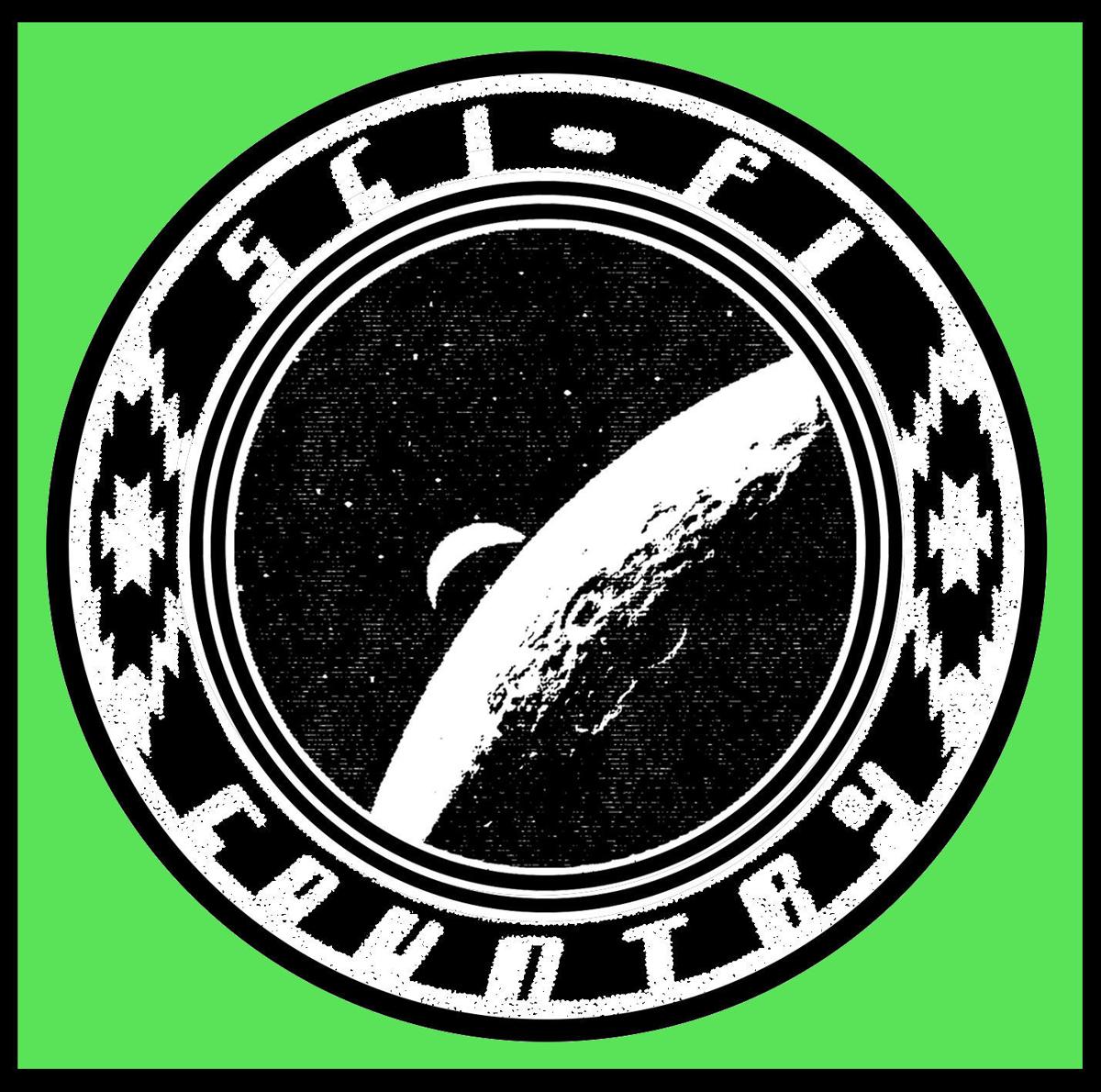 For Sci-Fi Country, everything began with a bolo tie. It’s an origin story fit for three otherworldly cowboys whose music conjures desert, outlaw country and the unusual phenomena it plays host to: UFO sightings, highways stretching and bending without end, cosmos, psychedelia.

Benjamin London (guitar/vocals) was walking the Rio Grande Gorge Bridge, just outside Taos, New Mexico, the water rushing 600 feet beneath him as vendors sold their artwork. He bought the bolo tie for $10. It was at once an old computer chip and an adjustable piece of jewelry so inextricable from the Southwest, technological green and gold paneling set into silver.

It was sci-fi and cowboy all in one, Tre Hibbert (drums/vocals) proclaimed.

The band, made up of London, Hibbert and Quinn Scully (bass/vocals), released its first EP Nov. 1. Titled simply SCI-FI COUNTRY EP, the release is a gauzy monolith of four songs, each of which is a tiny tome built by effects that shimmer and warble alien-like over a quick undercurrent of old country music ballads and psychedelic ‘70s rock ‘n’ roll. Sci-Fi Country oozes a mars-meets-Arizona land and soundscape; Scully references Woody Guthrie lyric-wise; London, Bob Dylan—with a hint of The Beach Boys-meets-space rock pop.

“When we say country, we kind of mean psycho country, which was really just a bunch of rock bands who flirted with the idea in the '70s,” Hibbert says.

“There are some synth parts, which I think adds to the dreaminess of it,” London says. “It’s that kind of warble-y tape sound and the laser beam sounds, too. It’s basically taking a normal song and turning it into something with a soundscape. Taking it down to the bare bones but adding those elements to it. It’s a lot of fun and, musically, super gratifying.”

The end result is something one might easily find in David Lynch’s most recent Twin Peaks reboot, to be heard as bad Special Agent Dale Cooper (Kyle McLachlan) speeds across the open deserts of Nevada, all things extraterrestrial at his back and humming in the air like a mirage.

Though London and Hibbert played under an earlier version of Sci-Fi Country while living in Los Angeles last year, it didn’t fully form until Scully  joined in January. Since then, things have moved at lightning speed for the band, with the EP’s recording at MOCAF taking a little less than four weeks. Each band member has at least one if not several side projects, London simply as Benjamin London, Scully and Hibbert with Quinn and the Confluence, and yet so much energy was channeled into the recent record.

“It’s just really fun and it’s nice to take a step away, [from Quinn and the Confluence]," Scully says. "Even though we have a lot of collaboration, it kind of sucks to be Quinn sometimes. I get tired. I’ve really enjoyed this making songs together effort."

It helps that each member works well together, Scully says. London composes the songs acoustically then Hibbert adds his drum parts, which are constantly in movement, launching the song from moment to moment. They then work as a trio to electrify them, literally and figuratively.

“I don’t think it’s quite as complex as some people might think, though. It’s like, ‘OK, let’s do this because it sounds like lasers, and lasers are tight,’” Scully says with a laugh. “It can also be challenging getting the right sound, though. It’s very unique and I don’t think a lot of people are intentionally making space noises. It’s not easy to get it right immediately. We’ve done it wrong a few times.”

Each has known one another for some time. Hibbert and Scully went to school together before playing in Quinn and the Confluence. London and Scully’s uncles formed Sloe Elk in the ‘90s, a well-loved Flagstaff band at the time. It’s clear they’ve known each other for a while now, something that infuses the record at every juncture.

Sci-Fi Country will play at Firecreek Coffee Company, 22 E. Route 66, on Saturday, Nov. 23. The show begins at 7 p.m. It will be the band’s last show of the year so come on down. Sci-Fi Country will share the bill with openers Mr. Cool, '90s-esque garage rock form Prescott and YEESH!, the side project of Eli Katz (Tiny Bird) and Tre Hibbert—a project the latter describes as John Waters meets David Byrne and something else we can’t remember. Tickets are $7. For more information, visit https://www.facebook.com/events/780804305722915/

The Benders Band recorded its first two albums crowded around a single microphone. It was the early 2000s and the bluegrass/Americana group wa…