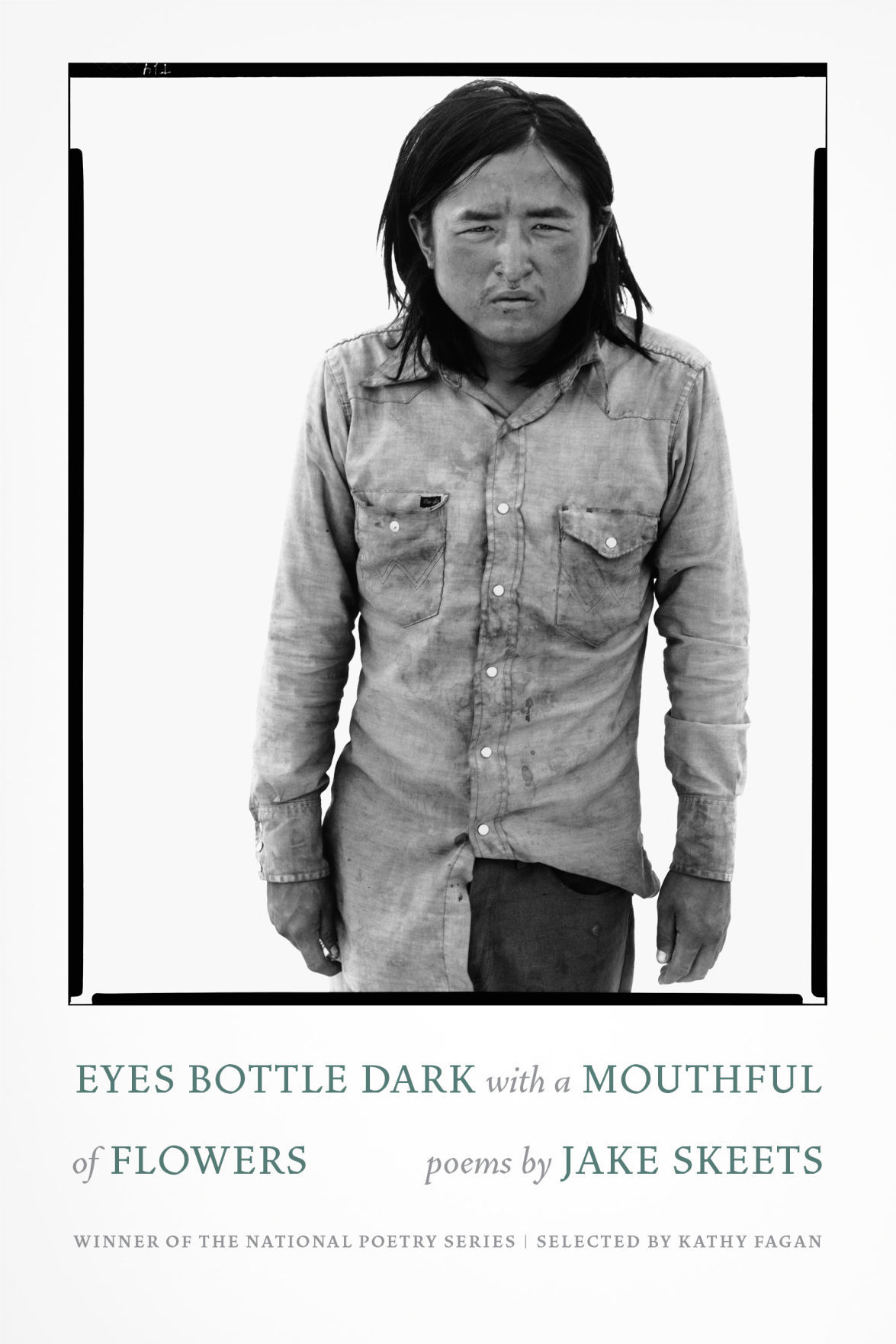 Eyes Bottle Dark with a Mouthful of Flowers by Jake Skeets. Courtesy photo 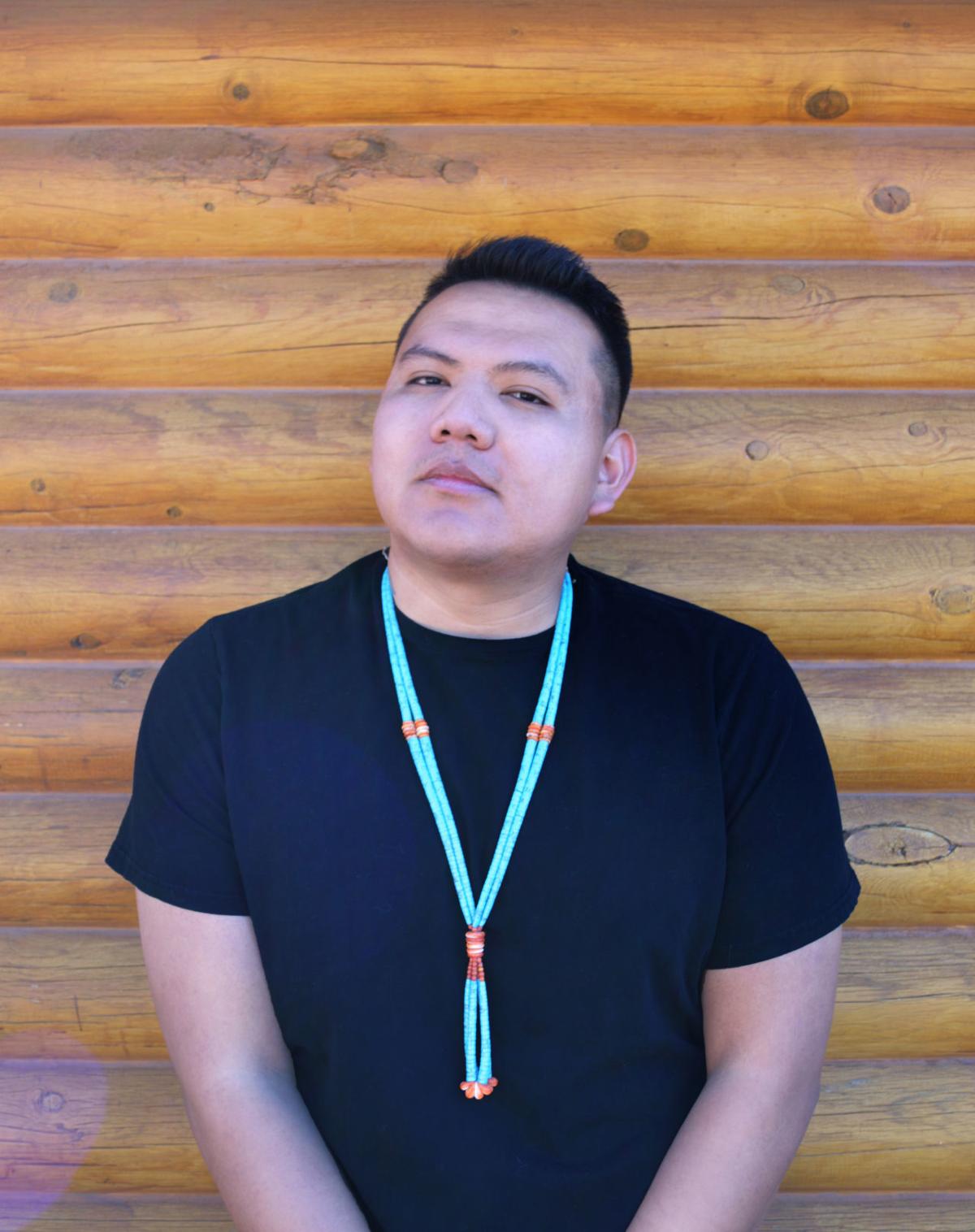 Jake Skeets is a Diné poet from Vanderwagen, New Mexico. His debut poetry collection Eyes Bottle Dark with a Mouthful of Flowers was published by Milkweek Editions was published Sept. 10. Photo by Quanah Yazzie

Tender and heavy, like breathing while sitting in a burning room, Eyes Bottle Dark with a Mouthful of Flowers, published by Milkweed Editions, is a fierce collection of poetry by Diné poet Jake Skeets. Unafraid in subject matter, language and breath, Skeets’ debut collection begs you to sit and look at the viscera of the West.

A 2018 National Poetry Series finalist with an MFA in poetry from the Institute of American Indian Arts, Skeets’ work has been produced and mentored under poets like Sherwin Bitsui, Joan Naviyuk Kane and Santee Frazier who helped hone his playful and skilled manner of space and imagery.

This collection takes place in Gallup, New Mexico—nicknamed “The Indian Capital of the World” and “Drunktown” wherein the real West reveals itself as complicated by the people who inhabit this space, its landscape and its violent history. Boys become men, cornfields burn and we learn to siphon—gas, oxygen, intimacy. “Boys are often the wind/ always a howl.” Skeets steeps this book in relation to and the importance of his Navajo history and Gallup, just north of where he grew up.

“Indian Capital of the World” encapsulates Skeets’ style: Immediate, lyrical and playful. As the world erodes around people entangled in violent and tragic cycles—alcoholism, depression—so does the poetry. Structurally, the visual representation of these poems is just as integral to what they accomplish at the thematic level. In this poem, Skeets uses repetition to reinforce the image of bodies being found around town in fairly public and barren places. The text begins to overlay the words “man found dead in a field” until the sentence is visually unable to hold the words together and breaks apart as it heads toward the bottom of the page.

The title poem, however, works toward your ears—a skill that pervades each poem throughout. Skeets’ attention to words moves within syntactical and out as audible sounds. He creates a sound, a train chugging toward a young man walking the tracks:

as the kid heard the air horn

he listened to train tracks

A reclamation of a once idealized and romantic Western America, Skeets reminds us the West is more than what we were shown on television. Corn beetles, Spider Woman and cholla flower.

On the cover, Skeets’ uncle Benson James, who is mentioned periodically throughout the collection, is shown clenching a dollar bill in his hand against a white backdrop. The photo, “Drifter,” is part of Richard Avedon’s photo collection. The source of this image and the image itself is important to the narrative of men and the city in which Skeets’ words float. This is a narrative, a fragmented life, a binary of being opposite the idea of erasure—like the white backdrop against Benson. Skeets places emphasis on reclaiming this image, reintroducing his uncle in the context of Gallup and his family rather than the Avedon photo that crops out everything.

Family, boyhood and queer eros are in play here. In the unforgiving mess of life, Skeets shows us beauty.

Eyes Bottle Dark with a Mouthful of Flowers is available at Bright Side Bookshop, 18 N. San Francisco St., and at www.milkweed.org. Jake Skeets will be reading as a part of the Northern Arizona Book Festival on Saturday, Sept. 14, at Bright Side from 6:30- 8 p.m. with Craig Childs.

Eyes Bottle Dark with a Mouthful of Flowers by Jake Skeets. Courtesy photo

Jake Skeets is a Diné poet from Vanderwagen, New Mexico. His debut poetry collection Eyes Bottle Dark with a Mouthful of Flowers was published by Milkweek Editions was published Sept. 10. Photo by Quanah Yazzie