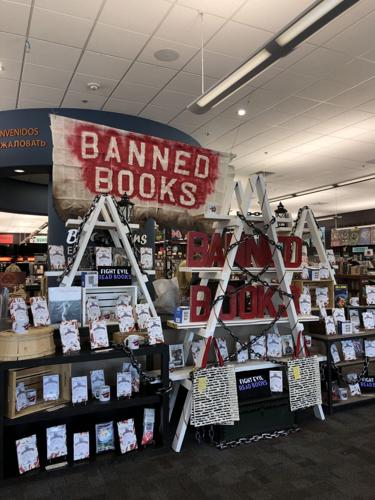 Bookmans celebrates Banned Book Week with a display of banned books and other media. 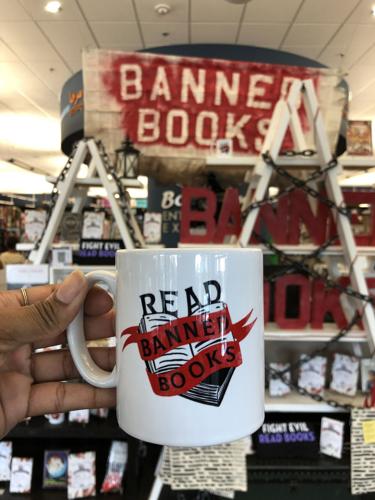 You can purchase and go on a "blind date" with a banned book.

Within the last few years, the idea of banning books has been a hot topic. Just last month, a Texas school district was under fire after Keller Independent School District outside of Fort Worth, Texas sent out an email to their staff ordering them to pull copies of a list of more than 40 books from classrooms and school libraries. The internet went wild. In March 2021, the production of six Dr. Seuss books were halted due to racist imaging. Even though recent topics have sparked a fire under the discussion of banning books, books have been banned in America as long as ago as 1637.

Bookmans Entertainment Exchange is an independent bookstore chain, with locations across Arizona. Each year, they excitedly celebrate Banned Book Week, just as they do any other week in the year. Amari Baker, Bookmans Entertainment Marketing Coordinator, said Bookmans is dedicated to keeping banned books available to their community. Banned or challenged books promote censorship, and often are seen as offensive due to topics of racism, sexuality or gender identity.

“Bookmans as a whole promotes banned material,” Baker said. “This means we sell it, promote it, display it, we encourage it and you’re able to buy it from us. Though, specifically, during this week, we have a large display about it. We grabbed all of our banned books and wrapped them, so it’s kind of like a blind date with a banned book.”

Baker said the value of reading banned books, whether they are genuinely offensive, is the opportunity to expand your mind and read about other worldviews. Often, even within children’s literature, they are a teaching opportunity.

“With a lot of banned material, they have opposing ideas than what everyone is used to,” Baker said. “When you have material that has these new thoughts and goes against what the majority thinks, it sparks controversy. We’re so used to having the same content given to us year after year in school, or just having the same conversations about literature, so when you’re able to speak about something that sparks inspiration or makes you think about the world, it’s controversial.”

Bookmans isn’t the only Flagstaff book establishment ready to celebrate Banned Book Week in Flagstaff. Flagstaff Public Library actually has its own Banned Book Club, which will be meeting to celebrate the week. On Sept. 22, 6 p.m., they’ll meet to discuss Ray Bradbury's “Fahrenheit 451.” Mary Corcoran, Programming Librarian for Flagstaff Public Library said that it’s not necessarily important to read banned book because they are banned, but instead to look at the way banning books impeaches on our freedom.

“I personally don't think it is important to read banned books, as they are not automatically more important or better written than any other books,” Corcoran said. “A ban tends to create a mystique around a book that is not always deserved. Instead of raising banned books onto a pedestal as something important for their content, we should highlight them as examples of some people trying to strip away the freedom of intellectual curiosity from others.”

Corcoran said that the fight against book banning has less to do with the books themselves but with the fight for free speech and free press. When celebrating Banned Book Week in September, Corcoran wants Flagstaff readers to challenge new ideas and thoughts.

“The solution to harmful speech is to dialogue and argue with good speech,” Corcoran said. “The solution to a bad book is a good book. If there is a book at your library that you find reprehensible, request a book that counters those ideas. Now, everyone can read both books and decide for themselves what to believe. If it's something in the children's section that you disagree with, talk to your kids about why you think it's wrong. Talk. Speak. Read. Stifling speech and banning books solves nothing. Only by putting all the ideas and books out there can we, as individuals and as a society, sift through them to find the truth.”

Bookmans celebrates Banned Book Week with a display of banned books and other media.

You can purchase and go on a "blind date" with a banned book.