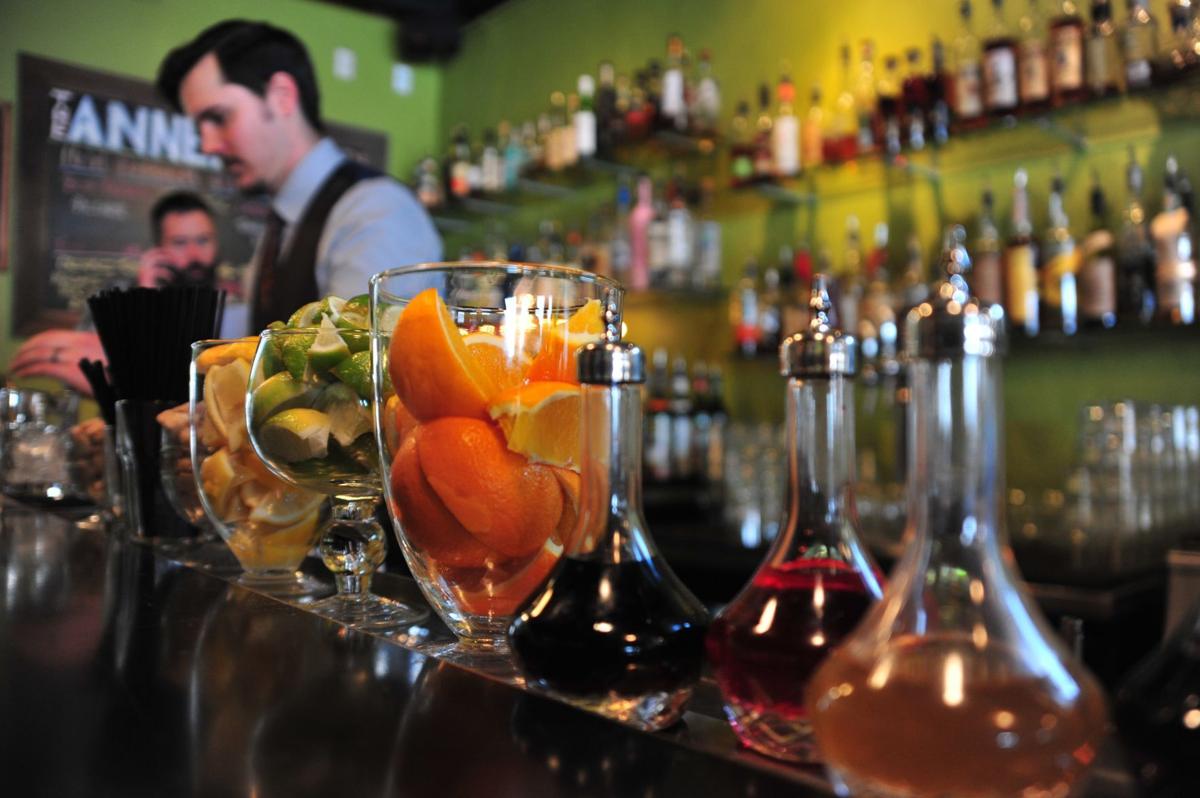 A look down the bar at The Annex Cocktail Lounge. 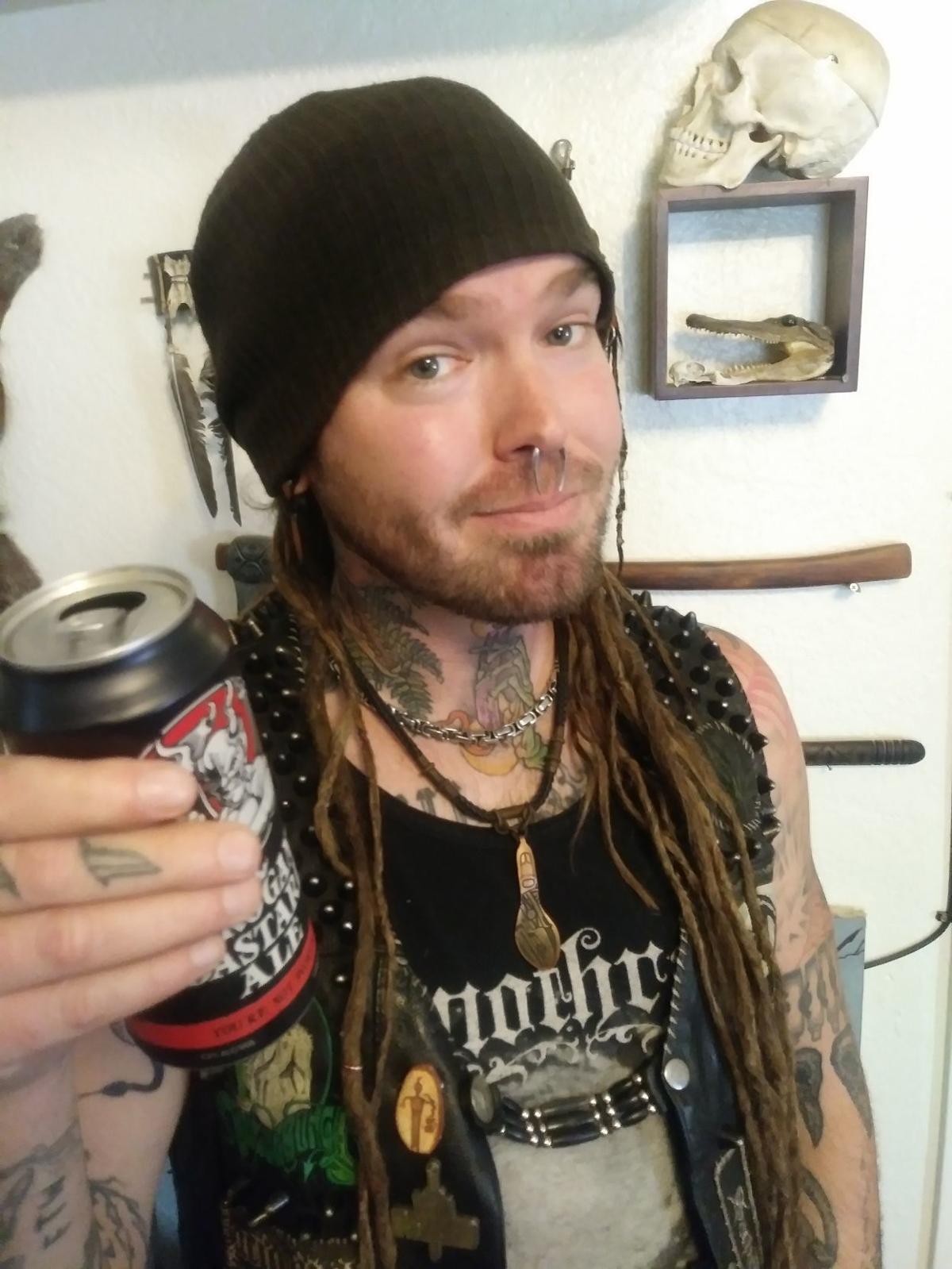 Another year is winding down and the freaks and geeks of the Masters of Brewtality crypt couldn’t be happier to start throwing dirt into the grave of 2021. We’re not much for actually keeping to tradition down here, so we’re going to break from the usual formula and do a little feature on this year’s Best of Flag winner for Best Cocktail Bar – the Annex! We’ll be the first to admit that we’re not much for liquor, as we’re generally more about the long game when it comes to drinking. Hours of drinking beer works wonders on the mind and soul while hours of liquor just ruins your life in every possible way. And last night at the Annex proved that beyond a doubt.

Our bartender was Sarah and she was fantastic.  Anytime you’re getting a cocktail from a bartender immaculately rocking suspenders, you know you’re in good hands. We had two drinks, which we’ll get into later, and wound up feeling delightfully toasty… That’s right, folks – TWO DRINKS! That hasn’t happened to most of the Masters of Brewtality staff since high school….

First off though, the nuts and bolts of the restaurant. The ambiance and decor of Annex is equal parts minimalist and chic, and we’re always hesitant to use the term “hip” as it's been diluted into an absolutely meaningless buzzword, but it still feels right applied here. They hit all the right details, from the leather-bound menus to the bathrooms that make you feel like you’re in some kind of film noir classic. The patio is one of Flagstaff’s best regardless of rain, snow, or shine thanks to abundant canopies and mood-enhancing fire pits.

And the food. It’s almost unfair that we get to snack on dishes this decadent as often as we do. We’ll admit that we can indeed be picky eaters down here in the crypt, but Annex is the kind of place where we just don’t ask what’s in it and it works out every time. The appetizers have been a consistent favorite and we can’t seem to stop crawling back for the brussel sprouts whenever we’re in. Bacon, lemon and thyme vinaigrette, and just enough truffle to make feel like a walking Rolex watch, these slay so hard. Right behind on our list of favorites is the Sun-Dried Tomato and Olive Tapenade with roasted garlic and goat cheese and Crab and Artichoke Fritters. Both dishes will blow your taste buds through the bottom of your tongue, out your jaw and splatter them on the floor. In a good way, of course. They used to do these insane deviled eggs and, perhaps, with the power of the Masters of Brewtality readership, they will again! We’ve just been falling to our knees and weeping at them. Maybe you can try that, too.

Finally, the shining star…. Cocktails! The first we sampled was the Time Flies. If a good cocktail takes your senses on a journey, this one would be akin to the walk the Hobbits did during the “Lord of the Rings” trilogy. It just didn’t stop! High-end Japanese whiskey, scotch, rye, bourbon, Italian vermouth, bitter almond cherry and a dash of mole made for a drink equal parts strong and approachable. It’s ideal for fans of the classic Old Fashioned with a contemporary twist. While a fine whiskey is always something to be appreciated, we’re more fans of rum down here.  Sarah recommended the City Lights, a brilliant combination of Venezuelan and Jamaican rums, scotch, vermouth, amaro, sherry and cinnamon smoke. Call us suckers for spectacle, but anytime a bartender busts out a blowtorch and starts burning things right in front of us, we just melt with joy. The execution was immaculate, too.  You’ll often find people get a bit slap happy with the smoke, but there was just the right amount to kick the flavor from sweet to classy. I’d pair this cocktail with a smoking jacket, a fireplace-lit study and an epic Caribbean storm raging outside the window. Just unbelievable.

Things got a little confusing after that and we had to slink back to the crypt to begin preparation for a gnarly hangover. As we said, we usually don’t do liquor and it’s glaringly obvious when it's going to take a toll. 10/10, would do again though!

Happy New Year from your freaks at Masters of Brewtality! Now, drink up, my fiends!

Mike Williams (your titular Master of Brewtality) is a humble tattoo artist, egotistical writer, relentless beer drinker, unrepentant Hellraiser and connoisseur of all things Doom Metal. You can find him slinging ink at Flagstaff Tattoo Company or at some bar downtown.

Growing up and out: Dark Sky Brewing makes room for new beer garden

Larami and Ryan Sandlin, co-owners of Dark Sky Brewing Co., watched their neighboring building for years. The space at the corner of Birch Ave…

A look down the bar at The Annex Cocktail Lounge.