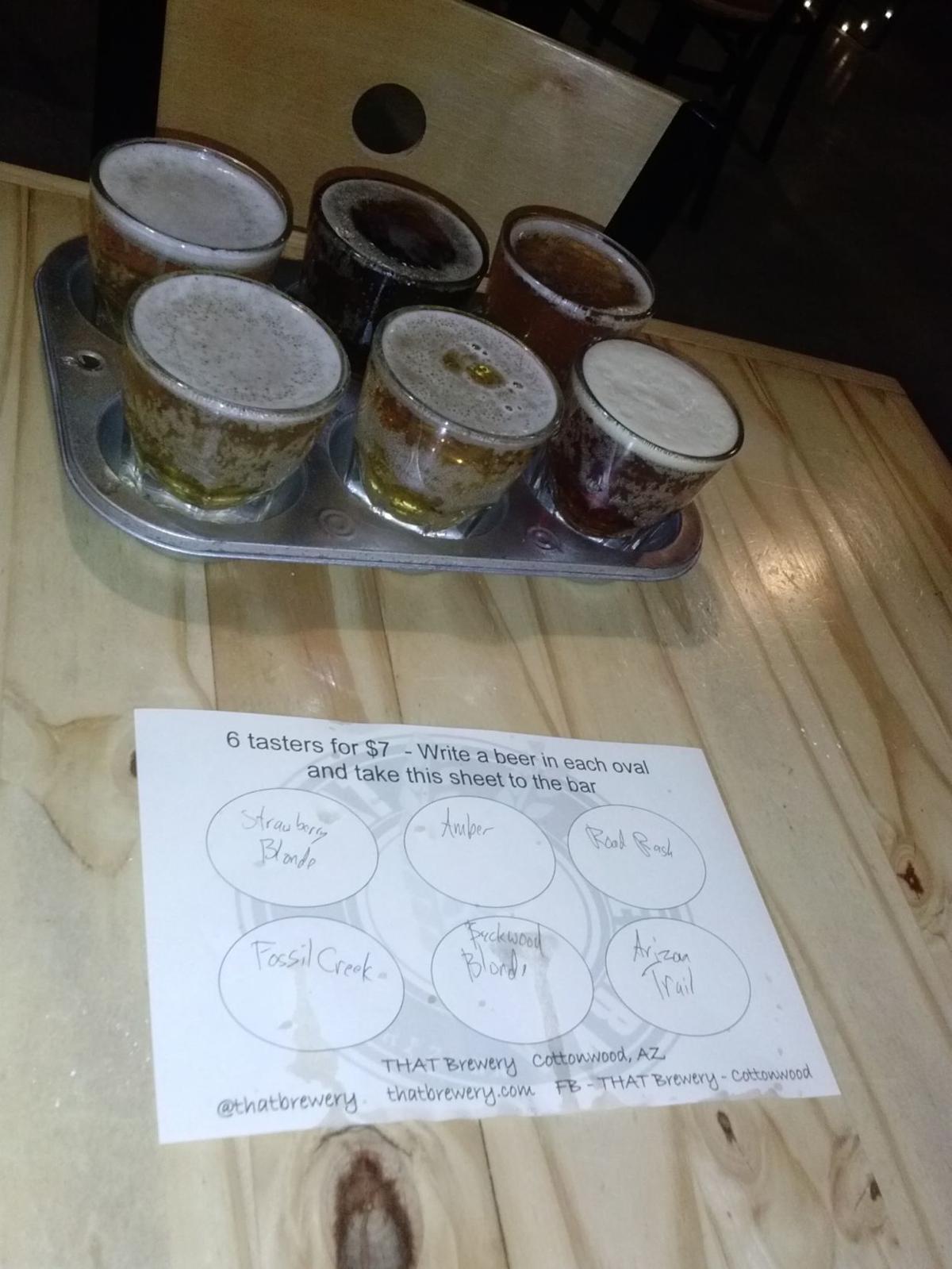 Beer sampling at THAT Brewery in Cottonwood. Photo by Mike Williams 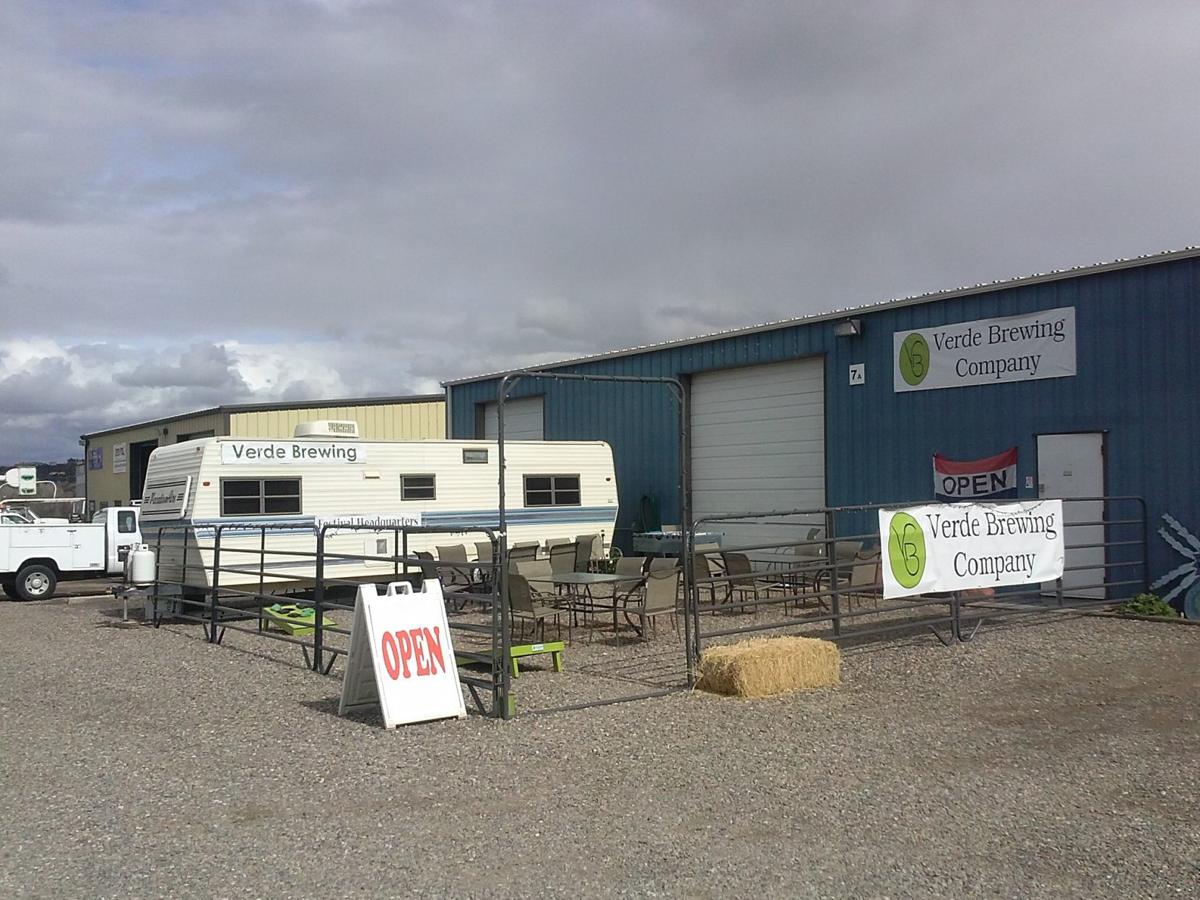 This month, in a very special Masters of Brewtality, the assorted ghosts and ghouls responsible for the column braved a furious blizzard and flurried rainstorm to head down the mountain in search of sun and new craft breweries. Our journey took us past spun-out semis, abandoned rest stops with mummified deer carcasses, lightning strikes, tire blow-outs at 75 miles an hour, missing elk at 85 miles an hour and an ancient gyspy’s curse so unspeakable, we can’t talk about it. Like, at all. Once our unholy caravan made it to Camp Verde though, things lightened up significantly as the weather shot up a solid 20 degrees and the sun came out. It was a beautiful day to do some serious drinking.

Our first stop was Verde Brewing. It’s the kind of tucked-away place you can only find by following a series of easily missed signs and landmarks, which, as dedicated questers for new suds, warmed our frozen hearts. Heading down the I-17 from beloved Flagstaff, there’s a quick mention just past the casino advertising that there is, in fact, a brewery in Verde Valley. Take the proper exit and, from there, the world’s largest Kokopelli will be the gatekeeper as you arrive at the promised destination. The brewery itself is nestled in an industrial lot about an eighth of a mile back in a retrofitted warehouse surrounded by welding shops and propane distributers, which makes for a great salt-of-the-Earth crowd after five o’clock.

Being dedicated booze hounds, we showed up around one on a Tuesday afternoon, and the place was quiet except for the brewer, the cook and a couple other thirsty travelers. The food smelled amazing and featured a solid variety of bar staples like slow-roasted pulled pork, a roast beef sandwich simmered in their Bullpen Bourbon Stout, beer bratwurst, smoked turkey sandwiches and hot dogs the size of large cucumbers. Pro-tip: skip the chain restaurants that greet you as leave the freeway and just head straight here.

Naturally, the star of any brewery should be its beer, and Verde Brewing has some shiners. In proper Masters of Brewtality fashion, we started sampling at the beginning of their menu, finished up at the end and hit the middle right between. They proudly advertise being a “Farm to Mug” brewery, and the dedication to local, fresh ingredients—including honey from Verde Valley bees—comes through immaculately in the final product. One standout was their Scotch Ale, a rare example of a balanced flavor profile in that style. So many others overkill on the Scotch, but this brew left it toward the back end in favor of bringing rich caramel, sweet honey and a pleasant malt to the forefront—easily one of the most drinkable Scotch Ales in this half of the state. The close second favorite was their Off To Jail Pale, a refreshing, light ale with a whisper of citrus and a solid undertone of orange blossom honey. Just when you thought the style couldn’t go anywhere else, something like this comes out of left field. Once again, everything here was great, and it’s a must-visit as you’re passing by.

A little beyond Camp Verde in Cottonwood, we hit That Brewery next, and it was a delightful polar opposite of Verde Brewing’s nano-brewing set-up. This place was right decent sized! Huge mash tons and fermenters filled this spot, which was also pleasantly off the beaten path. Before we get into the beers, which were all fantastic, we need to spotlight their green-ness. There are too many details to list for the purposes of our humble column, but, holy Hell, they are thorough. From upcycled decorations, donating used grains to farms and pet food suppliers for dog treats, low flow toilets and even recycling kitchen oil for biodiesel fuel, That Brewery is on it. The standout beers here were the blondes—even for non-beer drinkers, they were hits. The Strawberry Blonde was light with a strawberry nose right out of the gate that followed up with more subtle, refreshing notes of vanilla, lilac and hibiscus. A perfect drink for a warm day! Now, we generally turn our noses up at session beers as Masters of Brewtality come to party hard, but their Fossil Creek IPA was a head-turner. At 3.9% ABV, the citrus and tangerine flavors are classic, but what really jumps forward is a totally unexpected rush of grapefruit. Everything here was fantastic from the brews to the free popcorn to the hilarious staff. All in all, Masters of Brewtality give the Verde Valley a 666 out of 666. Cheers!

Beer sampling at THAT Brewery in Cottonwood. Photo by Mike Williams