Become a Member
Read Today's E-edition
Share This
Master of Brewtality: The chilling return of Dapper Dre
0 Comments
Share this
1 of 2 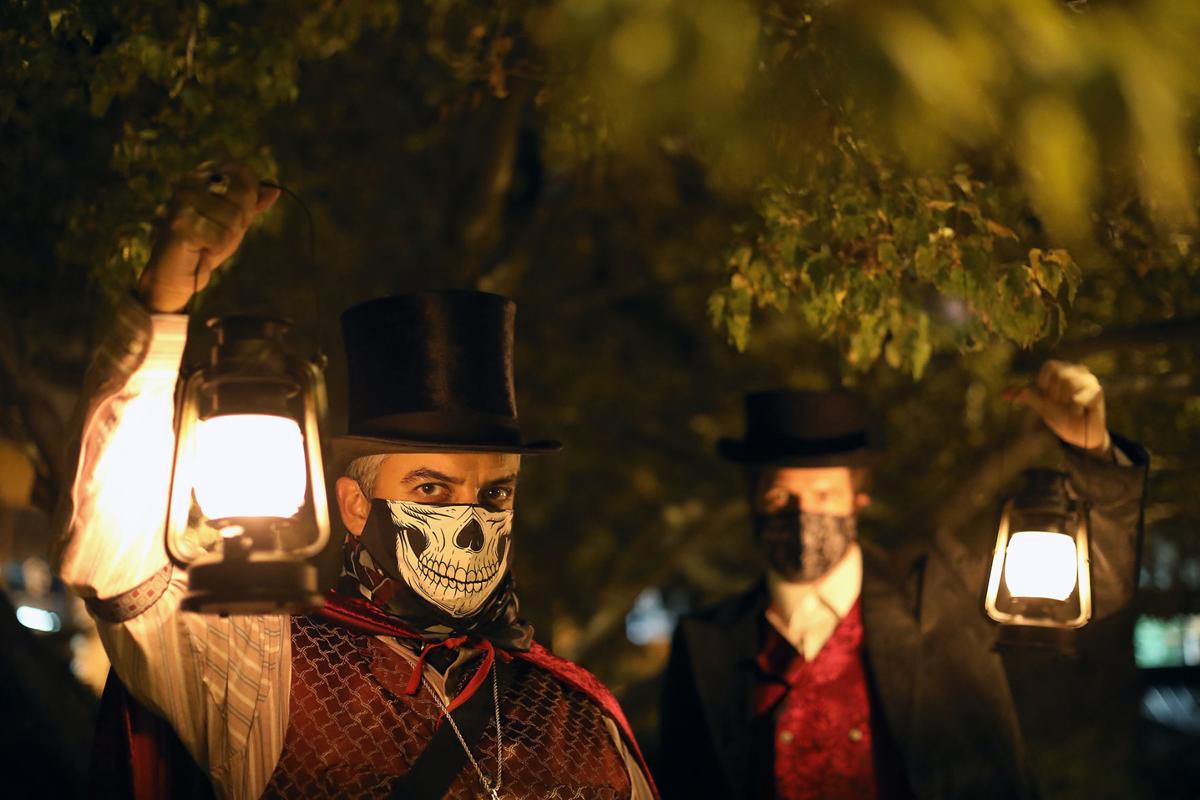 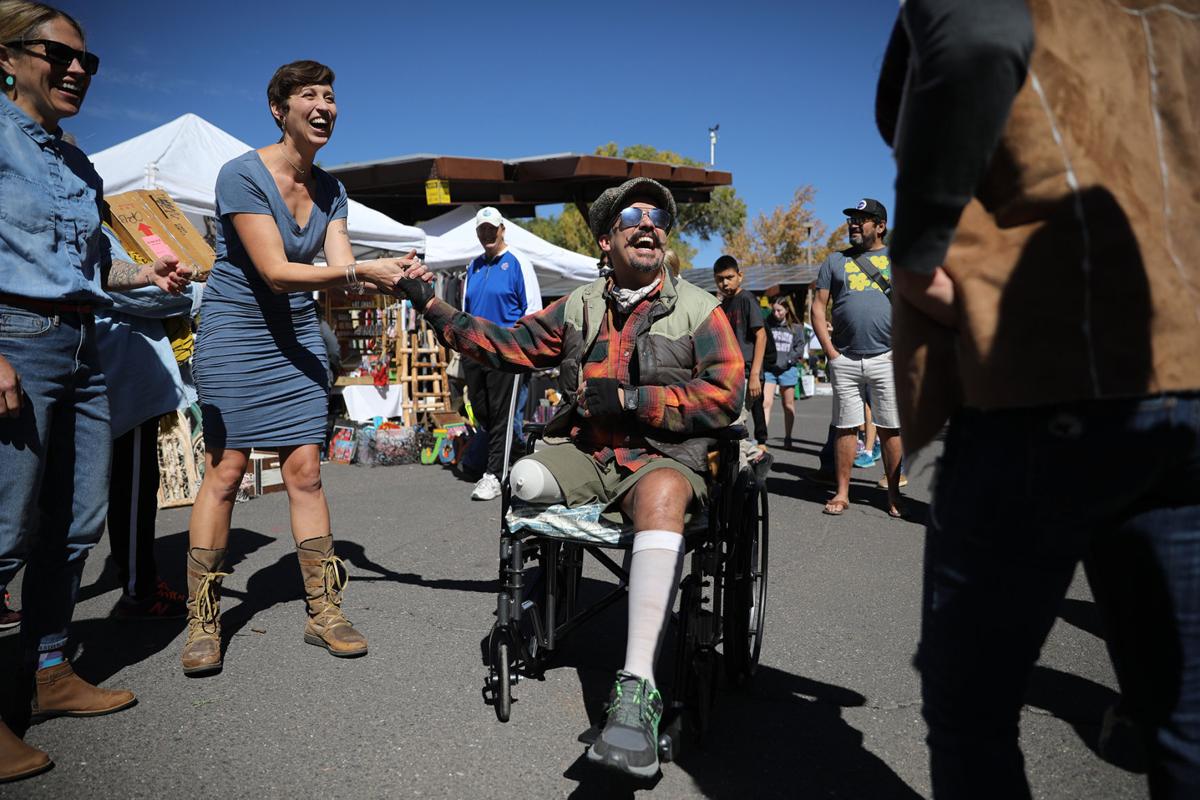 Andres “Dapper Dre” Adauto laughs with friends as he returns to the Flagstaff Urban Flea Market in October 2021. It was the first time that Adauto, who is co-owner of the market, had been back since being critically injured when a tow truck drove into the Flagstaff Bike Party in May.

It is official, boils and ghouls…. We’re halfway through the holiday stretch.  With the crowd favorite Halloween behind us and Thanksgiving just barely passed, we would like to actually take stock in what we’re grateful for this year.  Down here in the Masters of Brewtality crypt, you might think it is all demon summoning and perpetual chugging of fine suds and, for the most part, you’d be right; however, the real joy in any of our unholy rituals isn’t just seeing the terror wrought by a freshly-released elder god…. It’s the friends we made along the way.

Dapper Dre is one such friend. We sat down to interview him this month – in part to celebrate his return to the downtown Flagstaff scene after surviving the tragic Bike Party accident back in June, but also to hype up the expansion of one of our favorite projects: Freaky Foot Tours. We know, we know – our gimmick is America’s No.1 occult-themed craft beer column and they don’t serve beer on the tour.  BUT, they do take you through several of the more haunted downtown drinking spots, like the multiple bars of the Weatherford Hotel, the Monte Vista Cocktail Lounge and Orpheum Theater. Plus, nothing is stopping you from popping into a bar for a couple ice-cold pints before and after the tour.

So, back to Dre. He’s been with Freaky Foot Tours since the beginning. He brought his distinct brand of theatricality and attention to gory details to every aspect of these tours. While he’s still working back towards physically being able to take part in the tours (the dude lost a freaking leg in the accident), it hasn’t stopped him from making some fiendishly fun plans for Freaky Foot Tours.

First off, they’re working on a UFO and alien tie-in up at Lowell Observatory. YES! Most don’t know this, but a chunk of the initial observations made at Lowell of the canal systems on Mars was directly responsible for the explosion of the Martian-based science fiction that dominated that vein of literature.  Speculation that the naturally occurring erosive patterns seen could be indicative of intelligent life on our big red space neighbor sparked the imaginations of countless writers. Pluto was indeed the original Planet X. They knew for years that there was definitely something out there, but it took Percival Lowell to actually find it. Tales of him and his embittered wife still haunting the grounds abound and the fact that he’s interred in a glass pyramid mausoleum on the grounds makes it all that more creepy.

The other expansion is a historically based tour of Citizens Cemetery right across from Sechrist Hall NAU.  In the oldest corners, you’ll find notable town founders and organizers and, nestled in the back, the mass grave of the 128 people killed in a mid-air collision over the Grand Canyon in 1956.

“The majority of the victims were unidentifiable,” Dre explained, “So they brought them to Flagstaff to be laid to rest in the mass grave.”

An official cause of the disaster has never been nailed down, but it’s thought poor visibility was the main contributing factor. While there are plenty of fascinating biographies underneath somber headstones, Citizen’s Cemetery is also the final resting place of Flagstaff’s most shocking quadruple murders. In 1937, at a North Leroux house that still stands quietly just outside of downtown, Marie Green Walkup smothered her four children and then methodically stabbed them with an ice pick before shooting herself outside of the old country club. Her husband, JD Walkup – no relation to the NAU president – was away in Phoenix on business and quickly ruled out as being involved beyond suspected negligence.   By modern standards, the case would probably have been attributed to postpartum depression, but mental health was still in its infancy at the time.

Of course, all of this is still on the drawing board, but, down here in the crypt, we couldn’t be more excited. In the meantime, you can still enjoy the classic Freaky Foot Tour experience in all of its classic gory glory with any of its other macabre hosts. We personally have a soft spot for Michelle De Los Muertos as she’s just as much of a metalhead as we are. Ask her about her apartment above Mötley Crüe!

Check out their website at freakyfoottours.com for more info and to book a tour.

Finally, our official Masters of Brewtality pre-tour beer spot recommendation for this month is going to go to Zane Grey Ballroom at the Weatherford. Always a hotbed of paranormal activity, you might just get the night started right with your own personal experience!

Until next time, stay creepy!

Mike Williams (your titular Master of Brewtality) is a humble tattoo artist, egotistical writer, relentless beer drinker, unrepentant Hellraiser and connoisseur of all things Doom Metal. You can find him slinging ink at Flagstaff Tattoo Company or at some bar downtown.

Growing up and out: Dark Sky Brewing makes room for new beer garden

Larami and Ryan Sandlin, co-owners of Dark Sky Brewing Co., watched their neighboring building for years. The space at the corner of Birch Ave…

Masters of Brewtality take on the Annex

Andres “Dapper Dre” Adauto laughs with friends as he returns to the Flagstaff Urban Flea Market in October 2021. It was the first time that Adauto, who is co-owner of the market, had been back since being critically injured when a tow truck drove into the Flagstaff Bike Party in May.