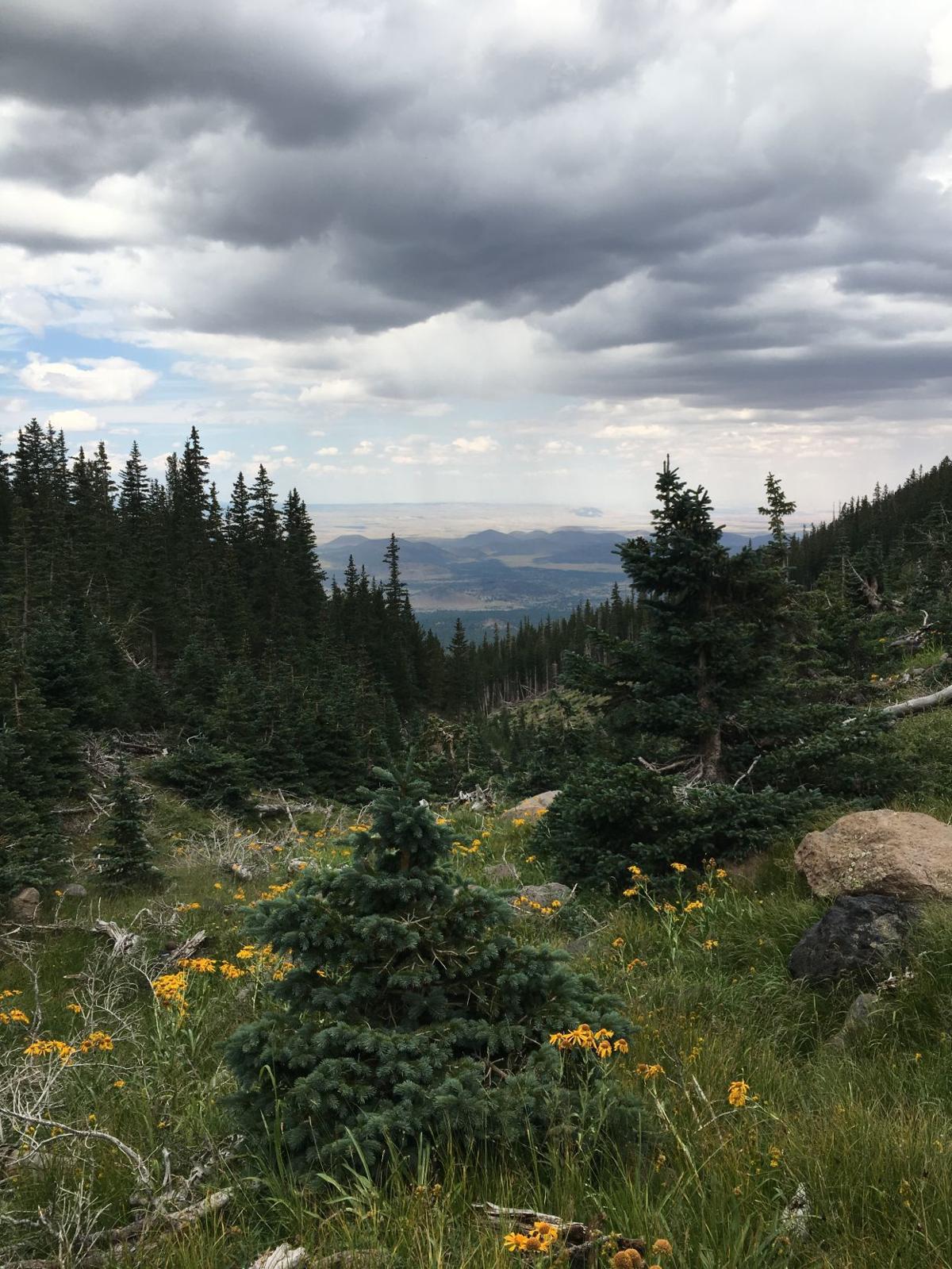 Supalpine meadow with sneezeweed looking to the north. 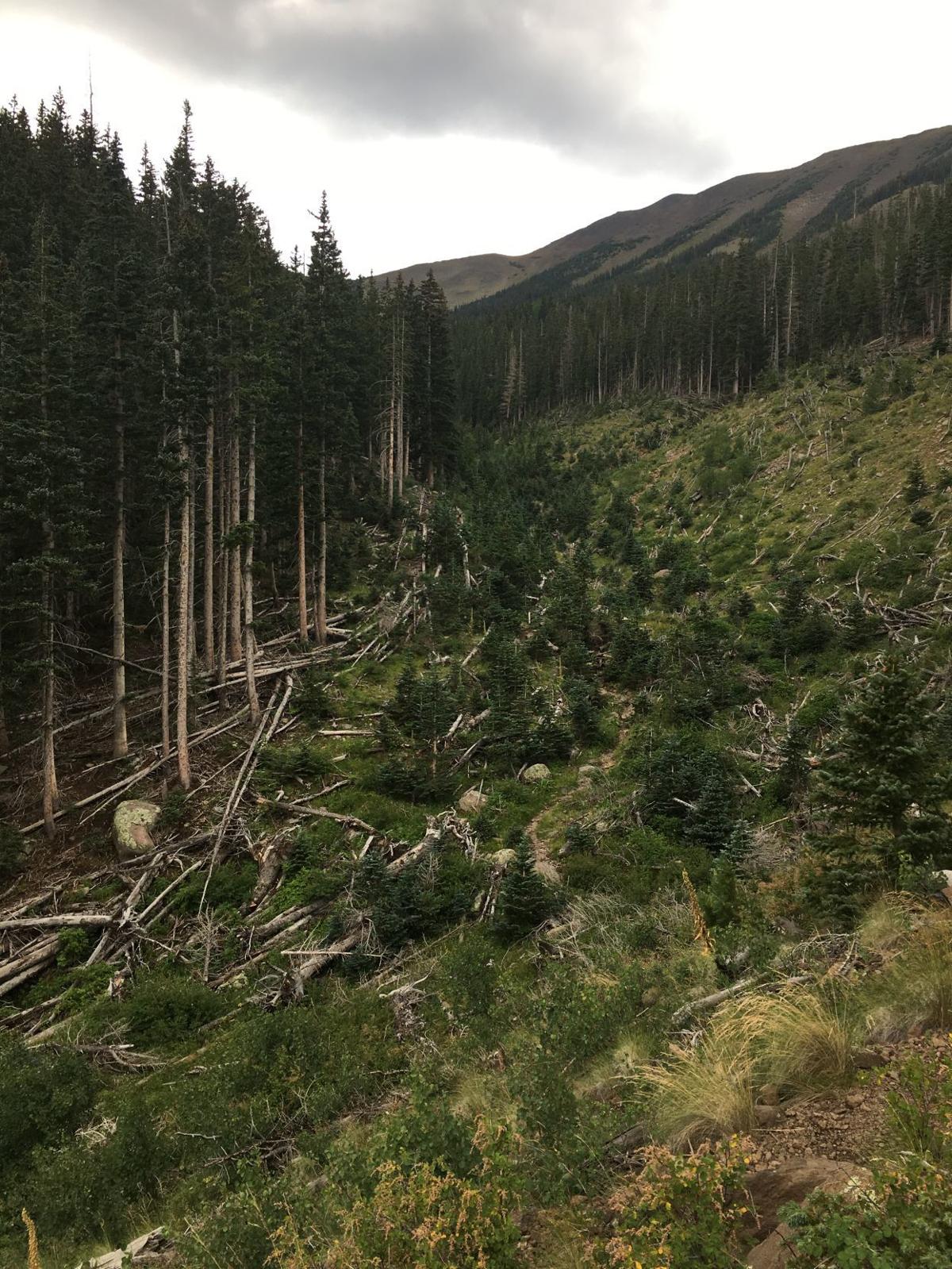 We showed up late morning to hike the Abineau-Bear Jaw trail on the north side of the Peaks. The drive from Flagstaff is such a perfect start, climbing higher and higher elevationally to where Arizona fescue is the main grass in meadows along 180, and there are lots of aspens.

The northern part of the 151 loop is open and beautiful these days. Recent fires have burned away many of these forests, so now there are large grasslands, and small clusters of pines and aspen. Aspen there are doing best within tall elk-proof fencing enclosures put in place by Coconino National Forest, since elk feed on them relentlessly in the open.

Along 418 we passed Walker Lake, which may be a perennially wet lake within a cinder cone with a deep crater, also called a caldera; it’s fun to walk around its rim. In the 1980s, Richard Hevly of NAU studied the mud on the bottom of Walker Lake that had accumulated over many millennia, and found thick lake deposits that formed in cooler and wetter times during the Pleistocene. He also found that the deposition of this lake mud layer was interrupted at one point by cinder fall from the eruption of a nearby cinder cone, Saddle Mountain, which produced a 3-foot thick layer of cinders in Walker Lake. Hevly suggests that Saddle Mountain might have erupted about 15,000 years ago.

I like imagining this world during the formation of the San Francisco Volcanic Field, with seemingly endless eruptions and lots of cinder, ash, lava and smoke coming in on places that you know -- it seems kind of primordial, but for the fact that the field is much younger, only 4 million years old, or so. Relatively few of the field’s volcanoes have been dated, though Sunset Crater at ~930 years is known to be the youngest. Merriam Crater’s eruption has been dated at 19,000 years ago.

From that view we headed to the San Francisco Peaks’ north side. The trailhead is about 1,600 feet higher than Flagstaff. It is a wetter and cooler place, you can feel it. We headed up the Abineau trail, ultimately traveling 7 miles, with a gain of about 2,000 feet. It is a steep start; all of the elevational gain occurs within Abineau Canyon.

We slogged up, stopping often to catch our breath and look around. The forest quickly grades from ponderosa pine to mixed conifer to spruce fir forests with the climb. For a while we walked through dark forest and scant ground cover, including the nitrogen-fixing Nevada pea and lots of mosses. People have reported the hot pink fairy slipper orchid along this trail. The north side of the Peaks is bony, with big roots spanning out across the rocky surface, with lots of lichens and mosses.

And then the dense forest of Abineau Canyon opened into the Crossfire avalanche chute. This is one of the longer avalanche paths on the mountain, extending from near the top of Humphreys quite a way down Abineau Canyon. An epic avalanche in January 2005 cleared this chute of all large trees, leaving trees as large as several feet in diameter strewn all over the place, and cutting a swath more than 100 feet wide through the forest in places. What a sight that must have been. Uprooted trees were piled deep in much of Abineau Canyon, requiring an enormous effort by the Forest Service to clear them.

The chute became a subalpine meadow after the avalanche, packed with flowers, grasses and shrubs, including twinberry honeysuckle. There were yellow sneezeweed, magenta fireweed, paintbrush and purple Whipple’s penstemon. That’s the nice thing about avalanches: they open up forests and for a while, lush, diverse meadows can establish in the sunlight.

Many forest animals are drawn to them. We saw a squirrel cruising across a long log with a huge mushroom in its mouth. So, 14 years later, Engelmann spruce and corkbark fir saplings, 4 to 8 feet tall, are growing in the avalanche corridor, too, and will grow into mature, dense forests, unless another avalanche comes along sooner. Apparently trees that survive avalanches, when their neighbors are torn away, thrive with the increased light. It’s an intense place, with the notion of a massive field of snow raging through and changing the world. Higher up, there are other avalanche chutes along side of Crossfire, showing what a big source of disturbance this is in the spruce fir zone.

At the top of the Abineau trail, the world opens up with amazing views of the San Francisco Volcanic Field and the Painted Desert below and, above, all the peaks above treeline, dark spruce fir forests and avalanche chutes through them. We saw Clark’s nutcrackers working the bird pines, Southwestern white pine and limber pine. They are beautiful, these seed harvesters, that work high elevation pines in late summer, and then low elevation pinyon pine cone crops later in the fall. Remember, when you see a pinyon in the Peaks, it germinated from seed that probably was delivered and cached by Clark’s Nutcracker.

After this, we headed down the Waterline Road -- that’s right, the northern part of that road. It winds around from Abineau Canyon to the Inner Basin. This section of the road no longer carries water to Flagstaff; you can see old pieces of the metal line here and there. We descended back into a forest of spruce and fir, softened by lots of healthy-looking aspen. There were red baneberry and Arizona mountain-ash growing along the road in sunny patches. The road cut reveals just how shallow soils and even rocky layers are, with bedrock lying just below the surface. The forest here is dense, soil-starved and fabulous.

After a few miles we headed down the Bear Jaw trail. It is a smaller drop across rocky slopes. Despite this, there are markings on aspen trunks left by shepherds who grazed sheep through the area. There is remarkably little elk damage to trees and shrubs along Abineau-Bear Jaw, as though it’s too steep for them, which is just great. This hike is lovely and you know it will be amazing this fall!

Gwendolyn Waring is a writer, ecologist, painter and mother based in Flagstaff. Her book on the San Francisco Peaks launched last winter and is available locally at Bright Side Bookshop, Babbitt's Outfitters, Aspen Sports, Starlight Books, the Museum of Northern Arizona and Jay's Bird Barn. For out-of-towners and others, visit SanFranciscoPeaksNaturalHistory.com.

The show must go on: Arts organizations transition to virtual community-building in the wake of COVID-19

This is the second in a weekly series exploring the lives of artists and community organizers during the coronavirus pandemic. If you know of …

A constant reframing: Artists Dapper Dre and Sean Golightly on coronavirus and the arts

This is the first in a weekly series exploring the lives of artists and community organizers during the coronavirus pandemic. If you know of s…

Supalpine meadow with sneezeweed looking to the north.