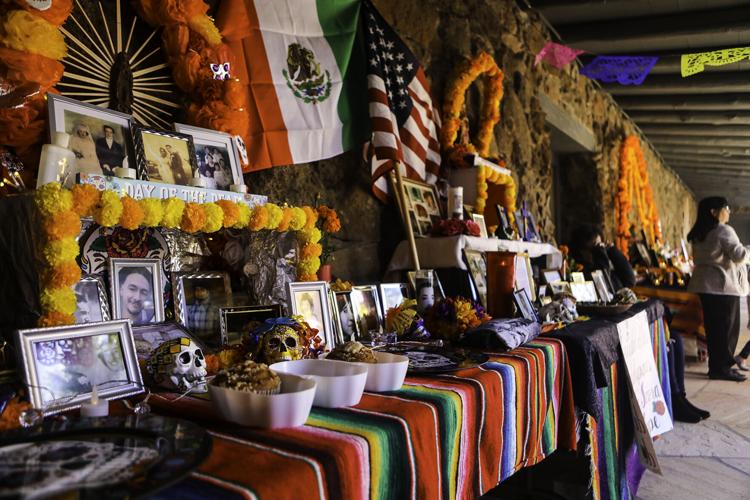 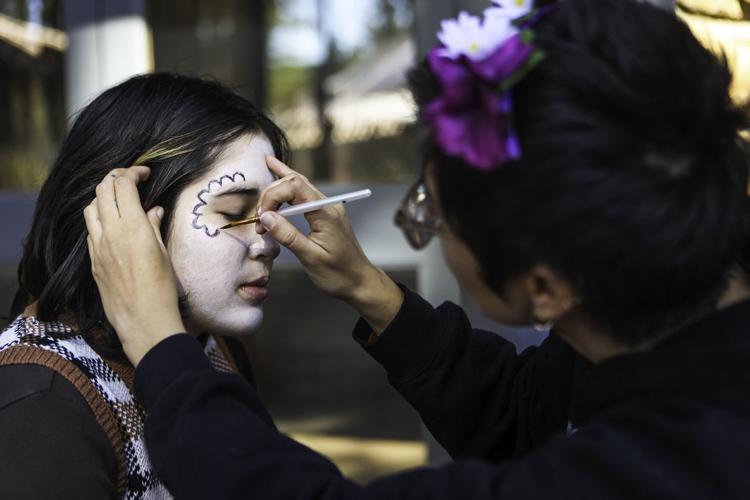 Ella Ramirez sits patiently as her face is painted by Maya Morales Saturday morning on the patio of the Museum of Northern Arizona during the 19th annual Celebraciones de la Gente.

The traditional dances had been performed, the mariachi music played and the sugar skulls decorated. It was the end of the 19th annual Celebraciones de la Gente, or Celebration of the People, a two-day festival of the traditions found in Dia de los Muertos, the Day of the Dead. There was only one event left.

Lining the courtyard's perimeter were over a dozen ofrendas, altars elaborately decorated in cultural and religious symbolism to honor loved ones who have died. Hundreds of photos sat atop the ofrendas, between candles, food, drinks and an occasional pack of a late loved one's favorite cigarettes. A crowd stood in the center of the courtyard. They had stayed after the festivities to say goodbye to those they had lost.

Incense was lit and blown in each cardinal direction, the crowd turning with the smoke. The ceremony leader walked with the smoking incense along the edge of the courtyard, the Mariachi Nuevo Azteca following while playing a slow and heartfelt song. The procession moved a few steps at a time, pausing at each ofrenda. The ceremony ended with the leader and mariachi band continuing out of the courtyard and into the hallways, leaving members of the crowd with tears in their eyes.

Oct. 29-30 members of the Flagstaff community came together to attend the annual celebration held at the Museum of Northern Arizona and in collaboration with Flagstaff Nuestras Raices, a non-profit organization dedicated to promoting Hispanic culture and history in Flagstaff.

The Nuestras Raices team begins working months in advance to ensure the festival runs smoothly and involves everyone that wishes to participate in the traditions. Lydia Anaya has been the organization's president for over three years and said she believes the festival is important, not only for the Hispanic community but for Flagstaff as a whole.

“A lot of people didn’t know about Dia de los Muertos, or really when we started back with our group, a lot of people didn’t know how much the Hispanic communities had contributed to Flagstaff,” Anaya said. “We weren’t mentioned in a lot of things or included in a lot of things. So, we try to make ourselves known and discuss and teach them the things that our parents and grandparents contributed to Flagstaff.”

Anaya said that many of the Hispanic families living in Flagstaff when the town was being built worked at the lumber mills and with the railroads that were responsible for much of the town’s development. The Hispanic community deserves credit for building much of Flagstaff. Nuestras Raices hopes to bring awareness to this, Anaya said.

Although Anaya believes the festival’s representation of her culture is important, for her and many others, the best part of the celebration is the ofrendas themselves.

“My favorite part of the festival is when we put up the ofrendas,” Anaya said. “People come around and we share our stories and the history of our parents and grandparents. We’re all together in this, so it’s a real joy because you recognize a lot of the people as you walk around and you look at the ofrendas. You remember them as you were growing up.”

With the closing ceremony over and the mariachi music slowly fading down the hallways, those that had set up ofrendas said their final goodbyes and began to break down the altars.

Victor Magana, who has attended the celebration for six years, was packing up the ofrenda he had set up for members of his church. One of his favorite parts of the weekend was the dances performed by the Ballet Folklorico de Colores. However, he said he returns each year because he feels the need to come for a chance to remember his family and friends who have died.

“That finale was really something else, the one that just ended, that’s the one that tops it all I think,” Magana said. “This is what we [come for,] family members and friends that have passed away.”

The Day of the Dead is as much a celebration of life as a remembrance of the dead. It is not something to be afraid of, Anaya said. The festival at the museum is for anyone interested in attending or participating. Anyone can enjoy the performances and learn how to set an ofrenda and remember those they lost.

The New World is an oxymoronic statement that seems acceptable to academics and historians alike. To those of us that are Indigenous to the Am…

Ella Ramirez sits patiently as her face is painted by Maya Morales Saturday morning on the patio of the Museum of Northern Arizona during the 19th annual Celebraciones de la Gente.