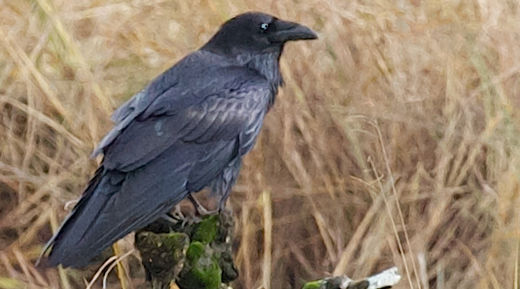 The raven is identified by its shaggy throat and hoarse, low call, or “caw.” It is the largest of all North American blackbirds. 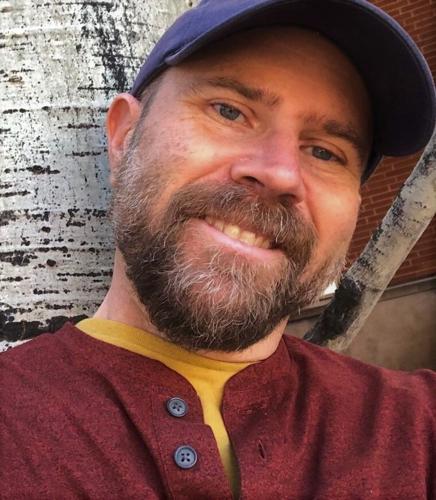 This past summer, I seized early daylight for looping walks along the Arizona Trail, urban trails and forest pathways not far from my home. I found solace in the wildland-urban interface — those undefined boundaries between the developed and the natural.

One of my loops crossed paths with what I nicknamed the Big Conspiracy. On three different occasions, I crossed over from the Arizona Trail east toward the Rio De Flag to find a gathering of ravens in the same stretch of forest. One of the group names for ravens is a conspiracy, and I relish the curious and conniving nature of it.

The Big Conspiracy consisted of around a dozen large ravens who scattered throughout the trees. Each time I encountered them, I listened to their constant vocalizations, as amplified as I had ever heard a raven gathering. Four or five took to the higher treetops to caw at one another. Other ravens flew back and forth between the trees of the more vocal members.

I wondered: what did this gathering mean? What was being discussed? Why here? The second time, I stopped and took a seat and watched them. The third time, I saw fewer birds and they were not quite as loud. It was as if a matter had been settled.

I struggled to resist an anthropomorphic spin on the Big Conspiracy. I wanted to believe what I observed was not random. In their gathering and wild vocalizations, I sensed a meaning — even if it was one I could not know.

Because ravens are threaded into the fabric of my daily wanderings, I associate them intimately with the landscape of my northern Arizona home. But during this time of Halloween, attention often turns to symbols of the macabre. Among them is the raven, immortalized in Edgar Allan Poe’s gothic poem of the same name. In Poe’s lyrical story, the raven is a creature who mocks the misery of the narrator with his signature retort, “Nevermore.”

Because they are black and a scavenger associated with death, ravens appear in the spooky imagery of the Halloween season. They are perched on pumpkins and skulls with sinister expressions. However, ravens and their brethren have proven a much more complicated and colorful creature than the plumage suggests. With minds sharper than their claws, the ravens deserve more recognition beyond the eerie iconography during this haunting season.

In 2020, a behavioral and brain study on avian consciousness involved further discovery of the intelligence of these birds — from a family known as corvids. In the article published in the journal Science last September, animal physiologists Andreas Nieder, Lysann Wagener and Paul Rinnert reported research on carrion crows, cousins to the raven, and found the birds “demonstrated sophisticated perceptual and cognitive behaviors that suggest conscious experiences.”

The research and findings only added to the mounting evidence that ravens and their cousins are no “bird brains” in the pejorative sense. Nieder and fellow researchers argue that, although these birds lack the cerebral cortex of primate mammals such as humans, evolution has led to a different reorganization of the brain and its functions.

“Humans have tended to believe that we are the only species to possess certain traits, behaviors, or abilities, especially with regard to cognition,” the researchers write. “Occasionally, we extend such traits to primates or other mammals — species with which we share fundamental brain similarities. Over time, more and more of these supposed pillars of human exceptionalism have fallen.”

The recent study builds on one of dozens that continue to reinforce newer understandings of ravens and their cousins. Tad Theimer, Northern Arizona University professor in the Department of Biological Sciences, shared how the shift in understanding of brains of corvids and parrots arrived first in the 1990s.

“Folks began to discover that the bird brain was simply built differently, with greater density of neurons and simply wired differently,” Theimer said, noting how parrots and corvids demonstrate higher functionality “with more learning and cognitive ability, likely because they are social animals, and sociality requires those kinds of brain functions.”

Theimer listed several reasons why the science on avian consciousness is important, from a better understanding of brain function generally and development to discover ways to understand and treat cognitive disorders as examples. But he also suggested it is important for us to better comprehend these animals while taking down those human exceptionalism pillars.

“Having to admit that we are not the only animals capable of higher thought, learning, tool use or empathy should give us pause as to how we treat our fellow creatures and the planet we share,” he said.

Southwest writer Mary Sojourner, whose books include The Talker: Stories, 29,Going Through Ghosts and Bonelight: Ruin and Grace in the New Southwest, carries a heightened connection with the savvy ravens and sly crows. One of her publications was a journal she created called Sister Raven, Brother Hare, which included facts and observations about the birds.

“I once would have said that I believed we were kin,” she shared in a recent interview regarding ravens and crows. “That was before I more intensely explored the human drive to appropriate. I first watched crows in an old Victorian cemetery near my home in Rochester, New York. I walked for hours there to be able to live with my unruly nervous system. The crows made me laugh. The laughter modulated my brain chemistry.”

Sojourner also recalls a morning outside her former wallboard and scrap lumber cabin home where two ravens played a game with one of her cats.

“My gorgeous and not-too-bright long-haired kind-of Himalayan cat, Lurch, came out. He trundled over to a pine and looked up. Two ravens sat on a low branch. He valiantly leaped in the air. The ravens considered him — and flew to a lower branch.”

With our collective appreciation of ravens as bright creatures, it lends more to our experiences with observing their wiles. The ebony bird is also connected to indigenous cultures such as with the Zuni, who consider Raven to be a prankster. In their playfulness and wisdom, we can consider their deeper intelligence and experiences.

“It’s the social interactions that I find intriguing, whether it is ravens interacting with other ravens, or ravens interacting with their crow cousins,” Theimer said. “They signal their internal state with more subtle movements, raising the pointed throat feathers, a soft gurgle, a roll of the eye. Watch any interaction carefully and you will soon appreciate the subtlety of communication among the interactors.”

He added, “I also love to watch ravens when they are in a playful mood in the sky, dipping and swerving, barrel-rolling, their wedge-shaped tail flared out behind. In some cases, these are social displays but in others, one simply has to admit that they are just having fun, enjoying their own adept ability as masters of flight.”

Seth Muller is a freelance journalist and author based in Flagstaff. He penned two Grand Canyon books: Canyon Crossing: Stories from Grand Canyon Rim to Rim and Heart in the Bony Middle. He teaches English at Northern Arizona University and is the former editor of Northern Arizona’s Mountain Living Magazine.

The New World is an oxymoronic statement that seems acceptable to academics and historians alike. To those of us that are Indigenous to the Am…

Loved but not lost: Celebraciones de la Gente remembers generations of loved ones

The traditional dances had been performed, the mariachi music played and the sugar skulls decorated. It was the end of the 19th annual Celebra…

The raven is identified by its shaggy throat and hoarse, low call, or “caw.” It is the largest of all North American blackbirds. 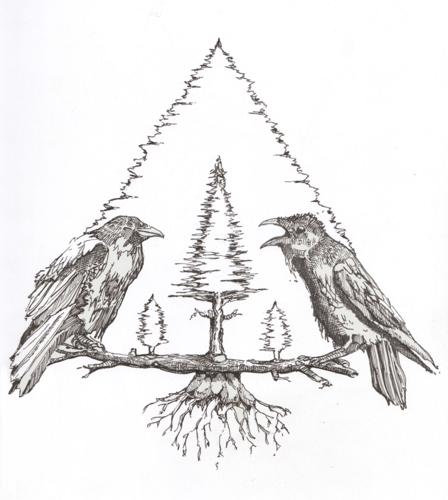