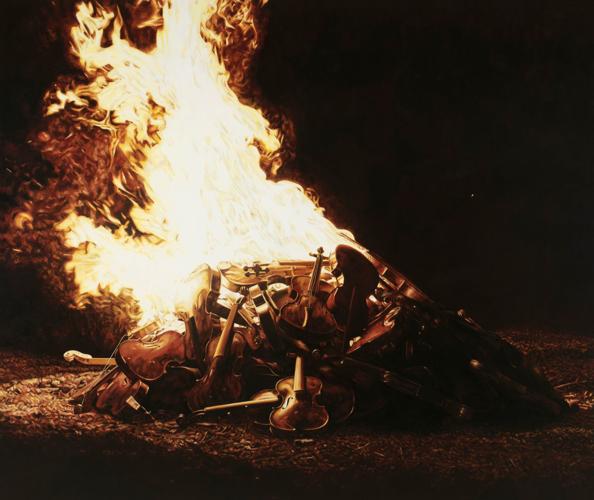 Allegro, one painting in Julie Comnick's series Arrangement for a Silent Orchestra: 451°F. All photos courtesy of the artist 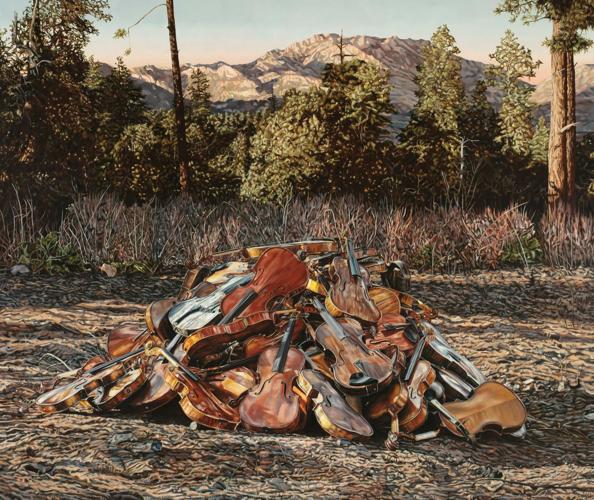 Artist Julie Comnick at work on Arrangement for a Silent Orchestra: 28°F in Kendrick Park. 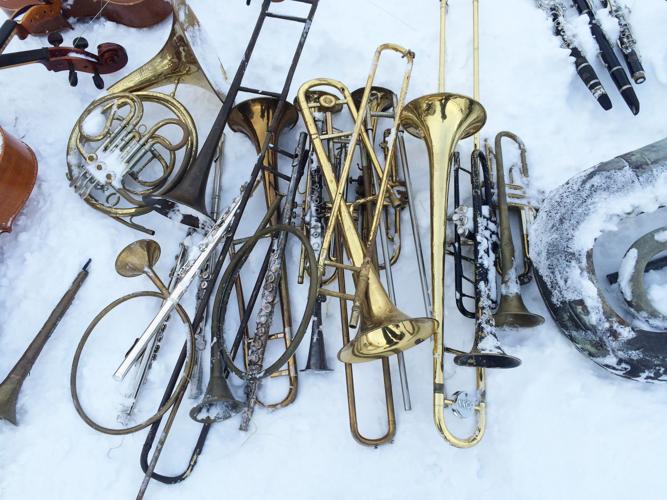 The brass section of artist Julie Comnick's Arrangement for a Silent Orchestra: 28°F.

Billowing snow fills the barren meadow of Kendrick Park at the base of the San Francisco Peaks. The tree line’s green teeth fade in and out of focus, contrasting a form emerging from the eggshell-colored blanket in front of the rising sun. Julie Comnick and documentarian Mark Neumann disassemble a crude fence protecting the pile of instruments they’ve been studying for weeks. Kneeling in the snow, Comnick snaps digital photos of her deliberately-arranged pile mimicking the mountainous backdrop.

With a careful eye, one can spot a cello’s form, a fallen double bass, trombones and even a weathered tuba under the thick drift.

Fresh off Comnick’s participation in the recent Fires of Change exhibition at the Coconino Center for the Arts, these frigid excursions are only the beginning of the Prescott-based artist’s latest project. Well, an evolving commentary of one she initiated in 2009.

Arrangement for a Silent Orchestra began with 451° F—named for wood’s combustion temperature. Comnick explored the dissolution of culture in tune with rising technology through her personal iconography. As the only child of a piano teacher and vocal musician, Comnick was pressured to pick up an instrument, and settled on the small—yet powerful—violin, playing in symphony orchestra settings from age 8 through 18. This abandonment has haunted the artist, often appearing in recurring dreams and as imagery in her previous paintings.

Using the violin metaphor, she collected 100 of the instruments from shops nationwide over a nine-month period. She piled their wooden bodies in a form representative of Granite Mountain behind the hill near her Prescott home—then set them on fire.

She illustrated the process on massive oil-painted canvases that comprise the series, and in video. But even while working on the “burning violins,” as they’ve come to be called, Comnick says she couldn’t help pondering fire’s converse: cold, tranquil, opaque and silent.

“In some ways, it seems very contradictory I did the burning one first, but I did not know I would need them,” she says, laughing.

In a similar conceptual vein that includes a full orchestra of instruments and a sort of departure in technique and genre, Comnick envisioned Arrangement for a Silent Orchestra: 28° F, again a play on her material, this time the temperature at which snow accumulates. The collection of instruments proved integral to the story.

“It was really important to me that all these instruments were already rendered useless, which is the same thing in the first phase, or the people who donated them deemed the value in this project was greater than an attempt to refurbish them,” she says of the collection. “So they’re either broken, considered beyond repair, or poorly made in the beginning.”

Secondly, her crisp plan for how it would work involved a meadow with iconic Flagstaff imagery in the background and a snowstorm rolling in from the horizon line. But, as is the case with many things, the artist had to eschew a perfectly-timed chain of events for flexibility.

One major challenge came when the space she had chosen off A-1 Mountain Road closed after a mid-December snow dump. Since another collaborator suggested Kendrick Park, she and Neumann have traveled to the space both together or separately nearly every day since December 22 making sure the pile remains undisturbed by tourists, residents of the nearby community, or worse, stolen. Second, they document the shifts in weather and how much of the pile is covered.

“Part of it, you’re busy, you’re actively taking photos, you’re checking the … Is that still going?” Comnick pauses mid-sentence to check if the timer is still ticking toward the 10-minute mark until the video camera’s button must be pushed again. With 46 seconds left, she continues, “Every day you’re learning more about the details. There’s something about sitting in this space and seeing how the grass comes up. This space becomes sacred in a way.”

With risk a bearing factor in the project’s outcome, chance weighs equally, and sometimes for the better.

“Risk is daunting, scary and interesting, but looking at video footage after the first dump, the way the violin was positioned, the shape of the wood comes out,” Comnick explains. “I would never think to invent that, but it happened, therefore on the paintings I can figure out ways to emphasize that.”

Though this project contains familiar threads for the artist to follow—even continuing in fire’s path as the foothills in the area have previously been burned by fire—the artist will soon uncover new techniques in her studio, and learn the process of painting snow.

“I still don’t know how I’m going to do this, that idea of snow falling and that obliterating visibility, and going into non-objective abstraction, which I’ve never done before—that’s compelling artistically and visually and it sounds like a big challenge,” Comnick notes.

Using composites of the photos and time-lapse video she and Neumann shot at the pile site—the build, the incoming storm, snow and melt—Comnick will retreat for years, creating the oil panels for the series’ final statement.

Though Arrangement for a Silent Orchestra: 28° is a multi-layered commentary, largely speaking of preserving the “brain” of the iconography, the long-term developments will continue to unfold into the holistic statement on culture, arts funding in education and heritage.

“It’s sort of like the licking-the-frozen-flagpole phenomenon, and what metal does when it’s cold,” Comnick explains of the materials’ reaction. “Sort of further degrading these instruments, but also the idea of preservation and even cryogenics. You’re still destroying it, but there’s this long-term idea of preservation.”

As she readies to jump out of the car for another round of photos, Comnick adds, “It’s a long-term thing, which makes it totally worth sitting out here and getting what I need.”

Keep up to date with Arrangement for a Silent Orchestra and learn more about the artist at www.juliecomnick.com.

“Is this real art, if there is no human maker?”

The Great Unknown: The Museum of Northern Arizona unveils a new exhibit that examines the mysteries of Glen Canyon

At the Museum of Northern Arizona (MNAZ), visitors can travel through time in “The Great Unknown” exhibit, which tells the story of the ever-c…

Allegro, one painting in Julie Comnick's series Arrangement for a Silent Orchestra: 451°F. All photos courtesy of the artist

Artist Julie Comnick at work on Arrangement for a Silent Orchestra: 28°F in Kendrick Park.

The brass section of artist Julie Comnick's Arrangement for a Silent Orchestra: 28°F.