Become a Member
Read Today's E-edition
Share This
Playful but deep: ‘Postbiological Mutations’ molded outside the box
0 comments
Share this
1 of 2 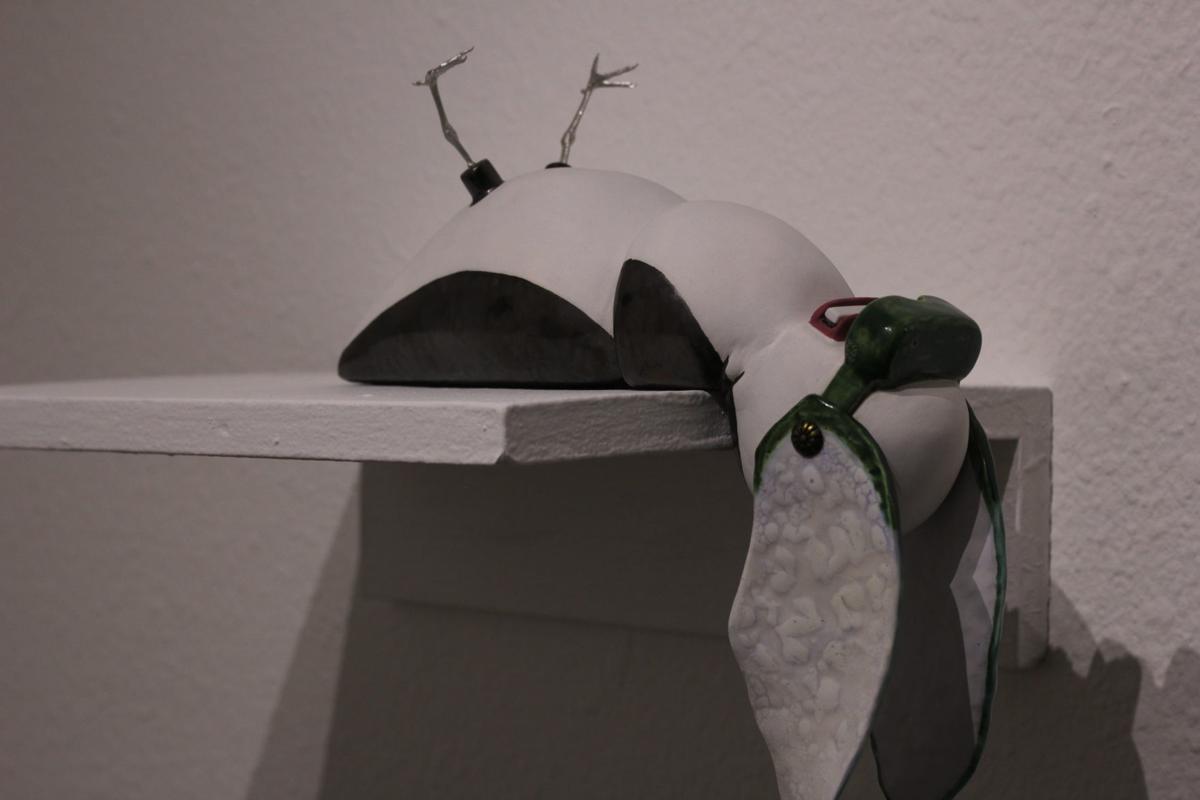 "If your artwork can stimulate conversation and intrigue, you've done a good job," Tristyn Bustamante says. Photos by MacKenzie Chase 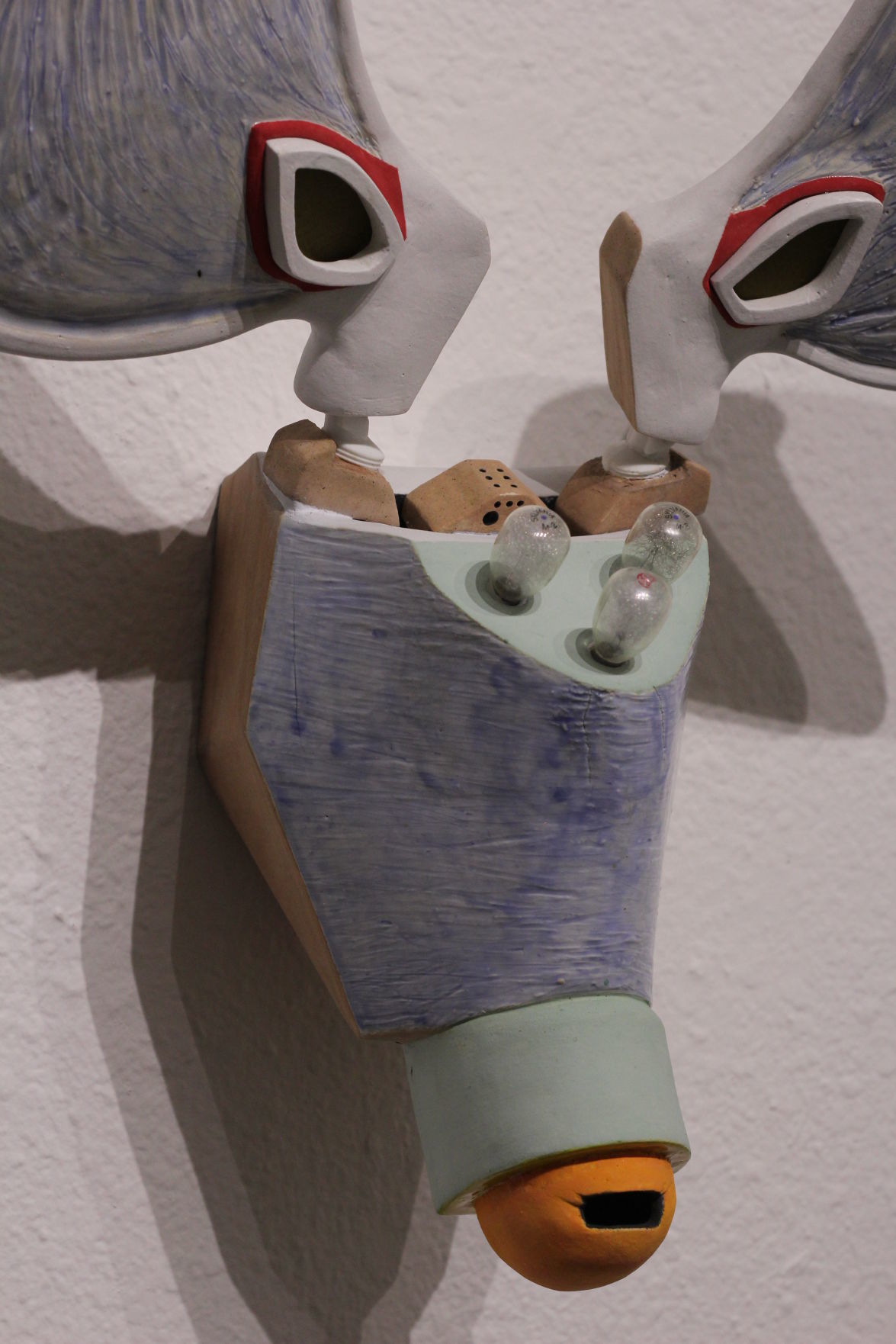 Tristyn Bustamante was in the first grade when she first created something with clay.

“I made a dinosaur with a hot dog in his mouth, then my mom had me in ceramics [class] every Saturday morning at the Edna Vihel Center,” she says, referencing a public arts center in Tempe, Arizona. “I took classes there from 6 years old until I went into high school.”

Now a professional sculptor, Bustamante prepares work for exhibits during a number of residencies where she takes on new techniques in studios across the country and internationally. During these creative periods, she often follows a spark of inspiration until three or four in the morning.

“That’s just what always happens when I have that kind of freedom,” Bustamante says. “I know myself well enough that somehow those are the hours I function the best—I’ve been that way for a long time.  I love nighttime, I love being awake and moving around at night. You just kind of feel like you’re in a different place when everyone’s at home sleeping. The lighting is different, the sounds are different, the smells are different. There’s something magical about that time.”

These senses, sight, hearing, smell, play an important role in her current show at the Coconino Center for the Arts, Postbiological Mutations.

Each of the pieces included in the show were made during Bustamante’s residency at New Harmony Clay Project in Indiana this past spring. There, she experimented with different recipes for her clay and challenged herself to use found materials to build on the theme of sense and perception.

“Voice-Activated Deer/Dear Assistant” is a surreal take on a deer with three repurposed light bulbs in place of eyes and large ears representing the prey animal’s heavy reliance on its hearing to survive in the wild.

“I don’t often use the same things over and over; I’m constantly having to figure out the materials,” Bustamante says. “Especially with this batch of sculptures, everything is new for me. It’s one of the reasons I really like ceramics. If you spend time working with the material, you can improve, but there are so many different recipes and glazes and firing processes, the opportunities for learning are kind of endless.”

This fall, she will be the artist in residence at the Ceramics Creation Center of Clayarch Gimhae Museum in South Korea, learning as much as she can from her new surroundings and fellow artists.

“It’s not an easy lifestyle, I’ll say that, although I know [for] any artist and myself, we’re all very grateful to have the kind of opportunities we have and the freedom to do it,” Bustamante says.

Before she begins working on the final iteration of a show, she intuitively creates a piece just to get her hands moving, later conducting research on her chosen theme. She’ll set various guidelines for herself depending on this theme—for Postbiological Mutations, she made sure each piece included an animal component and a technological component to convey a particular sense. After all this is decided, she’ll begin sketching ideas to come up with the final design, which is meticulously shaped with clay and fired in the kiln.

During Postbiological Mutations’ opening reception on Saturday, Aug. 24, Bustamante says she was apprehensive about revealing this new direction in her work, but pleased to see people taking the time to absorb the meaning of each piece.

“I was very appreciative that people came and stuck around and had questions,” she says. “A number of people circled around once and then went through a second time. If your artwork can stimulate conversation and intrigue, you've done a good job.”

A feeling of whimsy carries over from her first foray into the world of clay with the dinosaur and hot dog, although that’s a descriptor from which she says she’s trying to distance herself. Enter “Virtual Apperception Test, The New MSR.”

“I think that piece is approachable because it’s more playful, but then when you look at it there’s a lot of deep thought behind it,” Bustamante says.

A bird-like creature made from coiled and pinched porcelain lies on its back, its pewter legs in the air, while its head hangs over the side of a small shelf. A pair of virtual reality goggles  covers its face. The sense assigned to the piece is proprioception, the subconscious awareness of the physical self and movement of the body. The title itself plays with a variation of Thematic Apperception Test, a tool used by psychologists to evaluate a person’s thought patterns based on reactions to ambiguous images, and mirror self-recognition tests given to animals to determine their self-awareness.

Is what we see an accurate representation of reality? And if it’s not, do we even have the ability to be aware of its deceit?

Tristyn Bustamante’s Postbiological Mutations is on display in the Jewel Gallery concurrently with Space Between, featuring the work of Sky Black and Jacques Cazaubon Seronde, in the main gallery at the Coconino Center for the Arts, 2300 N. Fort Valley Road, through Oct. 19. The gallery is open to the public Tuesday-Saturday, 11 a.m.-5 p.m. for free. Visit www.flagartscouncil.org for more information.

The winners will be announced at the annual award ceremony on April 30, 2022.

"If your artwork can stimulate conversation and intrigue, you've done a good job," Tristyn Bustamante says. Photos by MacKenzie Chase