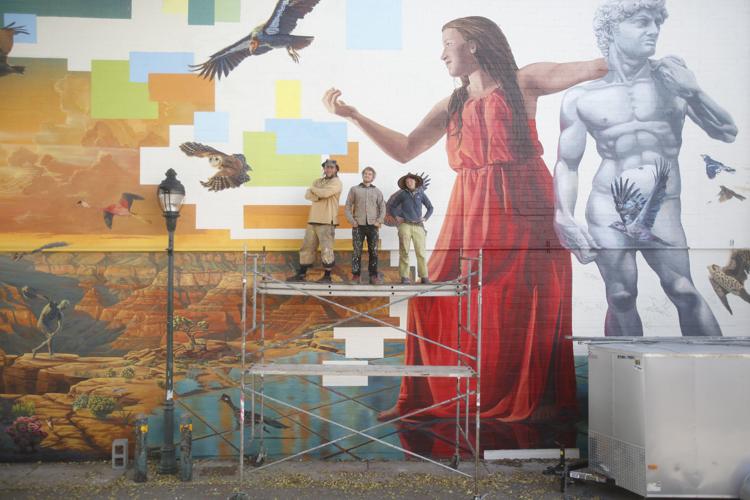 Sky Black (center) and the Mural Mice stand at the center of their new mural The Sound of Flight. Photos by Taylor Mahoney 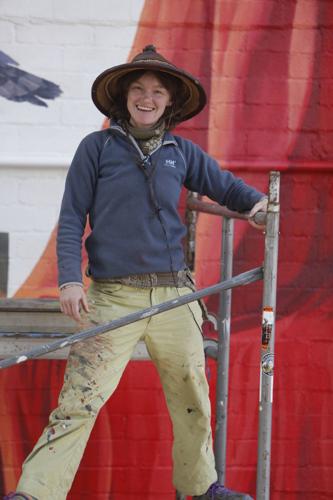 Margaret Dewar of the Mural Mice. 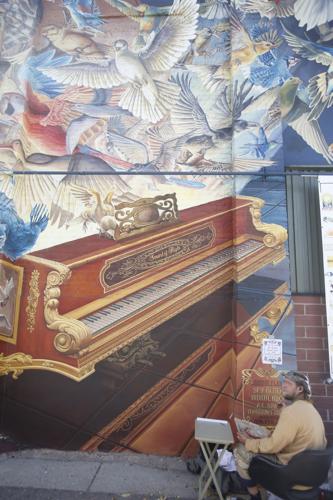 R.E. Wall of the Mural Mice 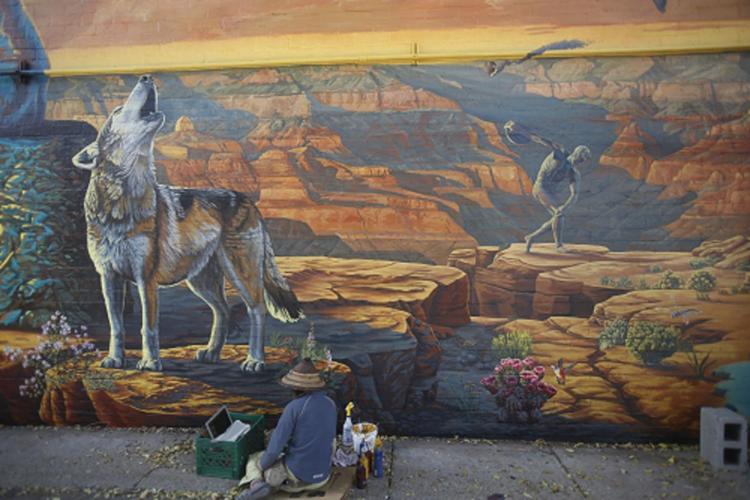 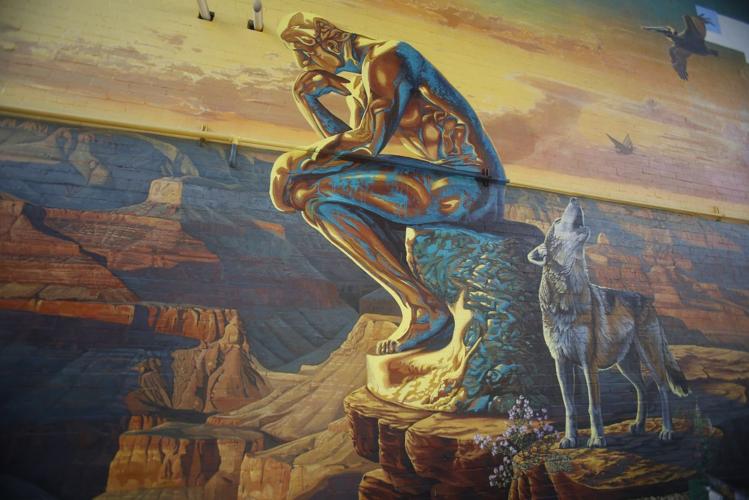 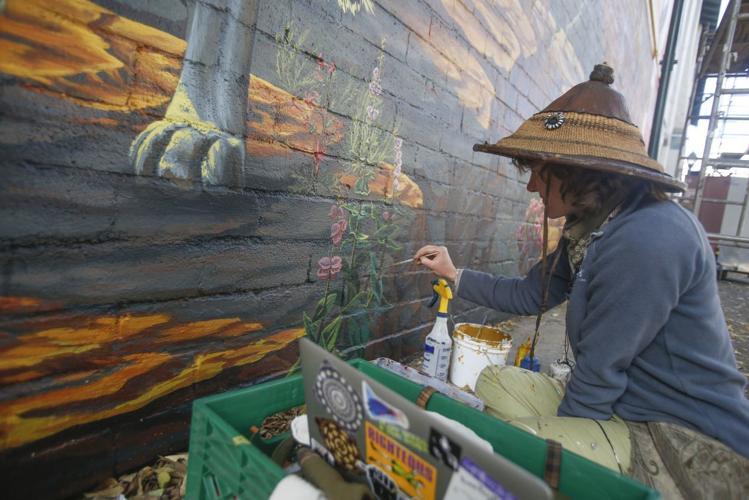 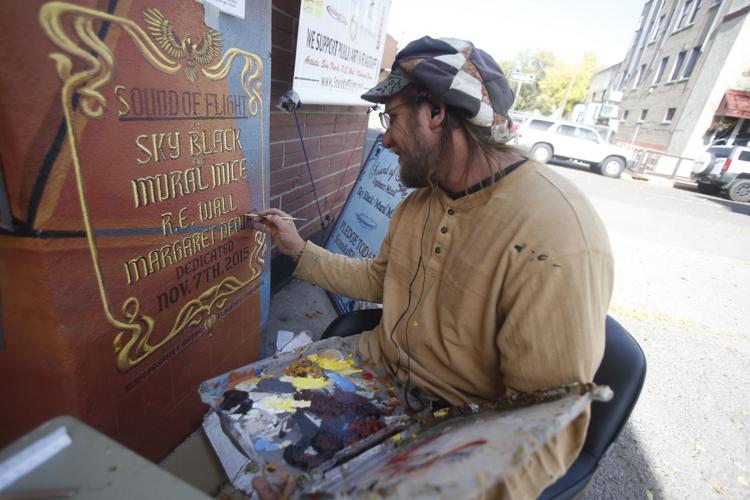 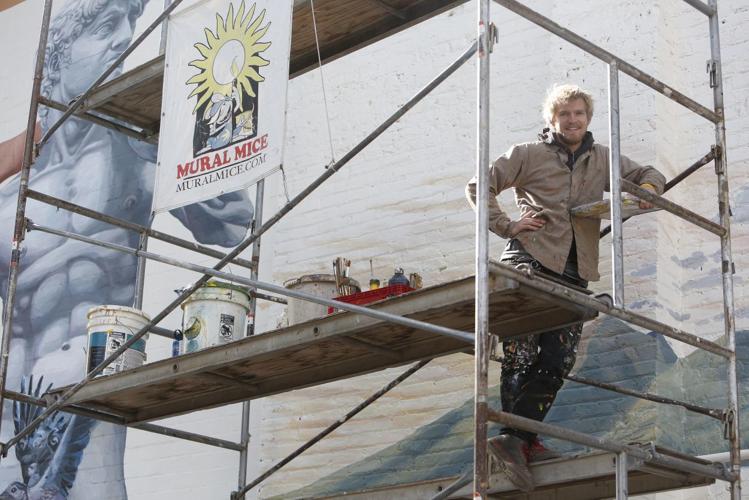 A trickle of passersby stop mid step to snap a quick photo of what they may or may not understand is history unfolding before their eyes, hypnotized at first by the work completed last summer on the Orpheum Theater’s eastern wall. Monsoon rains have poured and temperatures have soared while Sky Black and the Mural Mice, R.E. Wall and Margaret Dewar, perched on scaffolding or crouched in the rocks to make their biggest mark yet. It unfolds as a living story that has embraced community and transformation of one alleyway’s peeling paint into an example of public fine art.

More than two years of planning and painting have ticked away, and now they are down to the wire. The trio has consumed 150 gallons of high-quality acrylic paint logged in millions of brush strokes on their 4,500 square foot canvas. The newest artistic focal point of downtown Flagstaff now towers above Aspen Street—what all accounts point to as the biggest mural in the entire state of Arizona—The Sound of Flight.

Since summer of 2014, thousands have come to know the exquisitely-detailed grand piano teeming with bright light and a rainbow-colored menagerie of birds. Their eyes trace the aviary pattern guiding them toward the San Francisco Peaks and the gargantuan figures at the mural’s center: a three-story-high representation of Michelangelo’s David and a woman in a red dress with her arm draped around her dynamic companion. She is the lyrical muse of the piece—the model for which was Black’s sister—and bears witness to the mural’s southern canyonlands.

Late morning light plays off the painted rock walls that mimic the Grand Canyon at sunset, illuminating The Thinker and a gray wolf howling at the sky. All manner of intricacies envelop the canyon, from local flora and fauna to a hot air balloon bidding farewell with a wave of black smoke.

Black explains The Sound of Flight’s impetus was a desire to create a large-scale oil painting. Using not a single spray can, the artists brushed layers upon layers of color and shadow to play with viewers’ perspective. In the final hours before the ribbon is cut on what comprises more than eight months of continuous painting, six months of fundraising and all that time with the community cheering them on, the painters are spread across the brick façade Black conceptualized on a panel more than two years ago.

At 23, Black already has painted a name for himself in town and abroad, with murals around the Midwest. One 2014 solo show at the Coconino Center for the Arts, My Beautiful Friends, captured audiences with surrealist-style oil paintings that examine the edges of dreams and reality.

But the young artist knew he wanted to make a bigger splash in town, and took his idea to the Orpheum’s co-owner, Chris Scully, who green-lit the project followed by City approval. With a little convincing, Black learned he would need help to bring this project to life. He called on the Mural Mice who brought their extensive experience in paint and fundraising to the table.

Their work from 10 years as a duo can be seen across Arizona from Mesa to Prescott. In their three years living in Flagstaff, the Mice have dedicated four murals so far, including the Route 66 scenes on the south wall of Lumberyard Brewing Co., and are always up for a new challenge.

“We’re raising the bar of public art, so it’s not just reserved for alleyways. It’s the finest art we can make in the downtown area, which is a tourist attraction and it’s good for everybody,” Wall says of this and other mural projects.

The imagery and lyrical nature of the painting, Black says, were designed to incorporate the canvas’s theatrical elements as well as uplift and inspire visitors through bursts of color and whimsy. The migration toward the canyon links two worlds—and really tested the painters’ experience, he adds.

“I thought that’s something everybody would feel good about stumbling upon as a mural,” Black explains. “Plus we have power in numbers and there’s this tremendous amount of energy. That goes with the title, too.”

That inspiration shines through, and the artists have experienced that every single day when a veritable paparazzi stands on the street and starts snapping photos of the mural. Schools have even brought field trips to see it. But the excitement and buzz, Wall says, is all they could ask for.

The community supported this public art effort in force to the tune of $75,000. Ten percent of the funds came from two grants supported by BBB tax revenue from the City of Flagstaff, Flagstaff Arts Council and through a Beautification in Action grant. The other 90 percent came from 88 local business sponsorships and community members through two Orpheum-held benefit concerts and two Kickstarter crowdsource campaigns.

The Grand Canyon Wolf Recovery Project became a fiscal agent for the project, and in return, Echo, the gray wolf found in the Grand Canyon and later killed in Utah last year, guards the canyonlands.

“There are lots of little things in here that are significant to individuals, but those stories will move around and be shared,” Dewar says. “I think that’s the best thing about public art, is you’re always painting in public. People access you and ask questions and make suggestions—and you can include it.”

Some theme-defying suggestions like superheroes and dragons naturally wound up off the wall. But with viewers always talking behind their backs, some suggestions were bound to be immortalized in paint, especially with the fundraising opened up to the community.

“We’ve had several people painting birds with us this year and sponsoring birds, which gets people involved and they have ownership over it, too,” Black says.

Mayor Jerry Nabours, who minored in art at NAU, also made his mark with the bright blue bird to the right of the scaffolding’s counterweight. Even over the phone, it’s clear he is exceedingly proud of his addition—something he can always visit and remember.

Nabours explains that what public art truly is can vary. While some past public projects have failed, murals are a welcome addition and specific reason for dedicating BBB tax revenue to benefit the public in the way only art can.

“It takes a downtown alley and makes it a showplace,” Nabours says. “You can’t beat that. It is so detailed and involved; it’s the kind of mural you can look at for a long time. It just makes downtown that much more interesting.”

Thanks to one Kickstarter pledge level, other guests brought the count of cameo-painted birds to almost 20 out of the near 200 soaring across the wall. The falcon, Black says, brought a whole family together. With the artist mixing the color and numbering out the spaces, they were able to paint by number.

Others are memory birds, sponsored by families who’ve lost loved ones. The hawk is dedicated to Black’s high school friend, Thomas Lang, who died in 2013. Black adds, “It was really meaningful to paint that bird for him.”

But the project has not been without stress on personal and elemental levels. The artists learned to read and talk to each other while torrential downpours glued reference papers stories high up the wall. The first year they worked, Dewar says, the building was vandalized a half-dozen times. Last year, the door in the middle of the wall was tagged, but the artists saw it as a sign of respect the mural itself wasn’t hit.

“I think a lot of public space, the way it’s treated or the way it looks—that energy is reciprocated back at it,” Dewar says. “Now this area is becoming more like community space. They’re just going to treat it better because they’ve seen the work that goes into it.”

The artists infused as much of the town in beauty and symbolism as possible to make it a piece that truly works for the public. Black explains they’ve produced the highest-quality work they could have prepared, learning from the piece and each other along the way.

“For me it’s a huge honor. I’m feeling so good about making it happen and following it through, and finding these two to bring it to the next level,” Black says. And even as they speak of their hard work, one passerby shouts, “Good work!” And after two years, countless photos and conversations, they still fire back, in earnest, “Thank you!”

Join The Sound of Flight community dedication at the mural on the east wall of the Orpheum Theater, 15 W. Aspen, Sat, Nov. 7 from 2–5 p.m. There will be free food and photo opportunities with the mural and the painters, plus musical accompaniment by Tow’rs. To learn more, visit www.soundofflight.net. Learn more about the artists at www.skyblackart.com and www.muralmice.com.

Sky Black (center) and the Mural Mice stand at the center of their new mural The Sound of Flight. Photos by Taylor Mahoney

Margaret Dewar of the Mural Mice.

R.E. Wall of the Mural Mice