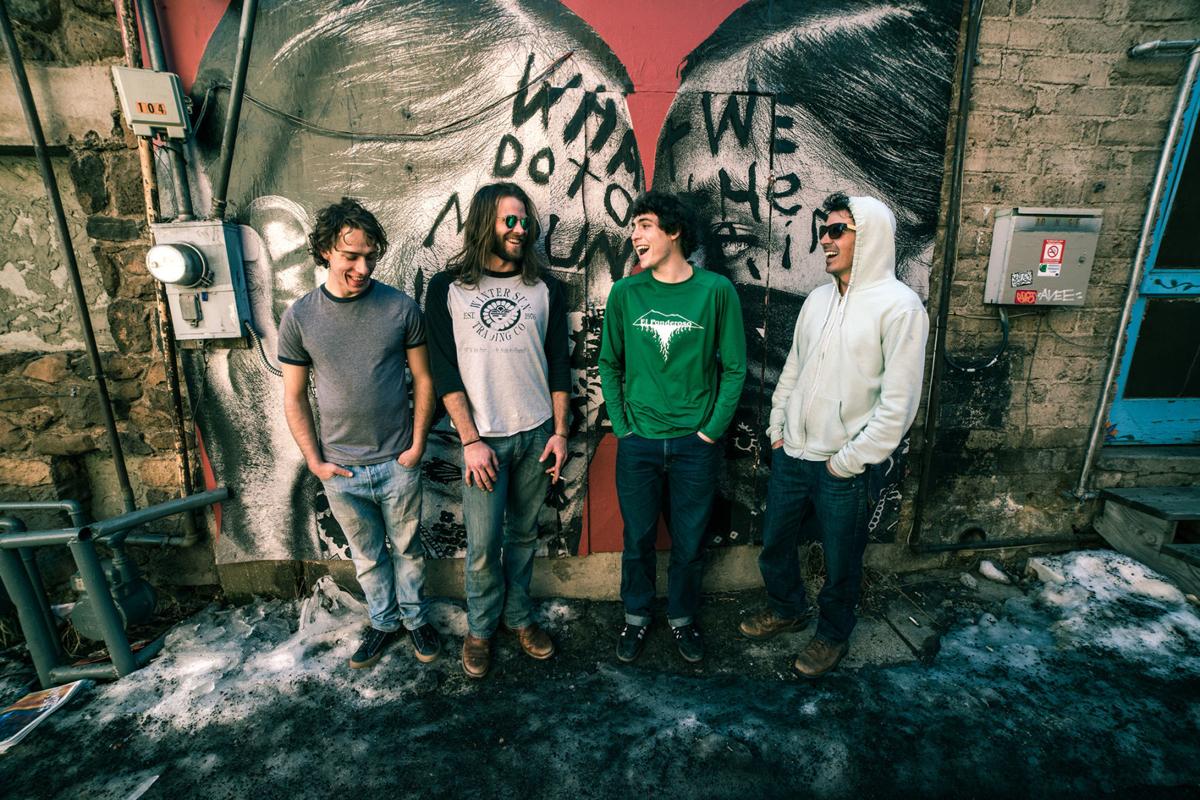 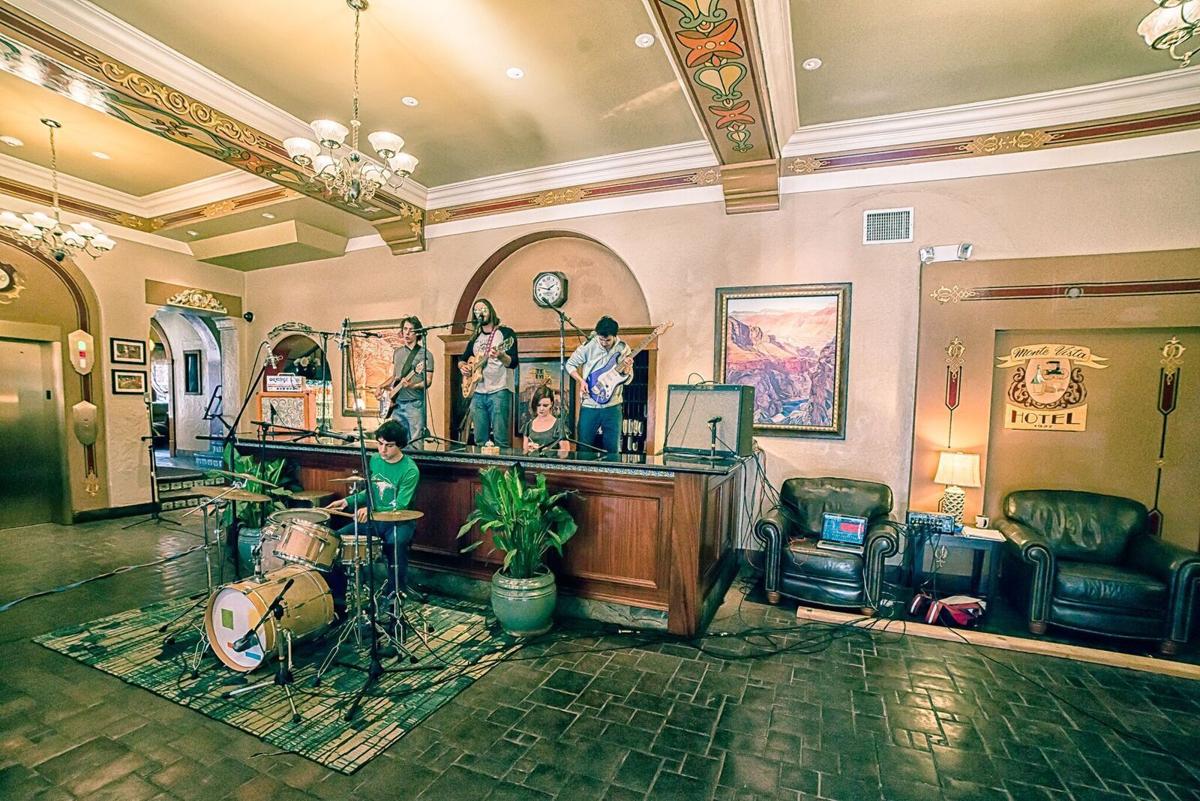 Le Trebuchet recording their 2016 Tiny Desk Concert Contest video in the lobby of the Hotel Monte Vista in February. 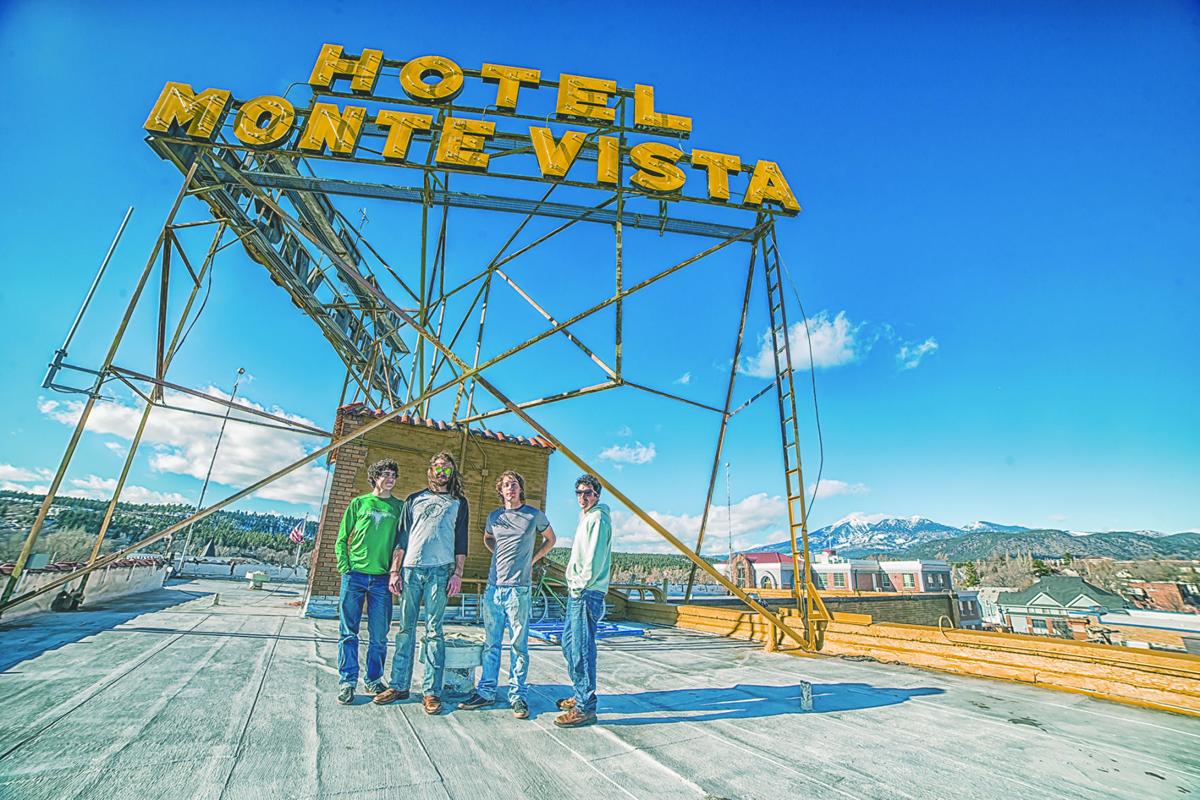 Le Trebuchet on the top of the Monte Vista Hotel. 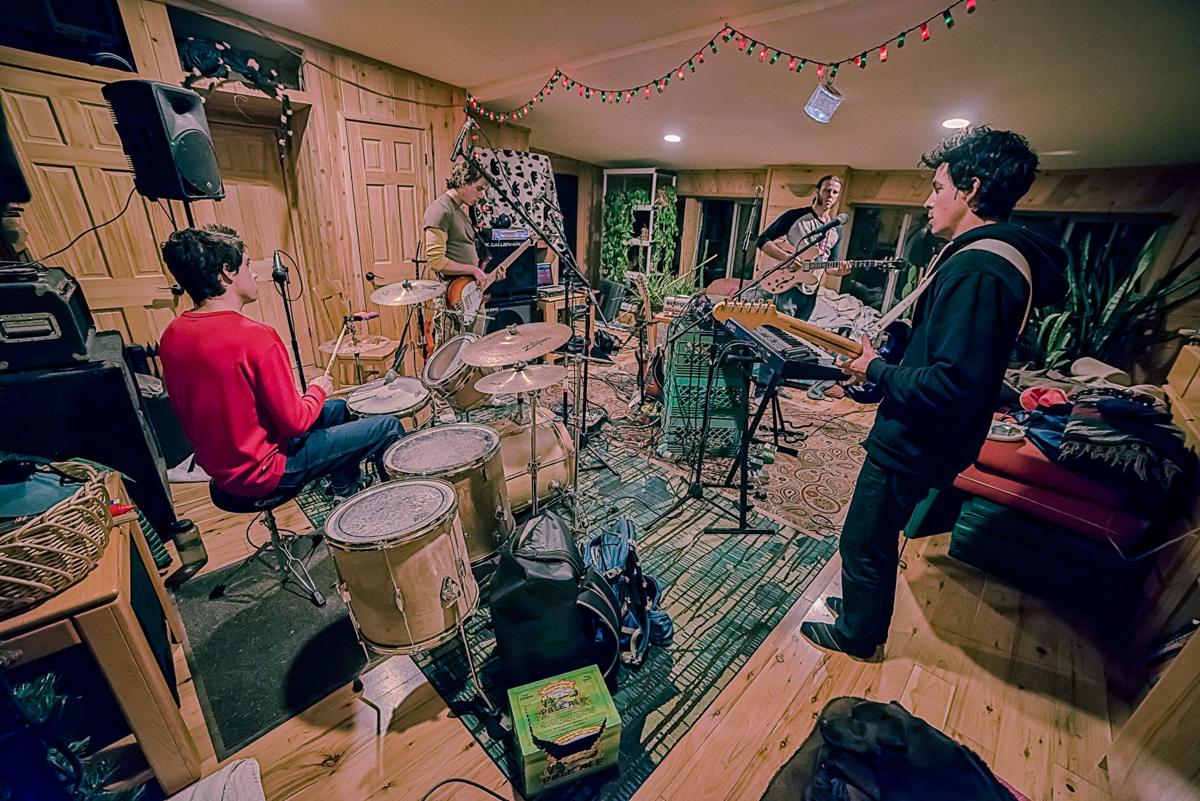 The band rehearsing at a friend’s house off Leupp Road last November. 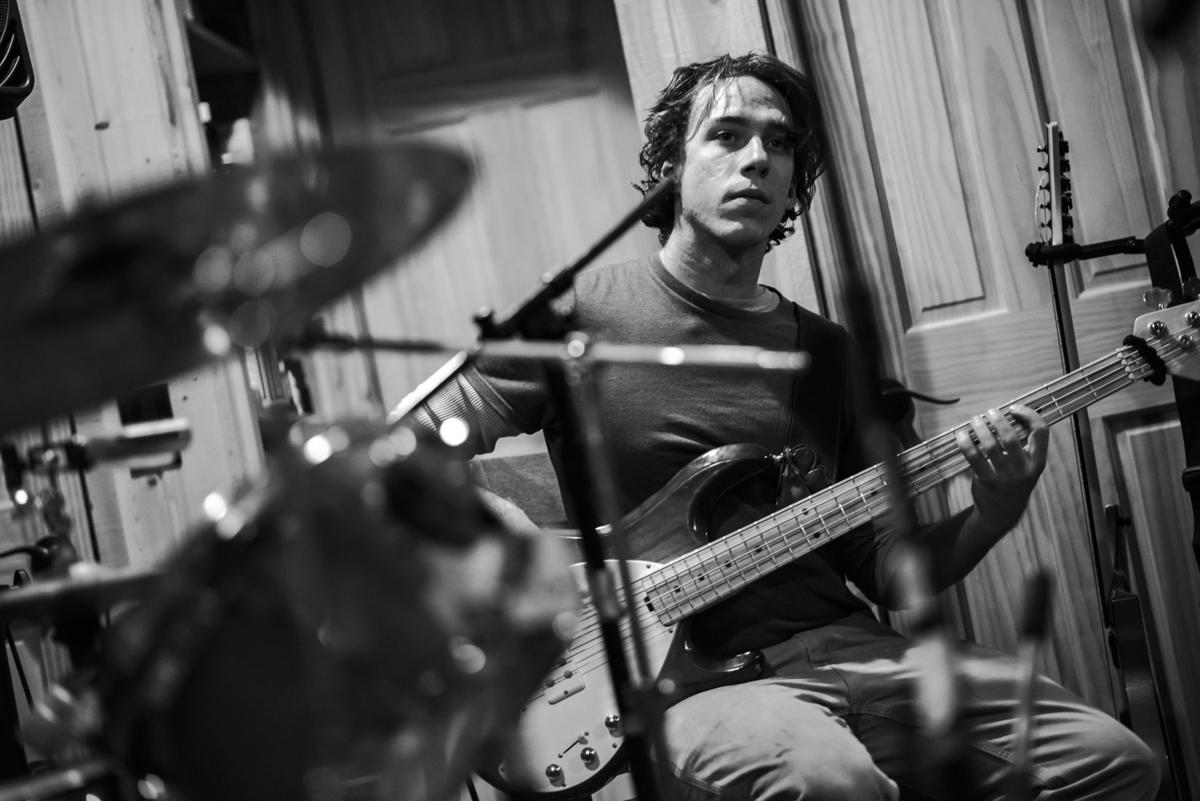 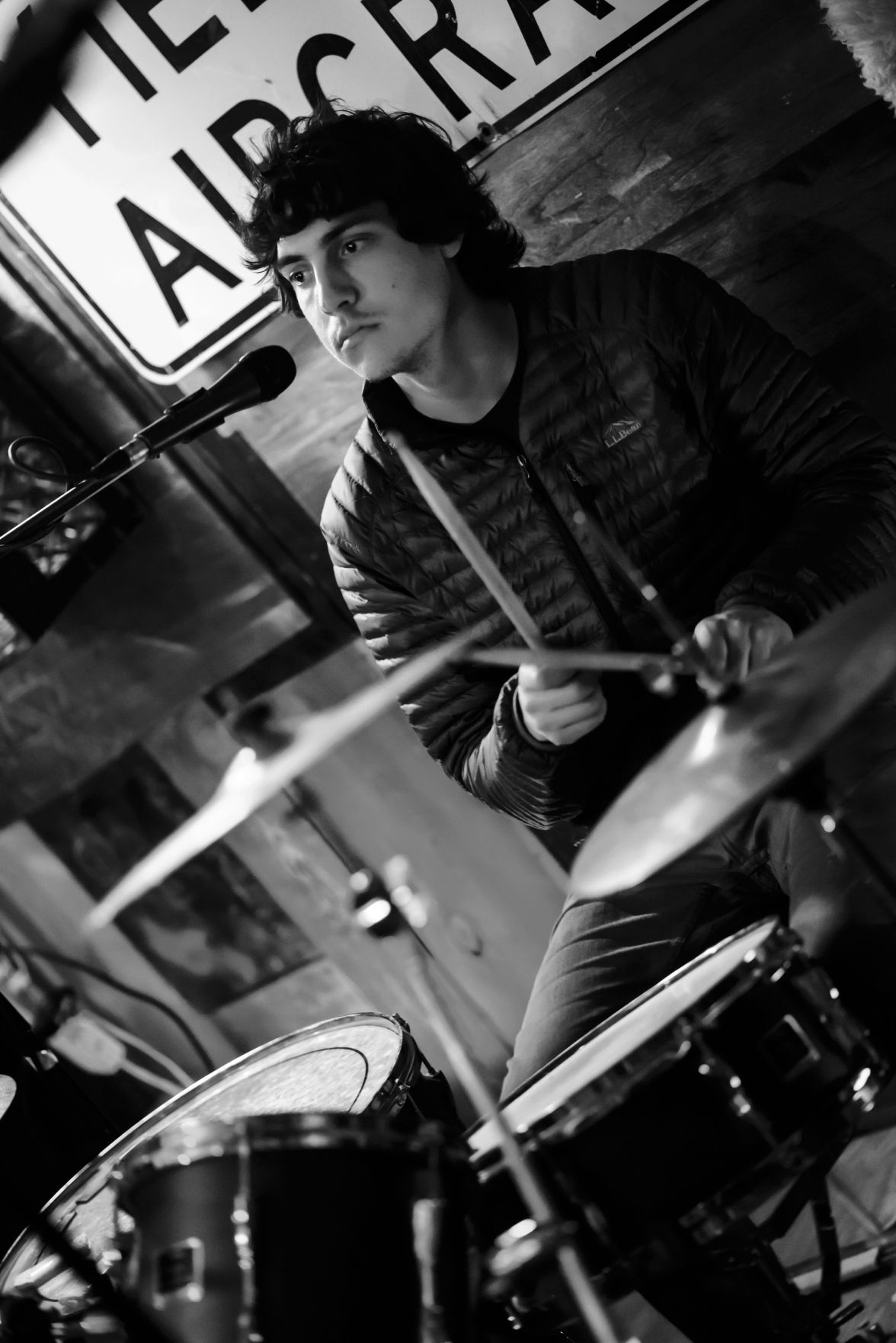 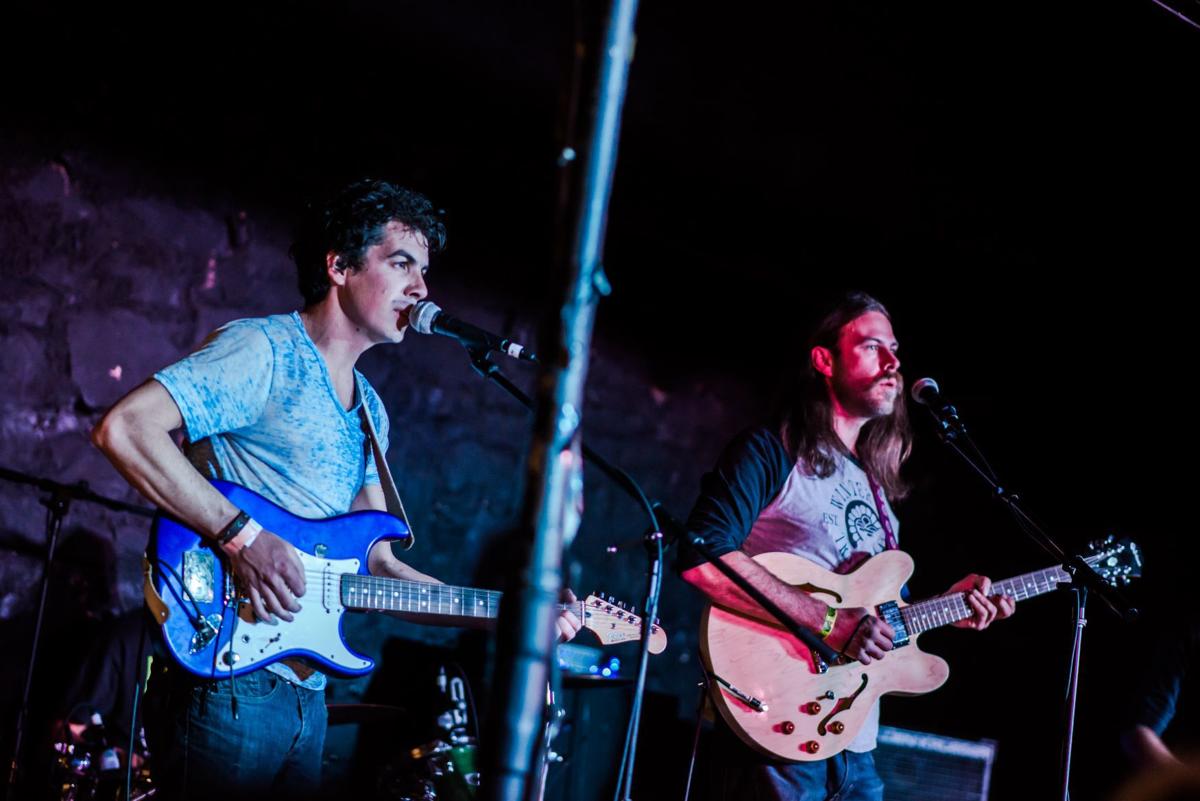 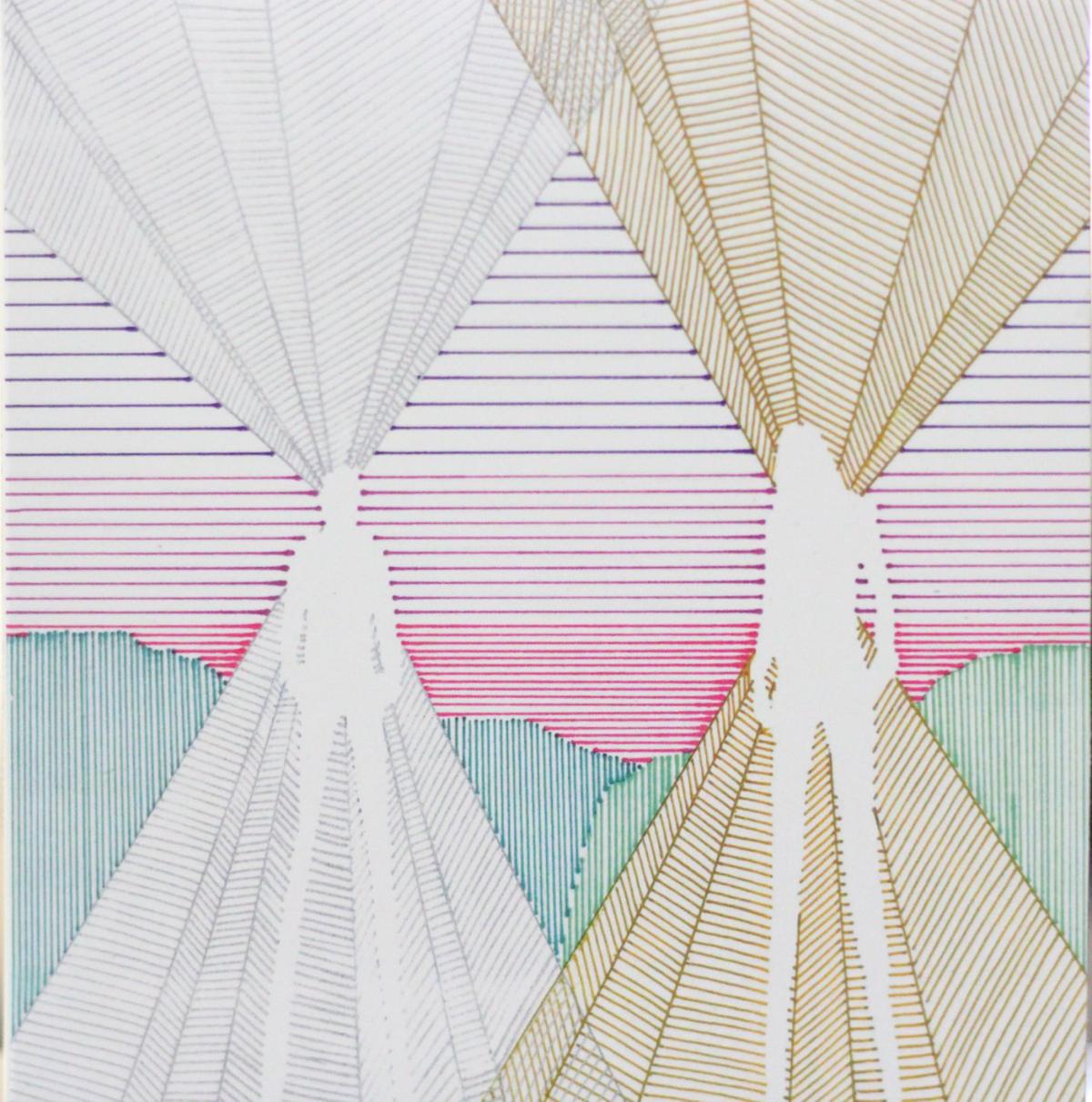 Le Trebuchet will release their debut album, The Overthrow, on Saturday night at the Monte V. 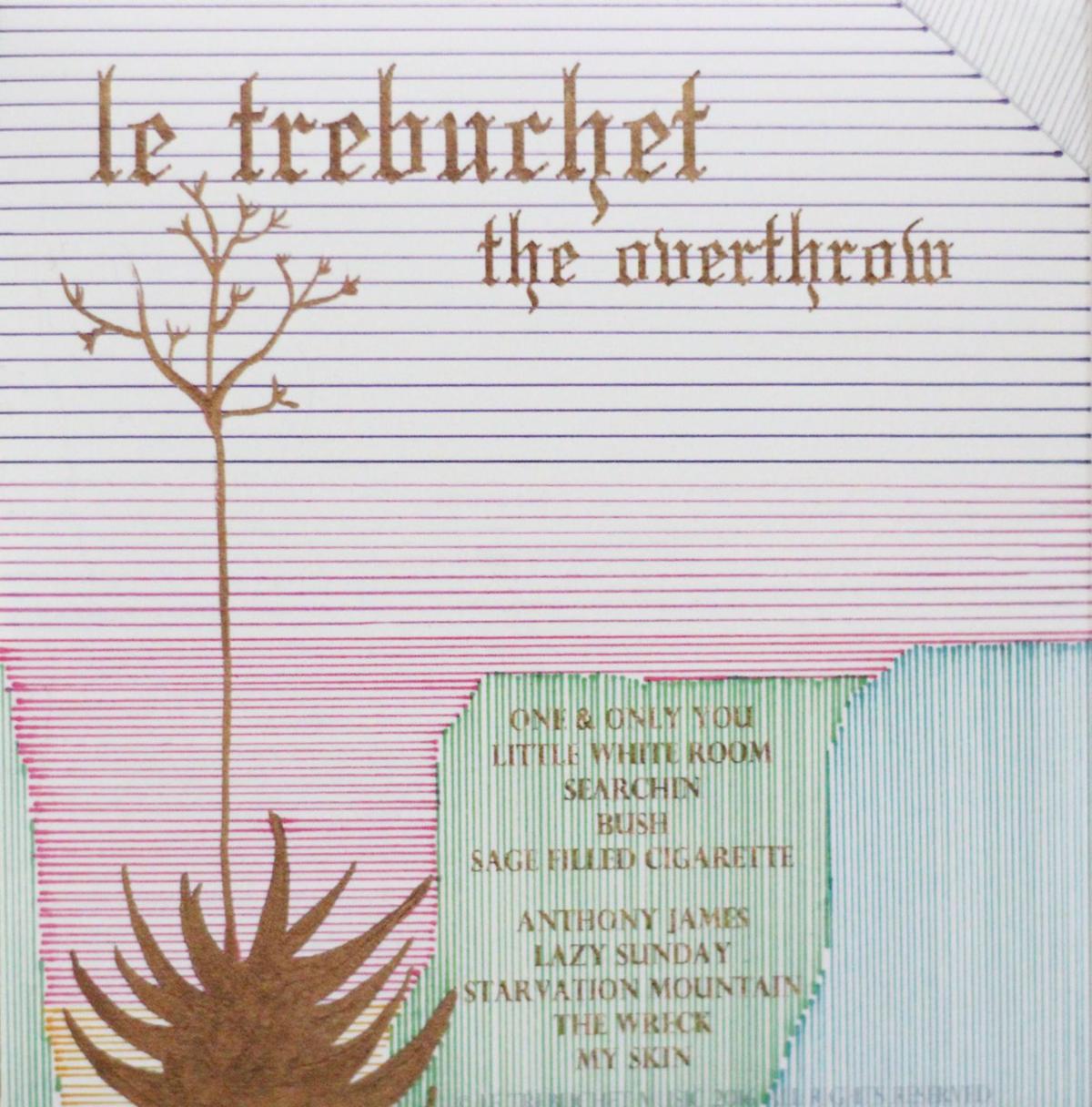 In the vault that is Americana, rock ‘n’ roll remains one of the truest forms of raw freedom.

Long before we had 3.5mm jacks hooking up with AUX ports and mobile devices fit with any number of music streaming platforms synching with just about anything that’ll play a tune, we had the radio. And on the radio was good ol’ rock ‘n’ roll, traveling the country’s airwaves, grabbing young America by the ears as they cranked the volume dial up and rocked out in bedrooms and with cruiser tops down.

It is from this place guitarist Jay Meyer says Le Trebuchet’s debut album, The Overthrow, originates: “It’s [expletive] rock ‘n’ roll. It’s growing up in America listening to the radio.”

And like the new music genre that swept 1950s and ’60s America off its feet, declaring that it was here to stay and converting folk revivalists into rock ‘n’ roll acolytes along the way, that sentiment holds true.

Today, local rock band Le Trebuchet takes firm hold of past and present. Whether it’s their tin shack practice space in downtown’s Southside, marked inside by tapestries lit with swirling psychedelia and a bull skull with a beaded Native American belt draped around its horns eyeing and listening, or the music reverberating through the thin walls out, they mirror the groove that sprouted decades back with their own tinge of desert rock that reflects their home, the American Southwest.

“I used to do lighting for Pink Floyd, so it was a natural progression,” guitarist Jeff Nickell cheekily remarks about the lighting. He’ll also tell you that “aliens” were how the band came to be which, strangely enough, falls in line with the new album’s cover art. Designed by local artist Chelsea Kavanagh, the image sees two figures (Meyer and Nickell) appearing as aliens who are coming to the desert for the first time.

As for how things really took shape, Meyer and Nickell appeared in town separately five years ago. After meeting up busking on a street corner downtown, the fellow guitarists worked through a bluegrass project, Devil Dog Road, before transitioning to folk rock under the name Kingsnake. From there, Meyer and Nickell gravitated toward rock ‘n’ roll and Le Trebuchet—which in French means “too overthrow”—was born.

With a rhythm section consisting of Johnny Escalante on bass and Travis Vergoth on drums, the four-piece set out and recorded The Overthrow in the basement of the Masonic Temple downtown with Jeff Lusby-Breault roughly a year-and-a-half ago. The album was tracked live over the course of four days with 80 percent of the work being completed in that period of time, and the intention of capturing “feel” at the forefront of the recording process.

“It doesn’t come off the same. It comes off sterile or too calculated,” Meyer says about the option of recording with charted material. “That’s the essence. The 80 percent that came out in the first four days is integral to the feel of the rest of the record because the rest of everything recorded after that just floats on top, on the foundation we set.”

And that foundation is solid. The album’s 10 tracks, designed to play through as a Side A and Side B, are filled with slow progressions, catchy guitar hooks and breakdowns that call for multiple listens.

Shortly after the album was laid down, Escalante and Vergoth parted ways due to personal reasons, leaving Meyer and Nickell without a rhythm section and an album that still needed 20 percent more work to meet the other 80 percent in the middle. In the 14 months that followed the two mastered and fine-tuned the album, without a way to play it live, and in search of a replacement rhythm section.

“We didn’t know what we were going to do with it because we didn’t have a band,” Meyer says. “So, in the middle of all this, we’re trying to find another rhythm section and create the new incarnation. It’s not about filling a shoe … It’s about us wanting to continue playing music together, wanting to continue playing rock ‘n’ roll, and not wanting this album to go straight to the gutter before we had a chance to release it.”

Who they found was Alec Tippett (bass) and Alec Mayes (drums). And despite how Tippett jokingly says they came together via Tinder (swipe up for musicians), they are a great fit. As Meyer says about the new rhythm section, they are “animals” with a ton of talent.

“We’ve been jamming with these dudes for six months, and that’s what it is now,” Meyer says. “It changes with the people you’re playing with and this has been a great incarnation of whatever the hell this project is.”

In February, with the new lineup, and The Overthrow finally in their back pocket, Le Trebuchet followed suit to Enormodome a year ago and entered the 2016 Tiny Desk Concert Contest. Over the course of an afternoon, with direction by Rene Rivas and the help of good friends, they recorded a video for the song “Sage Filled Cigarette” from the new album, on the front desk in the lobby of the Monte Vista Hotel.

“That happened real quick,” Meyer says. “Jeff called me up and was like, ‘Hey, we’ve got a week to put a video together to submit to NPR. We just rolled down and set everything up. We had the team ready and it just happened. It’s funny, as soon as the word NPR comes up, everybody’s like, ‘Oh yeah, I’m down.’ It’s like a secret key.”

“It’s like you unlocked one of the three whistles in Mario 3,” Nickell adds, laughing.

Currently, Le Trebuchet is just one of many solid bands breathing new life into the local rock scene with a raw sound that strays away from being too polished or too packaged. Groups like Barrels, the Heebie Jeebies, Coffee Pot, Tiny Bird, Sol Drop and Four Cornered Room among others are paving the way forth. As Meyer notes, “there’s more bands, there’s more excitement and there’s more interest right now in people going to see rock ‘n’ roll bands” in Flagstaff.

“It’s so much more different than when we started playing together three or four years ago,” Nickell adds. “It’s a good time to being doing rock music in Flagstaff. It’s the right time in the curve.”

For Le Trebuchet, the name of the game is finding a balance between joking around, having fun and when the time comes, taking care of business. It’s about staying true to the decades of rock ‘n’ roll that got them to where they are, playing it loud, and jamming—but never going full jam band.

Catch Le Trebuchet when they drop their debut album, The Overthrow, on Sat, May 7 at their home away from home, the Monte Vista Lounge, 100 N. San Francisco. The show is free and gets going at 9 p.m. with fellow Flag rockers Sol Drop. CDs will be for sale for the low (or high) price of ¡paywhatyouwant! For more, dial 779-6971 or visit the band on Facebook.

In bloom: Katie Vernon makes her Flagstaff gallery debut with a surreal series of floral works

This month, Flagstaff’s HeArt Box Gallery and Studio will be featuring the work of artist and illustrator Katie Vernon with her series of bota…

Fresh off of his eight-year artist residency at the Museum of Northern Arizona, Hopi and Tewa artist and musician Ed Kabotie is grateful to ha…

Le Trebuchet recording their 2016 Tiny Desk Concert Contest video in the lobby of the Hotel Monte Vista in February.

Le Trebuchet on the top of the Monte Vista Hotel.

The band rehearsing at a friend’s house off Leupp Road last November.

Le Trebuchet will release their debut album, The Overthrow, on Saturday night at the Monte V.