Highway 89 north of Flagstaff beckons travelers through the high desert, ponderosa pine making way for junipers and pastel mountains in the distance as inhabited buildings become few and far between. When Navajo Nation physician and artist Chip Thomas began wheat pasting some of his work onto the abandoned structures dispersed across the landscape in 2009, it was often without the consent of the building owners, he says.

“That changed after a few months when I met a group of men working to repair their dilapidated stand so they could start using it again. I asked why they decided to start using it again and they said so many people stopped to take photos of the art that they realized they were missing potential sales,” Thomas says.

He began inviting other artists to add their own pieces and spend time on the reservation in 2012. The ongoing accumulation of public art came to be called the Painted Desert Project, which has brought visiting artists from all over to schools and youth programs in Cameron, Shonto, the Chuska Mountains with Navajo Youth Empowerment Services and Navajo Mountain, inviting them to leave their marks behind on expanding minds and crumbling buildings.

This newest addition to the Painted Desert Project, completed in November on the Gray Mountain Whiting Brothers motel, which has been abandoned since 2005, was already drawing people in before it was even completed. Thomas invited Phoenix-based Tohono O’odham artist Thomas “Breeze” Marcus, who also contributed to the Painted Desert Project in 2012, to come up with a design for the two-story building. Breeze in turn invited Los Angeles-based Zuni, Rarámuri and Chicano artist Jaime "Vyal One" Reyes to work alongside him and pretty soon they had more talent on board in the form of Diné painter Jerrel Singer, who grew up in the Gray Mountain area, Apache artist Douglas Miles and Diné artist LivA'ndrea Knoki.

“Of course, people driving along 89 are going to stop there anyway because it is an abandoned space and it’s interesting that way, but they have an additional reason to stop because of the artwork,” Breeze says. “But most importantly, the people who live in the vicinity that are practically neighbors with that abandoned space, they were very positive and receptive of it and so thankful.”

Breeze has been honing his skills for almost 30 years, contributing pieces to galleries in the Valley as well as more large-scale murals showcasing his signature weaving style, which draws inspiration from his heritage and the intricate basket weaving for which the Tohono O’odham and Akimel O’odham are known.

Complementing this abstract component, Vyal’s trademark eyes look out from the walls of the motel, entire worlds held within the irises. The self-taught artist has been contributing to the Los Angeles art scene with public murals, graffiti, museum contributions and brand collaborations for more than 20 years.

“It’s been getting a lot of good response which is what we were hoping for. We want to make people feel that they’re not forgotten about during this time,” Vyal says. “Art kind of helps people feel alive and it’s almost a welcome mat to that strip of road, just giving that whole building a facelift that it needed.”

And it was a fully improvised facelift. Already familiar with each other’s work through previous collaborations, Vyal and Breeze had a quick brainstorming session to discuss general ideas they wanted to incorporate before freestyling the entire two-story motel front.

“One of the things we wanted was for it to definitely be really colorful,” Breeze says. “Individually we work in really bright colors anyway and we knew we could add something that would be much better than what was typically there, just vulgar graffiti that doesn’t really add much.”

The single-level arm on the north end of the motel, where the front office would have been be located, was largely painted by Miles and Knoki who adorned the walls with depictions of Indigenous women on one side, the statement “AMERICAN RENT IS DUE” on the other.

“Stepping away and taking in the entire project from a distance was a pretty ethereal experience, especially as the sun set each day,” Knoki says.

As someone still developing her style, Knoki adds she enjoyed the opportunity to paint alongside these accomplished artists and learn from them while contributing some beauty to the world.

“It can definitely be intimidating working alongside master artists, but it’s also a wonderful opportunity to increase one’s own skill set through keen observation,” she says.

The mural itself is open to interpretation, allowing passersby of all ages to find appreciation in the intricate ribbons of color brightening the desert landscape.

“We’re definitely trying to promote some healing and some life and light into that space, but there’s not really a definition, people take from it what they want,” Vyal says. “We wanted to show that there’s still a lot of natives out doing stuff. We’re still strong, we’re still here, we’re creative and artistic and we’ve always been that. It’s not going away anytime soon.”

The inclusion of public art along that long stretch of highway is an invitation to travelers to take a break from whatever journey they’re on and enjoy something beautiful in an informal, relaxed setting.

“You can drive up, turn on your favorite song and just sit and enjoy, then walk up closely and appreciate the details and even imperfections,” Knoki says. “All of it is inspiring. The colors collide together well and all of a sudden you find yourself grateful there’s beauty in everything—revamping an old historic building, bringing life to a forgotten area, imagining and reminiscing about what life used to be like when the area was in its heyday, family and friendships gone and new ones made over the decades, counting the blessings of sight and then the rest of our human senses, and most of all the beauty of the gift of life, that we have opportunities like this to experience and propel us into pursuing our own dreams and purpose.”

“I enjoy being able to leave behind these gifts of art,” Breeze says. “It becomes a part of the community and those that are able to witness it in person, they can take photos, they can recognize it as a landmark. It becomes a part of their world temporarily and they can have that sense of ownership over it, almost like having a piece of it with themselves, and I think that’s the selfless gift from people that paint public art because you’re putting so much energy into this art and these monumental pieces only for it to be let go in a way, like you’re releasing it into the wild.”

Growing up in Washington, D.C., and the Bay Area in the ‘80s, Knoki says colorful graffiti in public spaces would often catch her eye.

“They were meaningful to me because it meant that art was accessible to everyone—and fun!” she says. “I didn’t have to find a fancy museum, pay, mind my manners and feel stiff learning and appreciating. I could be me to the core and focus on the techniques used to blend, add shadow, dimension and life to a whole host of public areas.”

Thomas says he’s thought often about how creating and viewing art can provide comfort to people, especially now during the COVID-19 pandemic. He cites an informal survey taken this spring in which people were asked to rank jobs from most to least essential during this time.

“Not surprisingly, health care workers were at the top of the list and artists were at the bottom of the list,” he says. “I've not researched this but my instinct is that the time people most need to be reminded of our shared humanity, to be surprised by unexpected beauty and filled with a sense of hope and soulfulness is during times of great privation. Think of the band playing as the Titanic sank or musicians playing amongst bombed out ruins during World War II in the Warsaw ghetto as depicted in the film The Piano. Experiencing art in times of strife can be a sobering moment that instills hope, especially if it's public art created from a place of compassion.

“As you know, the Navajo Nation has suffered greatly during this time of hardship,” Thomas continues. “I can't speak to how others see the work during the pandemic but I know what it does for me both making it and seeing it. And that's coming from someone representing the most and least essential workers during the pandemic.” 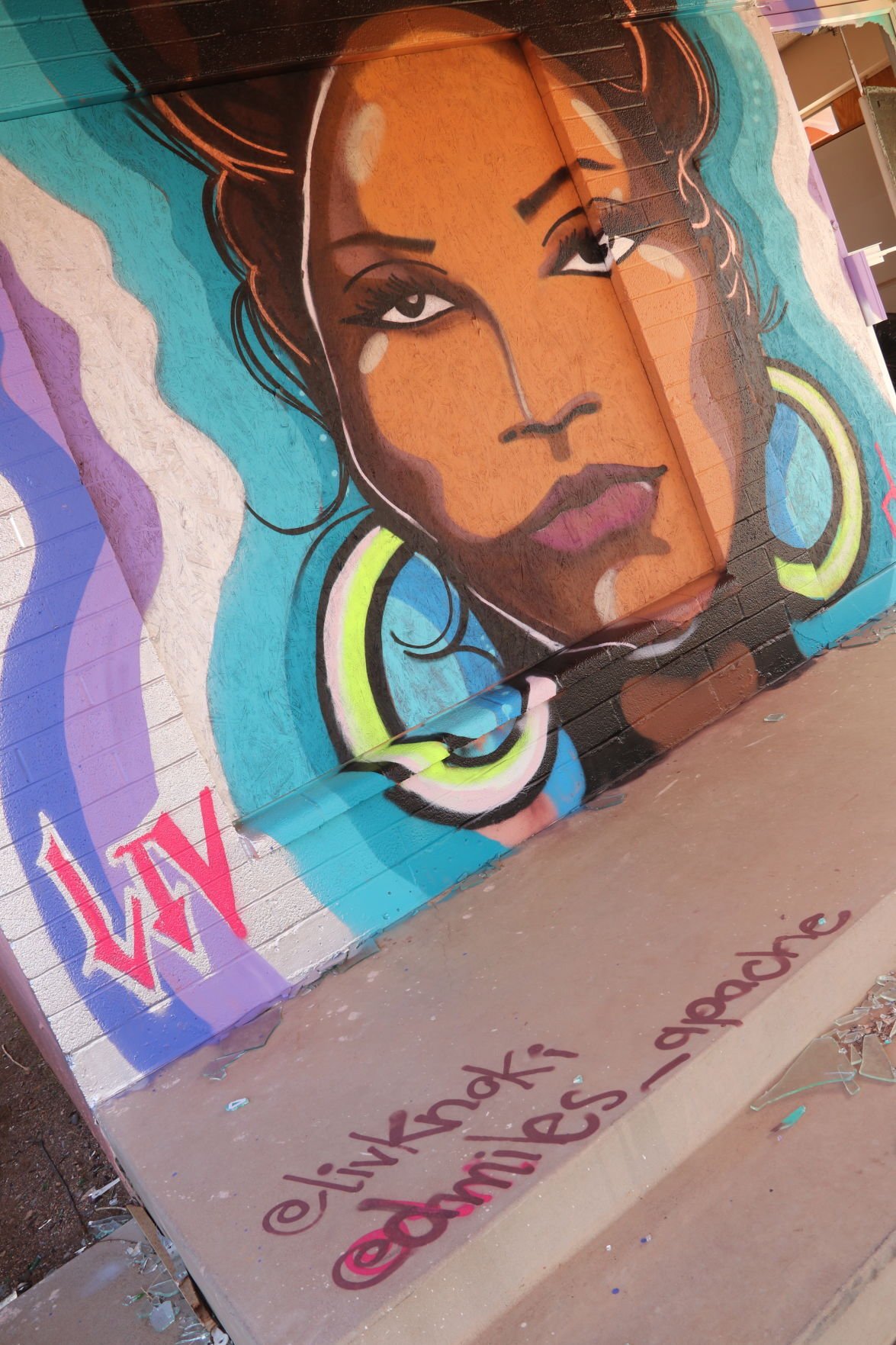 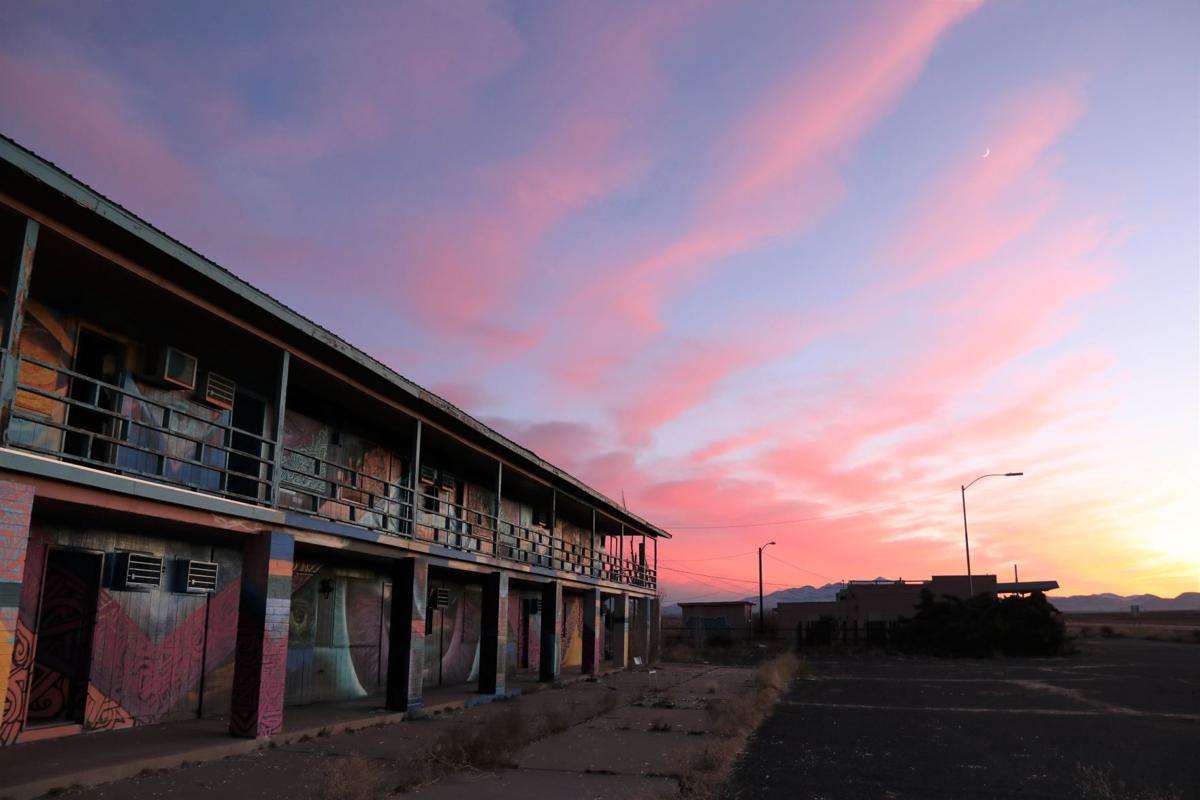 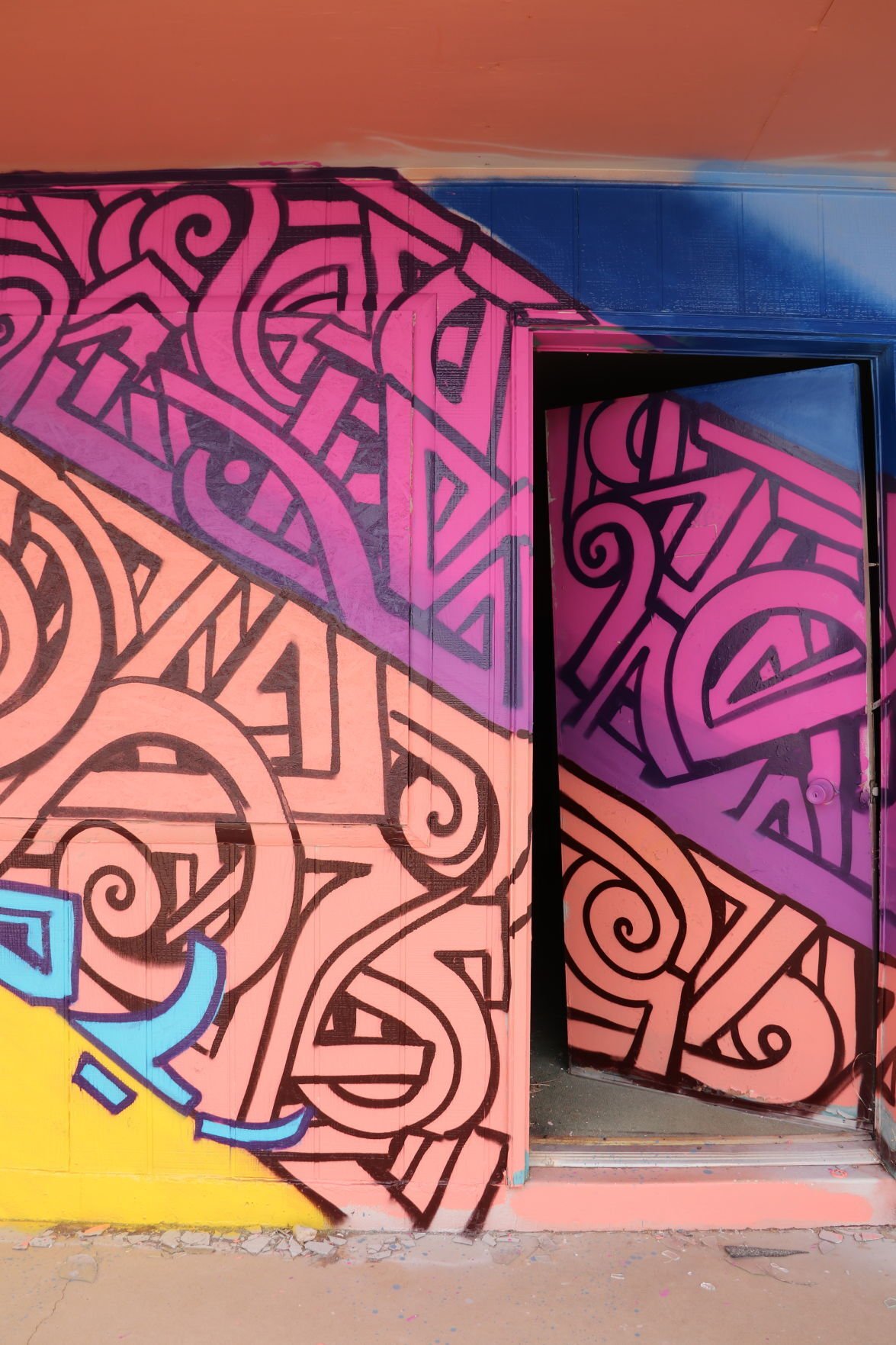 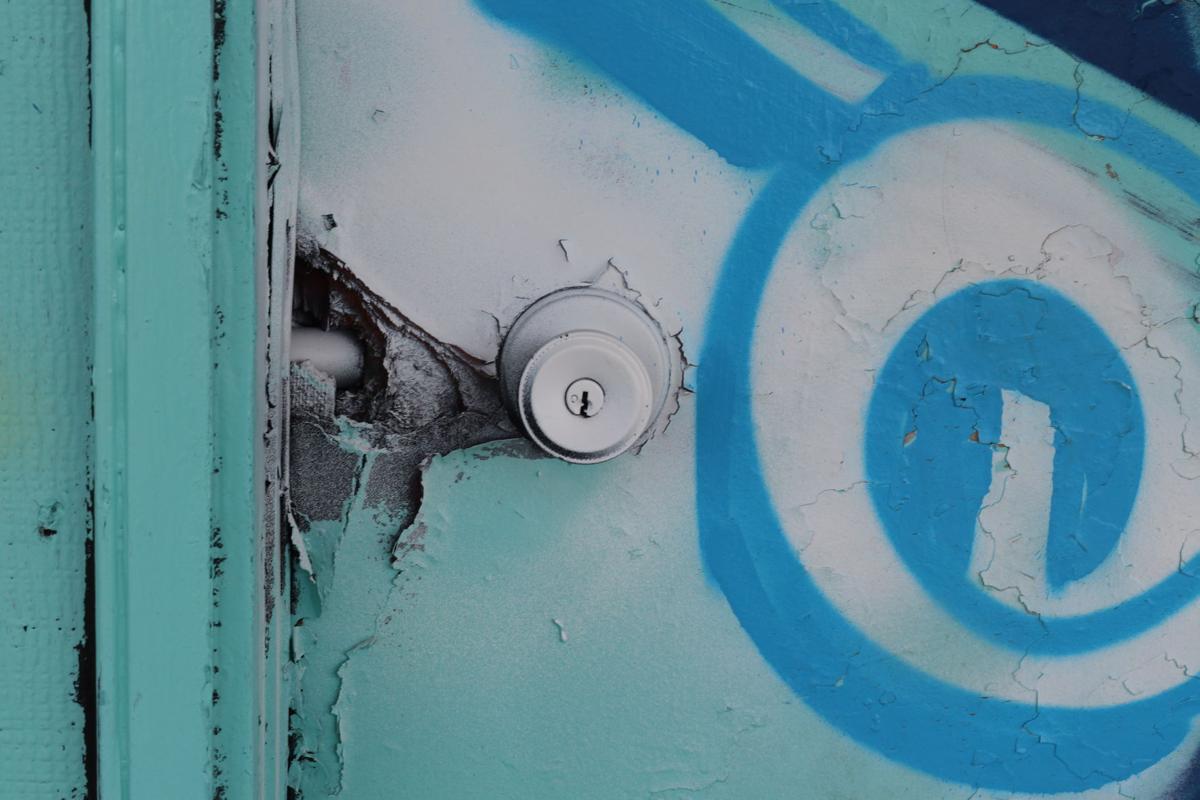