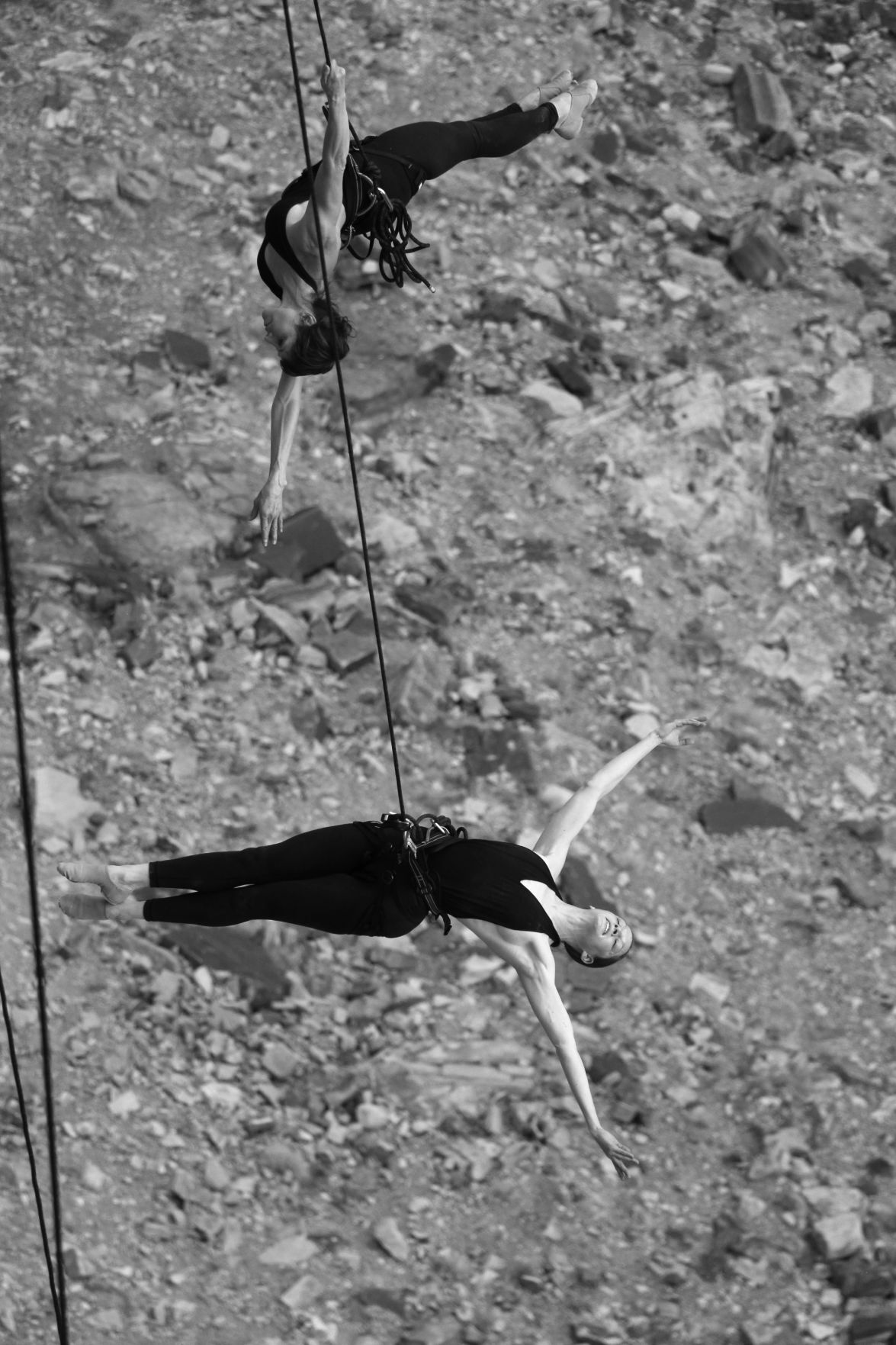 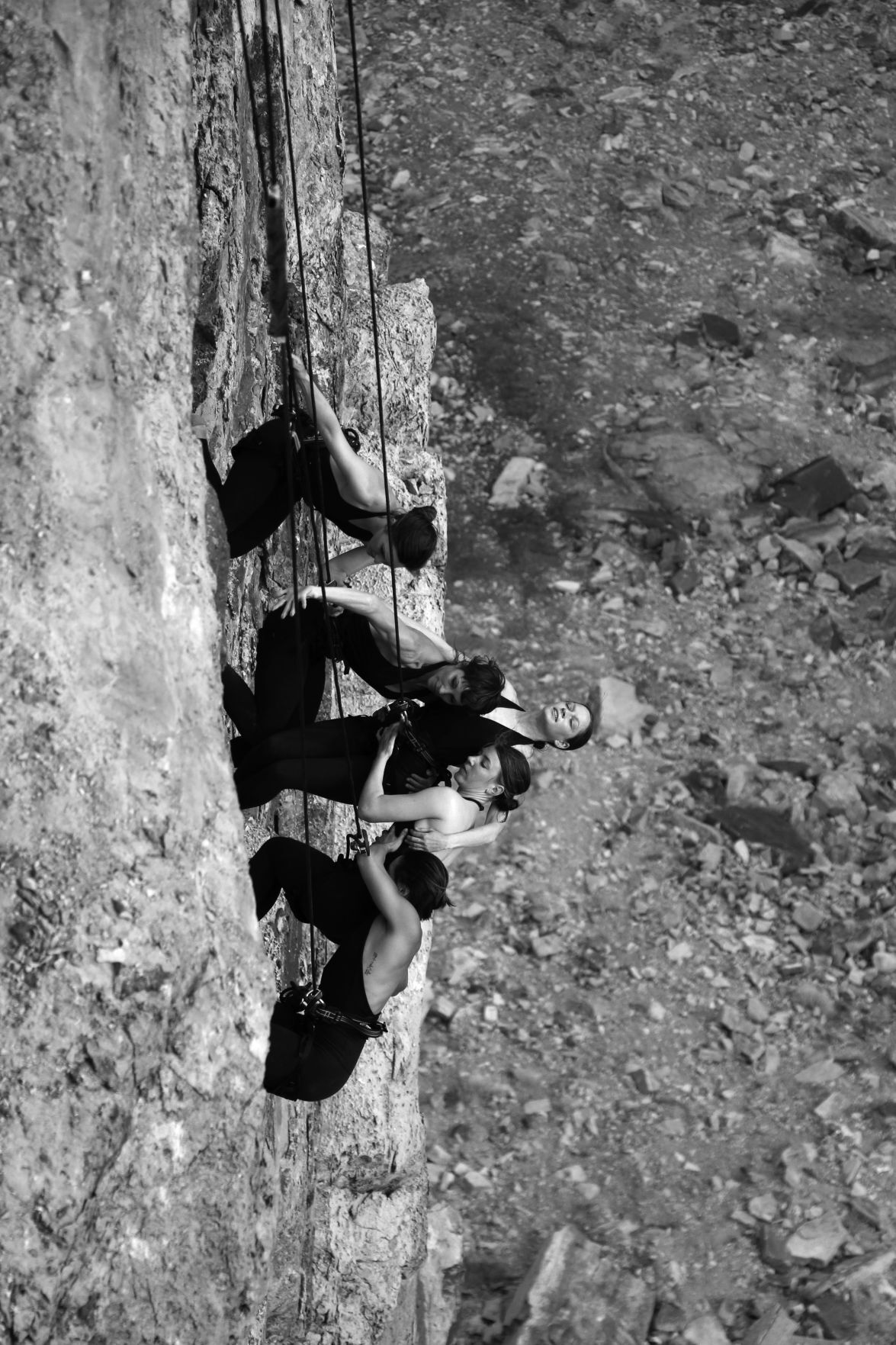 Facing a sheer 1,000-foot drop, rather than turn back toward the familiar, the performers of Dark Sky Aerial chose to leap into the unknown.

Carefully calculated rigging points and uncomfortable safety gear aside, the ambitious dance company turned to the dramatic northern Arizona landscape this past spring to film their newest project, "OMEN," and share the beauty to be found in surrender.

Since the founding of Dark Sky Aerial in 2014, the company has developed its unique brand of translating vulnerable emotions through movement with their past Viola Award-winning ambulatory projects "OPIA and "TILT." Both featured aerial and harness dance with live audiences.

DSA partnered with Sandcast Media for "OMEN" and filming was completed this past spring. The performers and crew spent three days on the rim of the yet-to-be-disclosed canyon they chose to serve as the backdrop, waking up before 4 a.m. to capture the soft dawn lighting.

Sandcast Media is made up of Harlan Taney, Justin Clifton and Blake McCord, each an artist, rock climber and rigger familiar with what it takes to make outdoor adventure films. Despite this, they faced an entirely new obstacle when it came to capturing "OMEN."

“Instead of making a river rafting video or something like that, this very traditional canvas for them transformed into something completely different,” Chan said. “I remember them saying, ‘This is the most amazing thing we've ever seen.’ It’s like, you've been in this location multiple times doing multiple things and all through the canyon, so that was really neat too, to see that perspective of how we changed their canvas.”

The filmmakers had to figure out how they would get the shots necessary to tell the story with limited ground for them to stand on. They also dealt with physical toll on top of that, with the performers hanging off the cliff for up to eight hours throughout each day as the weather shifted from below freezing to sweltering.

“You can see it in the video where Myra’s literally shivering as she's walking to the edge of the cliff,” Venezia said.

“Which really works for the grittiness of what we wanted to capture,” Garcia added. “But on the inside we were like, ‘That girl is freezing.’”

In between filming each shot, the performers supported each other physically and mentally through the temperature changes and working through newfound fears of heights.

“We literally huddled to keep each other warm and then when it got so scorching hot that our skin was burning, we would take turns applying sunscreen to each other and even create shade for each other,” Venezia said.

Although each performer remains active outside of dance through sports like mountain biking and running, they agreed it was the most they’ve pushed their bodies. Chan, a registered dietician and co-owner of EVOLVE Flagstaff, took on the role of ensuring everyone stayed hydrated and ate snacks while on the cliff.

“Physically, even though you're just hanging in a harness, you're utilizing so much energy because inherently your hip flexors and quads are working, and core is working to keep yourself upright,” she said.

“I feel like our whole group, including the crew, kind of entered this alternate state of mind and state of experiencing the world. I personally just did not want to leave. I was like, ‘No, this is it now, I camp here now all the time,’” Dove-Robinson said with a laugh. “We just entered that flow state of creativity and being in the moment, whether it's an extreme moment that you want to end or going into another moment that you never want to end.”

The completed film will premiere to audiences this week with three screenings on Saturday, as well as an accompanying documentary on the making of "OMEN" from Nick Geib of Firewatch Media. The organization previously partnered with Firewatch to film the live "TILT" and "OPIA" shows.

“We love the way that he captures our story and we feel like he really understands the ethos of our company,” Garcia said. “He's able to communicate our message to our audience in a way that feels really authentic to our goal.”

“I even feel like Nick is part of our company,” Chan said. “I can't imagine doing anything without Nick because we can create our story and tell our story, but he's the one who actually is able to turn that into a whole different story and put that out to the masses. He’s just such a huge part of everything we've ever created, and watching him evolve as an artist too has been really a beautiful process.”

At the end of it, the performers were able to bond deeper as a company after struggling to keep their creativity alive following the high expectations they felt following the success of "TILT."

“One of our tenants is friendship, and for this project we got to camp together and be together for days on end and do what we love,” Garcia said. “So regardless of the freezing temperatures or the baking heat, or how tired or hungry or thirsty or scared we were, we were still making it.”

"We were together,” Venezia said.

“Which felt so amazing after not being together because of the pandemic for so long,” Garcia continued. “Being able to hug one another, be vaccinated, be able to see each other's smiles and dance together was really meaningful.”

Dark Sky Aerial’s "OMEN" premieres Saturday, June 26, with three screenings of the film and accompanying documentary at 3, 6 and 8 p.m. at Momentum Aerial, 1802 W. Kaibab Lane, Suite #40. Tickets are $30, or $20 for children 13 and under. A discussion with the artists, filmmakers and riggers will follow the screenings.

Visitwww.darkskyaerial.com for more information and to reserve tickets.

A Flag Live! guide to fall festivals and events

Here’s our comprehensive guide to all the festivals and events happening in Flagstaff.