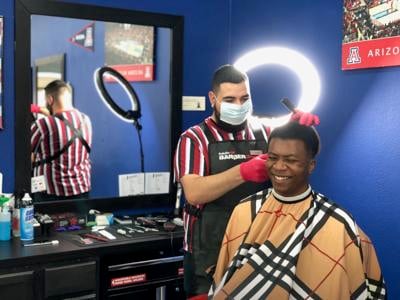 Inside Kuttz Barber Shop & College, located in a strip mall on Flagstaff’s east side, owner and barber Jabar Nichols is explaining his expansion plans to a small group of friends.

“We’ll have the same kind of black and white checkered tile in here,” Nichols says, pointing to the bare concrete subfloor. “Chairs all along that wall.”

Since Kuttz opened its doors 15 years ago, Nichols has had his eye on transitioning the shop into something more, as a way to create more career opportunities for aspiring barbers. This vast room, next door to the landmark barber shop, is only the next phase in the realization of Nichols’ dream of opening the first fully accredited barber college in northern Arizona. Currently in the pre-candidate phase, the entire process will take roughly a year.

“I wanted to create jobs for people, you know what I mean? A lot of kids I know, they don’t want to go to a four-year college. [This] gives them another option. Shit, if you look up barbering on the internet they say we make $30K a year? My first student Jacob Cruz, Ace, he made $80,000 his first year,” Nichols says proudly.

Nichols currently employs seven student barbers at the shop, and has accommodated more than 30 barbers as they cut and buzzed their way through their apprenticeships.

“I got students from all over Arizona, one from Chicago, one from San Francisco, Cottonwood, Prescott, Winslow. I guess about five years ago I started taking on students like Ace. I graduated 32 students since then and all of them is cutting hair. All of them,” Nichols says.

In the coming year, the plan is for Kuttz to be able to provide full instruction to aspiring barbers as well.

“Kind of like a regular college setting,” Nichols says of the soon-to-be college. “PELL grants, students can get bank loans for school, everything a local college can get. Same thing, same thing.”

The idea for the barber college had been planted years ago, but plans have rapidly begun to blossom over the past year with help from friends like Dr. James Joiner, a professor of philosophy at Northern Arizona University who the barber has known since childhood. Right before the COVID-19 pandemic hit, the two traveled to Tampa, Florida, to register the school for accreditation.

Next door to the expansion, the shop and classrooms are immaculately clean, with checkered black and white tile floors and a signature barber pole at the door. Arizona college sports merchandise and posters depicting different haircuts and styles of facial hair are proudly displayed along the mirrored walls. Nichols shows off a sign advertising a product called Blessed Hands Hair Pomade for Men.

“One of my barbers invented that,” he says, beaming. “He makes it himself.”

It is Nichols’ personal journey to the trade of barbering that has played a large role in his current desire to mentor and teach others.

“In and out of jail got me into it. There was a fork in the road,” he explains.

Born in Flagstaff, Nichols lettered in baseball, basketball and football while a student at Flagstaff High School. After he graduated, though, the road ahead proved rocky.

“When you’re Black you got three options: go to college for sports, join the military or sell. Drug dealing is us growing up,” Nichols says.

He took the last path, one that rapidly led him to many a dead end along with run-ins with the law. After a few arrests and a brief stint working at the Flagstaff Guidance Center, Nichols was hired at a Conoco gas station in town, which proved to be the turning point in his career and life.

“Working at the Conoco is where they taught me how to run a business. Once they made me a manager they taught me how to make deposits, how to manage employees, they had me managing 20-plus people. I learned how to do customer service, which wasn’t anything that came naturally to me, you know what I mean? I told my boss that I could just stock the cooler, and they were like, ‘No, you’re going to get out there, talk to people.’ That really got me out of my shell,” he recalls.

He is quick to acknowledge how important that gift of conversation proves when working from the barber’s chair.

“In the barber industry, you got to make good conversation. I had a barber once who couldn’t cut for shit but he’d make six times what the other guys would make. Most money, worst haircuts, but the gift of conversation—he had it,” Nichols says with a smile.

That job at the Conoco proved auspicious in more ways than one. It was during a slow shift at the gas station in 2004 when Nichols read an article in Flagstaff Live! describing the state of barber shops in Flagstaff.

“It was saying all the barbers in Flagstaff was retiring, the industry was getting extinct. Joe, my boss, the owner of the Conoco, he was like, ‘If you get your [barber’s] license, I’ll help you get started.’ And he did. In fact, Joe’s been helping me with this remodel next door.”

The rest, as they say, is history.

“It made sense. My mom was a cosmetologist, and I started cutting hair in high school. I didn’t know what I was doing until around 2004, 2005,” Nichols says with a laugh.

It was then that he attended Universal Barber College in Phoenix, studying under Mr. Arthur Knox. Nichols sites all aspects of his past as playing a role in his success as a barber.

“I applied all the things: teamwork from being in sports, the business side of things from the Conoco and what I learned in the dope game. But I knew that once I was making money as a barber, I wasn’t going to deal,” he says.

The barber acknowledges the reputation of many barber shops as fronts for drug sales.

“Selling drugs gives us [barbers] a bad name, makes our name raggedy. I wasn’t about that,” he says.

Ever since he hung that barber pole and sat his first patron down in the chair, Nichols hasn’t looked back.

Kuttz is a thriving cornerstone of the Sunnyside community. On a recent Tuesday afternoon, there were young Black men and white men, Hispanic and Native men sitting in chairs getting fades and trims. There was laughter and music playing. All the barbers wore masks as an extra health precaution in light of the pandemic. A student barber stationed at the front door took the temperature of everyone before they entered.

A cross by the door also signifies Nichols’ faith, something he’s not shy sharing.

“I thank God all the time, he really changed my life,” he says. “My grandma Ruby Taylor put that in me a long time ago. Anything go wrong, she gave me that guidance. She was the light, anything she say was gold. I believe in God still today. He always shows me things, like the shop, the barber college. He always gives me that vision.”

Kuttz Barber Shop & College is located at 2219 E. 7th Ave. Visit www.kuttzbarbershop.com or call 779-6011 for more information about the college or to schedule an appointment.

In bloom: Katie Vernon makes her Flagstaff gallery debut with a surreal series of floral works

This month, Flagstaff’s HeArt Box Gallery and Studio will be featuring the work of artist and illustrator Katie Vernon with her series of bota…

Fresh off of his eight-year artist residency at the Museum of Northern Arizona, Hopi and Tewa artist and musician Ed Kabotie is grateful to ha… 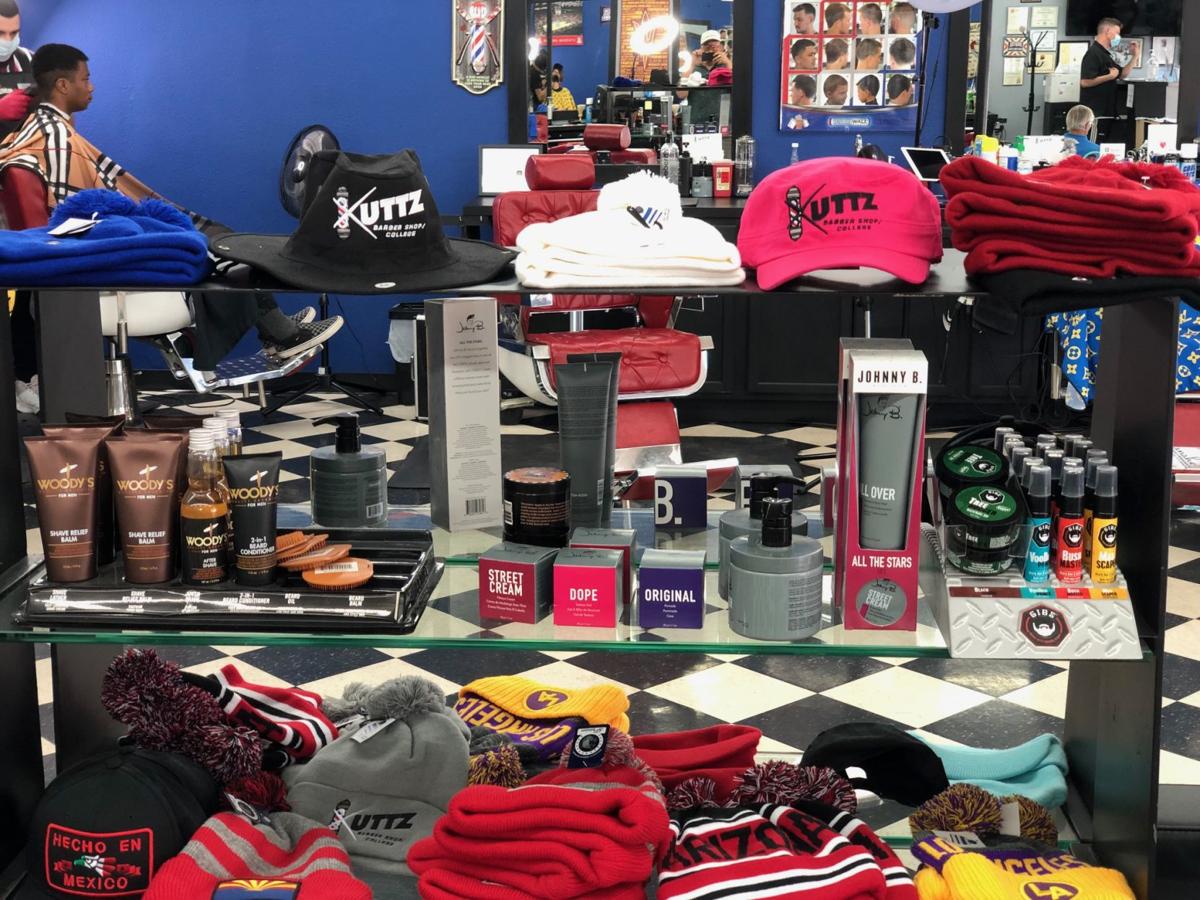 Kuttz offers a variety of hair products and merchandise to customers. Photo by Tim Taranto 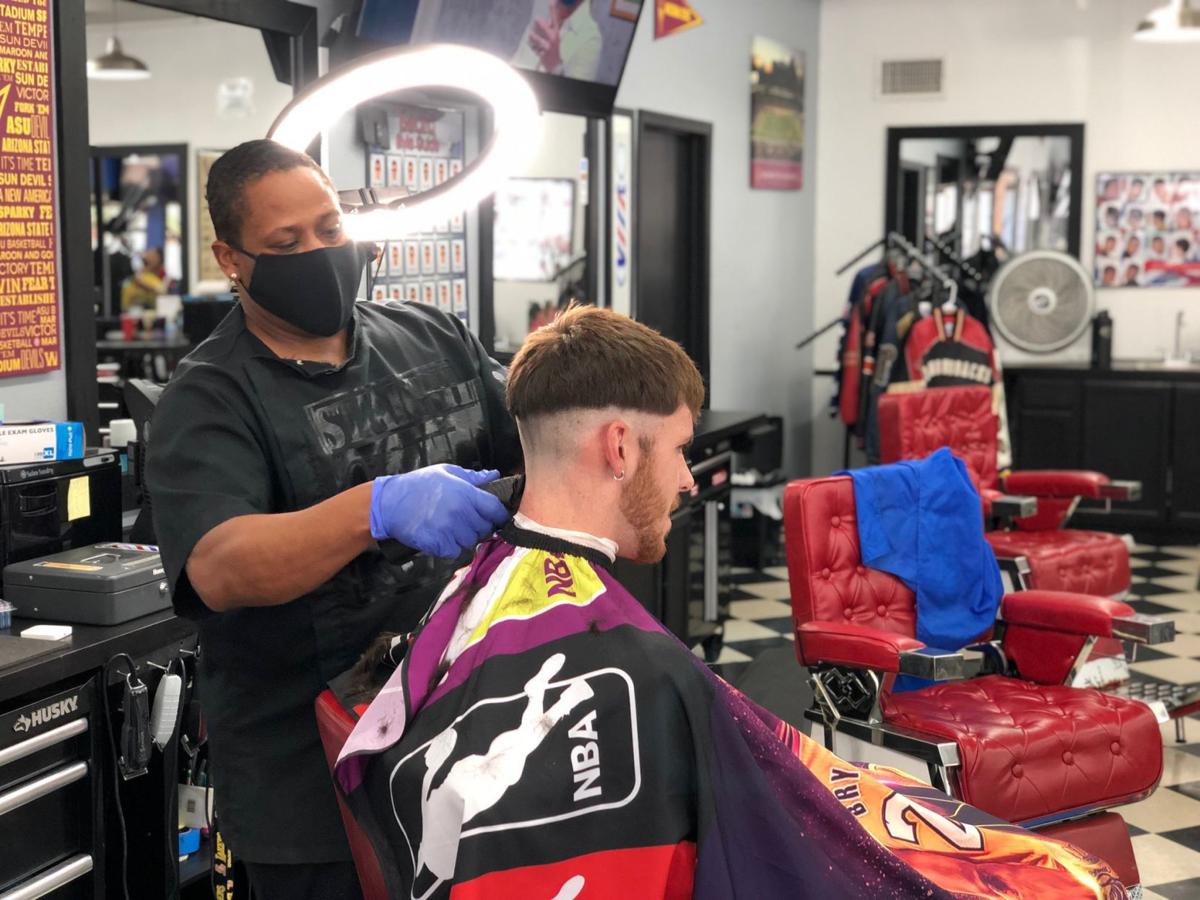 A student barber works with a client. Photo by Tim Taranto 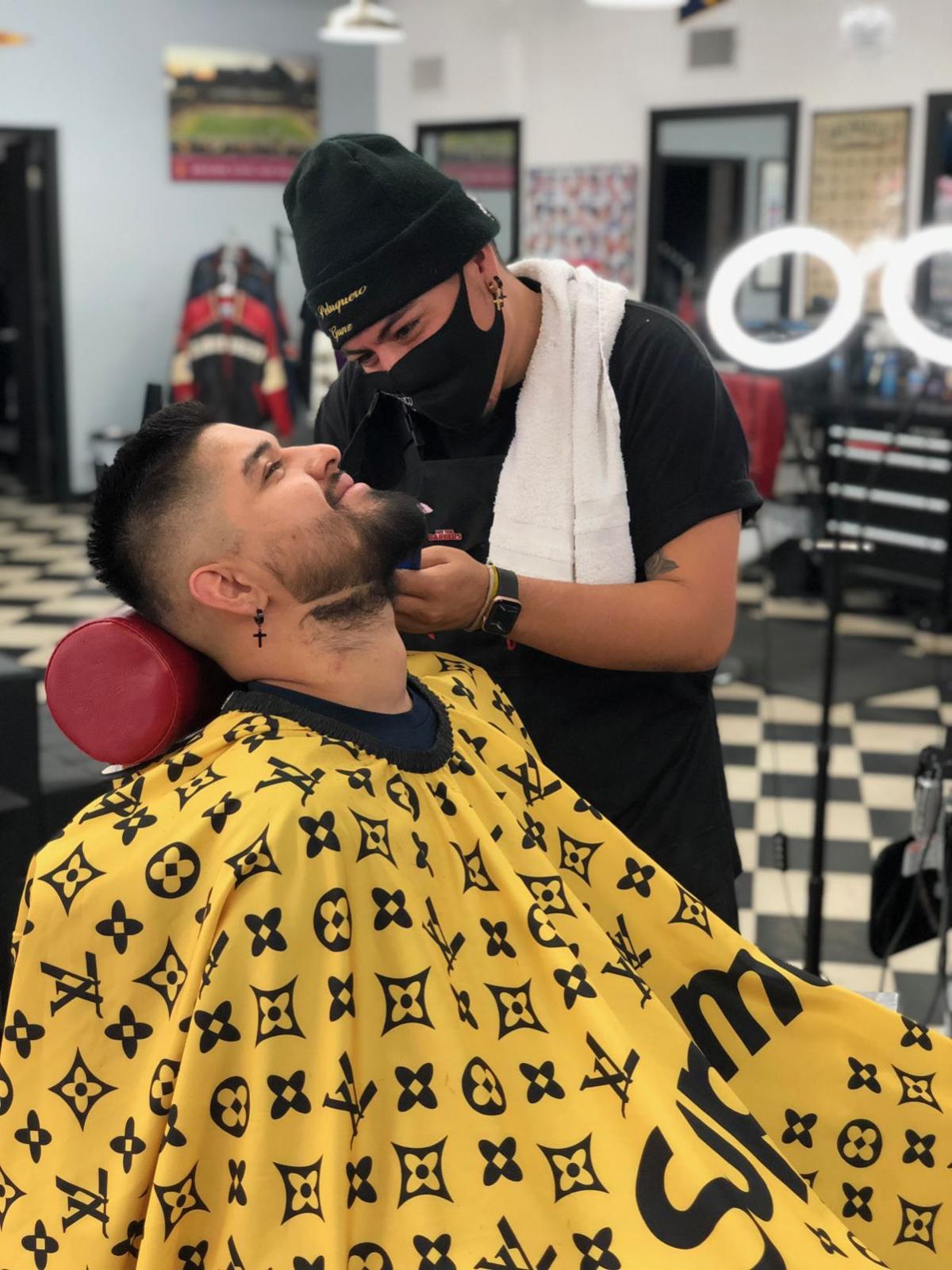 Students at Kuttz are provided with the skills to become successful barbers. Photo by Tim Taranto 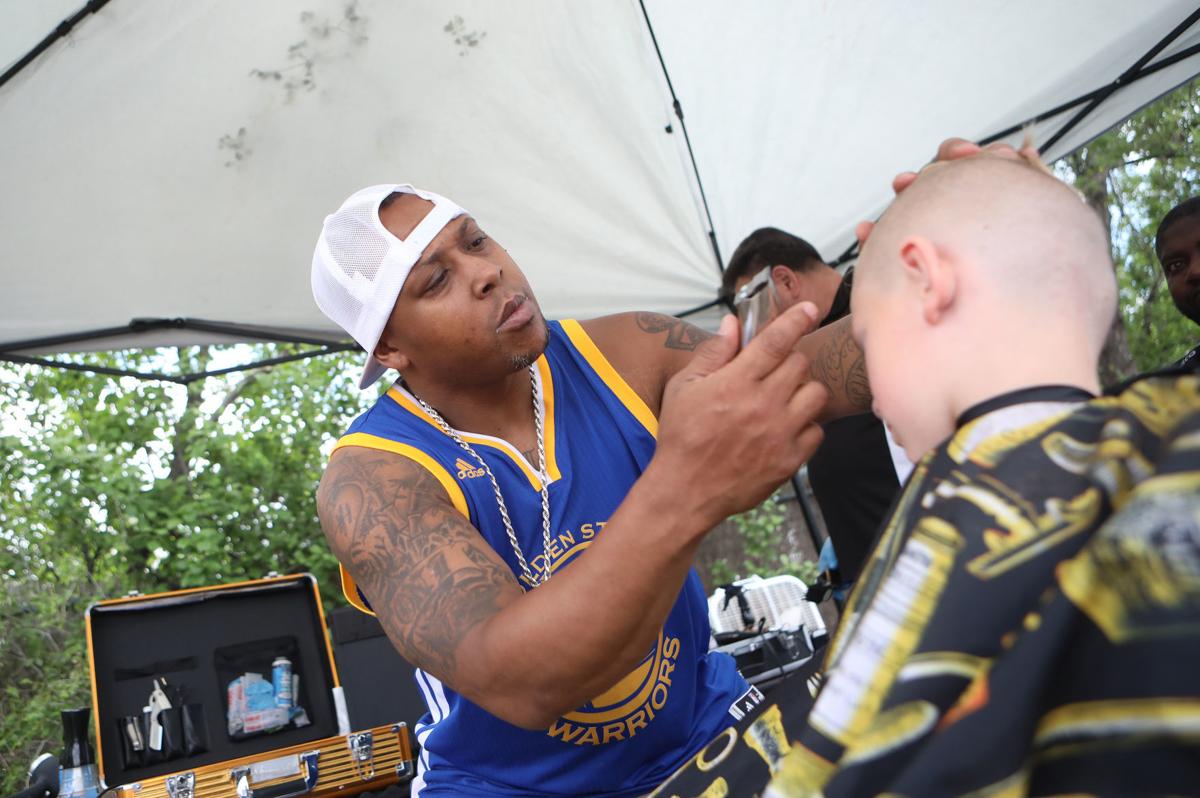 Jabar Nichols finishes up a haircut during last year's annual Juneteenth celebration at the Murdoch Center. Photo by Ben Shanahan