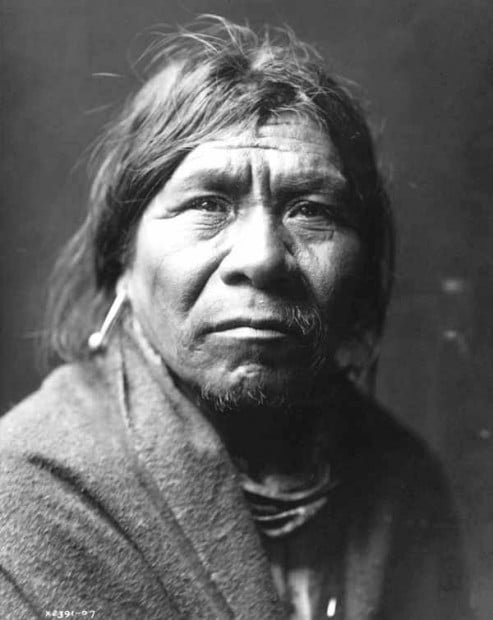 For the last nearly 1,000 years, the inhabitants of the canyon have been Havasupai. This ancient tribe is now sharing its unique and ancient origins, history, art and culture with the general public.

They are saying "Miiyuuja" in the Havasupai language, which is "Welcome" in their second language, English.

The telling of the tale of their ancestors begins today in a public reception at the Museum of Northern Arizona, as the Havasupai people bring their tale to Flagstaff in "I Am the Grand Canyon: The Story of the Havasupai People," a photographic exhibit that will be on display at the museum through April 26 (see box).

The tribe has about 600 members today, with only about 50 living away from the tribal base in the village of Supai, Tilousi said.

"We are very pleased that the exhibit is going to document the story of Havasupai and the culture and we are eager to promote some of the things that are happening in our village to people around the world," she added.

The exhibit is owned by the tribe and was developed by the Grand Canyon Association, with the guidance and blessings of the Havasupai people.

Tilousi was an elected official at the time the tribe signed the paperwork to make the exhibit collaboration possible.

Included in this wide-ranging show are historic and contemporary photographs of the stunning homeland of the Havasupai people — some never before shown — and examples of their music and language, one of the oldest and most actively-used indigenous languages of North America.

The exhibit is based on the 2006 book of the same name by author Stephen Hirst and principal photographer Lois Hirst. The Flagstaff couple's book and the exhibit are the outcome of their 40-year relationship with the Havasupai people and the 11 years they lived in their midst as educators.

The exhibit made its debut in the summer of 2007 at the Kolb Studio at the Grand Canyon. It proved so popular, it was eventually picked up by MNA, Tilousi said.

MNA Director Robert Breunig said he is very excited to provide another venue for the exhibit.

Tilousi she will be at the exhibit's opening reception as one of the presenters and will help present gifts of appreciation.

"We will present gifts to folks who have put a lot of effort into it," she said.

The Hirsts will be at the reception to talk about their experiences with the Havasupai and the recent flooding of the village of Supai.

Tilousi said she lived in Supai for four years before moving to Carefree when the floods made her home at the village uninhabitable.

"We are very pleased that the exhibit is going to document the story of Havasupai and the culture and we are eager to promote some of the things that are happening in our village to people around the world," Tilousi said. "We are the Grand Canyon, even though it has been a rough time for us in terms of the floods and the economy, we will make it through this.. We've been here for years, through high tides and low tides."

At the reception, Terry and Lyntha Eiler will also present photos and share stories about the years they lived with the Havasupai.

They lived and worked in the Southwest for many years, documenting the lives of Native peoples for such prestigious publications as National Geographic.

The Grand Canyon Association and the Museum of Northern Arizona are co-sponsors of the exhibit reception, with Grand Canyon National Park and the Flagstaff Photography Center.

WHEN: Free opening reception today, from 2 to 4 p.m., in the Branigar/Chase Discover Center. The exhibit will be up through April 26. Museum hours: Daily, 9 a.m. to 5 p.m.

INFO: For more information, call the museum at 774-5213, or visit the Web site at www.musnaz.org.

The ‘Halo: Infinite’ we want is here!

The ‘Halo: Infinite’ we want is here!

Review: Football tale '12 Mighty Orphans' tackled by its own cliches

There's not a cliche that's not kicked through the goalposts in "12 Mighty Orphans," a sports drama that is so by-the-book that it can be reci…

Toward the end of “The Hitman’s Wife’s Bodyguard,” there’s a scene where Ryan Reynolds is repeatedly smashing a man’s head into a jukebox aboa…

Ned Beatty, the indelible character actor whose first film role in 1972's "Deliverance" launched him on a long career, has died. He was 83.

We’ve had to say goodbye to some beloved musicians, athletes, actors and more. Here's a look at the stars we've lost so far in 2021, through May.

Johnson admitted he isn't sure if he has "the patience" for the role, but he was flattered to discover that 46 percent of Americans would back him for the White House.

'Housebroken' brings out the animal in pet owners, stars say

If Clea DuVall had been able to take her cat to therapy, she may not have written “Housebroken,” a new animated series on Fox.

Frank Bonner of 'WKRP in Cincinnati' dies at 79

Frank Bonner, who played a brash salesman with an affection for polyester plaid suits on the TV comedy "WKRP in Cincinnati," has died. He was 79.

Q&A: Rita Moreno on finding self-worth and never giving up

Rita Moreno was forthright in an interview with the AP while occasionally reaching for a tissue for springtime allergies. "All that cocaine," the 89-year-old joked.

Anthony Bourdain doc 'an act of therapy' for an acute loss

NEW YORK (AP) — When the filmmaker Morgan Neville began making a documentary on Anthony Bourdain, the late chef and globe-trotting television host, one of the first things he did was comb through every song Bourdain had ever referenced. He came up with a playlist 18½ hours long and called it “Tony.”

Now that Lil Dicky has a bigger slice of success his neuroses are off the chart.