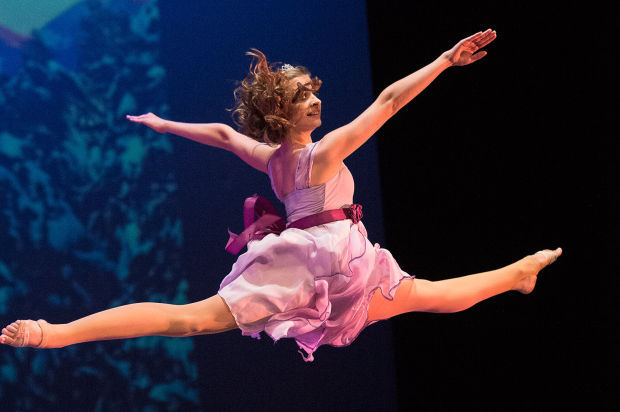 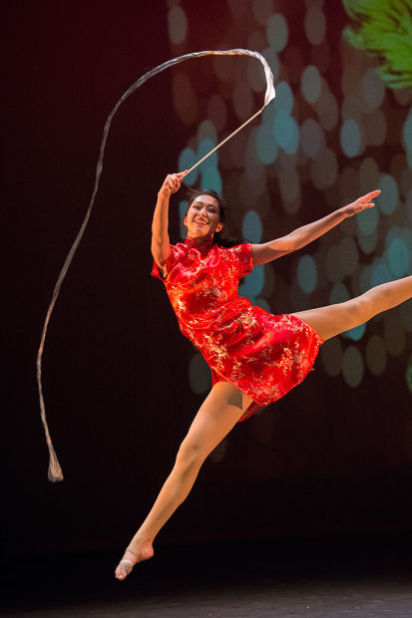 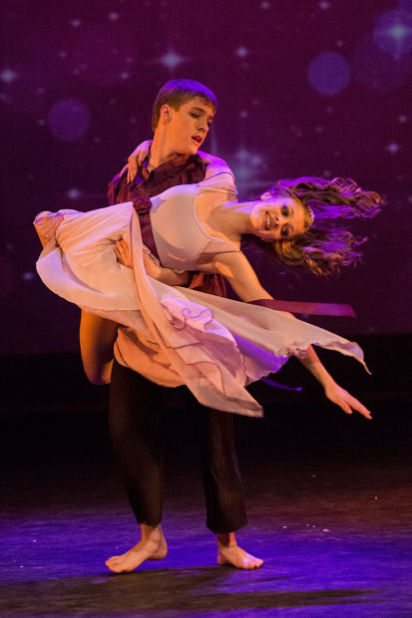 Canyon Movement Company’s Karli Haviland has been dancing nearly her entire life, and until this point the classes, recitals and bruised bones have all been for one role.

“Sugar Plum Fairy is a dream come true for me,” she said. With her mother’s support, the 21 year old has been able to land the lead role. “One of the strongest unifiers we have is dance. She’s always supported me in dance and always put it first; always put doctors’ appointments because of injuries first. It’s always been her priority. It’s really awesome that both of our hard work has paid off.”

The company maintains a strong focus on family, community and collaboration with their edgy spin on the classic, “The Nutcracker Suite in Modern Bare Feet.” Now entering its 11th year, the 50-dancer spectacle takes place at a new location with nearly a complete overhaul of stunning choreography, backdrop and lighting designs coupled with death-defying aerial stunts.

After performing for several hundred school students from across northern Arizona and the Hopi reservation, the big shows will take place at Coconino High School’s Auditorium, 2801 N. Izabel St., Friday and Saturday at 7:30 p.m. A special matinee performance is Saturday at 11 a.m. Tickets are available at the door. The cost is $16 for adults and $12 for students. To learn more, call 774-3937 or visit www.canyonmovementcompany.org.

CMC Executive Director Gina Darlington and a fellow dancer in the company were sitting on a beach in Italy in 2004. Her colleague was eager to produce a version of the classic “Nutcracker.” Darlington, though, needed a little more convincing.

While the original ballet is a fantasy, she insisted the coming-of-age story maintain authenticity.

CMC’s “Nutcracker” weaves the threads of movement into two acts: a dream and a party. In the story, young Clara receives a toy nutcracker from her father, Drosselmyer, but her jealous little brother Fritz slams the toy on the ground, breaking it.

“Clara travels in her dream to the most beautiful place in the world, which would be right here in Flagstaff,” Darlington said, and to connect the world tour in music and dance, she thought of the Grand Canyon, which receives millions of visitors a year from all over the world.

The world tour in music and dance incorporates an Arabian Dance performed by Flagstaff’s Al Rakasaat, a Chinese ribbon dance, Spanish flamenco and a Russian dance adapted by the original choreography of a Ukrainian folk dancer, and former Flagstaffian, for authenticity.

The show’s new director, Cori Wall, helped redesign nearly all the choreography and uses costume colors to help audiences connect the dots between the two acts.

Alyssa McGuire dances the parts of Clara, snowflakes and flowers in this year’s production. She appreciates the continuity in the new choreography that helps create a dreamlike feel.

Wall, who is also an instructor at CanyonDanceAcademy, planned that on purpose. Over the last 10 weeks of preparation, her students were excited to practice the same moves in class as they did in rehearsals.

Having the choreography change keeps the long-running production interesting for both the teenage dancers and audiences alike. This year’s Streets of Paris dance features the young Gemma Giovale of Flag Aerial Arts performing incredible acrobatic feats.

“It’s beautiful,” Wall gushed. “I saw her practice last weekend, and she climbs all the way to the top of the ceiling in the theatre and then does these death rolls. It’s super cool.”

Although only 15, McGuire has been dancing in this show for years and has seen — and lived — its evolution.

“I remember watching it being really young and they used to be like French school girls and by the time I got up to playing that it was street hip-hop kind of thing, and now it’s street hip-hop and aerial and circus with hula hoops and stilts,” she said.

The constant changes in choreography, plus watching their friends move through the roles, inspire dancers to practice harder.

Like Haviland, her husband Nathaniel has also worked his way up from the ethnic dances to the Nutcracker’s understudy. This year he is dancing as the Cavalier and performs a duet dance with his wife as the Sugar Plum Fairy.

“It’s really, really fun to get to dance with him,” Karli said. “It’s always fun to watch him dance, but I have to say I definitely like being the one he’s dancing with more.”

CMC’s “Nutcracker” has made a point to include family over the years, even if the parent-dancers aren’t classically trained.

McGuire will finally have the chance to catch a glimpse of her father’s performance skills when he plays her on-stage father, Drosselmyer. For her, she grew up listening to stories of how he captivated audiences, but never got to experience it.

“It’s just a really sweet moment with my dad to just have him give me the Nutcracker in the scene and start the dream and then end the show with him,” she said.

With a laugh, she added, “My mom’s gonna cry and I’m gonna cry. It’s gonna be great.”

If you go nutcracker

Here's a look at a few beloved musicians, athletes, actors and other stars we've said goodbye to so far in 2020.

Lynn Cohen, who played Magda in 'Sex and the City,' dies

NEW YORK (AP) — Lynn Cohen, an actress best known for playing the plainspoken housekeeper and nanny Magda in “Sex and the City,” has died. She was 86.

A new installment in the “Shaun the Sheep” saga from Aardman Animations is always a balm for the soul. The dialogue-free films about the adven…

‘Sonic the Hedgehog’ is a surprisingly good time

I’m as surprised as anyone to report that “Sonic the Hedgehog,” the adaptation of the popular ’90s Sega video game, is actually good. Expectat…