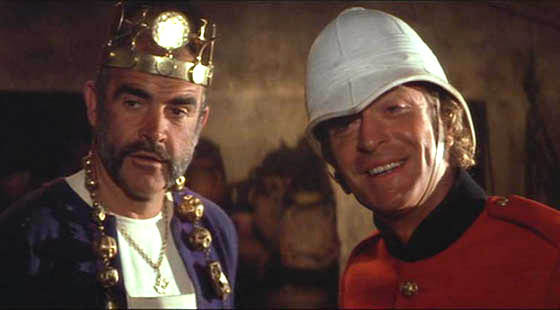 Sean Connery and Michael Caine in a scene from "The Man Who Would Be King," this week's offering in the NAU Film Series. 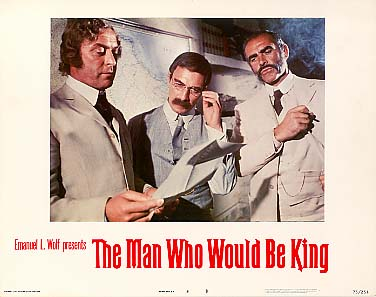 Great storytellers leave us with vivid images and captivating memories. Crane, Twain, and later Steinbeck wove a fabric of great odysseys. And so did Rudyard Kipling. “The Man Who Would Be King” is based on an 1888 Kipling story, with Kipling himself as one of the primary characters (as a reporter for the Northern Star newspaper).

Set in British India in the 19th century, two former British soldiers seek fortune with a plan to unseat a feudal lord and assume the crown of Kafiristan. Sean Connery (Danny) and Michael Caine (Peachy) are the two soldiers of fortune. Christopher Plummer plays the ever-polite Rudyard Kipling.

Directed by John Huston, who had tried to make this film since the 1950s, the film takes us to the British colony of India where Peachy, a Freemason, hustles and pickpockets his way for survival. He picks Kipling’s pocket and steals his watch only to be shocked that he has stolen from another Freemason. As a loyal Freemason, Kipling agrees to help Peachy connect with his best friend Danny. Ultimately, in a most curious twist that is also due to Masonic ties, Danny is misperceived to be a “god,” and the promised successor to Alexander the Great.

Saeed Jaffrey, performs a superb supporting role as Billy Fish, a former British Gurkha rifleman who befriends the pair and becomes their loyal friend to the death. Shakira Caine (Michael’s real-life wife) plays Roxanne (who has same name as the wife of Alexander the Great), whom Connery has chosen to become his queen.

Filmed in Morocco, the color is vivid and its imagery takes you to what is now part of Afghanistan. Set in the time when the sun never set on the British Empire, Kipling captures the tribal society that existed then and, as we have recently learned, still exists. All of this is set as the backdrop to a story that proves that power corrupts, and absolute power corrupts absolutely.

The chemistry between Connery and Caine is fantastic. It rivals the chemistry of other great film pairings like DeNiro-Pacino, Hope-Crosby, Douglas-Lancaster and Sarandon-Costner. Their dialogue and interaction is so palatable, their chemistry is certainly distilled from many a fraternal Glenlivet libation. You will even see a reference to Glenlivet in the film!

Unfortunately, “The Man Who Would Be King” was up against stiff competition for an Academy Award. It was nominated for an Oscar for Best Art Direction, Best Writing, Best Costume Design, and Best Editing categories, but unfortunately came up empty. “One Flew Over The Cuckoo’s Nest” won Best Picture, Jack Nicholson and Louise Fletcher won Best Actor and Actress. “Barry Lyndon” took the Oscar for Best Costume Design, and “Jaws” won for Best Film Editing. In a year of bounty, Connery was also the lead in another Oscar-nominated film, “The Wind and The Lion.”

Not all masterpieces win the Oscar, but “The Man Who Would Be King,” will captivate your imagination and will provide a respite from the vagaries of today.

“The Man Who Would Be King"

The new Mark Wahlberg-starring drama “Joe Bell,” directed by Reinaldo Marcus Green, is based on a true story that took place in 2013, when a l…

Henry Golding has undeniable screen presence. He’s handsome, sure. Lots of actors are. But Golding also has that effortless charisma that the …

Review: 'Space Jam' has manic fun but is no slam dunk

“Space Jam: A New Legacy” is nearly impossible to parse, at least in a traditional review.

Movie Review: Nicolas Cage revisits what he left behind in 'Pig'

Nicolas Cage is like a box of chocolates: you never know what you're gonna get.

There are many startling moments in “Roadrunner,” Morgan Neville’s rich and moving documentary about the singular culinary storyteller Anthony…

“Can you believe I found this online?” a delighted Prisca asks husband Guy at the beginning of “Old,” as their family arrives at a glistening …

The dystopian action-horror “Purge” franchise has previously made stops in New York City, Los Angeles and Washington, DC. Now it's time to pul…

Sean Connery and Michael Caine in a scene from "The Man Who Would Be King," this week's offering in the NAU Film Series.