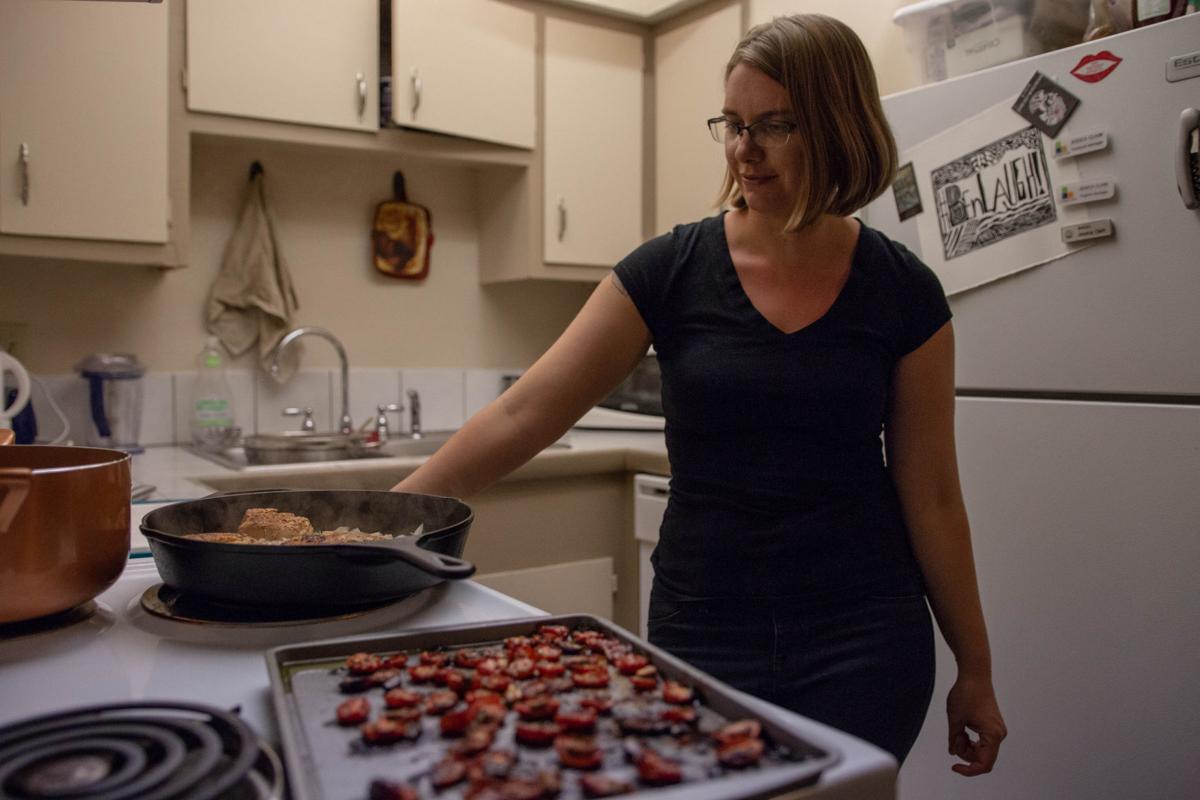 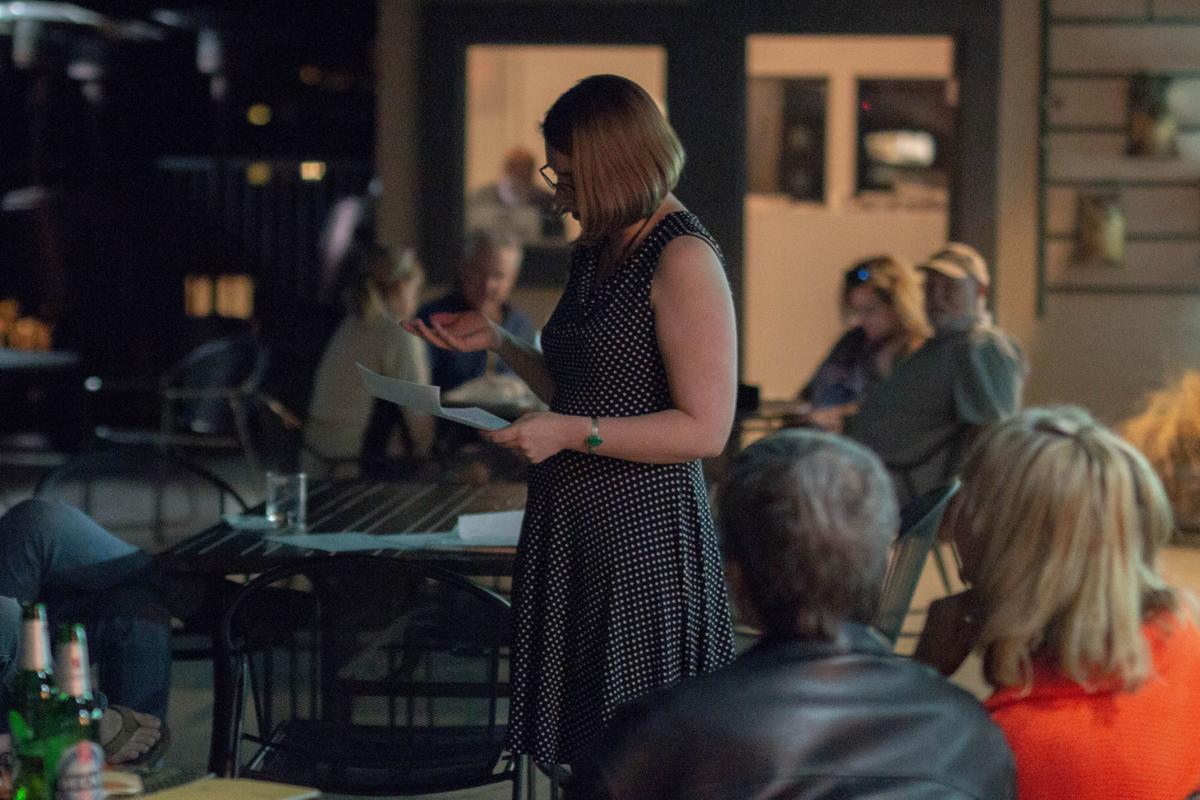 Clark reads selections from "Recipes for Love and Disaster" at Juniper House Readings at Root Public House on June 12. 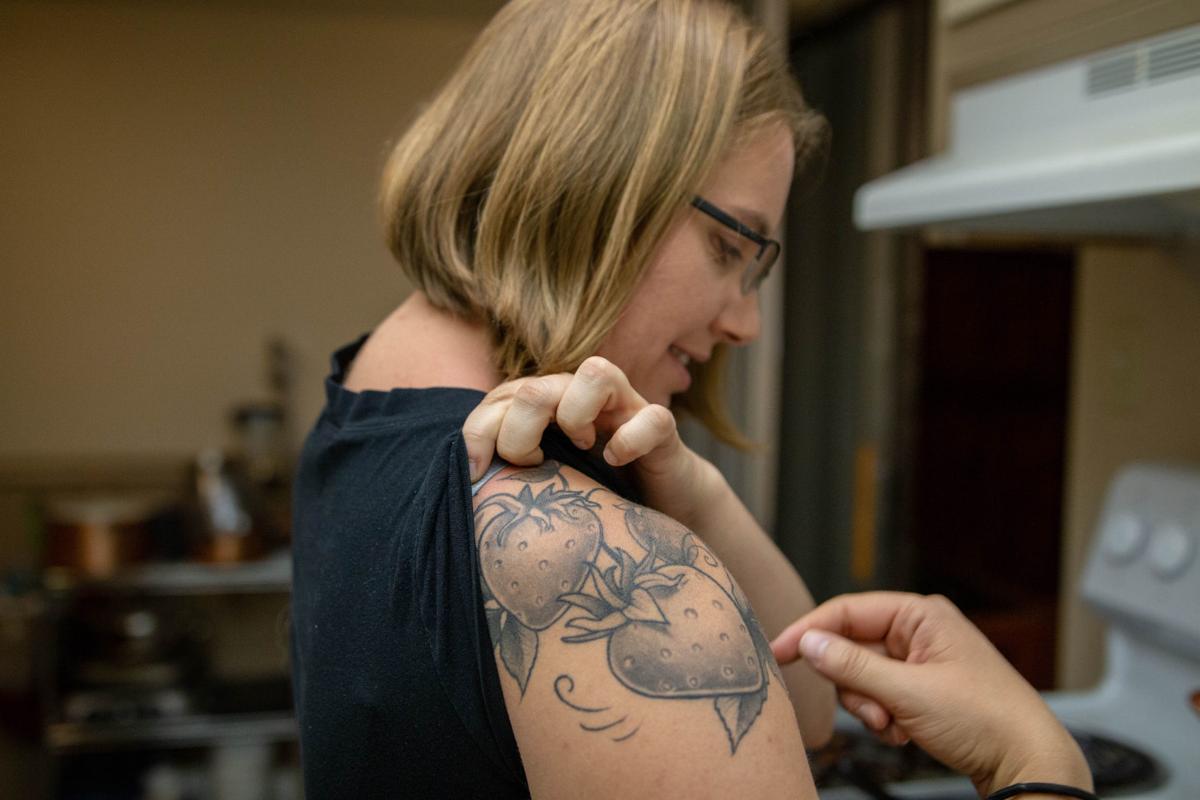 Clark's tattoo of a strawberry vine was inspired by Paisley Rekdal poem "Strawberry."

Clark reads selections from "Recipes for Love and Disaster" at Juniper House Readings at Root Public House on June 12.

Clark's tattoo of a strawberry vine was inspired by Paisley Rekdal poem "Strawberry."

Food and poetry are almost the same thing. At least that’s how Northern Arizona University alumnus Jessica Clark feels. Both are meant to be consumed and shared. They can build community, share an experience, tell a story and express love.

Being a writer and poet, Clark looks for disparities between ideas. And food and poetry, at first glance, seem unnatural to compare. As the idea to write a collection of poetry about food simmered, she began to realize the similarities were far more apparent.

“Very recently I started to think about how cooking is love. You’re making this thing for the people around you to share with them, they’re going to eat it, they’re going to be nourished by it. It’s emotional in some way, giving something to someone in that context,” said Clark. “A lot of what I do with writing is try to figure out how to talk about this complex emotion or experience or moment in a way that other people can relate. So food has actually turned out to be a really natural thing to talk about in terms of giving love and sharing yourself.”

Clark’s new chapbook “Recipes for Love and Disaster,” a collection of recipe-style and food-related poems, touches on what food can teach us about culture, relationships and humanity.

In the years since returning to Flagstaff from South Korea, where she taught English in Busan, Clark has found inspiration in the metaphor of cooking. A breakup had left her in a place without a kitchen, showing Clark how much she truly enjoyed the art of cooking. During April’s 30/30 challenge, in which writers are prompted to create a poem a day throughout the month, Clark wrote “Begin with Onion,” a poem on what it means to construct after first deconstructing. She said she liked the idea of themed chapbooks, particularly being inspired by a friend’s chapbook which featured darkly comedic poems.

“It was something that I started writing and I thought was fun and interesting and all over this place,” said Clark. “I think some of my chapbook came from things I’ve read and people I was associated with who had a grandmother’s recipe that they were sharing with friends. I just started to become a lot more acquainted with this idea in general of food being something people come together over.”

“Begin with Onion” opens the chapbook, and in it, Clark writes, “Onion pieces should cascade away from their source, collapsing and dispersing as snow in an avalanche./ It’s okay to cry at this point—/ It’s natural to feel that familiar stinging in your eyes as you watch something that was whole fall apart as you make something that was whole fall apart/ Be careful with your tears, though—do not let them obscure your vision. You still have a lot to do./ When you reach the final intact strip, show no mercy./ Destruction has become your trademark. See it through its conclusion.”

Other poems connect to a tradition of women cooking with their hands, equate learning how to love in a new relationship to learning how to eat and cook with fresh vegetables, and "Sizzle" compares maintaining the right amount of heat when cooking to sex and foreplay.

In the poem “Tyranny of Small Decision Soup,” Clark talks about making do with mistakes and turning them into something new. Using soup as the metaphor, she writes, “This is what you're eating:/ a tyranny of your own small decisions,/ an amalgamation of a week's miscalculations/ all pretty in a pot/ dressed up like intention/ like a soup of your own invention./ You just have to roll with the leftovers sometimes,/ make the best of what's left to you sometimes.”

Clark mirrors the complexities of cooking—the cutting, the grinding, the delicacy, the finesse, the work, the effort, the satisfaction, the disappointment—with connecting. Being a friend or a lover requires the same dedication to understanding when a moment requires a gentle glaze or blistering heat.

Cooking can be as simple as satisfying hunger, eating because you need to or because it is the only option, but Clark is more interested in how it connects you from me and them from us, much like art.

“For me, art is about trying to connect with other people and other experiences and allow them to connect with you. So in creating a chapbook that’s about food, it’s really just giving people some things I’ve experienced and maybe people relate to them.”

Having grown up and spending most of her life in Flagstaff, Clark says this is her home, and the chapbook is almost like a gift to the friends and people who have helped her become an established writer.

“Recipes for Love and Disaster,” like all of Clark’s work, like cooking for a friend, is meant to be shared, to allow that distance between others to close in and become a little bit smaller, to build a connection.

“If I didn’t care about this impacting or being communicative with other people in some way, I would never have to write a poem. I would just write shit down in my journal for me, and it wouldn’t be very artful or very refined. I wouldn’t go back and edit it to make it sound better. It would just be whatever came out,” said Clark. “In my opinion, it wouldn’t be art.”

“Recipes for Love and Disaster” is self-published and will be available by August. To learn more about Jessica Clark and her new chapbook, find her at the Root Public House rooftop during the Juniper House Readings on any given Tuesday from 7-10 p.m.