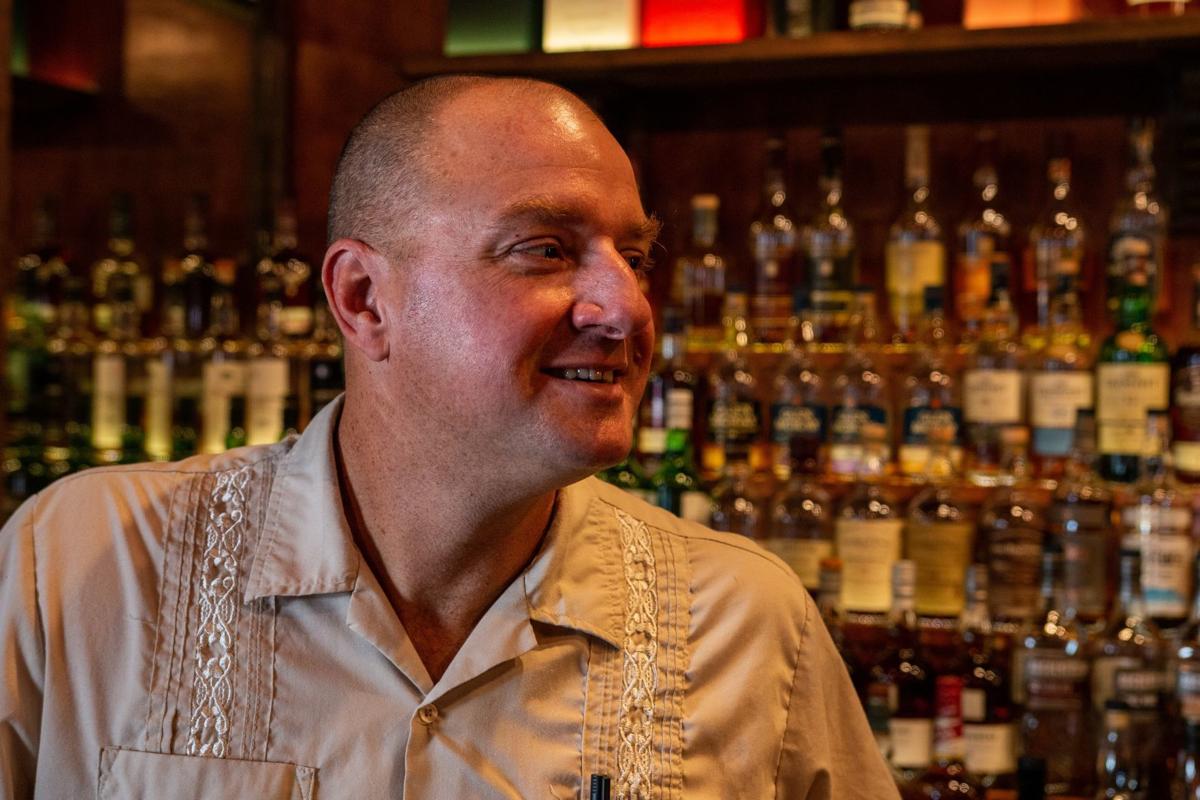 James Jay, 48, is a poet and owner of Flagstaff's Uptown Pubhouse. His new poetry collection, "Barman," looks at literature and life as lost-and-found objects.

James Jay, 48, is a poet and owner of Flagstaff's Uptown Pubhouse. His new poetry collection, "Barman," looks at literature and life as lost-and-found objects.

If you’ve ever lost something at Uptown Pubhouse, chances are James Jay has found it. Hoodies, notebooks, cell phones, wallets. With more than two decades in the bar business, he's found it all. Also a poet since his young adult years, Jay never married his two professions — until now.

“For a long time I fought to keep them separate,” Jay said. “I don’t particularly know why. I just felt like I should, but they’ve always been together. I suppose they were always there, I just tried to ignore it.”

Published by Gorsky Press, Jay’s third poetry collection “Barman” looks at life from behind a copper-coated bar. In 100 nimble pages, Jay captures the pain, joy, heartache, love, despair and beauty in moments as honest as a drink or two might make you.

The lost and found box. Every bar has one, and Jay said most bars — good ones anyway — will always make a decent attempt to get these lost items back in the hands of their owner. Unfortunately, that’s not always the case.

“It’s just a shame. I don’t know if that’s someone’s favorite scarf or if that’s just any scarf, you know. So to me, it’s a little bit sad,” Jay said. “Then I was thinking, ‘Well, what else is a lost and found?’ Some of the conversations and the people, their stories become lost and found objects in some ways. Once I got to that idea then I was off and running. The collection almost wrote itself after that.”

The idea that something is lost and found, or even lost forever, threads its way throughout the collection in literal representations, as in a wallet with $200 in “The Barman’s Box” or missing dog posters in “The Lost, The Found.”

Lost are not just the things we can touch and feel, but moments and memory, conversations that remain ever floating above empty pint glasses. The moments (a conversation with a man who almost lost his daughter before she was born, Jay imagining his grandchildren as he shaves his head in the morning) shape “Barman” into something gentle and human, despite the grief and tragedy we may face throughout life.

At 21, during his MA program at Northern Arizona University, Jay started working as a bouncer and bartender at Uptown Pubhouse, before it was on the north side of downtown — the name still doesn’t make sense to him, he said with a laugh. While completing his MFA at the University of Montana, Jay also worked at a local bar, “mostly to pay the bills,” but he moved back to Flag shortly after that, where he became a bar manager of Uptown at its current location on Leroux Street.

He remembers the ‘90s, when Beat poetry and poets like Charles Bukowski held a tight grasp on the creative scene. Everyone was writing like Bukowski, Jay said, which is why he kept poetry and bartending separate.

In “Barman,” Jay consciously avoids what he called the “pitfall” of the “heroic drunk,” choosing to sidestep the Bukowski-esque alcohol-fueled eulogy, and instead write earnestly about the people he meets and serves.

“I wouldn’t tell stories about, ‘this person got drunk and made a mess of themselves,’ type of thing. There’s nothing really interesting to write about with those kinds of stories,” he said. “Usually the stuff I find more interesting is when you get a window into someone’s day-to-day type of struggles and fights that people have that they do with such class and dignity. It’s just so incredibly impressive.

“You know, you see someone walking down the street, and they could have just buried their father or something,” he continued, “but they’re still doing their routine, they’re doing their thing and plugging along exceptionally well. Sometimes I just hear little bits of the ways people cope with difficulty, and they’re doing it with grace. To me that’s what’s most poetically interesting.”

Naturally, the stories that speak to Jay are deeply personal, emotional and complex, often spoken with an air of bartender-patron confidentiality.

“Barman” also acts almost as an ode to writers of the past who have inspired Jay, poets like Pablo Neruda, William Stratford and Vladimir Mayakovsky, who shot and killed himself at age 36. In “Shaving My Head Before the Sun Rise,” Jay emphasizes the fact that he’s lived longer than Mayakovsky as he imagines his future grandchildren and the sounds they might hear. As Jay ages, now 48, outliving his favorite writers, it adds a different perspective, he said.

“Mayakovsky always considered himself a futurist. He was always writing with that notion of generations to come,” Jay said. “I think, if you’re going to write something down, whatever the form might be, you are thinking about future generations, right? Preserving a voice. To some extent, we’re holding something, shaping it, we’re trying to make it last. We’re thinking about people that have not yet showed up and may never show up.”

Literature, even Jay’s own, can be found and explored and admired, and, just as quickly, it’s suddenly lost, “and then back to the ether,” he said. “In some ways it’s sad, but I think as I’ve gotten old, it just seems beautiful. It just seems the way it should be. If everything was found all the time there’d be no room for the next generation of voices.”

This sentiment is most beautifully realized in the poems about his children, Wilson and Henry, to whom the collection is dedicated.

Tender and quiet, “Barman” speaks to the author’s and our own relevancy, served with humor and humanity — the way only a good bartender can.

“Barman” is available through Gorsky Press and at local bookstores.

Sunday, Aug. 11, James Jay will host a book reading and signing at Uptown Pubhouse, 114 N Leroux St, with local author Stacy Murison. The event is free and begins at noon.