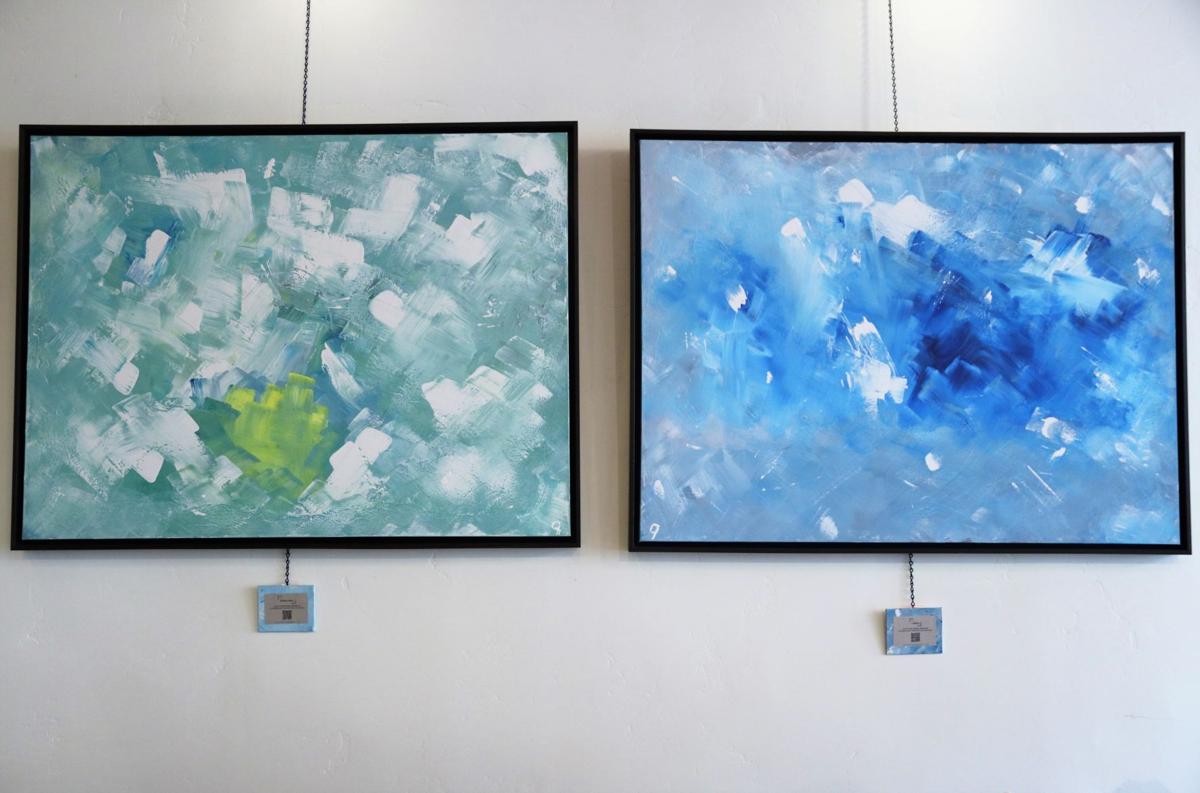 Mark Jamnik's pieces that make up Subliminal Art Story begin with words of inspiration written on the canvas before the artist covers them with paint. 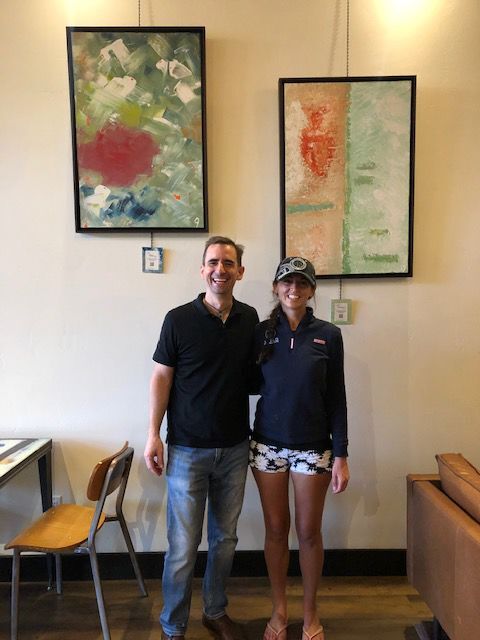 Artist Mark Jamnik and article author Jacklyn Walling stand inside Late for the Train where Jamnik has art on display through the end of November.

JACKLYN WALLING Special to the Sun

On a recent crisp fall day, Tempe-based artist Mark Jamnik thumbed through his shrink-wrapped canvases inside Late for the Train. The canvases leaned against tables in the chic coffee shop, the abstract designs making up his first art installation.

Within minutes, a rickety yellow ladder was summoned to hang the artwork in a four-person process, the artist on the ladder and his three good friends advising on placement and providing friendly encouragement.

“Where’s the vodka for the coffee?”

“I was pretty good at drafting in high school, it’s not level.”

As each canvas was hung, the stripped packaging revealed Jamnik’s signature work, Subliminal Story Art. At first glance, it’s shades of blues merged with green, brushstrokes brightening to orange and then pops of red that draw the eye, but the paintings go deeper than the colors. What’s not seen are the written words of inspiration scrawled beneath the paints that manifest this outer beauty.

DIVING INTO THE SUBLIMINAL

Subliminal Story Art serves as a metaphor for Jamnik’s life. “Subliminal” relates to his time working in advertising sales, “Story” represents a method from his current coaching business and “Art” is just that—the art he creates.

He says this idea has been done before by other artists, but he’s given it a specific label to represent him, his life experiences and what he hopes to share through his work.

“I wanted to call it Subliminal Story Art because I spent over 15 years in the advertising world. We’ve all heard the negative sides of subliminal messages so I wanted to create a positive side to it. To say, ‘Here’s what’s actually underneath the painting in a way that actually inspires the painting and also has a story to tell.’”

Before he reaches for a paint brush, Jamnik writes his inspiration on the blank canvas. His goal is to capture that inspiration, meaning and connection and then express those relationships in colors to create beauty with an underlying depth.

“I really believe in life, there’s so much more. We see the superficial of people. We see the clothes they wear, how they present themselves, the smile on their face. We have this persona we put out there and yet there’s so much more underneath it all,” Jamnik said. “I wanted to take that and encapsulate the deeper meaning of life inside the paintings.”

He’s inspired by simplicity and the way nature effortlessly blends death and life, creating what Jamnik believes to be the true definition of perfection—imperfection.

Jamnik’s mom introduced him to art classes as a kid. As he grew up, he set aside his talents to pursue advertising sales. He enjoyed his successes and connecting with people, but decided it was time for something new when his managers began placing material values over client relationships.

That’s when psychology and coaching—whether he was being coached or coaching someone else—became a passion for him. He qualified to serve as one of 100 active Tony Robinson coaches, a program designed to pass on strategies for life and business as outlined by entrepreneur, New York Times best-selling author and philanthropist Tony Robinson.

Now Jamnik runs his own business, Enjoy Life Daily, and works as a Time Creation Strategist where he meets with clients to help improve time management skills and productivity in their personal and professional lives.

It was this shift that brought art back to Jamnik’s life. During a coaching session of his own, he was encouraged to write down miracles he experienced. He recorded moments on a canvas, and without knowing it, started the beginning of “The Miracle Board,” one of his pieces made prior to the work on display at Late for the Train.

To him, miracles are about the little moments in life, not the big things or societal norms pushed on everyone. His miracles include things like his friends helping him hang his paintings for opening night—one drove more than 1,200 miles to surprise him, another came from Las Vegas and the third happened to be in Flagstaff the same day.

“It’s finding those little moments surrounding us everywhere,” Jamnik said. “When we start looking for them, we slow down enough to actually recognize the present moment.”

THE ART OF 'SUBLIMINAL STORY ART'

Because Jamnik’s inspiration comes from a variety of places, he views his art as a platform to address difficult topics to bring light to some of the emotions humans experience. He openly discusses his battles with OCD and perfectionist tendencies, sharing how it used to take 15 minutes to set his alarm clock every night in college. If he didn’t, he feared he’d oversleep and miss class.

“I feel like Subliminal Story Art is actually helping to bring tangibility to what is an intangible emotion,” he said. “Because I’ve done so much work in psychology and emotions, I feel like that’s expressing itself through art and I’m actually able to give words to it in my own way.”

He says he can speak about his struggles with OCD and perfectionism because he’s lived through them. Now, he wants to make sure other people have the opportunity to speak out and know they are not alone.

“I remember one of the first strokes, I had no idea what I was going to paint,” Jamnik said. “I just remember thinking, ‘Oh my gosh, I’m breathing,’ when I took the first stroke because I don’t know what it’s going to do, what this is going to look like. I thought, ‘I know that wasn’t a straight line and I have no idea where it’s going, but I’m going to let whatever is supposed to come out, come out.’”

The painting part is freeing for him, but he has a specific process to his work. He takes notes of what inspires him, doodles on the canvas and then snaps a photo of it so people can see what’s underneath the colors upon exhibition. Then he turns on his Sirius XM Radio to Watercolors, channel 66, and lets the jazz music guide him.

“There’s times I’ll just be immersed inside of the paint and other times where the music will inspire me and I’ll just start dancing a little bit with the painting.”

TYING IT ALL TOGETHER

In the middle of summer, Jamnik drove up to Flagstaff to escape the heat of Tempe and the confines of the COVID-19 quarantine. He recalls his mini moment of panic back in March when he spent $500 on groceries and then reframed his thinking. He splurged on canvases too.

“I said, ‘I am not treating this as a quarantine, I’m treating this as a chrysalis and after six weeks I’m going to emerge completely different than when I went into this,’” he explained. “I completely allowed myself to paint and allowed myself to reenergize and reevaluate what I was doing. I took that time, I got quiet and I got skilled and really dug into what it was I was looking to do.”

When he made that first trip to Flagstaff, he arrived just as a group of ladies were leaving a yoga class. After asking them about parking, they invited him for coffee where they could all social distance on the back patio of Late for the Train.

Jamnik had a great time and decided to come up the following weekend. This time, because of rain, he sat inside where he noticed all the artwork on the walls and wondered about showing his own. Coming from a background of sales, he said he was used to be told no so why not ask?

The barista at the counter directed him to general manager Aysia Raines and after viewing his work, they began discussing the logistics of getting his work into the coffee shop and creating more pieces specific to Flagstaff and Late for the Train.

“I love the idea of actually creating pieces,” Jamnik said. “When I have other opportunities, I’d like to do the same type of thing where I’m getting information about what they want to express or what’s powerful for them and creating something for their space.

“My art is my heart and my heart is guiding me,” he continued. “I love sharing my passion with others and I feel like we’re all here to do and give our gift to the world.”

Mark Jamnik’s “Subliminal Story Art” is on display at Late for the Train, 19 E. Aspen Ave., through Nov. 30. Visit www.markjamnik.com to see more of the artist’s work and www.enjoylifedaily.com for more information about his coaching business.

Performance art doesn’t always have to happen on stages in meticulously lit theaters or on large venue stages. Sometimes, a parking lot will d…

“No town, no city is complete without its art, without its spirit,” artist Shonto Begay said when he was honored at last year’s Viola Awards G…

Open Doors: Art in Action's 'Resilient Matriarchy' exhibit extended through end of May

Mark Jamnik's pieces that make up Subliminal Art Story begin with words of inspiration written on the canvas before the artist covers them with paint.

Artist Mark Jamnik and article author Jacklyn Walling stand inside Late for the Train where Jamnik has art on display through the end of November.