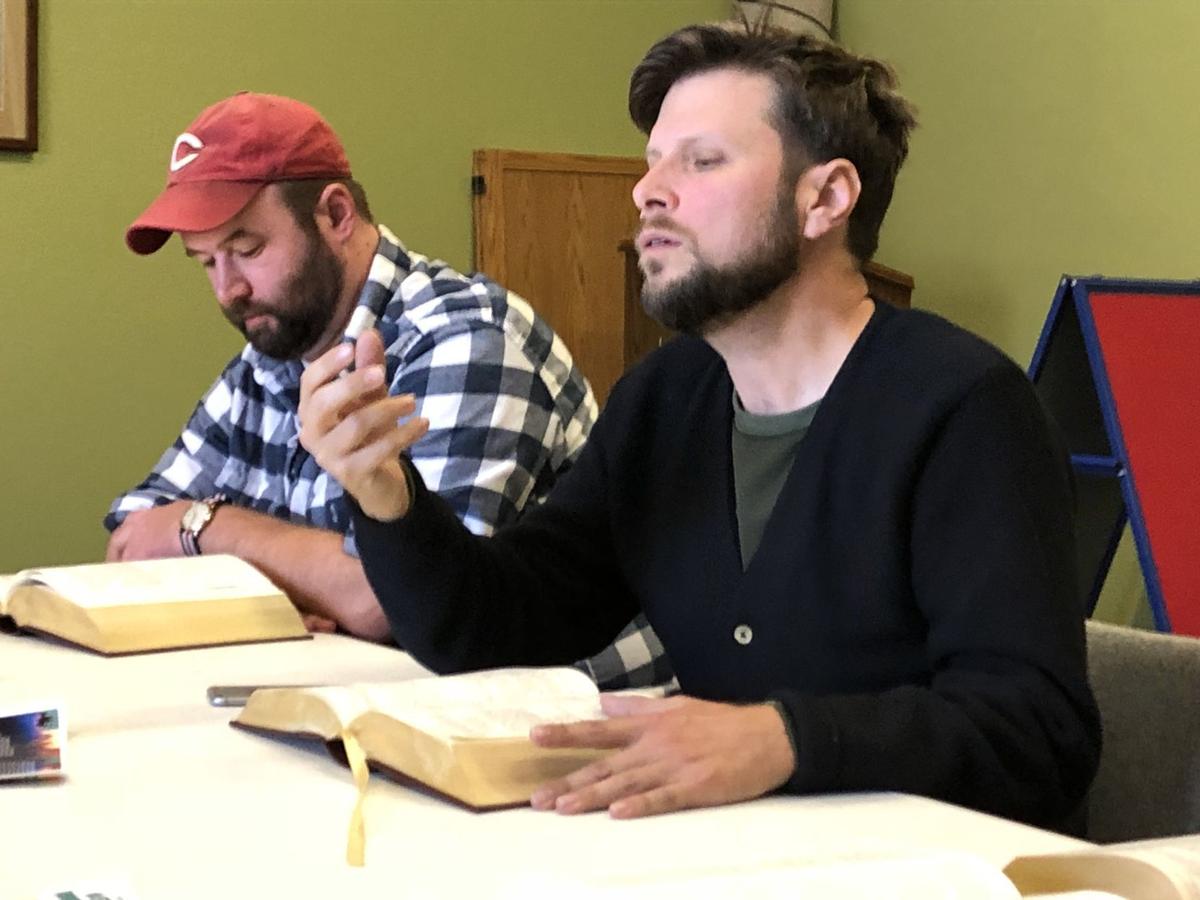 Brad Garner, reading the part of Hamlet in which the title character laments the death of his friend Yorick, mimes lifting up the skull and speaking to it, as in the play. Each month, people get together in the Flagstaff library to do a table reading of a Shakespeare play. For more photos, visit azdailysun.com.

Jamie Paul reads closely along with the scene as the monthly group, Shakespeare Allowed!, performs Hamlet aloud at the Flagstaff library. 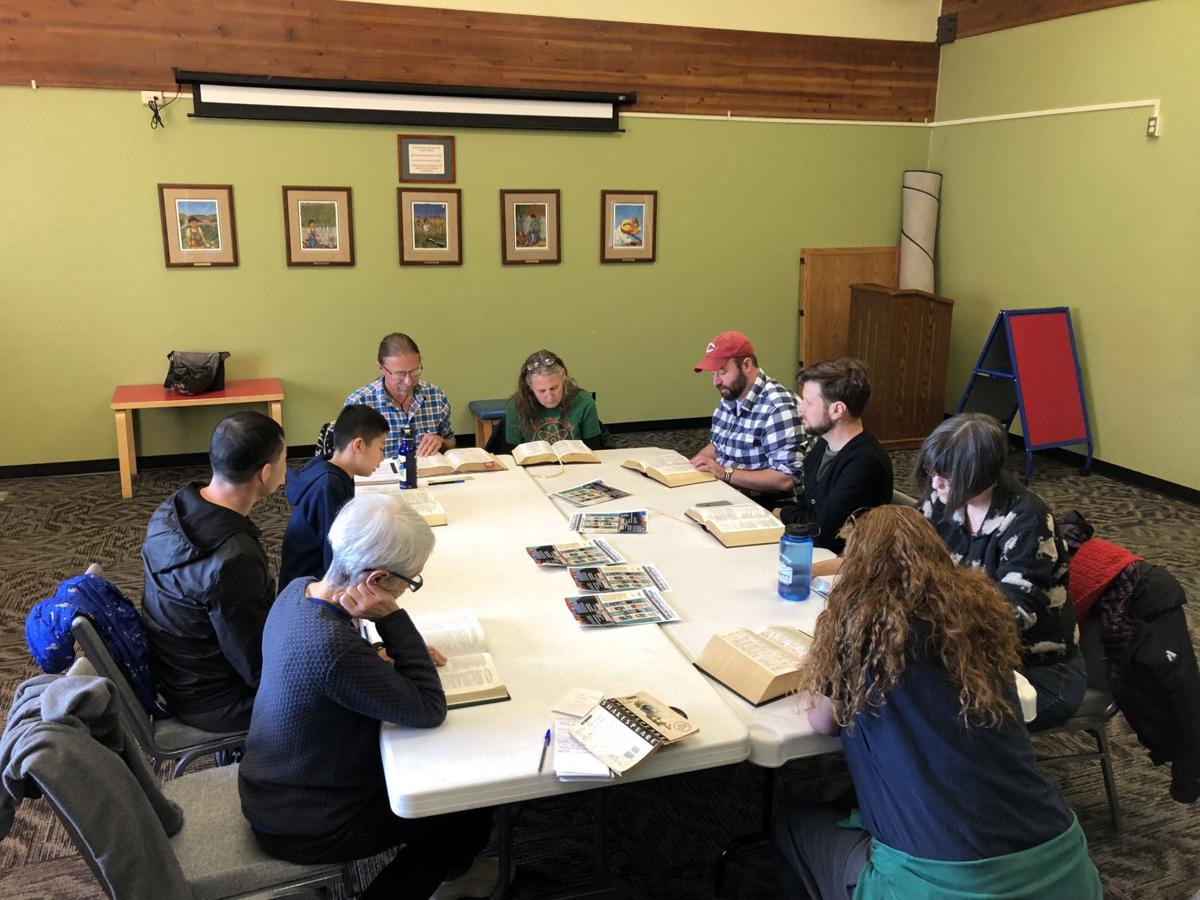 A hearty band of Shakespeare lovers meet monthly at the Flagstaff Library to read The Bard aloud. 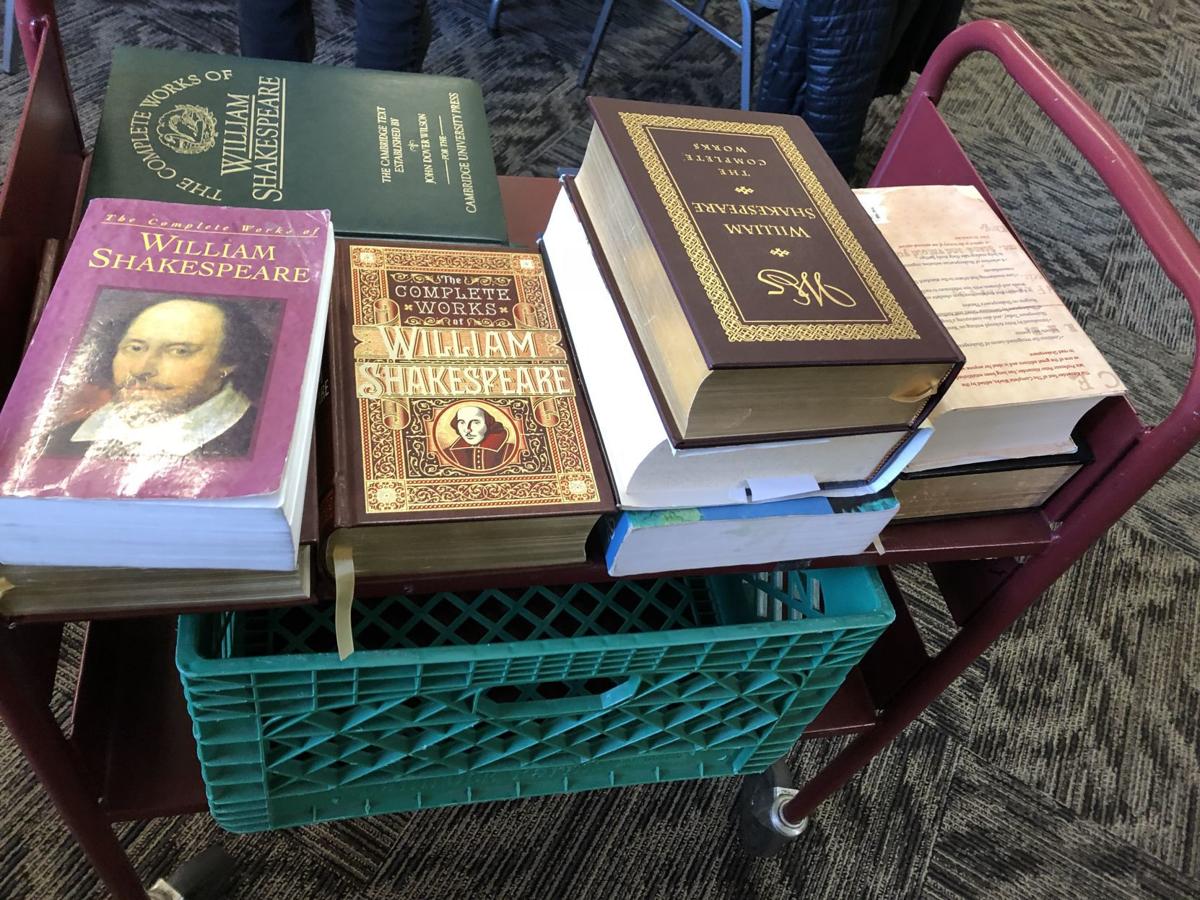 Community members who partake in the monthly Shakespeare Allowed! table readings don't even have to bring their own copies of the plays; the library provides them. 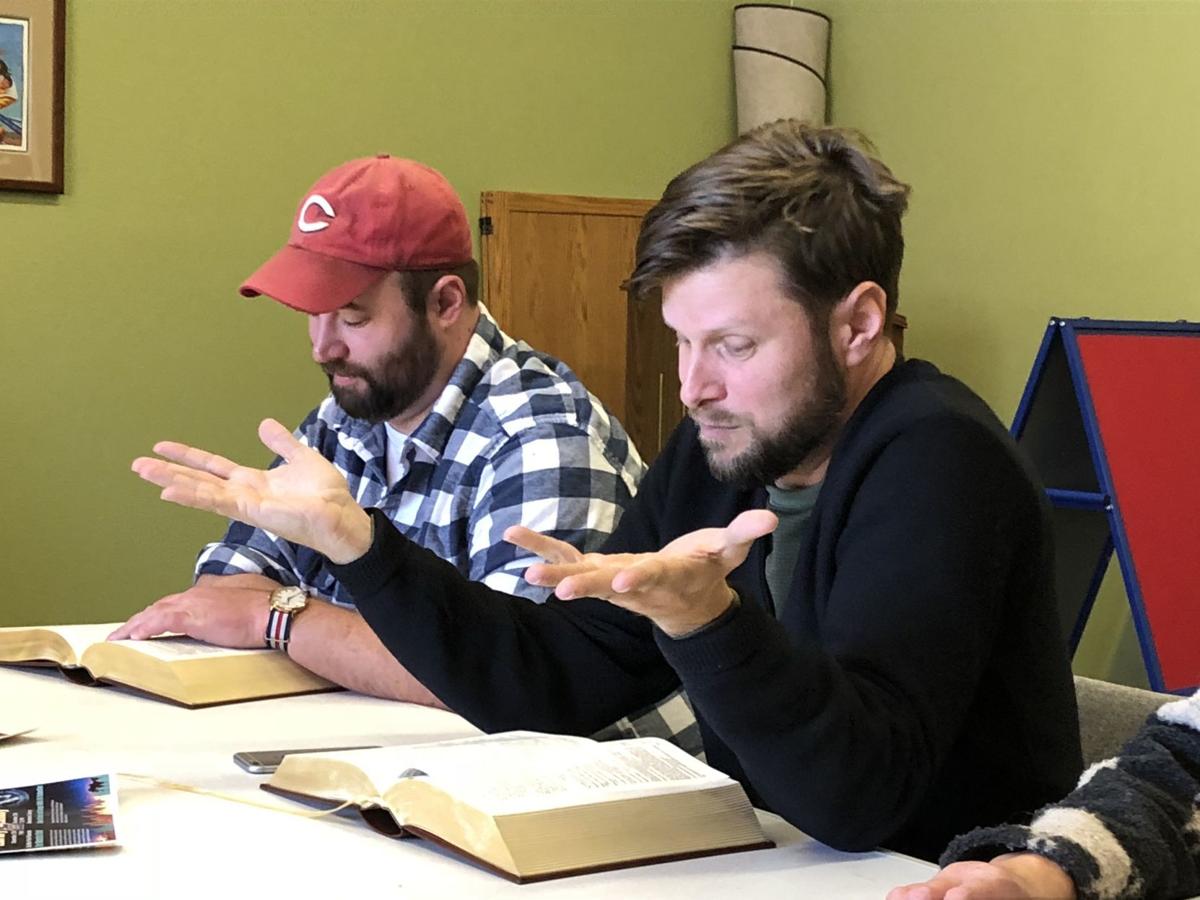 Brad Garner, reading the part of Hamlet in which the title character laments the death of his friend Yorick, mimes lifting up the skull and speaking to it, as in the play. Each month, people get together in the Flagstaff library to do a table reading of a Shakespeare play. For more photos, visit azdailysun.com.

Jamie Paul reads closely along with the scene as the monthly group, Shakespeare Allowed!, performs Hamlet aloud at the Flagstaff library.

A hearty band of Shakespeare lovers meet monthly at the Flagstaff Library to read The Bard aloud.

Community members who partake in the monthly Shakespeare Allowed! table readings don't even have to bring their own copies of the plays; the library provides them.

All around the table, they closed books with a collective thud of finality, a sound as serious as a coffin lid snapping shut. A beat of silence followed, then another, before a spatter of nervous giggles took hold.

“And they’re all dead!” someone proclaimed, giggles seguing into guffaws.

“Well, all except Horatio.”

The monthly meeting of Shakespeare Allowed, a partnership between the Flagstaff Shakespeare Festival and the public library, had just polished off Hamlet, the Bard’s classic revenge tragedy in which nearly everyone gets it in the end — from the vulnerable title character, to scheming Gertrude and Claudius, to poor old Ophelia, to even those comic courtiers, Rosencrantz and Guildenstern.

So why all this levity around a rectangular table in the library’s community room on a lazy Sunday afternoon?

Perhaps it was because these nine people assembled, ranging from age 9 to 60, were heartened by the simple pleasure of reading one of the great works of literature aloud, bringing to life words on a page that, encountered alone, might intimidate, but here lent a communal feeling to the act.

And besides, even when the body count mounts in that climatic Act 5 churchyard scene, Shakespeare can be so slyly funny, assigning rapier wit to those brandishing rapiers with sinister intent.

The intent for those nine Flagstaffians who chose to spend a cool, crisp late November day indoors poring over page after onion-skinned page of the weighty The Complete Works of William Shakespeare was to gain a greater appreciation of dramaturgy and also have a blast role-playing some of the most famous characters — and oft-quoted lines — the world has known.

To be or not to be there on the last Sunday of the month? That is not even the question for the group, none of whom are trained Shakespearean actors, though a few have acted in community theater or hope to one day before shuffling off this mortal coil.

“I acted professionally until I was 17 years old — but not since then — and I love theater and love language,” said Kayla Rigney, who read several roles, including Rosencrantz (or was it Guildenstern?). “Plays need to live, and they live when you verbalize them. To hear the language spoken is key. When you read Shakespeare by yourself, you don’t hear other people’s laughter, and it’s the laughter that makes Shakespeare special, in my opinion.”

The goal for Todd Barnell, a member of the Flagstaff Shakespeare Festival board who facilitates the monthly event, is to bring Shakespeare to the masses through active engagement. These aren’t professional table readings; there is no pressure to perform. Sometimes, people will flub lines or miss cues or mangle pronunciation of an archaic terms, but no one cares. They power on through, regardless. Some participants recite their lines with gusto, emoting for the back rows of the imaginary Globe Theatre; some shy types barely read above a mumble.

It’s a judgment-free zone, the only requirement being a love for the Bard.

“There are ‘Shakespeare Allowed’ groups all over the country,” Barnell said. “We’ve had ours for about a year and a half. For a lot of people, it’s a really good introduction to the works. We’ve had people from all walks of life (participate). Tow truck drivers. Paralegals. Students. Businessmen. There’s one young woman in high school who gets her parents to drive her all the way from Phoenix to read here. She was Henry V for us.”

Shakespeare buffs are known to be avid. Some have come to the Bard late, though.

“You know, they made us read this stuff in high school English class, and people resented it, so they just phoned it in,” said Brad Garner, who portrayed Hamlet at the reading. “So, I thought, it’s pretty cool that people are voluntarily wanting to sit down and read Shakespeare.”

Read it? Garner brought the title character to life. He gave one of the more animated performances — yes, he’s done a little community theater, but never Shakespeare — punctuating his soliloquies with pained or bemused facial expressions and orchestrated gesticulations.

When it came time in the graveyard scene for Hamlet to grab the skull of an erstwhile friend and famously intone, “Alas, poor Yorick? I knew him, Horatio, a fellow of infinite jest …,” Garner raised his hand just like Sir Laurence Olivier (or Kenneth Branagh) would have done.

At other times, people felt compelled to break character and stop a scene.

In several instances, discussions ensued because participants had different editions of the play, dueling Oxford and Cambridge translations, which gave lines supposed to be spoken by 9-year-old Xiaolong Guo (portraying the “gentleman”) to Jo Rohrbacker (portraying Polonius). At another juncture, Mark Byrnes, reading Claudius’ role, stumbled over the obscure word, “cicatrice” (a scar). People helped him out.

“I do notice,” Byrnes said, “that after missing a few (meetings), your tongue can get tied a little more. I have to retrain my mouth.”

No one noticed, or cared. It took two hours to read through the final three acts — and systematically kill off all the characters. But, by the end, all the “actors” seemed ready to tackle the next classic.

The monthly readings of Shakespeare's plays at the Flagstaff-Coconino County Public Library will take a hiatus in December for the holidays but will resume early in 2020. For more information, go to https://flagshakes.org/shakespeare-allowed.