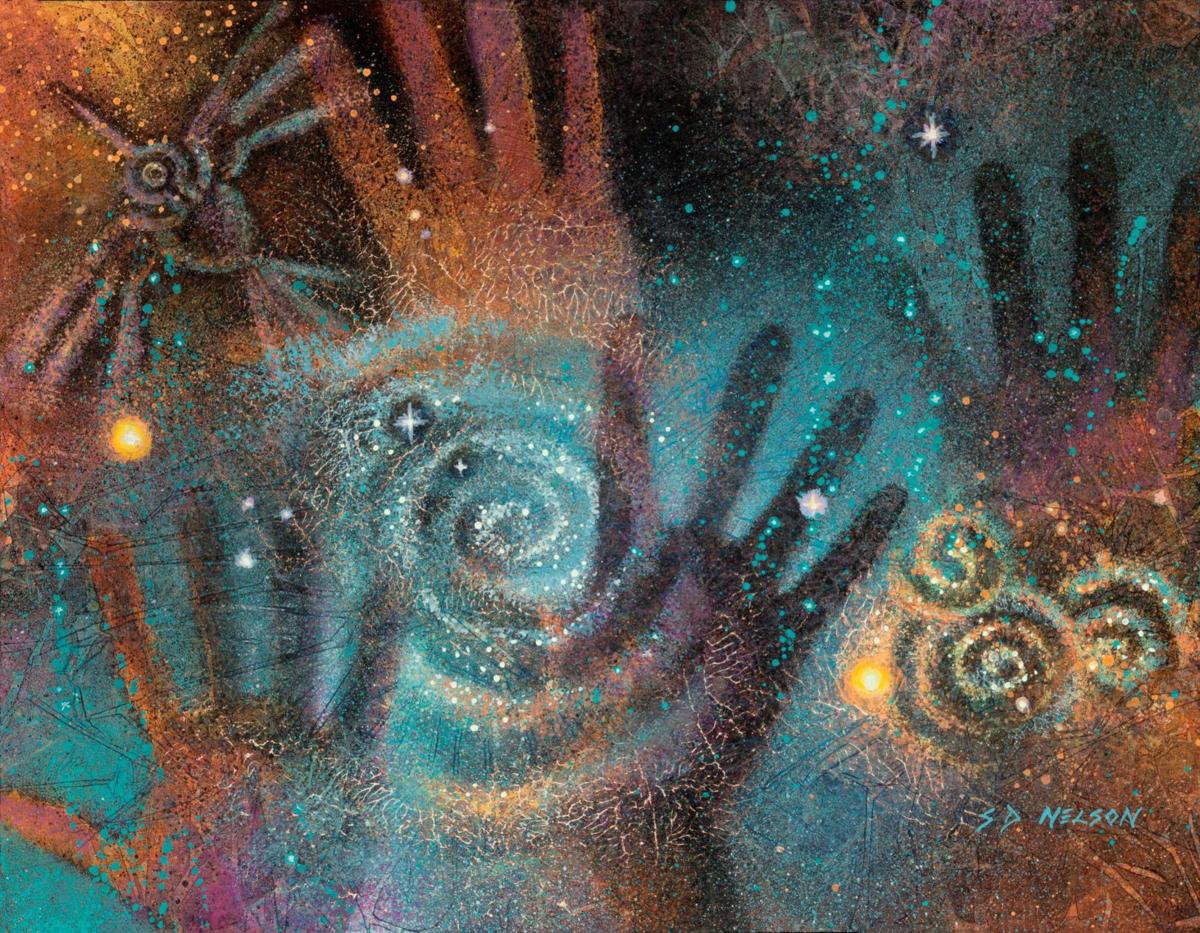 'Beyond the Many Stars' by SD Nelson. Photo by Tom Alexander. 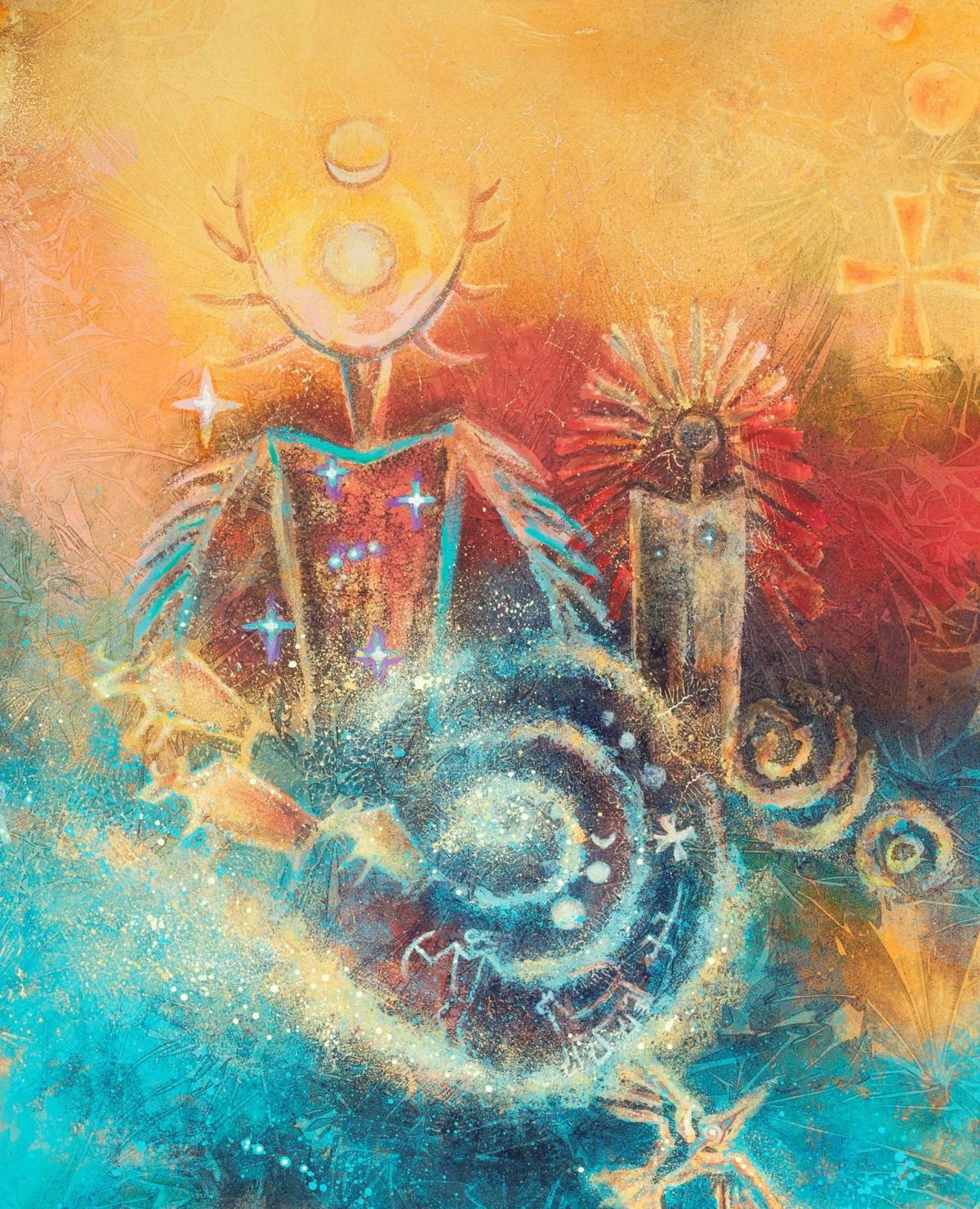 SD Nelson is a man of happy accidents. As a horse charges like a cannonball across expansive prairies, he saddles up and rides, following his heart into enchanted stories in person and in paint.

His detailed pictorials — meticulously crafted with layers of sponged texture and plenty of emotion — speak of his Lakota ancestors born under starry skies at the Standing Rock Reservation in South Dakota. And his paintings, too, represent the cover of night, and will again during NightVisions 2017.

The program resumes June 13 through July 29 at the Coconino Center for the Arts, 2300 N. Fort Valley Road. A public reception will be held Thursday, June 15 from 6-8 p.m. Two satellite exhibitions will show in both the Jewel and Hidden Light Galleries at CCA.

Whereas “NightVisions” inspires viewers to check their fears of darkness at the door, and reimagine their relationships with the night sky, Nelson, too, found that spark growing up in the Midwest Plains. But it wasn’t until he headed west to Flagstaff in the late 1970s that he really came to understand the power of night.

While exploring farther into the Sierras, Nelson set up his pup tent on an isolated mountaintop. In the middle of the night, he crawled from the tent, and felt compelled to duck out of the way of the stars.

“As I got up I had to duck because the stars were so intense I thought they were going to hit my head,” he said with a laugh. “The physical presence of the stars was something that’s still here in the West. It’s a wonderful experience to see the stars and look into infinity.”

When Nelson tells a story, his passion and emotive movements draw in listeners like a moth to campfire light while his paintings, crafted with brushes, sponges and even cellophane, share in equal efficacy.

When it comes to “NightVisions,” he will lend a voice to the night alongside 38 contributing artists spread across the country from Cambridge, Mass., to Portland, Ore. However, as Flagstaff Arts Council Executive Director and stand-in juror for this exhibition, John Tannous, noted, the majority of the blindly selected entries were created right here in Flagstaff.

And for Nelson, his work is born of place, snaking from the Dakotas and beyond, each revealing a layered tale bathed in fiction and truth. For instance, Nelson’s series of beautifully written and illustrated children’s stories combine two recurring motifs: the night, and the traditions of his Sioux ancestry.

“The stars in the story come to life, and the story has a happy ending,” he said of his book, “The Star People.” “There’s drama, excitement, there’s danger. But the two children who are the main characters have a connection to their grandma who died the year before, but her spirit still lingers in the stars and rescues them.”

Threads in these books tie into his own childhood. He remembers back to the summer of 1959, when his mother, brother and sister were visiting their grandmother on the Standing Rock Reservation. In the backyard, like any other summer eve, Nelson was staring into the cosmos.

These stories present across cultures, he added. And in this he shares his own, offering connective points between his own stories and the viewer, to restart memories and offer educational moments inspiring viewers to turn down the lights and embrace the cover of night.

“I think the best way to tell stories, from my personal experience, is not with books but with just with a couple of kids sitting around a fire at night,” Nelson added. “Because we can’t all just sit around a fire at night under the stars, I hope my paintings have that same kind of a feeling. I hope that through me they reconnect and make an indirect connection to how I feel about the stars of night.”

"Night Visions" runs June 13 through July 29 at the Coconino Center for the Arts, 2300 N. Fort Valley Road. A public reception will be held Thursday, June 15 from 6-8 p.m. Two satellite exhibitions will show in both the Jewel and Hidden Light Galleries at CCA.

First teaser trailer for ‘Lightyear’ with Chris Evans is here

How Ina Garten blew off the Food Network: 'Lose my number'

How Ina Garten blew off the Food Network: 'Lose my number'

'Beyond the Many Stars' by SD Nelson. Photo by Tom Alexander.