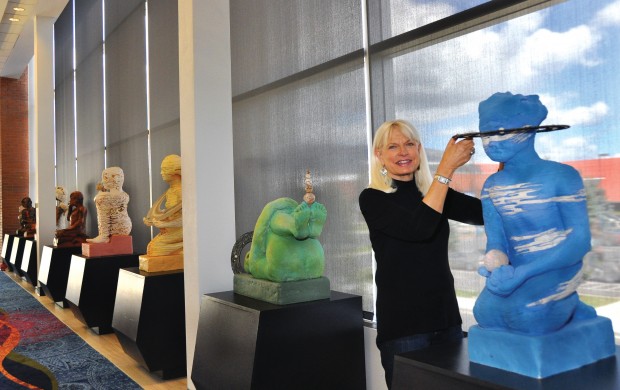 Paula Rice, professor emeritus at NAU, adjusts the ring for Neptune, one of nine sculptures in The Planet Series, which will be on permanent loan for display in the newly remodeled Ardrey Memorial Auditorium. Rice is pictured Thursday afternoon inside the lobby where the planets are lined up in planetary order. Betsey Bruner/Arizona Daily Sun 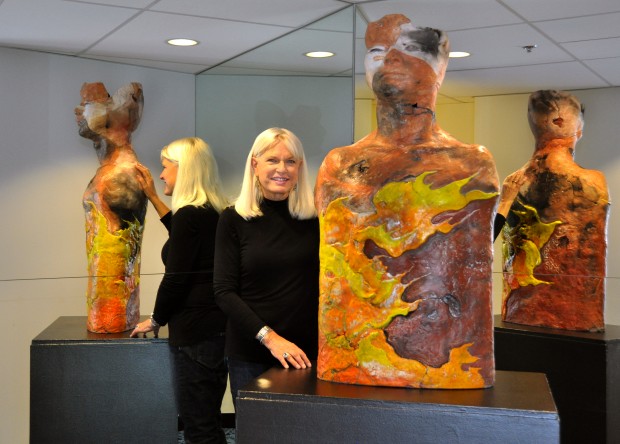 Ceramic artist Paula Rice stands beside her work Tribute/911 that honors first responders to the Sept. 11th tragedy. The piece resides in a special mirrored niche upstairs at the newly remodeled Ardrey Memorial Auditorium and was first seen by the public during the gala reopening Saturday night. (Betsey Bruner/Arizona Daily Sun)

Paula Rice, professor emeritus at NAU, adjusts the ring for Neptune, one of nine sculptures in The Planet Series, which will be on permanent loan for display in the newly remodeled Ardrey Memorial Auditorium. Rice is pictured Thursday afternoon inside the lobby where the planets are lined up in planetary order. Betsey Bruner/Arizona Daily Sun

Ceramic artist Paula Rice stands beside her work Tribute/911 that honors first responders to the Sept. 11th tragedy. The piece resides in a special mirrored niche upstairs at the newly remodeled Ardrey Memorial Auditorium and was first seen by the public during the gala reopening Saturday night. (Betsey Bruner/Arizona Daily Sun)

Visitors to the newly remodeled Ardrey Memorial Auditorium can pretend they are the Sun as they walk up the ramp at the north entrance of the building, because when they walk through the lobby, they will pass the Planet Series, nine clay sculptures by ceramic artist Paula Rice.

Saturday night, the nine pieces made their most impressive debut as featured artwork on special pedestals along the lobby windows at the grand gala for the reopening of NAU's Ardrey Memorial Auditorium, which also included special performances by musicians from the School of Music.

"I'm just speechless," Rice said. "What could you have that could possibly be better than having a beautiful place for your work that thousands of people can see?"

Rice, who was on the NAU faculty since 1987, recently retired from the university as a professor emeritus to spend more time creating her art and educating a wide audience about her work.

She has been interested in the human connection to the universe for years and, after four years of work, completed the series in 2009.

The artist based her depictions, which are all figurative interpretations of planet personalities, on various images from the Hubble Space Telescope.

Ranging in weight from about 20 to 80 pounds, they also have strong personalities.

Take Pluto for example: Made from polished white stoneware, Pluto -- cold, small and far away -- has icicles forming on his toes.

The series was first displayed in August 2009 at the Rotunda Museum on the grounds of Lowell.

Through the years, the Planet Series, which really needs to be seen as a unit, was also shown in Phoenix and at the NAU Art Museum, but it has been very difficult to move the heavy pieces around to venues for viewing.

Rice said with a laugh that her pieces are the "new decor" for Ardrey.

"I'm told they designed the lobby around my Planet Series, and I'm highly honored," she said. "It is an amazing sight to see them lined up by the windows. I'm very joyful about it."

A new custom-made Korean carpet in the lobby even matches some of the colors in the planets pieces.

"There are big medallions that look like cosmic images in the universe, spiraled with blue and yellow and peach to match different planet pieces," Rice said.

Rice's work is part of a new vision for the remodeled Ardrey as a gallery space to bring renewed attention to a wide range of art, a kind of multi-disciplinary approach.

"Ardrey is a gathering place for the performing arts -- why not feature visual arts as well?" said Michael Vincent, dean of the College of Arts and Letters.

The future art pieces could be placed in the auditorium lobby, or on a large wall in the lobby, as well as other places throughout the hall, said Vincent, who spearheaded the movement to bring more of the visual arts to Ardrey.

Kathy Battali, senior program coordinator for College of Arts and Letters, said that with features such as the lighting of the lobby and how it will be seen from the NAU campus, the intention is to bring a greater audience in from NAU, as well as more folks from the Flagstaff community, all to celebrate the arts.

Other artists have their work displayed in time for the reopening event.

Greg Glau, director of English Composition at NAU, has a photograph, "My Secret Meadow," printed on the walls surrounding the Central Ticket Office on the first floor. A beautiful green, lush scene of a Flagstaff meadow, the image was blown up to cover the walls like wallpaper.

In the lobby of the auditorium, the donor wall is an artistic representation of the Flagstaff community, made with wood, Plexiglas, and bright colors. It was created by renowned artist and Arts and Letters Advisory Council member, Mary Shindell.

There are also discussions taking place on a commission for a permanent art glass installation in the hall.

The charming and engaging planet figures will go far to engage more viewers.

Depicting planets as humans is not a new idea, Rice said.

"People have been doing it for years," she said. "We have a right to look at ourselves this way -- we're made out of the same star stuff."

"Uranus is a methane-gas green color," Rice said. "He has five large moons and a ring system with many, many moons."

The other planets also have distinct personalities, like pock-marked Mars, who is depicted sipping water out of his hand.

Venus is inhospitably hot, with red-searing eyes and lava flowing out of her body. Mercury and Pluto are childlike, while Neptune has a bright-blue glaze, and Saturn cradles its rings in its hands.

Jupiter is shown with his moons: Io, Europa, Ganymede and Callisto.

Earth, the first to be made in the series, has legs crossed and is covered in swirling clouds.

Rice used various firing techniques for her planets, using different ways to fire the clay depending on the landscape of each planet.

In her mission statement posted with her work at Ardrey, she explains her goal: "There is in me something that seeks out there in space something like me, like us, an original response. But photographs of alien landscapes are fierce, hostile and silent. My art is a way for me to bridge the gap. The Planet Series is a way for me to grapple with a vast reality, to somehow make sense of it, to add the human element and bring it down to human size."

The series is set to be on permanent display at Ardrey, along with another work by Rice, the fiery Tribute 9/11 sculpture that is set in a mirrored niche on the balcony level of the auditorium.

It is the torso of a man and stands about 4 feet tall.

"It is in honor of the 9/11 first responders, an abstract male figure with brightly-colored, glazed flame images on its surface," she explained. "It's got more height than any of the planet pieces," she said. "I also thought it was a very powerful piece. It's been sitting in the back of my studio all these years."

The planets were also stored in Rice's studio in Flagstaff for years until finding this permanent and ideal home.

Rice, who said she likes creating art but not marketing it, was not looking forward to hunting down future homes for the work.

Clearing out her studio has given Rice inspiration and space to start fresh work, including continuing her porcelain series inspired by two-month sabbatical in 2009 in Jingdezhen, China, a small city with a 1,700-year history of producing quality pottery.

It is considered the porcelain center of the world, Rice said.

"Now I can make more work, and my older work is exactly where I hoped it would be," she said.

To see more of the work of Paula Rice, visit www.paulariceartist.com.